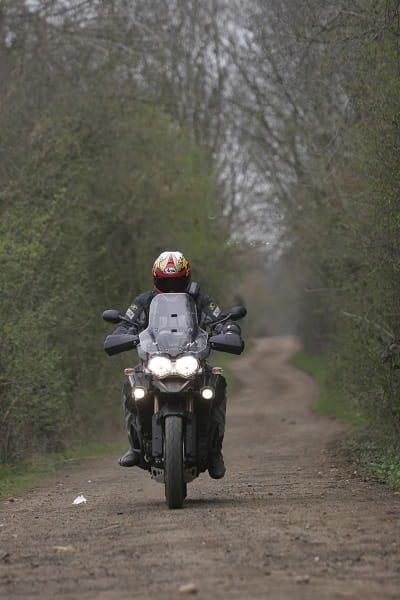 But not content with stirring up the class and taking massive sales and numerous group test success, Triumph has updated the bike with a host of options and called it the Tiger Explorer XC. It needs too because this year BMW has a new R1200GS, fresh from the ground-up, and KTM has a new 1190 Adventure, again, an amazing bike and all of them going after the same piece of gravel on the salesman’s floor.

The Tiger Explorer XC uses the same 136bhp, 1215cc three-cylinder motor, proven chassis, 20 litre tank, mile-eating comfort, shaft drive, and the sophisticated electronics package which includes fly-by-wire throttle, ABS, and traction control. But with the XC you get a whole does of manliness and a new attitude for the Explorer.

It’s one hell of a bike as standard, and has never suffered from looking less than the kind of bike which would scare children and equip you for riding round the world should one require, but with the XC you now get:

The effect, along with the XC’s Khaki green Steve McQueen Escape-esque paint, gives the bike a much tougher look, and leaves other motorcyclists in no doubt that if there was a more masculine Triumph in the range, you’d already have it. With the engine bars, it looks like you could drop it off a cliff and it would just laugh before firing up and riding itself off into the distance. If they need any extra bikes for the new forthcoming Mad Max film, the Explorer 1200XC should be it. 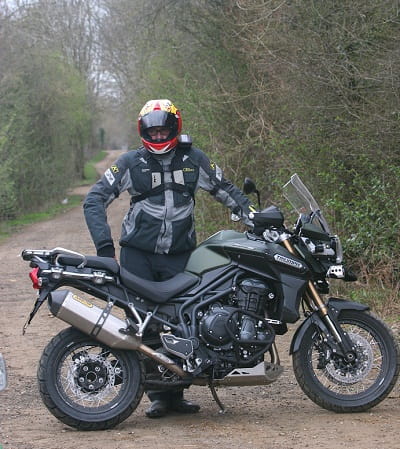 It’s tall is the Triumph, and with a 19 inch front wheel, a high-up riding position and tall suspension it’s always going to have riders on tip-toes. Thankfully, I’m six foot four so never struggle, although lower seat heights are available.

On-board there’s an awful lot of bike. It’s wide. The adjustable screen is wide, and the 20 litre tank is all-encompassing.  The clocks feature every kind of odometer, fuel gauge, fuel economy, clock, settings to adjust the traction control and turn the ABS on or off. There’s not a lot this bike doesn’t have and it feels every bit adventure spec. After spending a few weeks on a sports bike, it feels  a bit unwieldy at low speeds, but don’t let that put you off. Once you’re on the move and get your head round the 259kg (wet weight)  beast,  the Triumph is well balanced. 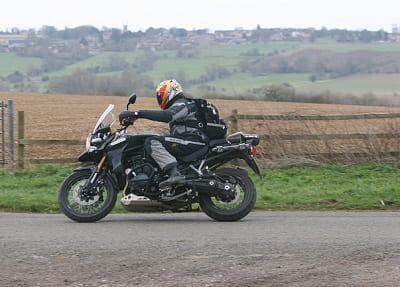 The motor is the same as the standard Explorer and the 1215cc triple hooked to a maintenance free shaft drive, give ludicrous amounts of torque from low revs. It makes 89 ftlb of torque at 6400rpm, and 135bhp at 9300rpm. What that means is you can ride it like an auto, and the shaft drive is so smooth and doesn’t interfere with the way the bike rides that I almost forgot to change gear occasionally.

Round town the power is instant, it takes a little while to get used to the very light fly-by-wire throttle, and on back roads you can change up early and use the torque. I’ve said it before, but it feels  a little harsh when you rev it and a bit vibey. But use the torque and you’ll be pleasantly surprised by how quickly you can make progress without causing any stress to the big lump.

Our test bike had an aftermarket Arrow can fitted and this only adds to the aural pleasure of the three-cylinder roar.

On the move, the suspension is well damped, and despite its size the bike can be steered into a corner quickly, using the long, wide bars to gain extra leverage. The Metzeler Tourance tyres never seem bothered by anything you throw at it, and give reasonable grip even on a dusty trail. Off-road is the only time you ever really need to play with the traction control, and if you get the lights flashing on the road warning you that it’s cutting-in then you’re riding the wrong bike! The ABS system is more than adequate and only in the wet when you need to grab a big handful do you actually realise the ABS is cutting in.

It’s a heavy old beast, the new and similarly equipped BMW R1200GS Enduro weighs 238kg wet compared to the Triumph’s 259kg wet weight,  but can more than tackle a lightly gravelled off-road trail. I’ve taken Explorers on gentle trails in the past, and the Explorer XC coped with gentle trails for pictures, but I wouldn’t fancy taking it through deep mud unless you were incredibly well skilled off-road. 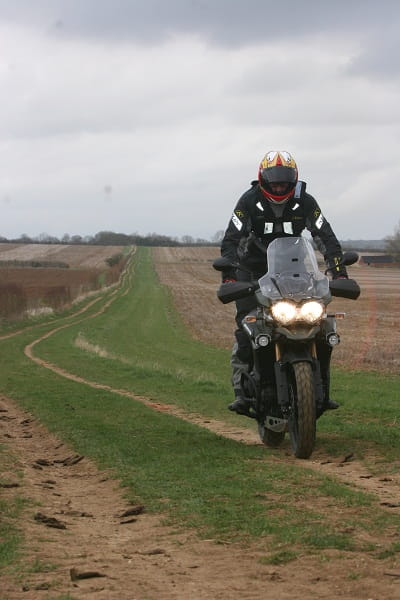 The Explorer XC is more of a tweak to the attitude of the bike than anything that really affects its performance, handling, or braking. But if you do fancy an Explorer it’s probably worth paying the £12,139 for the XC as the accessories fitted to it alone would cost more if you bought them individually. The standard bike is £11,199 and available as an option with spoked wheels for £11,499. To give you an idea, the BMW R1200GS Enduro which features similar spec to the Triumph Explorer XC costs £12,435.

Is it as good as the new BMW R1200GS or KTM Adventure now they’ve been relaunched for 2013? Not quite, it’s not as fast as the KTM, and the BMW is much lighter, but as an all-round adventure bike with massive presence, the Triumph is one of our favourites.

Insure your Triumph motorcycle with Bennetts!