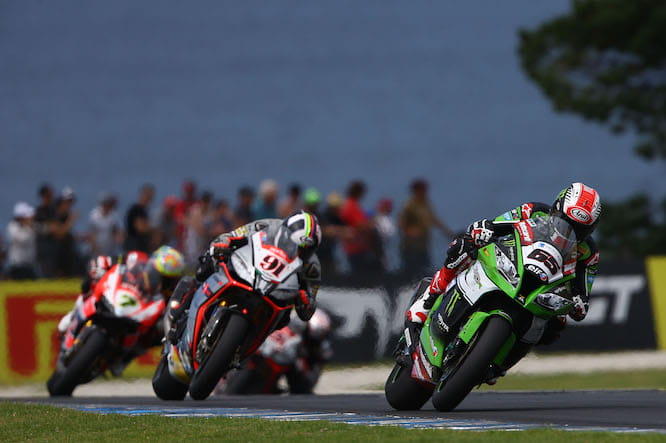 The 2015 Superbike World Championship got off to an epic start with two titanic battles in Sunday’s races which saw Jonathan Rea take his first victory with Kawasaki and Leon Haslam win his first race since 2010.

A rocket start in race one saw  Rea take the lead off the line ahead of Haslam and Chaz Davies. Tom Sykes made a strong start from the third row to slot into fourth.

Michael van der Mark squeezed Sykes into turn one for fourth on the fifth lap, running the Brit wide onto the grass before rejoining in tenth.

After six laps, Davies slipped past Haslam into second and began to put pressure on race leader Rea. Recovering from his earlier mistake, Torres took fourth from van Der Mark on lap seven.

Haslam reclaimed second from Davies on the ninth lap with everything closing up at the front as Jordi Torres looked to join the leading group.

The lead changed for the first time on lap thirteen as Haslam slipped up the inside of Rea into turn one, but the Ulsterman fought straight back the following lap. By this point, Torres was on the back of third-placed Davies.

Haslam fought back on Rea into Honda Hairpin but a mistake at Siberia turn saw him lose out once again. A further mistake for the Brit on lap fifteen saw him drop back to fourth after a brief excursion on the grass.

Recovering well from his mistake, Haslam re-gained his podium spot with five laps to go but the battle ahead was now a over a second down the road. Setting the fastest lap of the race, the gap was soon diminished the Derbyshire man barged past Davies into second place with two laps to go but the Welshman fought back at Lukey Heights.

Making use of the RSV4’s speed, Haslam slipped past Rea onto the straight on the final lap but Rea blocked the Brit into turn two. A tenacious Haslam wasn’t giving up as he re-took the lead into the Honda hairpin, Rea fought back instantly and despite Haslam looking round the outside at the final turn, the Kawasaki crossed the line first ahead of Haslam and Davies. 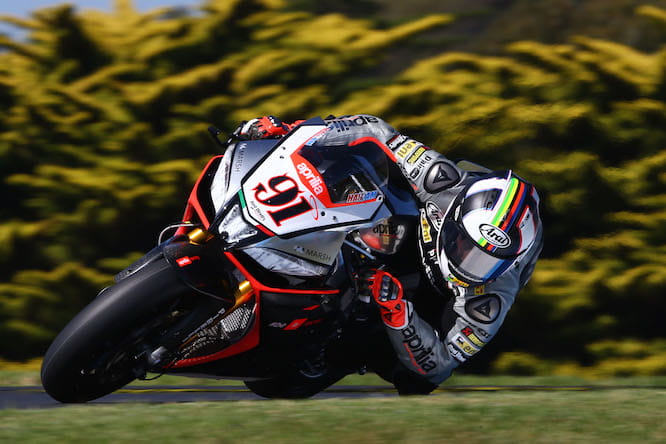 Rea once again took the holeshot in race two ahead of Haslam and Chaz Davies n third. Michael van der mark sat in fourth on the opening lap ahead of Tom Sykes and Jordi Torres.

Haslam ran slightly wide on the fifth lap allowing Honda’s van der Mark through into third position but keen not to lose ground, the Brit immediately fought back.

Aprilia’s top speed once again came in handy for Haslam as he shot past Davies into second place, with the Welshman losing out to van der Mark for third just a corner later.

Haslam took the lead from Rea into the eighth lap but had van der Mark on his tail, the Dutchman sneaking past into the lead through Stoner’s. Rea had dropped back to fourth position by lap nine as Davies resumed a podium spot.

Haslam moved back into the lead on lap thirteen, grabbing the advantage from Michael Van der Mark as Jonathan Rea slipped back into third position before also displacing the Dutchman. The reigning World Supersport Champion fell further back as Chaz Davies took third from him into the start of lap fourteen.

Jordi Torres crashed out at of fifth position at turn one on lap as Rea made his move for the lead. The lead changed again on lap twenty as Davies made use of the Kawasaki’s slipstream down the straight. After leading the race early on, van der Mark crashed out at the MG loop.

Once again the Aprilia speed worked for Haslam as he shot back into the lead on the penultimate lap with the three-way battle for victory heating up.

Haslam lead into the final lap with Rea and Davies close on his tail. Rea made his move into Lukey Heights. It looked impossible for Haslam to win but an incredible drive onto the straight saw him clinch victory by 0.01 seconds.