Yamaha T7 concept to go on sale within 18 months 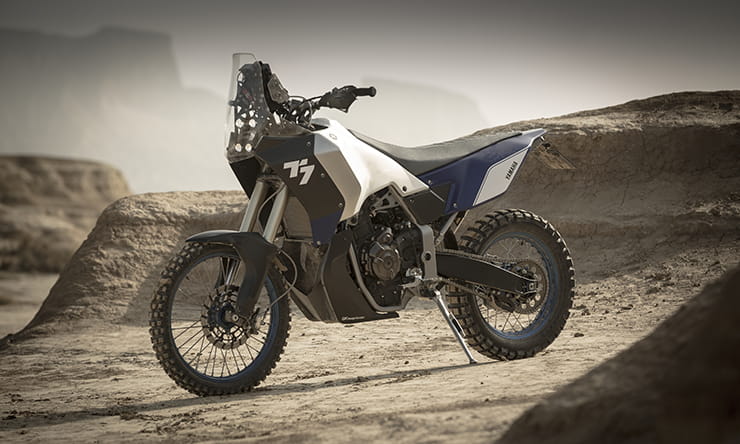 Yamaha unveiled a new T7 adventure bike concept at last week’s Milan Show, and insiders we’ve spoken to say that the new Tenere replacement is likely to be on sale within 18 months.

Insiders tell us that Yamaha is running the bike alongside Honda’s brilliant CRF1000L Africa Twin in testing too, a bike that has quickly established itself as the go to adventure tourer for riders wanting to go on and off-road.

The T7, or new Tenere, as insiders are already calling it, is designed to go where bigger adventure bikes may struggle.

Describing the new T7 Concept as ‘a new destination for adventure’ in the press material and YouTube video (below), the new T7 Concept is set to replace the much-loved Yamaha XTZ660 Tenere in adventure riders’ hearts when it finally makes it on sale in 2018.

The Tenere is one of the most successful Dakar bikes of all time, and in factory race spec was raced by legendary off-road warriors like Stefan Peterhansel to massive success in the Dakar.

The Tenere was launched 33 years ago and went on to sell an incredible 61,000 bikes between 1984 and 1994. Even today the single-cylinder 660cc bike is still remembered as an accomplished round the world choice for serious adventurer. Yamaha sells the XTZ1200 Super Tenere but has a big gap in its range. They may be more road focused than this concept, but Suzuki has the V-Strom 650XT and Honda has the NCX750. Both are big sellers for the Japanese firms.

Taking the Tenere’s spirit and bringing it alive as the T7 Concept, Yamaha said: “Many existing mid-size adventure models are perceived as being too road oriented and too sophisticated, and are unsuited to real off road riding. The adventure world needs a new kind of motorcycle that can offer the genuine long distance versatility and pure durability of the original Ténéré.”

The bike is being developed by a combination of Yamaha's engineers, designers and product planners from the official rally team in France, the R&D in Italy and GK Design in the Netherlands.

The specially-tuned 700cc Yamaha CP2 engine started life in Yamaha’s MT-07 but has been retuned for easy power delivery and strong traction in all conditions. An insider we spoke to said the new motor perfectly suits the bike, and they’ve been impressed with just how good the engine is in this guise.

We had a sniff round the bike at the EICMA Show last week and the frame appears to be closely linked to the WR range of enduro bikes, backing up Yamaha’s claims that this bike will be just as good off-road as it is on road.

The styling is very much like a pukka Dakar bike, and the concept at least comes with an aluminium fuel tank, four-projector headlight, a carbon-fibre fairing and an Akrapovic exhaust system, plus long-travel KYB suspension.

It looks amazing, but we can’t imagine for a minute that the carbon-fibre bodywork will make it to production.