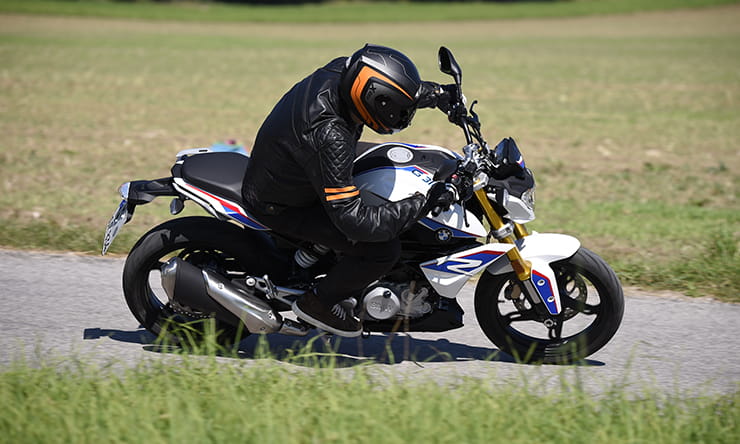 The first modern day sub-500cc Beemer, the first with a backwards-facing engine and the first built entirely in India. The G 310 R is also the bike BMW hopes will spearhead a push into the vast, lucrative Asian and South American markets and take their global sales to over 200,000 by 2020. It’s a lot of ambition for a 34bhp, 313cc, A2-licence friendly roadster. Bike Social rides it at an exclusive launch in Munich.

You might think designing and building a class-leading 200bhp litre sportsbike from scratch would be tough, or the challenge of maintaining global dominance in the highly competitive adventure bike market would be enough of a challenge. But, compared to the importance of getting the humble BMW G 310 R roadster right, all that other stuff is mere child’s play.

Because this is the bike BMW hopes will sell not just in Europe, but carry it into Asia and South America – markets that make Europe and North America bike sales look like a corner-shop compared to a chain of superstores. To do it, the G 310 R must pull off the hardest trick of all – it has to be ultra-keenly priced, but it also has to completely conform to BMW’s brand images of technology, luxury, performance and style. As a result, it’s not a bike BMW could knock out on the back of a fag-packet over a lunch-break.

Although, in bike development time-scales, it wasn’t far off. To keep the price of the G 310 R competitive – and, at £4290, it undercuts its rivals – BMW already knew they couldn’t build it in Europe. So in April 2013 they entered an agreement with TVS in India; TVS are the third-largest bike manufacturer in India, with three plants at home and one in Indonesia, already producing 2.5 million bikes per year. They’re also familiar with foreign partnerships – they had a 20-year tie-up in the 80s and 90s with Suzuki. 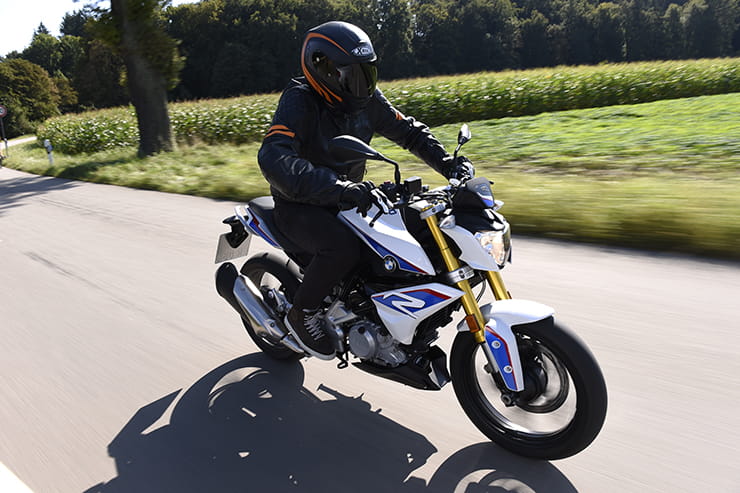 The three years it’s taken to get the G 310 R into production – the lines started rolling in July this year – is a short timescale; especially, suggested a senior BMW source, given their Indian counterparts’ shaky grasp of schedules and deadlines.

But either way, here it is: BMW’s first sub-500cc bike, and their first built entirely outside Europe, using 80% Indian-sourced parts. All the more reason to make sure it conforms to BMW’s standards.

But the G 310 R isn’t completely about emerging markets; it has a role in Europe too, where its novice, sub-A2 licence, lightweight agility, and low purchase and running costs make it ideal about town and for novices – and line it up alongside rivals such as KTM’s 390 Duke, Kawasaki’s Z300, and Yamaha’s MT-03.

Judged purely on looks and finish, it compares very well. The most striking thing about the bike is how little of its budget considerations show. The family resemblance to the S1000R is obvious, but so is the quality of the paint, the depth of the plastics and the finish on components like the matte black bars, the sparkling silver bar clamp, massive top yoke, gold upside down forks, the pillion rails – they all look special. And the components are pretty good too: beefy KYB suspension, the clocks aren’t flimsy Casio items (and the trip also shows remaining fuel range; there are some flagship tourers that still don’t do that); even the fuel filler cap has the same damped flip as operation as more expensive bikes. Only the switchgear looks plasticky – which, as any owner of a big BMW with failed switchgear will tell you, is ironic if nothing else. It’ll probably never go wrong.

Sit on the G 310 R and there’s a considerable amount of suspension squashing as it takes up the strain of a tubby forty-something. BMW’s advert pics all show a petit lady or a Tom Cruise-sized bloke on the bike; more proportionally suitable, but it’s the same for all the G 310 R’s rivals. Importantly, the position doesn’t feel cramped or undersized on the bike; the seat is wide and firmly padded, the bars are within thoughtful reach and pegs where they need to be. 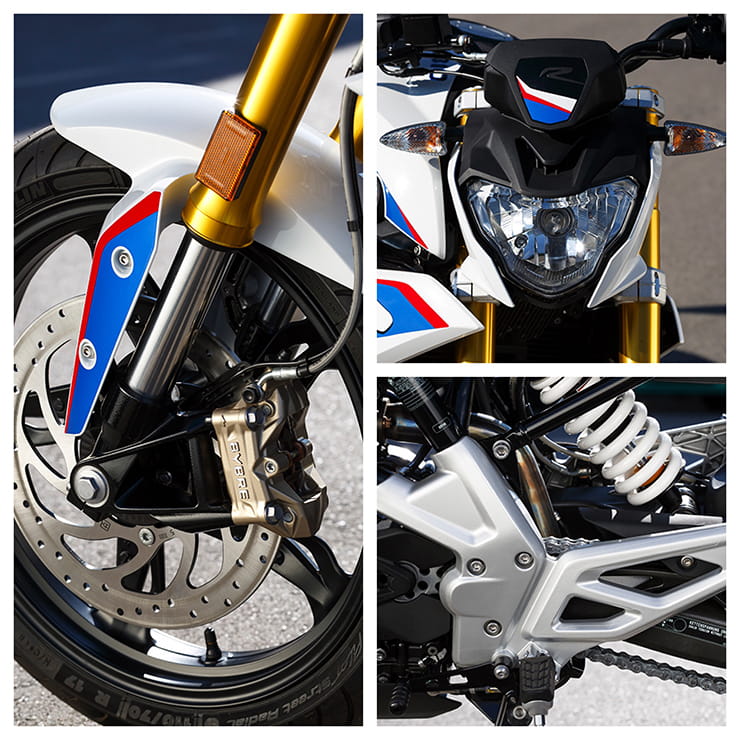 The bike whirs into life so quietly it’s hard, with ear plugs in, to tell it’s started at all. It’s Euro 4 compliant, of course – Euro 4 is the adopted standard across much of the developing world, and only minor changes to the fuelling exist from country to country, to cope with fuel quality. Mechanically, the 34bhp, 313cc four-stroke single is designed with low compression to run reliably on anything from cactus juice to rocket fuel.

Click into first, note the revs creeping across the LCD dash, slip out the clutch and beetle off into the traffic with a decent zip; the bike is light – at a claimed 158.5kg dry, it’s relatively heavy compared to KTM’s 390 Duke at 139kg, and with a full cargo or 11 litres of fuel it’ll weigh more than the Yam MT-03 and Kawasaki Z300. But when the bike weighs so little in the first place, the only compromise will be straight-line performance, not handling; the G 310 R is exceptionally light, very flickable and can duck and dive through traffic with the surefooted agility of an irate cyclist.

The engine is interesting – it’s a backward-facing cylinder, with the exhaust exiting directly back near the rear shock and the intake at the front angled steeply upwards into the airbox located just behind the headstock. The rationale is simple – it makes room to lean the barrel and head backwards, so the motor can move forwards in the chassis, which means the swingarm can be longer for a given wheelbase – and a longer swingarm is good because it gives finer control over the rear suspension (which is directly connected to frame and swingarm, not via the usual rising rate linkage), and which then means either better road-holding (or the facility to use a cheaper rear shock and achieve acceptable road holding). The only drawback to all this is BMW ran out of room for the catalyst, so it sits in the end can and explains why it’s so large.

But the end result is a well-balanced bike with surprisingly good ride quality for its price and size. Bumps are flattened, there’s no chattering or clattering through the bars, and the only time the springs are an issue is on the brakes – hit the front single disc hard and the forks will dive to the stops easily. But ABS is standard – and it’s made by Conti, the same company who supply the S1000 series.

On paper the G 310 R’s motor looks lacking in puff, especially compared to the larger, revvier and more powerful KTM 390 Duke. And it’s fair to say the BMW is not over-endowed with performance despite sharing the same fundamental top end architecture as the S1000 series. We’re talking twin cam, DLC-coated cam followers and four whopping valves – steel, not titanium. But with an 80mm bore, the G 310 R revs out to a heady 10,000rpm redline and makes peak torque at 7250rpm. That’s a lot of revs.

On the road, the BMW hustles through its six-speed gearbox rapidly, shortshifting and keeping the motor on the boil like a two-stroke. Above 5000rpm the engine comes on cam and issues a hoolw rasp from the airbox which, on a bigger motor, would sound impressive but, on the G 310 R, sounds a bit like a farting frog. It actually made me giggle a few times. But maybe that’s just me.

70mph pops up at 7000rpm, which turns out to be handy because it’s where the motor has some torque left for overtaking – 80mph is 9000rpm and although there’s a bit left after that, I wouldn’t rely on it for getting past cars in a hurry. You’ll need a run up.

A big problem for singles of any capacity is vibration – all run at least one engine balancer to smooth them out, and the BMW is pretty good; at 70mph there’s enough to tingle fingers eventually, but it’s hardly numbing, even after a tankful. Which is, approximately, 150 miles from the 11-litre tank (the test ride showed an average mpg of 67mpg). When the tank was brimmed it showed a range of 190 miles so, including reserve, that would be about right. 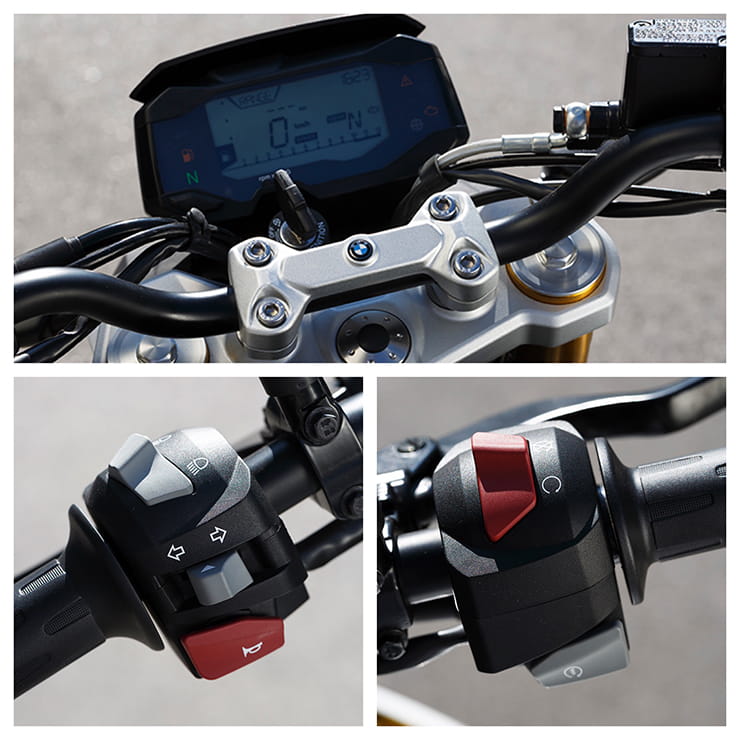 As a BMW, the G 310 R also gets a range of accessories, including a low and high seta height option (can’t imagine who’d need the low seat), a topbox, centrestand (which ought to be standard), LED indicators for the fashion-conscious, a 12v socket and, of course, heated grips. Colours are Motorsport-based white (with an extra cost), red and blue, black and white, or blue. The G 310 R will be in dealers by mid-November.

After a day barging about Munich’s streets with an occasional foray onto twisty roads and a single blast on an Autobahn, the G 310 R impressed me with its ride quality and looks, both of which exceed anything the class has to offer. Its performance is less impressive; it feels like there a slice of S1000 in there trying to get out, but a glut of restrictions are backing it up (the silencer end cap is held on with a pair of small Allen bolts; enquiring minds might go looking for a better sound by having them off and seeing what’s inside).

As to who will buy one, the truth is BMW UK are hoping it could be anyone from an existing premium BM owner (with an RT or GS) who wants a branded runaround for nipping about on – in which case the G 310 R would suit – to ladies and novices looking to join the BMW club on their way to bigger, faster bikes. I nearly added ‘better’ then – but that’s the whole point of the G 310 R; it’s already a BMW, so the theory goes, it should already be as good as any of its bigger brothers. 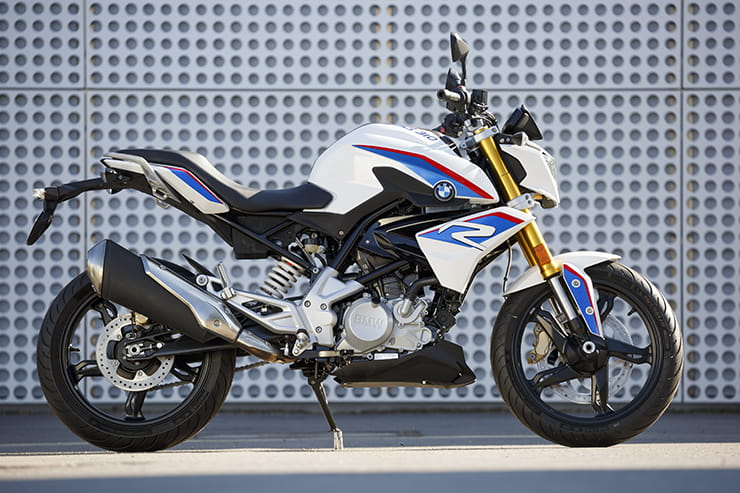