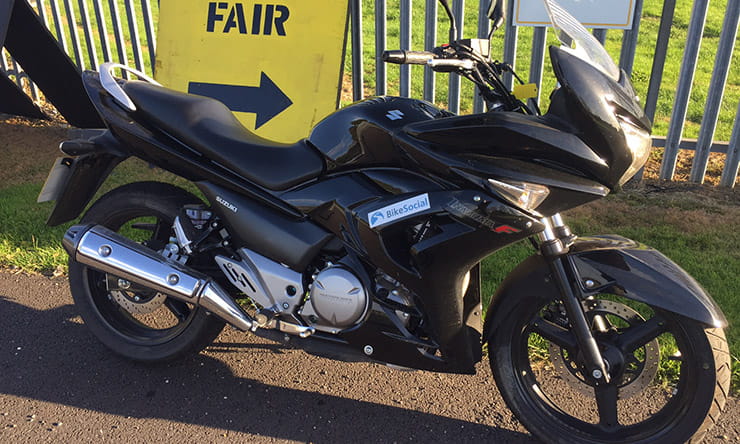 The 250 sector used to be one of the areas that dominated manufacturers’ line ups but those days have long gone. So, why have Suzuki created the Inazuma? Scott Redmond borrowed this example from Wheels Motorcycles in Peterborough and stuck in £15 of unleaded to find out first-hand what it is all about.

There are three versions of this bike to choose from. This one with the full fairing, one with a half fairing and an all singing and dancing one with luggage attached. It’s clear from the start that with only 24 horses beating away at its heart, this isn’t a machine to get your juices flowing like a sports bike can, but forget the mph this bike is all about the mpg.

For many people a motorcycle is their sole form of transport. They ride because it offers them convenience and value for money. List price for this fully fairing model is £3,499 which includes a two year warranty. Running costs are going to be low as the engine is a two cylinder four stroke unit and the Suzuki blurb indicates that 80mpg can be achieved. For those doing things on a budget, it’s facts like these that matter. 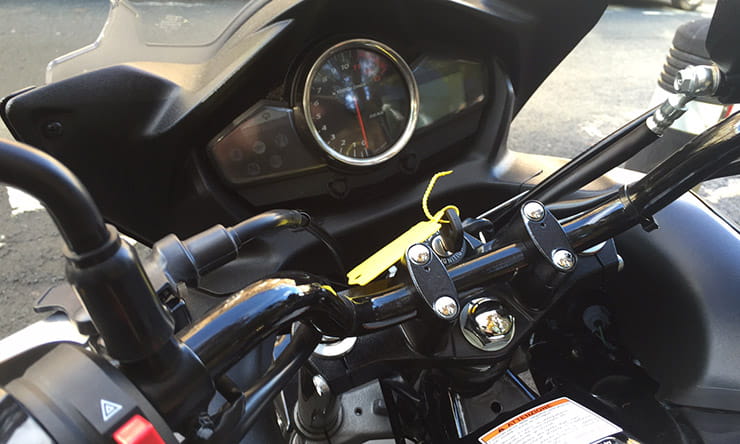 Having fed the tank on the Inazuma with 13 litres of petrol I set off from Peterborough. My rough maths showed me I would have around 200 miles to get to know the baby Bandit until the tank was dry. I headed out of Peterborough and pointed the Inazuma towards London. Life in the suburbs is where this bike would shine. The only downside to my route was I would have to endure 60 miles of the A1 before getting my wheels inside the M25.

After a mile I pulled over. A few stop starts had me convinced that the clutch was not adjusted properly, but after checking the cable adjustment I realised it was perfectly fine. It was my mind set that needed adjusting; first gear is quickly dispatched with and second goes pretty much the same way, delivering me to around 30 mph.

Out on the A1, I quickly get accustomed to the bike. For a small bike it actually feels big, which is a good thing. The seat is plush with plenty of padding and a decent size. The bars are nice and wide, and I really liked the dash with a nice simple rev counter dominating the binnacle. Sometimes less sometimes is more, and on this occasion it most definitely is. The twin silencers will add weight but they look fab and add to the big bike look.

From where I’m sat it doesn’t feel like I’m riding a bike built on a budget. The shine from the black paint reveals a metallic fleck when the sunshine dances upon it. I had plenty of time to get used to the bike. We sat at 70mph for a while, but the Inazuma was really working to do so. There’s a six speed gearbox but the last cog acts more like an overdrive. Every time I clicked it I had to admit defeat and go for fifth again if I wanted to accelerate. Once I’d got to grips with this it made my ride south easier. Stability was also more in keeping with a bigger bike. The steel tube chassis keeps everything in order, even when side winds attack.

Having made it to South Mimms I now felt the Inazuma, which is the Japanese word for lightning, would feel more at home. Winding our way towards the North Circular, our average speed nose dived, mostly thanks to 40mph and 30mph zones dictating our progress. The Inazuma laps this up. That lazy power produced by the long stroke overhead cam twin is perfectly suited to life in the slow lane. Fuelling is also spot on, with no glitches experienced.

I headed to the Ace Café. The A406 was choked with traffic which was exactly what I wanted to sample. The Inazuma was well at home. The fan cuts in at traffic lights, but that's the only huff at dealing with the rat race that is London traffic. Having endured the clogged up arteries of London for over an hour, I was aware that my miles weren’t really increasing. I hit 100 miles on my trip heading east on the A406 but at this rate I’d still be riding in a week’s time. That 80mpg estimation loomed large on my mind and I had to head back out of town. The Inazuma had already proved to me that it’s an excellent city bike.

I left the A406 at Enfield and picked up the A10 northbound. I wasn’t alone as it was now 4pm and rush hour was well underway. I still had plenty of fuel to burn. The Inazuma’s carbon footprint in London was over. I haven’t ridden a small capacity bike for a while, but it’s actually something I suggest you do. It makes you really focus on your ride and riding skills. Maintaining your speed is fun. You read the road that bit further. I was becoming more aware of things like traffic merging from slip roads, avoiding any unnecessary deviations in my speed. The brakes on the Inazuma are a perfect match for the basic suspension; I had no issues with the quality of the ride or their performance. This was also the first new bike I’d ridden that didn’t come with ABS. A moment on a lane later in the day rewarded me with a bit of a skid, another example of how my riding abilities were sharpened by time with this motorcycle.

I headed back across to the A1 and picked it up at Baldock. The road between the A10 and A1 was twisty and hilly, yet the Inazuma felt quite at home with the countless  point and squirt opportunities. From Baldock to Peterborough it’s 50 miles of dull dual carriageway. Having a better understanding of the 250 allowed my return leg to be more enjoyable, the fairing added to the pleasure.

There was still unleaded in my tank. With the sun starting its nose dive to the west my shadow cast grew longer. Eventually the fuel gauge started to flash to get my attention.

Having reached Peterborough I headed off the A1 at Wansford and tried my best to burn the rest of the gas. Shooting along the lanes the Inazuma was still offering me comfort. I had done over 200 miles on the 250 and not once had it felt a chore. I’d learnt things about my riding and was impressed by the machine that carries the budget biking badge. Returning the bike back to Wheels the next day I had 215 miles up on the trip and there was still a splash in the tank. From 13 litres of unleaded that’s pretty impressive.

The looks. For a small bike it looks larger than it should.

Other people’s views. Not one person had a nice word about the Inazuma. 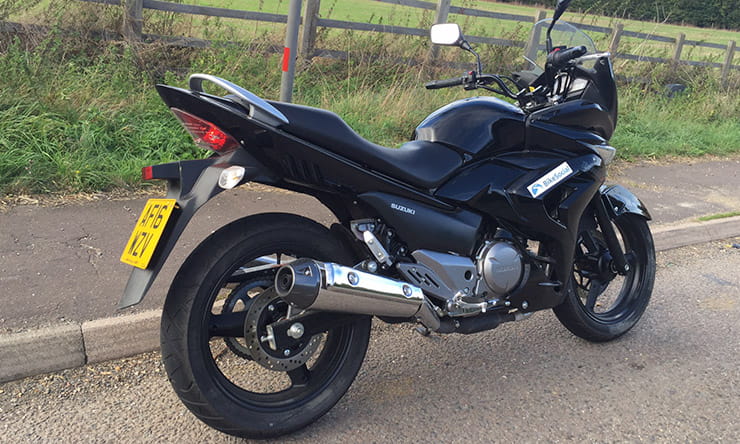