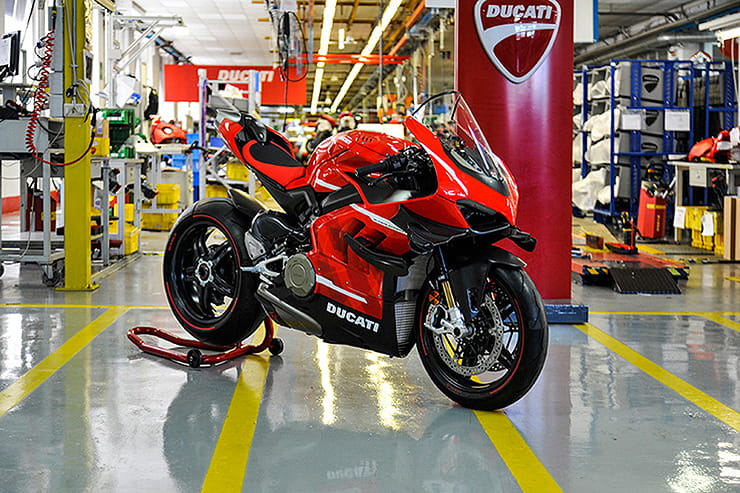 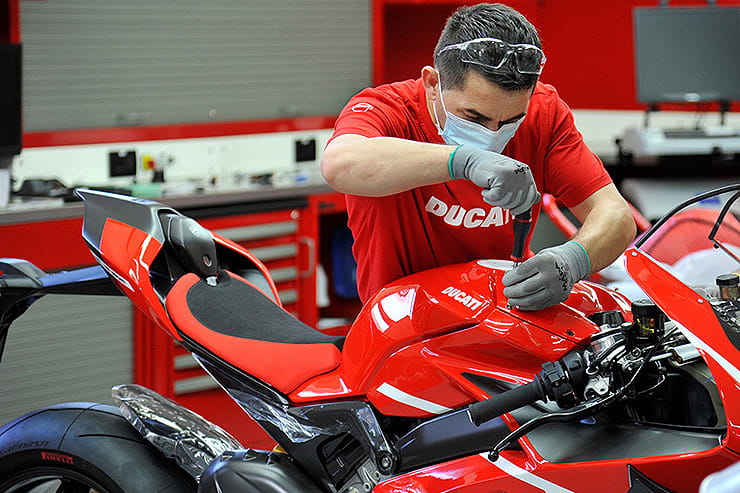 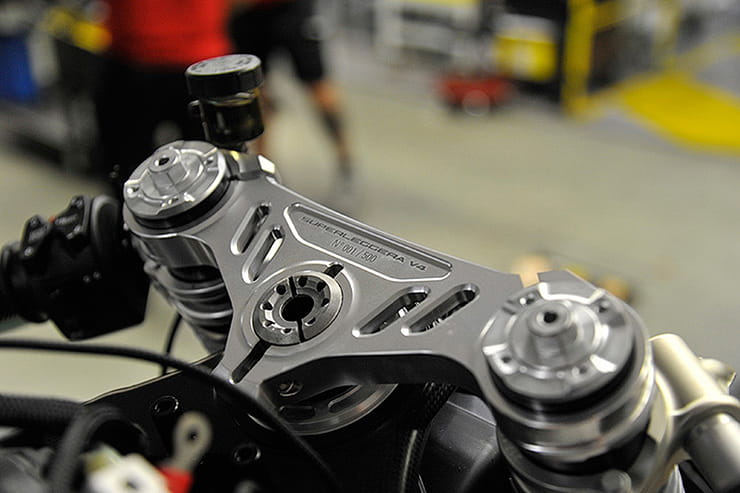 Number 001 of the limited and numbered series of 500 gloriously beautiful Ducati Superleggera V4 costing a whisker under £90,000 has rolled off the production line of the Borgo Panigale plant in Bologna, Northern Italy.

The super-bling Superleggera V4 is the only bike in the world approved for road use with a carbon fibre frame, swingarm and wheels.

The first of the lucky owners has been invited to a delivery ceremony when they’ll meet Ducati CEO, Claudio Domenicali. But not only that, all 500 owners have a chance to test the "official" Panigale V4 R of the SBK World Championship and the chance to purchase access to the "MotoGP Experience and ride the Desmosedici GP bike, though that experience is limited to 30. And there’s a 1:10 scale model of their bike too, individually numbered.

Officially unveiled as a production model at the beginning of February, long before lockdown, the stunning Ducati Superleggera V4 is now rolling off the Bologna production line with the first bike in this special and limited edition run of 500 set for delivery to its owner.

With a power figure of 224hp and a dry weight of 159kg in its road-legal homologated form, the £90,000 Superleggera V4 is the most powerful production road bike ever. The power-to-weight ratio of the “super light” second-to-none.

Adding the Racing kit and 224hp becomes 234hp while 6.8kg is shed too, taking it down to 152.2kg – you could almost bench press it. They say a picture speaks a thousand words (which is no good for journalism) so how about a video feast instead… 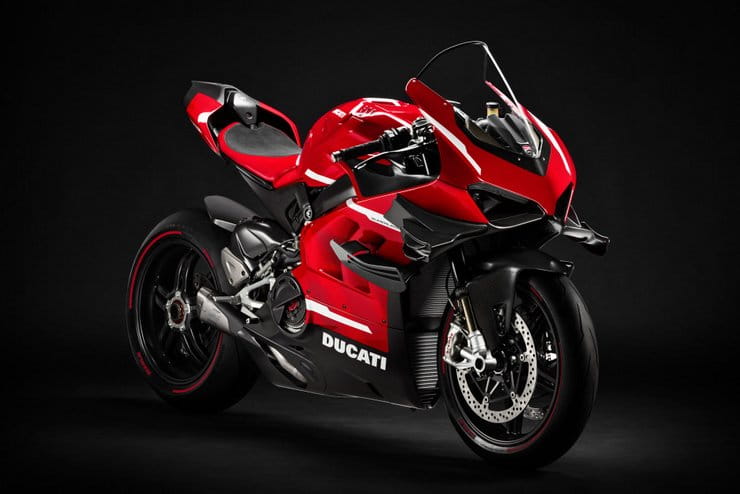 Back in November last year BikeSocial was the first publication to reveal details of Ducati’s upcoming Superleggera V4. Now Ducati has spilled the beans in full on the most exotic road-going motorcycle it’s ever built.

So what’s the fuss? This is the third Ducati in recent years to bear the ‘Superleggera’ tag, and the firm has raised the bar with each iteration. It all started with the 1199 Superleggera back in 2014, a lightweight, highly-strung version of the 1199 Panigale, claiming a dry weight of 155kg courtesy of a magnesium monocoque chassis allied to a peak power of 200hp. In 2017 Ducati upped the game with the 1299 Superleggera. While only a single digit differentiated its designation from its predecessor, the 1299 was a far more extreme machine, bringing Ducati its first street-legal carbon fibre chassis and throwing in a carbon fibre swingarm and carbon wheels to complete the theme. For all that, it was surprisingly 1kg heavier than its magnesium-framed predecessor, although a 15bhp boost to 215bhp more than made up for that.

Now we’ve got the Superleggera V4, which takes the same all-carbon, super-lightweight thinking and adds it to the race-bred V4 engine from the Panigale V4R. 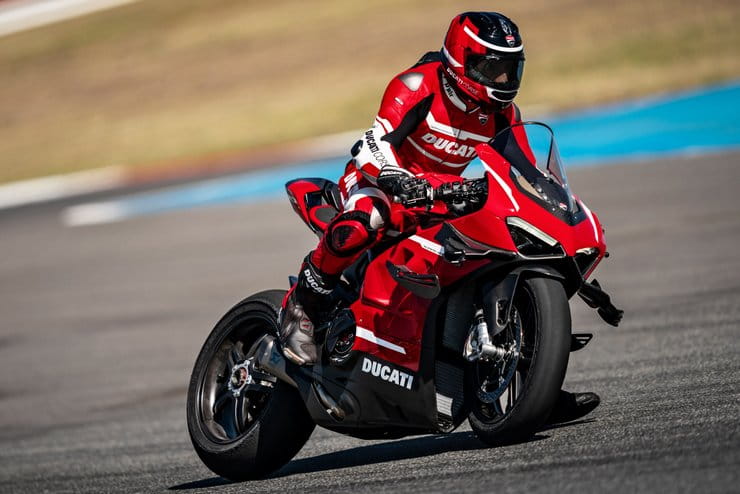 The numbers are worth dwelling on for a moment. Dry weight might be a ridiculous metric – you’ll never ride without fuel or oil – but it’s the term Ducati likes to use. For the Superleggera V4 it’s a mere 159kg. That’s 16kg less than a normal Panigale V4.

What’s more, when you strip off some of the road-oriented kit – mirrors, licence plate cover and catalyst-equipped exhaust – and replace them with track-only parts from the race kit that comes with the bike, the weight drops to a mere 152.2kg.

Although Ducati doesn’t mention the ready-to-ride weight of the bike, its homologation documents show that the kerb weight including fluids is 173kg. That’s impressive given that most mass-made 1000cc superbikes are around the 200kg mark in road-ready form.

Power is similarly jaw-dropping. Ducati tells us that the Superleggera V4 makes 224PS (221bhp) at 15,250rpm, confirming the figures that we revealed way back in November. That’s around 3.6hp more than the Panigale V4R manages from basically the same 998cc V4 engine. The Superleggera’s version achieves its extra power thanks to judicious lightening, with lightweight camshafts and a dry clutch helping to shave 2.8kg from the engine and letting it rev a little more freely. Each engine also has its Desmo valve timing carefully set at the factory, with a specific engineer signing off on each bike so if yours isn’t perfect you’ll know exactly who to blame.

As with previous Superleggeras, the V4 also comes with a track-only Akrapovic exhaust as part of a ‘racing’ kit that’s delivered in a box along with the bike. Once bolted on, it boosts power to 234PS (231bhp). The same box also includes a carbon clutch cover, carbon and titanium swingarm cover, mirror blanking plates, rear licence plate blanking plate and covers for both the head and tail lights. With that kit fitted, and a set of slicks, the bike is claimed to have lapped Mugello in 1:52.45, within 2 seconds of the best time of a race-spec Panigale V4R SBK ridden by Michele Pirro. 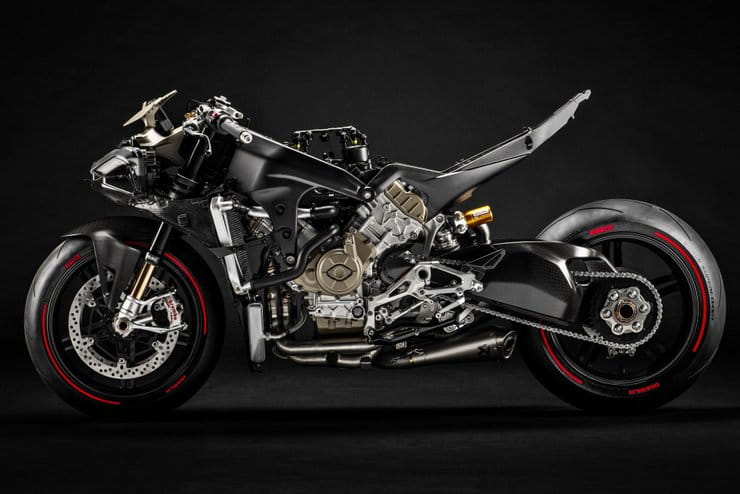 Breaking the numbers down a little, the bike’s weight savings once again come from the use of carbon fibre wherever possible. The main frame is carbon, although its weight saving of only 1.2kg is a testament to how skimpy the stock V4’s aluminium chassis is. A similar weight is saved thanks to the carbon subframe, while the swingarm is 0.9kg lighter than the aluminium equivalent.

The biggest single saving actually comes from the carbon fibre wheels, which chop 3.4kg from the overall mass. That’s all the more significant because it’s both rotating and unsprung mass, implying an exponentially big impact on acceleration and handling. Incredibly, Ducati says the Superleggera’s chain and rear sprocket are a full 1.4kg lighter than the versions used on the normal V4; a bigger saving than the entire carbon-fibre frame!

The bike’s specs also reveal some oddities. Not least, the fact that the engine is only homologated to meet Euro 4 emissions limits, rather than the Euro 5 standards that are supposed to apply to all newly type-approved production bikes from 1st January 2020. That might well explain why Ducati type-approved the bike way back in November last year, when we were able to reveal the first details about it. That also means there’s no way Ducati can keep making the Superleggera V4 in this form beyond the end of this year, as all new bikes sold in Europe from January 2021 must be Euro 5-compliant. 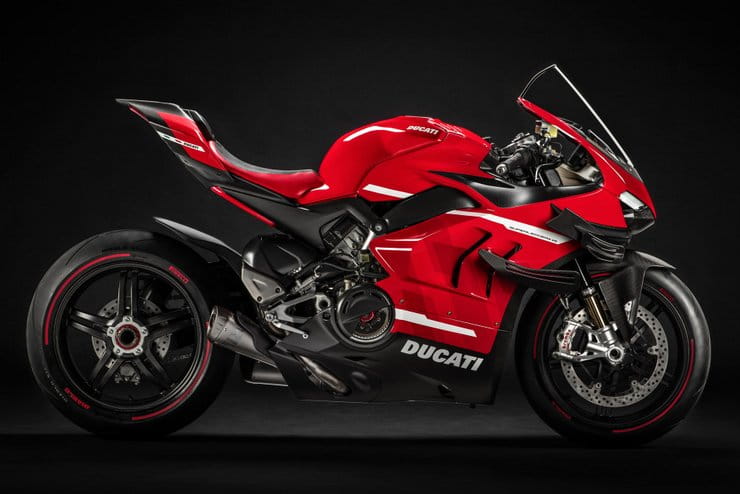 When it comes to the Superleggera’s brakes and suspension, you can probably already predict the words ‘Ohlins’ and ‘Brembo’ are about to appear in this story. You’d be right, of course; Ohlins supplies the NPX25/30 forks and a TTX36 shock, with a titanium spring, while Brembo provides its Stylema R calipers.

On the surface, the bodywork is all made of carbon – of course – and Ducati has upped its aero game with even more extensive winglets than those seen on the Panigale V4R and the latest 2020 Panigale V4. Inspired by the Desmosedici GP16 racer, which was the most extreme iteration of Ducati’s winged MotoGP bikes before stricter aero regulations came into force in 2017, it has biplane winglets that push the front down with 50kg of downforce once you’re doing 167.7mph (270km/h). That’s an impressive 67% increase compared to the Panigale V4R and more than Ducati’s MotoGP machine could achieve in 2019 under those limiting racing rules. 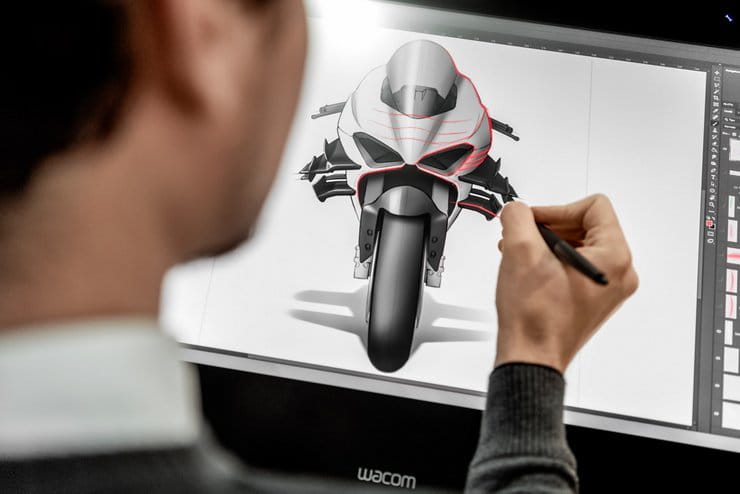 As with its predecessors, production of the Superleggera V4 will be restricted to just 500 examples. In terms of turnover that’s fifty million dollars, so you can see why Ducati is so happy to pander to the desires of the handful of riders wealthy enough to buy such machines. Just five bikes will be made per day and deliveries starting in June for European buyers.

Each owner will also be offered a track test, not on their Superleggera but on one of Ducati’s WSB Panigale V4Rs. Meanwhile, 30 Superleggera V4 buyers will be given the chance to ride a works 2020-spec Desmosedici GP20 MotoGP machine, complete with full support from the team.

The Superleggera’s own on-track abilities are boosted by five new riding modes, each of which can be personalised to suit the rider’s whims. The idea is that each can apply to individual tracks, with the system also remembering the lap and split times for those circuits. In default mode, the tracks are Laguna Seca, Mugello, Jerez, Sepang and Losail; hats off to any owner who manages to tick off all of those on his Superleggera.

Of course, buyers will also be able to spend even more to get their hands on some optional accessories. In this instance, those include special Superleggera V4 leathers, complete with airbag, and a matching carbon-fibre helmet. 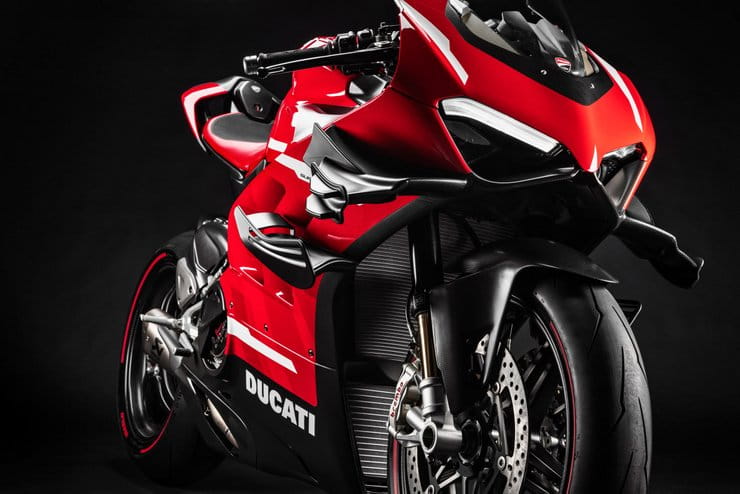