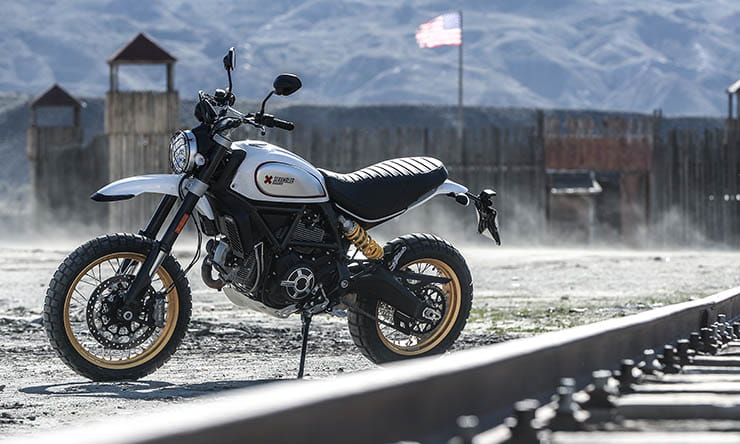 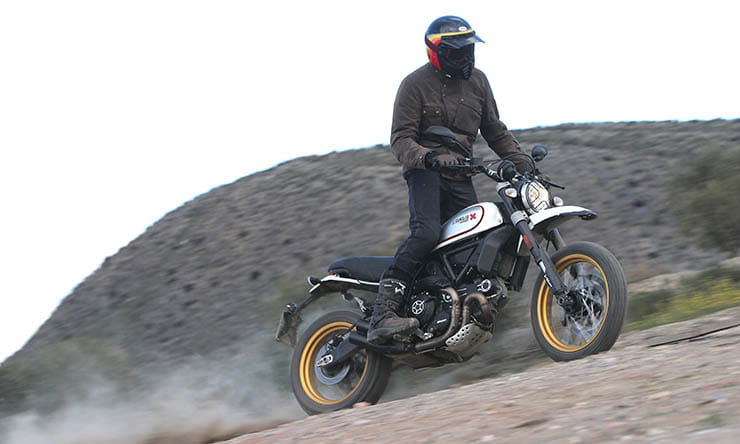 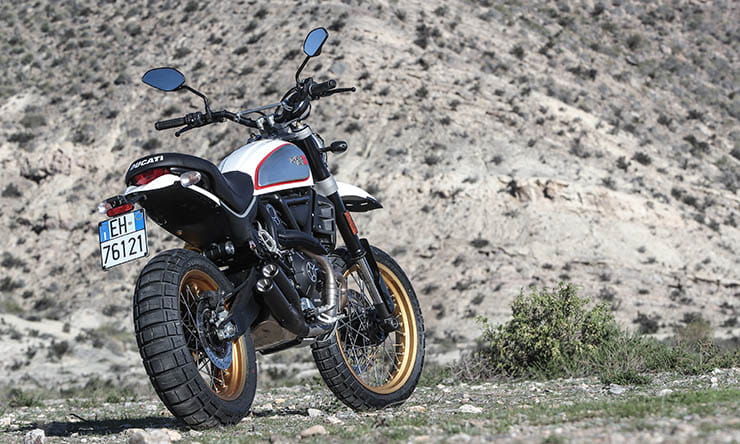 With a Sixties style desert racer look and a host of changes which give the Desert Sled genuine off-road ability, Ducati’s latest retro finally puts the scramble into Scrambler. Our man Marc Potter put the bike through its paces at the world launch in Almeria, Spain earlier today.

The Scrambler is a big deal for Ducati and has been a genuine global phenomenon, making it into the top 10 of the world’s best-selling motorcycles.

That’s a big number, and a large percentage of Ducati’s orders by anyone’s book, so it’s no surprise when Ducati unveiled two new Scramblers in Milan in November last year – the Café Racer, and the new Desert Sled.

It’s easy to forget that it was Triumph who actually brought back the word Scrambler with their interpretation based on the Bonneville in 2006. It was a big success for them, and explains why the new Triumph Street Scrambler just landed, but it was Ducati who made it a global sensation with its full marketing machine and the whole 'Land of Joy' concept behind it.

The Desert Sled is the most versatile version of the Scramblers from Ducati yet. And where the Scrambler in its most basic form, the Icon, had the looks of an off-road bike, it never had the traction to match the action. Okay, so we know there were six Scramblers in range, but generally they they were pretty much all the same in the dirt.

That has all changed with the Desert Sled. Forget the slightly jaded Land of Joy concept, the Desert Sled is a truly capable off-road bike that just so happens to have retro styling.

It might be piping the iconic Yamaha XT500 reincarnated in terms of its looks and style, and those super cool gold, spoked rims, but there’s nothing retro about the way it rides. It’s a modern motorcycle in every way, that just happens to be oozing achingly cool California desert racer looks. If Steve McQueen rode a motorcycle in 2017, he’d ride a Desert Sled.

We start our ride at the Fort Bravo cowboy movie set in the Sierra Nevada desert near Almeria, Spain, but for today it has been renamed Fort Desert Sled.

It’s all straight off a John Wayne movie, and in fact, the Good, the Bad and the Ugly was actually filmed here. Half expecting a bad cowboy with a face from a wanted poster to ride into town on his hoss, today it’s all about the Desert Sled. There’s a new Sheriff in town, and it’s built in Bologna. Let’s go and chase some cattle.

In the metal it’s clearly taller, beefed-up and sits a lot more proud than the other Scramblers thanks to a dedicated seat with an 860mm seat height, tailored to be narrower at the base of the tank. It looks great in pics and strong in the metal.

There are higher and wider motocross style handlebars and 200mm of suspension travel instead of 150mm. An aluminium bash plate stops stones destroying the frame and engine when off-road rocks come to roost. It works too. There’s a new front mudguard that sits higher and longer, a new rear mudguard with a higher number plate bracket. The Scrambler ‘ring’ headlight is familiar, but the homologated metal cage headlight guard is new. Footrests are from the Ducati Multistrada but our bike features optional, wider, off-road bear claw pegs for extra grip in the dirt. The pillion pegs can be unbolted.

The whole attitude of the bike is tougher, harder, and more dare I say it, manly? 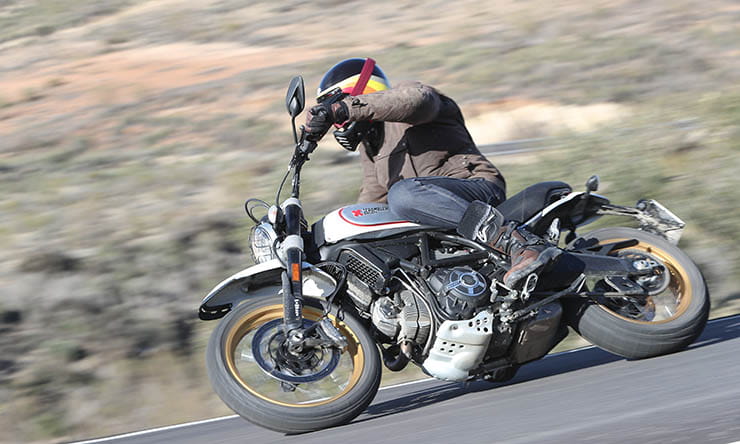 Taking a standard Ducati Scrambler 803cc V-twin motor, now Euro4 friendly with the addition of a new cat in the exhaust, it makes the same 75bhp at 8250rpm as the non Euro-4 Scrambler, despite that power and noise-robbing addition. But the big changes are to the chassis. After testing, Ducati realised they needed to strengthen the chassis around the swingarm pivot point area where the extra stress of off-road riding is focused through the chassis. It carries two forged pieces on the frame and the swingarm too is stronger and longer than the other Scramblers.

To match the stronger frame there’s 46mm Kayaba front forks with a radially-mounted Brembo caliper and a single 330mm disc. The forks are adjustable for preload, rebound and compression. The rear Kayaba shock is new too and from KYB’s Enduro range with an aluminium spring and new damping rates, plus that extra 50mm of travel (200mm in total). And let’s not forget those wheels. Gold rims on spokes, 19” front and 17” rear. They really finish the bike off and further hint to XT.

But it’s time to channel some McQueen (and yes I know he rode Triumphs and Husqvarnas off-road mostly), get the On Any Sunday theme tune on, and ride like Good ‘Ol Malcolm and hit the dirt. If you don’t understand then watch On Any Sunday, it is actually illegal to ride a motorcycle, especially a Scrambler, unless you have.

It might be the desert, but it’s cold when we ride out of town past the cowboy bank, the county jail and the town hall. There’s snow in ‘dem ‘der hills, boi. Surreal or what? And straight away it feels different to any other Scrambler. The engine is mellow low-down thanks to a new throttle cam which makes it slower at low revs, and quicker up top. It’s tall, and suits my six-foot four frame, but the seat’s narrowness means smaller riders cope easily too. A lower 840mm seat is also available. The bars are wider, swept back, and yes, here it is again, it feels a bit like my old Yamaha XT500 in terms of handlebar riding position, but taller, and a bit wider at the tank.

Wind on the power off-road and the Pirelli Scorpion Rally STR tyres find grip in the loose gravel. The pressures have been dropped from 2.2 bar standard to 1.9 bar to find a bit more grip off-road, but for a road-based dual purpose tyre, they’re very good indeed.

A few miles in and we hit deep sand. The trick is to get back on that long saddle and stop the front tyre digging in while balancing the throttle to keep it heading straight. The new throttle takes out the snatchiness of the older Scrambler and means it’s really well managed off-road. The motor pulls cleanly from 2000rpm, and we spend most of the time in second and third gear, barely getting to 6000rpm. The motor finds good traction low-down and you can control the rear slides easily on the throttle. The suspension copes with the bumps, feels a lot harder and better damped than the Scrambler Icon I’ve tested before and, it can cover ground rapidly.

Certainly quicker than most real owners are ever going to ride their £10,000 motorcycles off-road. It’s pretty impressive though. Let’s be straight, it’s no enduro bike, and feels a bit heavy off-road, because thanks to the new frame, the swingarm, the bash plate and the changes its some 20kg heavier than other Scramblers, and comes in at 191kg dry but carries it low and centrally to the bike.

The trail gets harder and rockier, the tyres find grip, the suspension copes and not once did I bottom out the suspension. The brakes are fairly gentle with ABS turned off, and easily controllable to prevent the front locking up on dirt.

Forget any ideas that the Scrambler can’t scramble, it does it as well, if not better than any so-called adventure bike. In fact, I could easily see that with a set of panniers, some handguards and set of proper knobblies there are very few places on earth that the Desert Sled couldn’t comfortably get you too. A new breed of simpler adventure bike lurks beneath its retro skin. The bike doesn’t need traction control, and all that is in front of you is a single digital clock mounted off to the right. Just focus on the trail and that incredible view of the Sierra Nevada mountains.

A couple of times I get in trouble, and head for ditches that I shouldn’t be heading for, but the Sled slays it, which is more than I do in deep sand on a turn later on. But that’s another story…

We head for the road and cruise around 130kph/80mph It’s as much as I want to go with the big peak of my Bell Moto 3 helmet tugging at my neck, but I reckon with a normal road helmet on it would be very comfortable at this speed. The motor chugs along, with a subtle throb, without any intruding vibes. The stability isn’t as good at speed as a Scrambler Icon, but then there’s wide bars affecting the handling as the rider pulls on the bars in the wind, and that high mudguard acting as a sail, but it’s not bad considering.

On some fine twisty roads you can tell the bars make it easy to pitch it into a turn until my motocross boots scrape. The tyres may not be road tyres but are fine and well within their limits. It pulls clean from 2000rpm, gets bigger at 4000rpm, feels stronger at 6000rpm to 8000rpm as we blat between hairpins. It’s fast enough, friendly as hell and puts a smile on my face. A pipe would make it sound better though, but it sounds good enough through the twin exit Termignoni pipe. A high-level Termi is available as an accessory from Ducati dealers along with some trick LED indicators, crash bars and a handlebar pad.

The handling in faster corners is numbed slightly by the lower tyre pressures. Beppe, the Ducati lead rider and 10-times Dakar Rally finisher tells me it feels much quicker in the turns with standard 2.2 bar tyres pressures in. I believe him.

But it turns nicely, easily. Never quick steering, but not lazy either, just predictable and like a friendly, big supermoto in the turns. The brakes are up to the job, never stonkingly powerful, but enough and with plenty of feel to get the front tyre howling with the ABS turned off if that’s your gig. 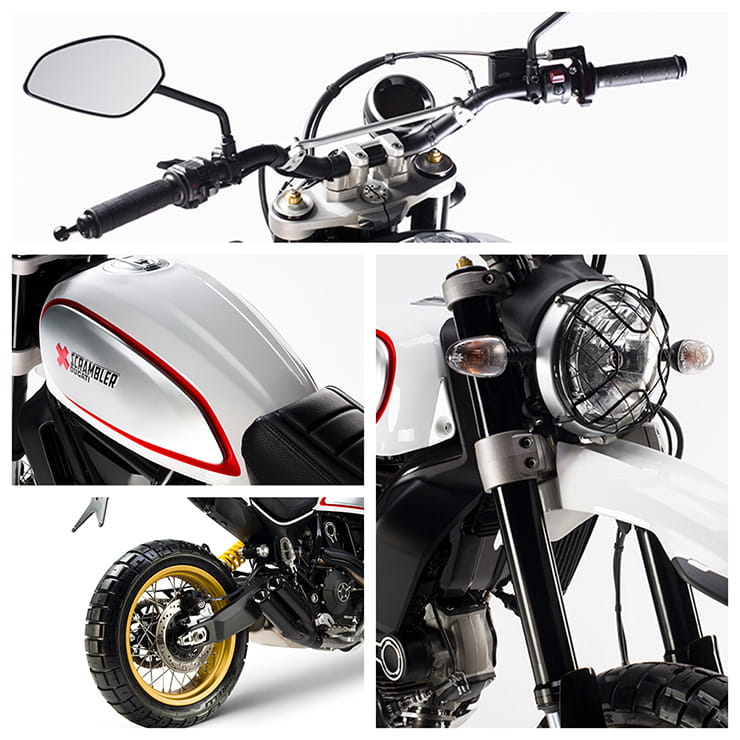 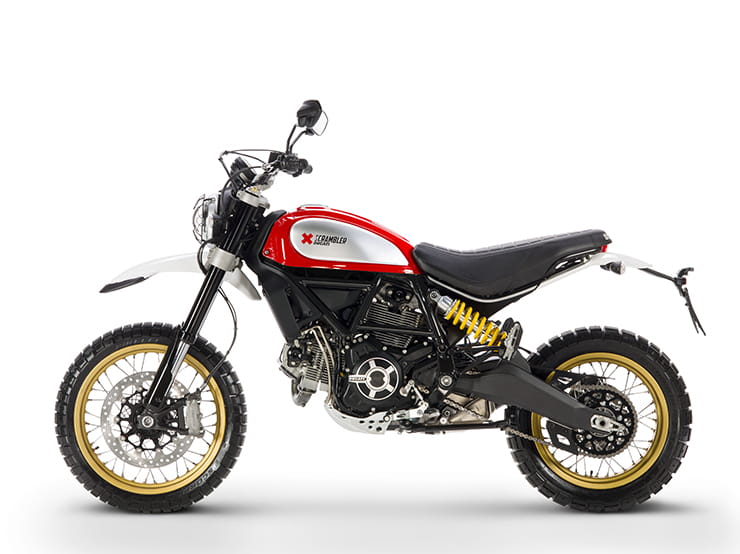 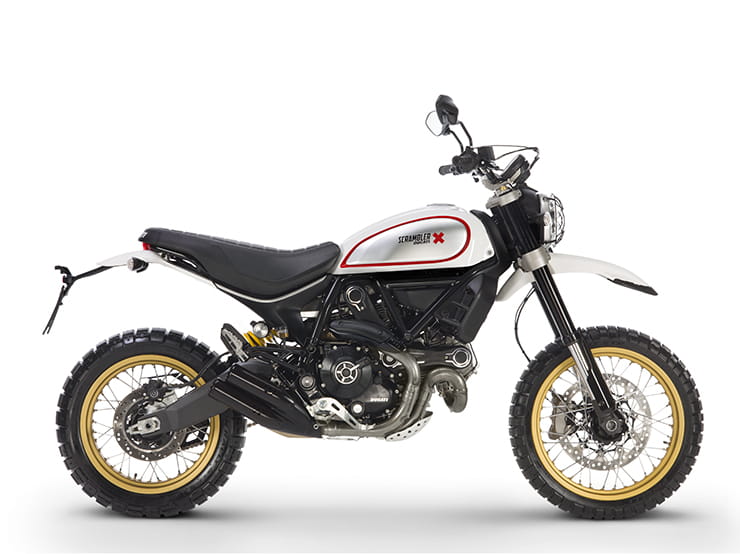 The Desert Sled is one of the coolest-looking bikes on the road, has that whole laid back vibe that is big right now in biking. It doesn’t demand you to ride fast, it doesn’t ask you to do anything you don’t want, and is really pleasant to chug along, riding rapidly over bumpy roads in an open face lid. It’s great in town and after some 80km off-road can definitely say that it does that impressively for a big bike. If you want to look cool, turn left and take in that bridleway you’ve always wondered about, or maybe go for a blat along the beach and pretend you’re a Seventies dirt bike racer, the Desert Sled will do it all with ease.

With thanks to Milagro for the images (they're coming soon - for now it's just the iPhone pics, sorry!)