If you’re 19 -24 you qualify for the new A2-licence category. Get your provisional, take your CBT pass your theory and practical tests and these are our pick of the best sub 47bhp bikes you can play with.

Remember, you can get your motorbike insurance with Bennetts, and if you're looking to insure multiple bikes, we also offer multi bike insurance.

There are plenty of conversion options too with bikes as big as KTM 1050 Adventure that can be restricted to conform with A2-licences but for now, these are our off-the-shelf options: 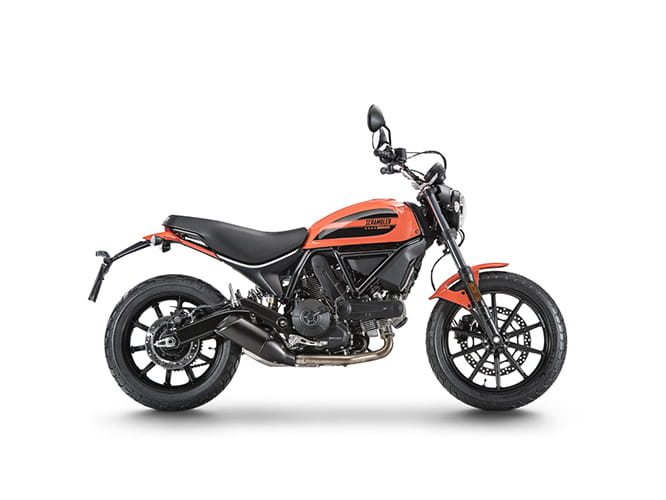 New-for-2016, 400cc version of Ducati’s popular Scrambler retro is aimed specifically at A2 licence-holding novices. Smaller V-twin engine produces 41bhp and, with softer, cheaper suspension and narrower rear tyre it delivers an easier, friendlier ride, too. In every other respect though it’s still a pukka Duke Scrambler and, although £800 less than the full fat versions, at around £6400 it’s one of the pricier options here. 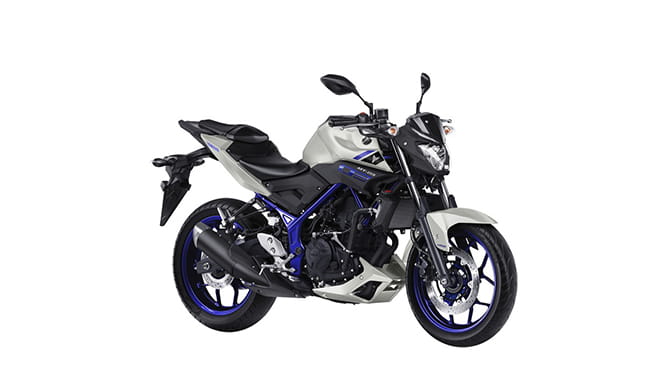 Also new for 2016, is this ‘naked’, roadster version of Yamaha’s YZF-R3 sportster. As such it has the same, perky, 321cc, 41bhp parallel twin motor and tubular steel frame but with an upright riding position that accentuates the little Yamaha’s lightness and manouvrability and makes it even easier for newbies to ride. And, with aggressive, angular styling that’s in keeping with the rest of Yamaha’s MT family and a class-competitive £4500 price it’s understandably already one of the most popular machines in the class. 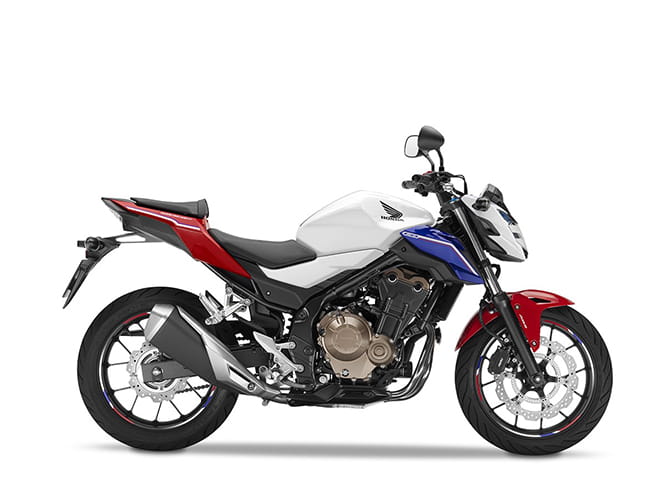 Honda’s answer to the new A2 class in 2013 was not one but THREE all-new models based around an all-new, purpose-built (in Malaysia), 47bhp, 471cc parallel twin in a stylish, novice-friendly and affordable chassis. The F is the naked, roadster version with the others being the X adventure bike and CBR-R sportster with all being updated and facelifted in 2016. Being a naked the F is the cheapest, is great fun and versatile although lacks the long-distance ability of its faired siblings. 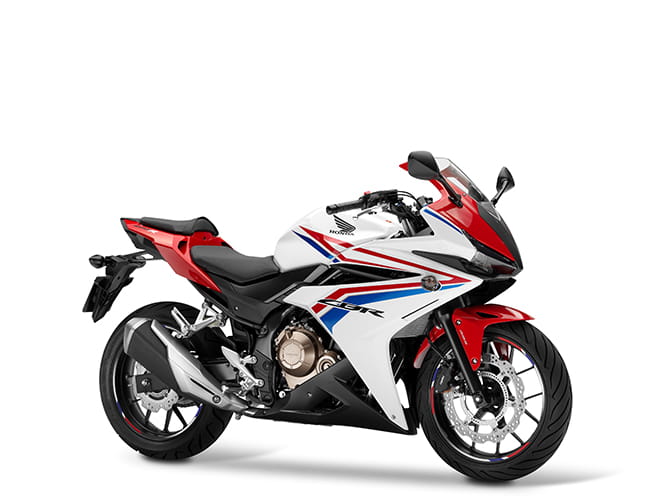 The sportster member of Honda’s updated-for-2016 A2 licence-friendly CB500 family may look the raciest due to its much improved, Fireblade-alike styling but is actually incredibly easy, versatile and confidence-inspiring to ride. No high tech screamer like, say, Kawasaki’s rev-hungry, slipper clutch-equipped Ninja 300, but being a full 500 the Honda has a proper ‘big bike’ feel, is sporty enough and entertaining and, with newly uprated components (such as the restyled exhaust can and newly adjustable forks) has shed its slightly ‘budget’ looks of yore, too. 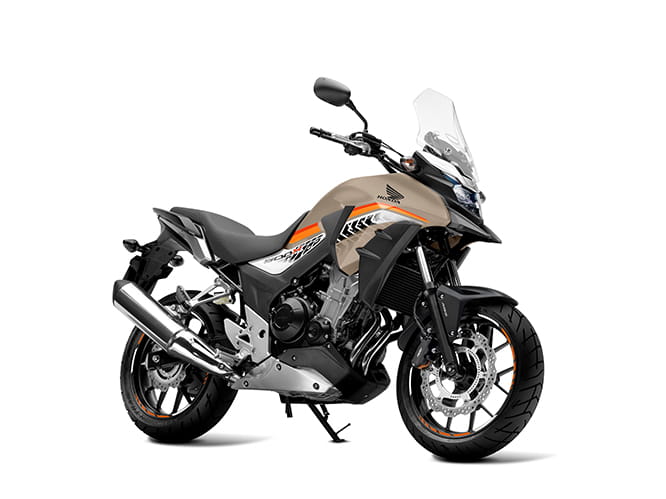 If you’re a bigger than average rider and want your A2-compliant bike to be as full-size and roomy as possible, the X is the bike for you. Based around the meaty, flexible CB500 parallel twin but with 20mm longer forks, tall bars and adventure style fairing (although subtly updated for 2016 the X, due to optional luggage restrictions, hasn’t received the full face-lift its F and R bothers did) it’s a ‘proper’ junior adventure bike capable of intercontinental two-up riding. 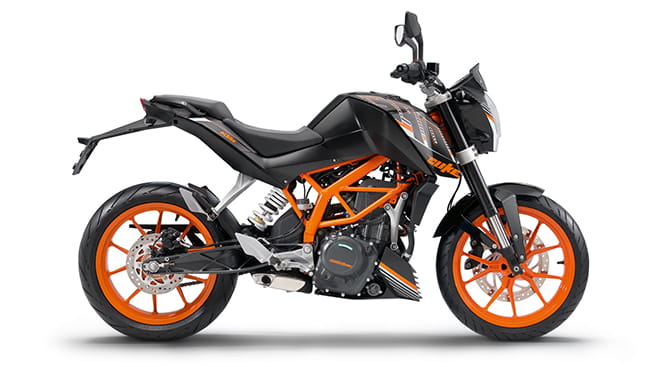 Very much the joker in this pack. The A2-compliant Duke is effectively a supermoto that’s evolved over the years into a funky roadster. Light, nimble, funkily-styled and exciting it’s powered by a liquid-cooled, 373cc single that puts out a fun-packed 44bhp and is both a doddle to ride and a hoot, especially around town. It’s diminutive size, light weight and slimness count against it over distance or out on the open road but the orange Austrian is still a very tempting buy. 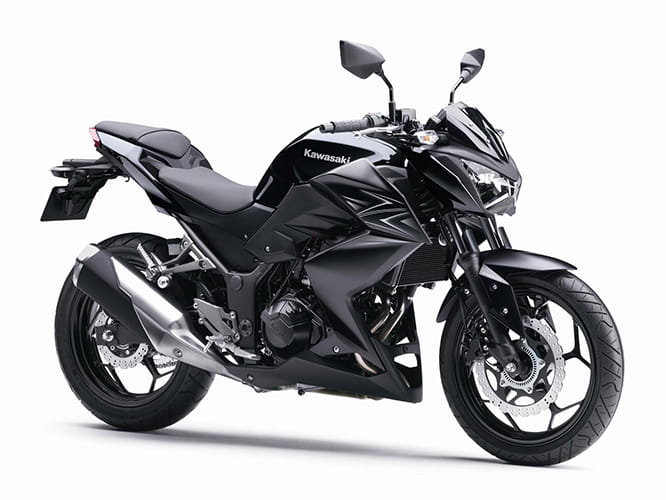 Being just 296cc, this naked version of the Ninja 300 twin sportster can’t match the outright power (it produces 38bhp) of rivals such as KTM’s 390 Duke or Honda’s 47bhp 500s, but it makes up for it with a rev-hungry attitude, decent chassis and handling and a true ‘junior Z800 or Z1000’ attitude that most other A2 bikes just can’t match. Being a twin it’s smooth and balanced, and being better finished and equipped than most, too (the instrument, console, for example comprises a digital LCD display) means it’s somehow classier than most as well. 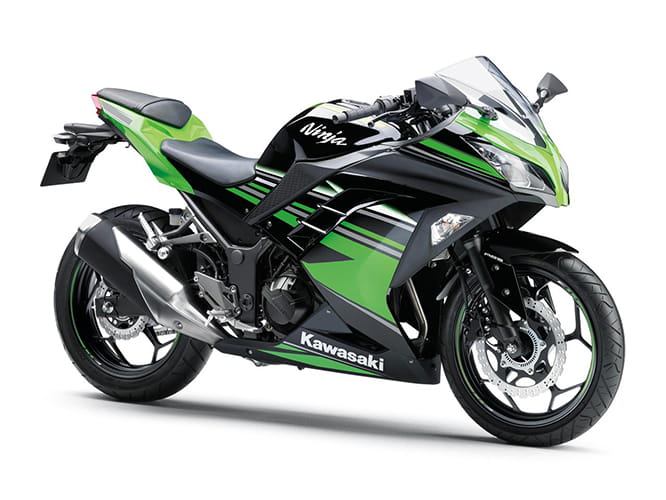 Having been around since 2012 the little Ninja is one of the oldest of the A2-compliant sportsters but it’s a sure sign of its class, quality and sheer ability that it’s still one of the best. A proper, entry-level sports bike with all the allure of a mini ZX-10R thanks to great styling, an entertaining, revvy twin cylinder engine with the nimble handling to match and a decent spec that includes a slipper clutch and digital speedo. The cherry on top is that it’s novice-friendly and a doddle to ride as well. Still one of the best. 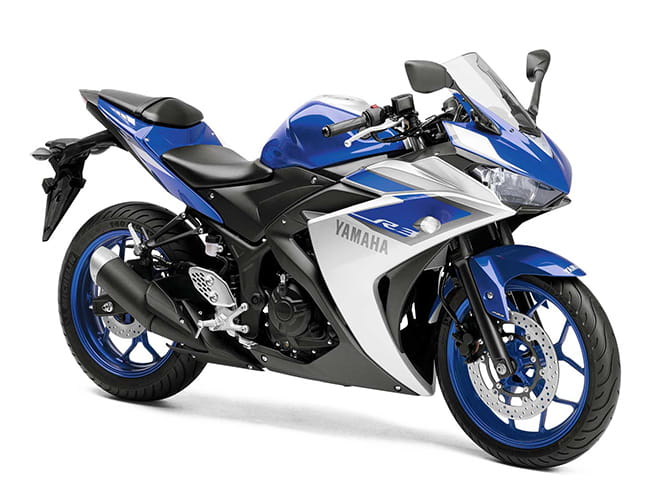 Introduced last year, Yamaha’s all-new rival to the Kawasaki Ninja has, in most respects, its Kawasaki rival beat but yet can’t quite match it for class and allure. Built, like Honda’s CB500s outside of Japan (in this case in Indonesia), the R3’s slightly larger parallel twin betters the Kwak by producing an entertaining yet flexible 41bhp, its chassis is hugely entertaining yet versatile and it even slightly undercuts the Kawasaki on price, too. Can’t quite match it for flashy spec, though. 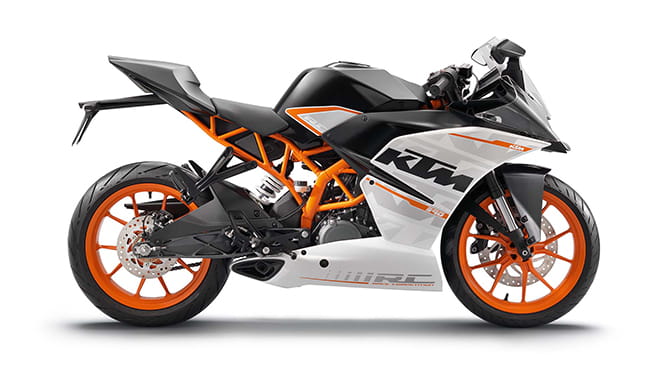 Unusually, this faired sportsbike followed its naked brother rather than the other way round, which probably says it all about KTM. Based on the light and lively 390 Duke this fully-faired sports single is light, lithe and fun and probably the most nimble of the breed. On the slight downside, being so light and a single, doesn’t make it the best suited to larger riders who’d be better off with one of the Japanese twins and, though stylish, its specification is fairly basic and crude, too. Great fun though!