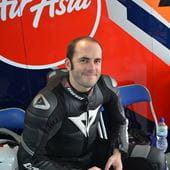 By Martin Fitz-Gibbons
Riding for 20 years and a journalist for 14 of them, MFG's two-wheeled experience is as long and as broad as his forehead. Owns a BMW F800GS and a Suzuki SV650S, and is one half of biking podcast Front End Chatter. 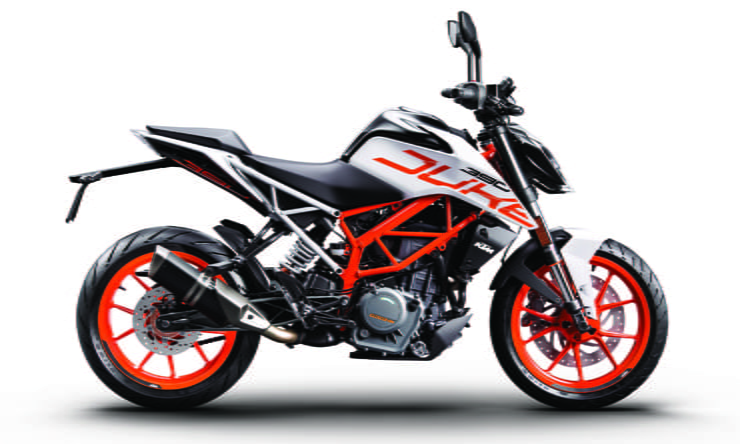 Big may be beautiful, but small can be sublime. KTM’s 390 Duke combines all the qualities that make riding sub-500cc machines so rewarding and exciting, not just for younger, shorter or less-experienced riders but for everyone. It has a pared-down purity without seeming basic, lacking or cheap. It steers with breathtaking speed without ever getting unstable. And its engine punches purposefully without feeling breathless or lethargic, but still encourages you to wring every last drop of power from it.

And now, four years after the 390 first appeared, KTM have updated it into this second-generation model. In fact, ‘updated’ doesn’t quite do the depth or breadth of the changes justice – ‘overhauled’ is perhaps more fitting. The entire chassis is completely new: a new frame, with new geometry, new suspension, brakes and wheels. It’s taller and shorter than before, the whole bike riding 15mm higher to give more ground clearance, and the already-stumpy wheelbase cut down by 10mm for even greater agility.

The ergonomics have changed slightly too. A new seat now sits 30mm higher than before, but while the 830mm spec-sheet figure might seem slightly daunting the Duke’s utter lack of bulk mean most riders will still have no trouble getting both feet flat on the floor. You reach out over the top of a larger steel tank (its capacity increased from 11 to 13.4 litres) to grab a new handlebar. It’s a slightly more aggressive position than before, the rider tilted forwards just a few more degrees off vertical. For a small-capacity bike, the riding position is surprisingly full-size – it’s deceptively accommodating for a grown adult. 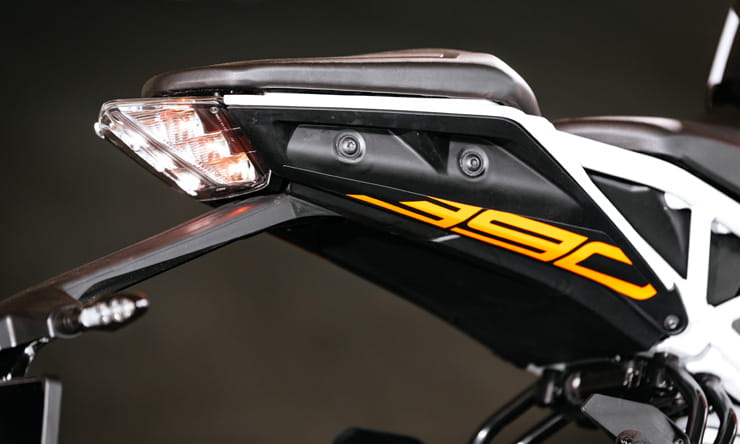 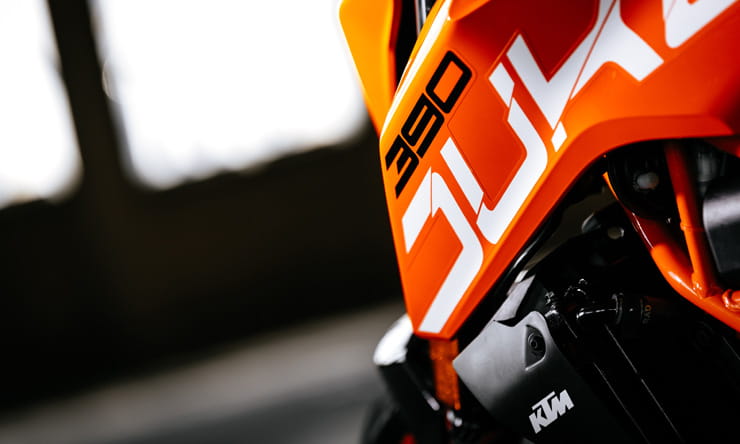 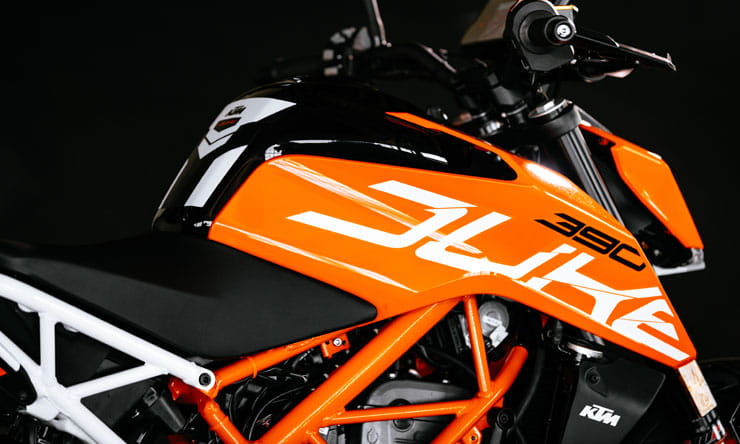 The 390 Duke’s big-bike aspirations are obvious. Its sharp styling is built entirely in the mould of KTM’s flagship 1290 Super Duke R, from the pointy-nosed all-LED headlight to the design of the new tubular steel trellis frame, and the fact it now has a separate bolt-on rear subframe. Even the colours – orange main frame, white subframe – are identical to the new 1290. And it’s the same story from onboard the bike. A full-colour TFT display, about the size of a modern smartphone, has been chosen as it fits in with the rest of the Duke range – both the 690 and 1290 have similar-looking units, with similar graphics. The 390’s switchgear is new too, with the familiar KTM-family four-button cluster on the left-hand bar to control and set the dash.

It all lends a strong feeling of quality, of modern design and an embrace of contemporary technology. There’s even an option (for an extra £24.29) to add KTM’s “My Ride” Bluetooth connectivity, where you can link the dash to your phone and either control music or answer incoming calls (though, importantly, not make outgoing calls) without taking your hands off the bars. Such features might not be to everyone’s taste, but it’s a unique option that’s totally in keeping with the bike’s youthful, hi-tech design.

But KTM haven’t just restyled the 390 and bolted on a bunch of gadgets. They’ve tried to improve it throughout, from easily overlooked details like the clutch and brake levers now having new span-adjusters, to core fundamentals like the completely redesigned suspension. The forks and shock were one of the previous 390’s weakpoints, revealing their budget nature with their harsh, springy ride. The new suspension feels an immediate, night-and-day step up in quality, the redesigned internals offering far better control and a plusher ride quality over rough road surfaces and city-centre potholes. 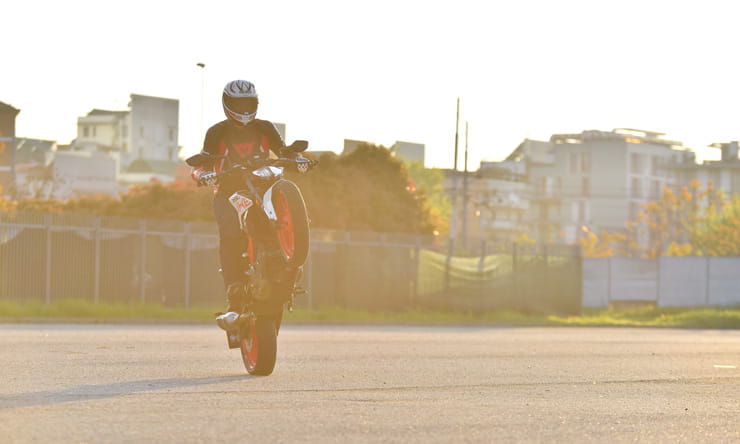 The forks now sit in new yokes which have also sharpened steering geometry, reducing trail by 5mm to just 95mm. Combined with the shortened 1357mm wheelbase – which makes an Aprilia RS250 look positively gangly at 1370mm – the 390 Duke handles with an effortless, instant appetite. Turn-in needs only the gentlest pressure on the bars, accuracy is almost automatic, and the slim tyre sizes offer no resistance. Rubber itself is Metzeler’s M5 Interact, and while it’s a decent sporty tyre with a broad operating range, it’s also a six-year-old design that’s been superseded by the firm’s M7 RR – it’s perhaps the only part of the bike that clearly isn’t cutting-edge.

Wheels are new too – well, sort of. The 390 Duke is a truly global machine (it’s designed and developed by KTM in Austria, but built by Bajaj in India), and as such there are different specifications of the bike built to suit different corners of the world.

The previous 390 Duke was built using two different sets of wheels – a lighter pair, which we got in Britain and Europe; and a sturdier, more heavy-duty set for countries with less-developed road networks (yes, even worse than ours…). But now all 390s will come on the heavy-duty set – it means they’re more able to withstand impacts from potholes, but they also add several hundred grams in weight at each end.

In fact, almost all of the new parts have added weight, including the frame, headlight and TFT dash. Overall the new 390 Duke has put on a total of 10 extra kilos, and with the larger fuel tank brimmed it now weighs something in the order of 160kg (our calculation, as KTM don’t claim a kerb weight). That’s still not a lot in the grand scheme of streetbikes, but it’s also virtually no lighter than KTM’s 690 Duke. It doesn’t actually feel any heavier than before – from onboard it seems every bit as deft, slim and nimble as the old bike – but the fact it carries more mass is the model’s only apparent backwards step. At least the extra bulk means that riders with an A2 licence no longer need to restrict the engine slightly to meet the class’s power-to-weight ratio limit.

One other contribution to the weight is the new side-mounted silencer, which helps the 390 Duke to meet Euro 4 noise limits. It doesn’t rob any power – in fact, the 373cc single still makes the exact same 43bhp as before, while peak torque is actually increased slightly thanks to a larger airbox. The 390 also has a new ride-by-wire system to help KTM make it pass emissions standards. Throttle response is fine – there’s an occasional hesitation at low revs in low gears, but it’s certainly no snatchier than the previous bike’s cable-operated throttle was.

The engine remains the real soul of the bike. Unlike old two-strokes it has a good spread of power, pulling admirably from just 3000rpm, and unlike plenty of other softer commuter-based small bikes it has plenty of fire and engaging attitude at the top end of the revs too. Gear ratios are chosen perfectly, with just the right amount of dip in revs between swapped cogs. The change is slick – oddly, far easier than on the previous 390 Duke, though KTM say they haven’t changed anything – and a slipper clutch helps smooth out rapid block downshifts.

Braking power is improved too, with a larger 320mm disc, and the same decent ByBre (a sub-brand owned by Brembo) four-piston front caliper as before. ABS is still standard and completely unobtrusive, but along with the option to switch it off there’s also now a new ‘Supermoto’ setting. This keeps the anti-lock function on the front wheel but turns it off at the rear wheel – of little practical use, but it’s all in keeping with KTM’s skid-happy character.

The 390 Duke is still nowhere close to being a do-everything all-rounder. The single-cylinder motor is smoother than you’d expect most of the time, but those inevitable vibrations make find a way through the bars and footpegs at motorway cruising speeds. Weather protection is minimal, the previous bike’s pillion grab handles have vanished, and the seat is better suited to short hops and frequent pitstops than long days in the saddle.

And yet it has such sheer charisma that you can’t help but fall for it. You get swept along on the contagious enthusiasm of its pulsing powerplant, and find yourself quickly addicted to chucking it around so quickly both in town and out on twisty backroads. Crack the throttle wide open in first or second gear and it charges off with a genuinely startling spirit that no other bike in its capacity or price bracket can come close to mustering.

This is not just a temporary step-up bike, a bridge between the firm’s 125 and 690 Dukes. It’ll fulfil that role perfectly well, with almost three times the power and torque of its 125 sibling, plus firmer suspension and stronger brakes, and all for a price tag more than three grand cheaper than the 690. But it’s also a fine second bike for more experienced riders, a sidearm in the garage offering a welcome change in pace and purpose to a litre-plus machine. But whatever your level of experience, the new 390’s improved suspension and more attractive clocks boost its overall sense of sophistication, and make it feel like a bike that’s only small in capacity – and not quality, ambition or enjoyment.