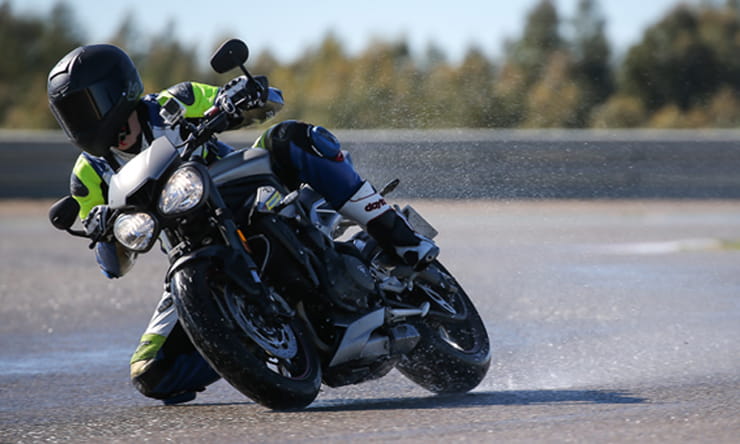 The Michelin Road 5 – the replacement for the Road 4 – is aimed at anyone that rides in changeable conditions; if you ride in the UK, that means you, and Michelin says that the maximum lean angle in the wet is 35°! 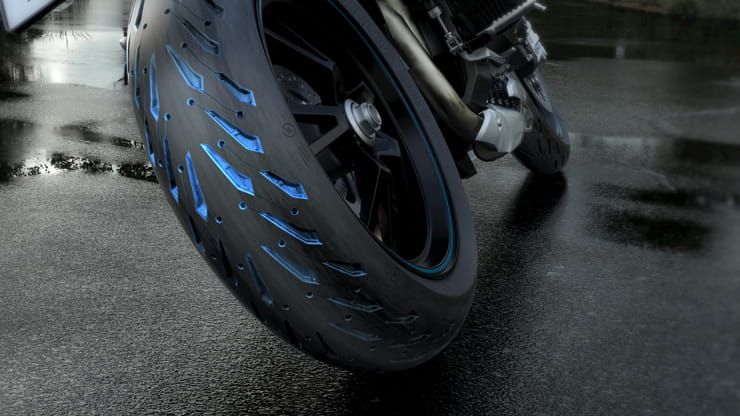 Stability and longevity in a tyre come from the carcass stiffness and how – and where – the compounds and tread are laid.

Michelin claims the Road 5 does not compromise with compounds, and that it strives for the best wet and dry grip. Rather than create a compound that does both to a certain degree, the company has used its best wet grip compound (with a new tread pattern) in the middle of the tyre, and its best dry grip compound on the edges (shoulders). The trade off is that the wet section ‘only’ allows for a 35° lean angle before you’re running on the slick edge of the rubber. In most cases I doubt I would ever lean my bike even close to 35° in the wet on the road. 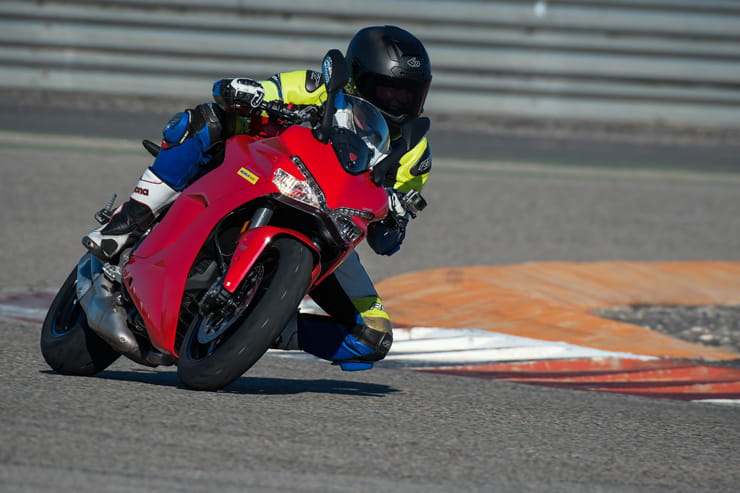 A challenge with all tyres is the way in which they wear down. When new they’re more effective in the wet as the grooves are deeper so clear water more effectively. On the Road 5s, a new trough (the part of the groove that channels the water away from the road) opens up wider the deeper it gets, allowing the tyre to shift more water as it wears down. In distance stop tests, Michelin claims to have been getting consistent grip and braking distances on tyres with over 1875 miles of wear – in a demonstration the Road 5 – with 1875 miles on it – stopped two meters sooner from a speed of 60 mph than the Road 4. 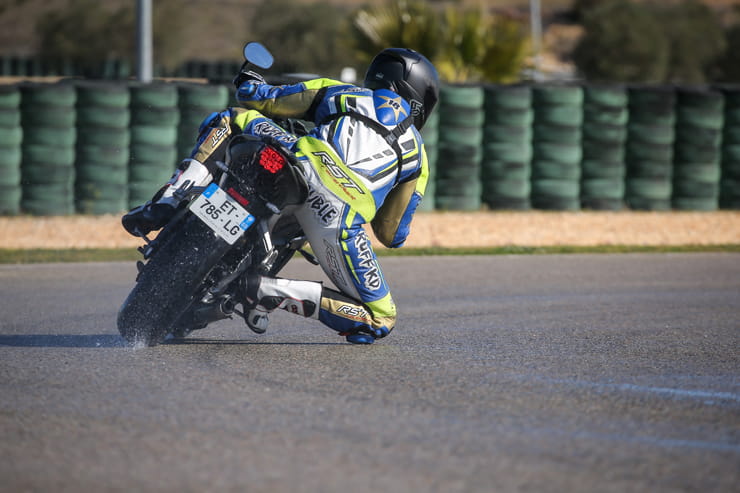 The carcass of the Road 5 has ‘MICHELIN ACT+’ technology (Adaptive Casing Technology), which is claimed to provide the tyre’s shoulders with varying degrees of rigidity that Michelin claims gives better stability, with more straight-line and cornering performance.

Sport touring tyres will normally have a neutral profile that allows for a confidence-inspiringly smooth and easy roll into corners, helpful when riding two-up or with a luggage. Michelin says that it still wants the sporty fun element to its tyre, so has made the centre of slightly raised, a bit like a sportsbike tyre. It is not as focussed but retains enough of a more pointy profile to make the bike more flickable. 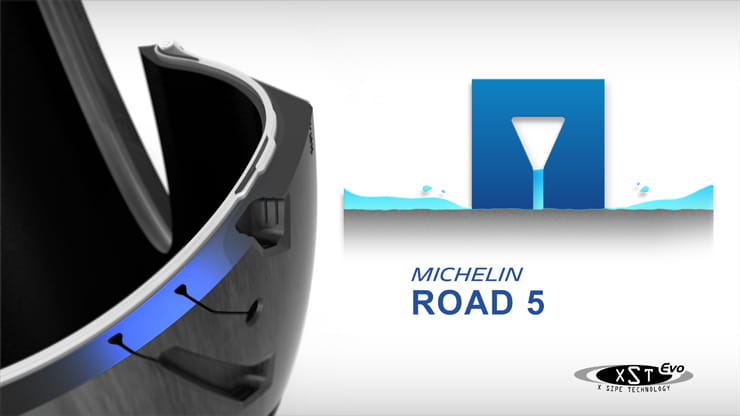 On the dry test track we had three laps on a Ducati Supersport, followed by three laps on a BMW S1000XR. On the wet track we had three laps riding a Triumph Street Triple and then a Yamaha MT – 10. The track had a combination of patchy dry to wet sections with standing water and puddles, some of which were right on the corner apex. There were two challenges on the track – one a hard braking exercise that was slowing in a straight line from around 80mph, and another where we braked hard just before a quick change in direction from left to right. This showed what the tyre might do if you were trying to avoid a hazard in the wet.

The Road 5 is a road tyre designed to perform in the real world, so you may think it strange that we started out riding on track, but testing in a controlled environment allows you to focus on the tyre in relative safely. On track with brand new cold tyres and no warmers I usually take two or three laps to get some heat into the rubber, but Michelin was so confident, the team asked us to put our heads down from the start in both dry and wet conditions. 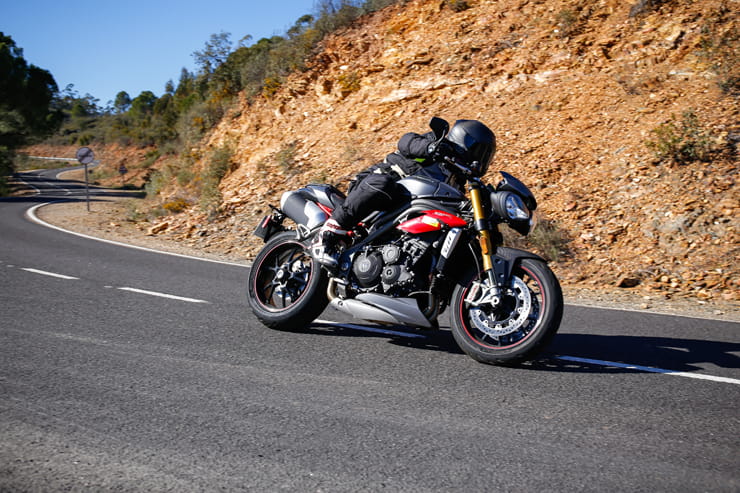 The roads around Monteblanco offered the perfect testing ground for the tyre, and we rode a 90-mile loop on a range of bikes including a Triumph Speed Triple, Yamaha Tracer 900, Yamaha MT-07, and Aprilia Tuono V4 1100.

The surface was good in places but there were some rough single-track roads with gravel, patchily repaired with newly-laid tarmac where gravel and loose stones had been left.

There were steep climbs and descents with a series of tight switchback hairpins – we rode a bunch of sweeping roads, much like British A-roads, winding up and down the side of the mountain; perfect knee-down riding where we could push the tyre. In these conditions I found that the profile allowed me to flick from one side to the other effortlessly. 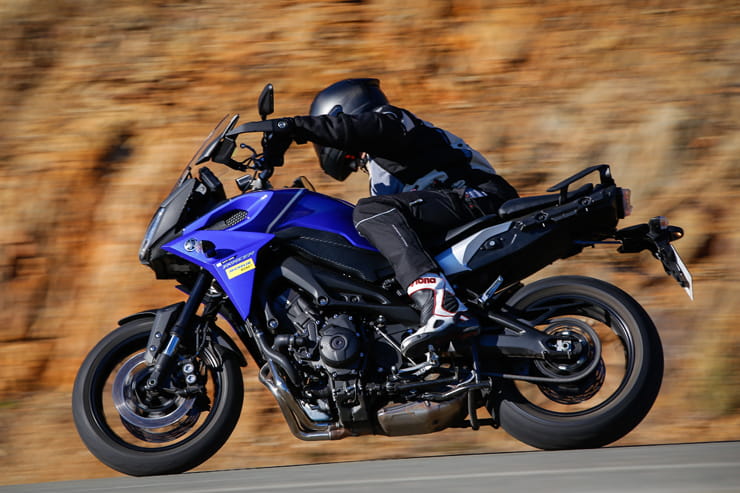 Later in the day there was a section of road that had you switching from one side to the other really quickly for what seemed like 30-miles. This is where I tested the slick compound edge that Michelin had been telling us about. I had the machine edge to edge and found the grip to be good, although I didn’t have much feedback – I could feel the bike moving around more although this was probably accentuated by changing between bikes with different characteristics.

The tyre was stable, so I could concentrate on reading the road, rather than think what the rubber was doing –  I didn’t have to second-guess how much grip I had, I could just trust the tyre. 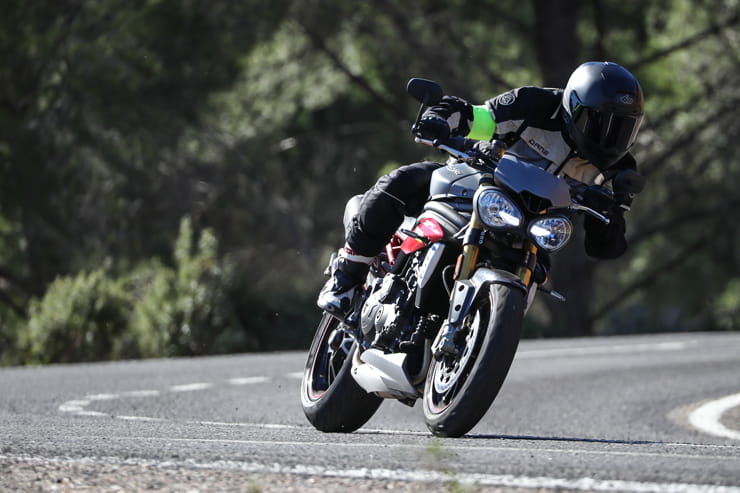 Braking hard for corners the front felt planted and never gave any indication it would give up. I tried carrying a bit of front brake into the bends to see how it felt – loading the front under braking – and the steering remained stable. Dabbing the back brake or trailing in hairpins never created any moments either. 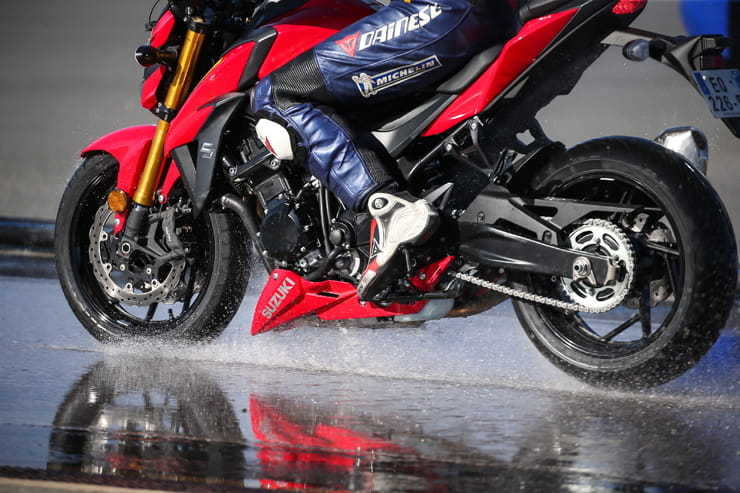 On track in the wet

When someone says ‘don’t do this’ I usually ignore them. So when Michelin said to not exceed the 35° lean angle on the road in the wet, they may as well have been telling me to try and get to 40°! If you only have three laps you need to make each one count.

The Monteblanco track in Seville has been built to test everything you would find on the road: if you, the bike or the tyre are not up to scratch, you could find yourself on the way to A&E.

In spite of the winter sun it was cold, so I was wearing an extra layer under my leathers – not ideal conditions for hauling a 200kg motorcycle around a track. The ambient temperature also meant that the track surface was well below optimum and offering less grip.

I was told that even when you’re leant over and riding on the slick edge, a certain percentage of the contact patch should still be on the silica compound, with the edge of the tread pattern engaged.

Riding the Speed Triple on the back straight braking test I put some power though the braking system, telling myself I might be generating some heat in the tyre for the next corner. I did the same again in the braking zone before making the quick left-right swerve avoidance test. In both cases the bike was stable and had bags of grip. For the first turn on lap two, with the tyres warmed, I just gently leant over and managed to get my knee on the ground. Acceleration, braking and lean angle on the Speed Triple were all good, and I was happy with how the Michelin Road 5s had performed in the sub-optimal conditions. 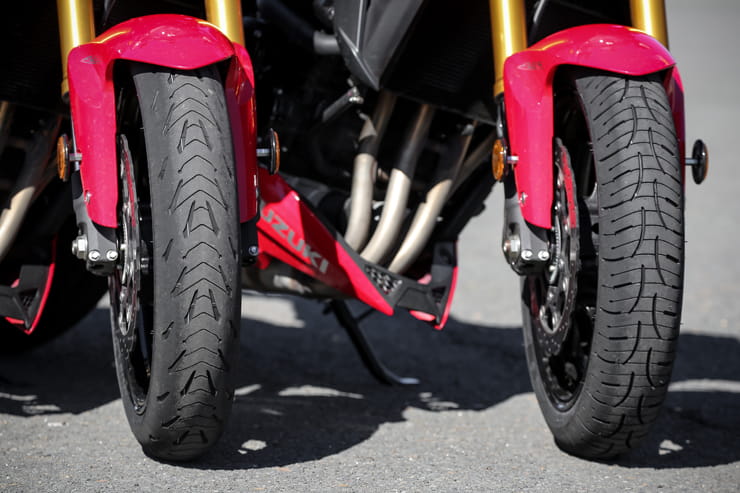 The second session was riding the more powerful and heavier Yamaha MT-10. My tactic for the three laps was the same, but with more power and higher speed coming out of the turns I managed to get the back tyre to slide. It was slow and never came that far around on me, just enough to give me the warning that I was pushing it too hard for the angle and level of grip. In the real world, with stone-cold tyres in the wet I would never push as hard or lean as far as this, but in the controlled environment of the circuit it was important to find the limit. 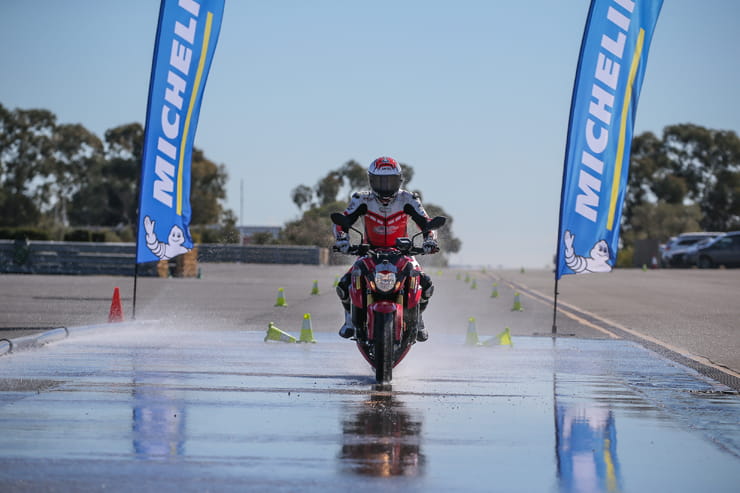 On a dry track

The dry laps were predictable and there were no heart-stopping moments, though the BMW’s soft set-up meant the bike was really loose under braking. That said, even with the largest ground clearance and comfiest suspension of all the bikes we rode, it was planted enough to give me the confidence to lean the bike right over.

In a high-stress situation, changing direction and pushing a bike over further always makes you nervous that there’s not enough grip, and the panic roll-off or braking instinct can kick in. From the start of the day to the, end I always felt that the Michelin Road 5s had the grip. 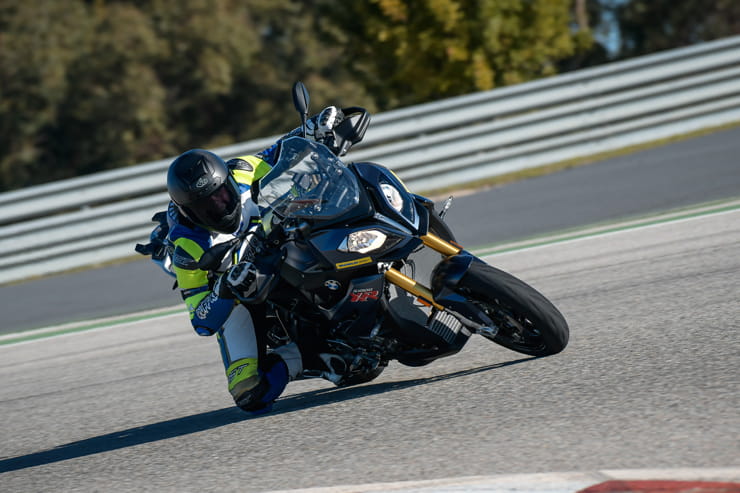 The Michelins only gave any indication of letting go when I was riding harder than most people would on the road. The fact that I could even do this is testament to how well it will perform in normal riding conditions.

If you’are looking for a fast road tyre, with more of a focus on track, check out the Michelin RS but for a tyre aimed at the road rider, the Road 5s had more than enough grip, both in the wet and dry. While time will tell for longevity – and we welcome your comments below – this is smooth, predictable rubber.