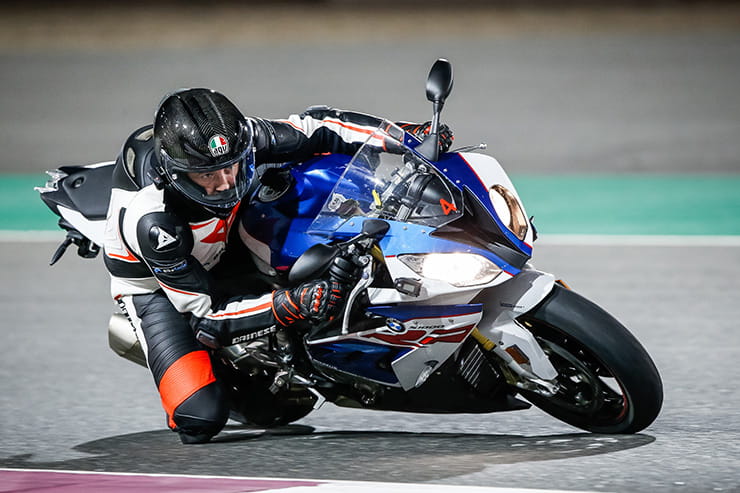 "Are you sure they're not slicks?", I ask Michelin's Product Manager with a wry smile and a raised eyebrow as I flick up my visor having rolled down the pit lane of the Losail International Circuit in Qatar on a BMW S1000RR.

I'd come to a standstill in a designated spot outside the pit garage still marked '46 Valentino Rossi', leftover from the previous weekends MotoGP, right in front of a camera crew. I'd been asked to offer my initial reaction to a film crew working on behalf of the French tyre manufacturer. I wasn't hamming up my response for them either, honestly. I was both genuinely and hugely impressed by the new Power RS rubber which, for the previous 20 minutes, had undergone a strenuous collection of laps strapped to the extraordinary 200bhp German machine. I'd already ridden a Yamaha R1 and an Aprilia RSV4 in earlier sessions, as well as a Yamaha R3 and a KTM RC390 on a much smaller replica circuit to add some depth to the test. More about the smaller bikes and their own version of the Power RS later. 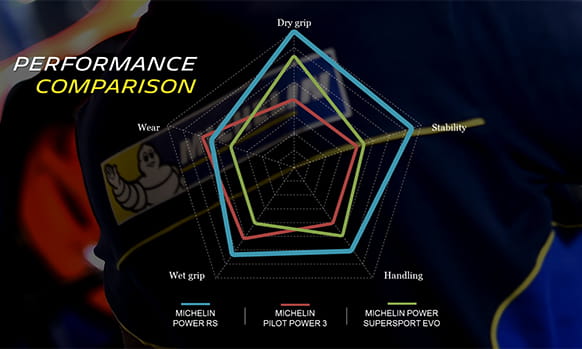 Let me clarify the term 'strenuous'; I'm no GP rider nor professional tyre tester but hang on without too much embarrassment in a track day fast group so can offer consolation that, on the basis that this is not strictly a dedicated track tyre, my ability will have pushed the tyres in a performance situation that is close to the peak of what they're designed to do.

What's is also important to tidy up is this was strictly a track test. There aren't many so-called 'twisties' in Doha. Nor is their rain...well, except for the first round of this years’ MotoGP World Championship as was unfortunately evident for much of the previous weekend. Michelin were quick to state that the primary focus of the new Power RS is as a road tyre designed for occasional track use. I beg to differ though, the new Michelin’s are top class and are superb on the track making each bike easier to ride. The only questions that remains is their durability. Michelin’s spider diagram pitched the new rubber against its own Pilot Power 3 and Power Supersport Evo and while the RS dominates in dry grip, wet grip, handling and stability, its predecessor pips it for wear.

However, before the summer is out, I shall have had a set of Power RS tyres attached to a 2017 Honda Fireblade SP ready and raring for the suspension-abusing conditions UK roads offer. And for the benefit of a thorough test, and this may make me unpopular, I hope it rains a little too.

Slotting into Michelin's range between Touring and Track, and replacing the popular Pilot Power 3 since January this year, is the new Power RS. Michelin claims the new tyres are 3.5s per lap quicker than their predecessors around Cartegena in Spain with its approximate lap time of 1m40s. Yep, that made the line-up of German, Italian and British journalists pay a little more attention to the briefing. 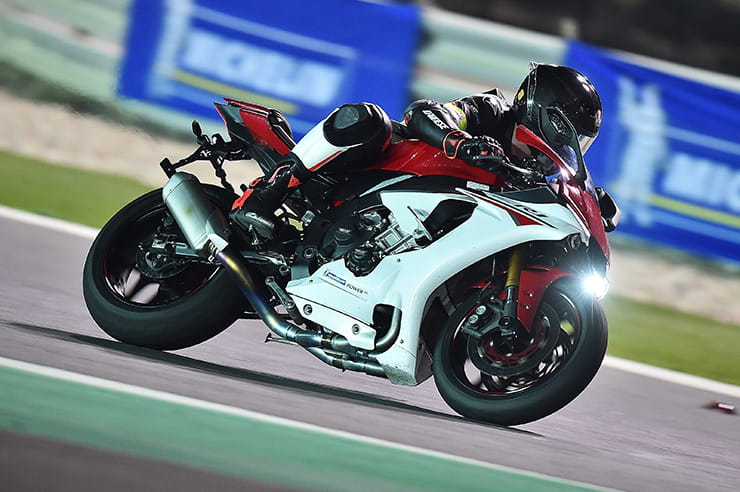 30 years after the first radial tyre was introduced in 1987, Michelin have been busy for the last two years developing 15 prototypes, using 54 bikes on five circuits across three continents ready to introduce the Power RS. The new rubber has been available in the UK since January in 13 sizes (four front and nine rear) covering a range of machinery from 1,000cc sports bikes to the smaller 250-400cc capacity bikes particularly popular across Asia.

The compound in the rear tyre has been tweaked and adapted for the smaller bikes with a focus on more wet grip as opposed to the high-speed stability of the larger sizes. But why did Michelin amend the grown-up version for the little bikes? It’s all because of the India bike market which currently demands 50,000 tyres per year but in five years Michelin are predicting 1m+ because of the increased popularity of larger capacity.

The architecture of the tyres includes an innovation which Michelin call ACT+ or Adaptive Casing Technology. It’s now patented and is claimed to be ‘probably one of the most significant motorcycle tyre innovations since the invention of the radial’. It’s all about how the rigidity of the tyres adapts to different circumstances thanks to its single, variable-angle casing ply ensuring both straight-line and cornering stability.

Here’s a little video to explain:

Almost. Our first workshop of the day was to set off in pairs for two laps, one on a KTM RC390, the other on a Yamaha YZF-R3 around a much smaller replica Losail circuit set out in the carpark. Surprisingly, the bikes were quick to offer grip from low temperature on the tight, twisty and dusty tarmac. Having watched the two professional Suzuki Endurance World Championship riders flying around with what seemed like unnatural levels of grip gave me the confidence to have my knee down on each side around the plethora of second gear corners before the first lap was out.

The agility of the smaller bikes was impressive. The nadgery little circuit promoted fast turning from left to right and the KTM that I was riding stood firm on the Michelin’s. At the end of the second lap we were encouraged to ride at 60kph in a designated straight line outside of turn 1 before braking as hard as possible on a freshly soaked tarmac runway. I did as was instructed instead of closing my eyes and hoping for the best, the level of grip from the front was incredible. In fact, there was so much grip that when I followed the instructions and grabbed as much front brake as possible, the rear wheel lifted stoppie-style…yep, in the wet. 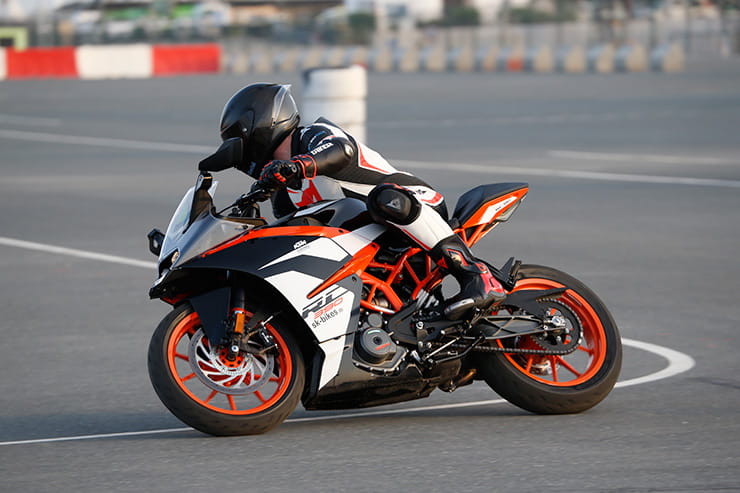 Onto the big bikes and first up was three laps on the predecessor to the Power RS, the Pilot Power 3. Attached to a Yamaha YZF-R1, the pace behind the Suzuki Endurance World Championship lead rider got quicker by the lap around Qatar's Losail International Circuit which has been hosting MotoGP since 2004 (under the lights since 2008).

The back-to-back test was just as it sounds. Into the pits after three laps and straight onto an identical R1 but this time shod with the new rubber. The heart of the Middle East is renowned for its in warm conditions and while the test took place in the evening when 3,600 light masts illuminated the 3.38mile Grand Prix circuit, the air temperature was still in the 20s. This of course doesn’t give a fair replication of a mucky, sub-zero, February morning in North Lincolnshire but beggars can’t be choosers, the Grand Prix circuit it had to be.

The main difference between the two sets of tyres was easy to establish; corner speed. Not that the predecessor was slow but the noticeable way in which the R1 gets turned faster was clear. Rolling over the crown of the tyre onto its shoulder was smoother meaning a quicker and more stable transition from upright to full lean. The Power RS tyres are a clear step up in quality and performance than the previous version.

Even picking the bike up out of the final, 2nd gear, right-hander and giving it maximum beans up into top gear along the 1 km straight was smoother allowing for a faster top speed, gaining those vital few tenths of a second when on a hot lap. This was further underlined with two further 20-minute track sessions.

The harder the front was pushed the more grip it seemed to find though my riding style tends to be more Casey Stoner than Jorge Lorenzo by pushing the limits with rear grip rather than front. With the throttle open to the stop and snicking through the quickshift gearbox of the BMW S1000RR, the digital speedo reads almost 300kph as the bike sits perfectly stable before grabbing the front brake and tapping the gears down to second for the long turn one right-hander with a late apex. The perfectly smooth transition from being upright and at near enough full speed to being banked right over for the first corner was impressive. The same can be said for the balance through the three third-gear fast right-handers at turns 12, 13 and 14.

VIDEO: On-board for a lap of the Losail International Circuit in Qatar

The dual compound (front: 16-68-16 percent, rear: 23-54-23 percent) has been designed and developed over two years. The central band provides the wet weather performance and stability while dry grip performance and agility is the job of the two symmetrical shoulder sections.

Running 30/27.5 psi was the recommendation and each bike was set as so. The line-up in pit lane for journalists to choose from was impressive as the latest, greatest sports bikes gleamed reflecting the beams of unnatural light against the dark, Middle-Eastern sky. Options included just one Ducati 1299 Panigale S, a Yamaha R1M and an Aprilia RSV4 among the R1s, S1000RRs and ZX-10s. After the back-to-back test, I managed to bagsie the Aprilia which had wowed me so much last year but seemed underpowered when driving out of the corners. On this occasion, the plaudits laid firmly with the BMW S1000RR I rode in the final session. This bike impresses me more and more whenever I ride it and the Michelin’s suited it too, complementing the bikes ability.

I’ll reserve judgement on the longevity the tyres have. After two sessions they were looking fairly second-hand so we’ll have to wait and see how they look after a couple of thousand miles of road use instead of being on a Grand Prix track. Michelin did state that the Power RS are a road tyre designed for occasional track use. At this stage I would suggest that if you rode to the track, competed five or six sessions, then rode home again they’d need replacing.

On track the tyres are predictable and safe. They were, as Monsieur Jean had said, allowing me to brake later and harder, turn faster and accelerate quicker. I tried and I tried to get them to move around, to become unstable, to let me down in the braking area but no, they stood firm. They are as stable as can be and while the BMW suited the circuit with its massive amounts of torque, power and agility, the tyres I felt improved the bike even more. They have earned a 10/10 from me, I’m really impressed. 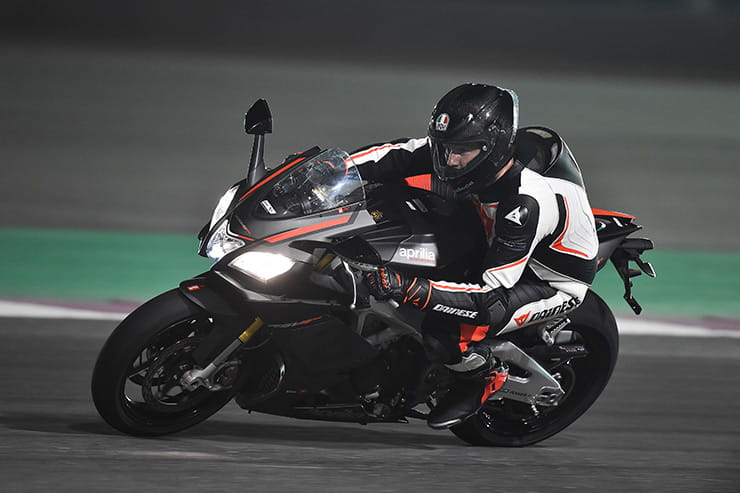