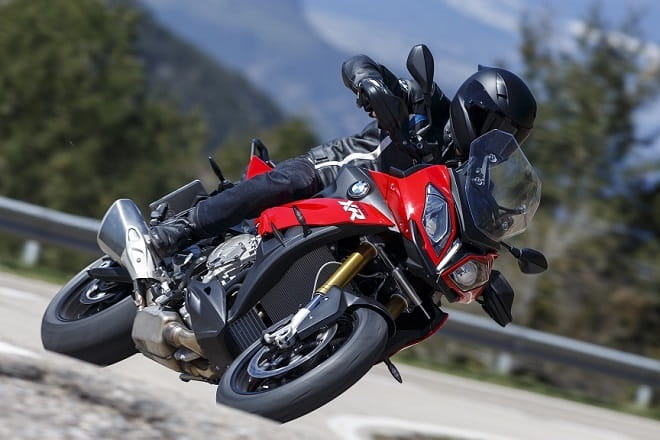 BMW calls its new S1000XR an “adventure sport” bike, and from the moment you set eyes on the tall, beaky bike until you’ve climbed aboard its high seat, pressed the button to fire up its four-cylinder engine and trod into gear, it makes sense that the adventure part of that label comes first.

But by the time you’ve let out the clutch, accelerated down the first straight and flicked the quick, light, sweet-handling XR through the first set of bends, it’s clear that swapping those words round to make “sport adventure” would give a much more accurate description. Sport is very much the priority with the XR, which is designed to carry two people and luggage in reasonable comfort, but whose character is very close to that of the super-naked S1000R with which it shares its 999cc, four-cylinder engine.

If there is such a thing as an adventure sport class, that’s largely down to Ducati’s Multistrada 1200, whose launch in 2010 opened up a whole new world of rapid, road-biased performance with a hint of dual-purpose style and practicality. The S1000XR is designed to compete head-on with the Multi, to the extent that not only does its profile mirror that of the Italian bike – albeit with some distinctive details including an asymmetrical twin-headlamp face that is pure BMW – but its weight and wheelbase figures are almost identical and it even comes in matching red or white paint options.

The engine is from closer to home because it’s taken straight from the S1000R, given a new four-into-one pipe and bolted into a new aluminium frame that is welded up from four separate sections. Up front there’s a pair of 43mm telescopic forks, with 150mm of travel against the R-bike’s 120mm. It’s a similar story at the rear, where the 140mm of travel is 20mm more than the naked four’s. The XR also gets a longer aluminium swing-arm that contributes to a fairly rangy, 1548mm wheelbase, and a rear subframe beefed up to hold accessory panniers and top-box.

The detuned S1000RR engine exactly matches the S1000R’s maximum output of 160bhp at 11,000rpm. And the good news is that the XR, which at 238kg with a full tank is 21kg heavier than the naked bike, provides very nearly as much of the instant, arm-yanking, free-revving performance that makes the naked four so much fun to ride. Its fuelling is flawlessly crisp, low-rev delivery is smooth if not exactly stump-pulling, and from about 6000rpm the BMW kicks harder to deliver a storming surge of acceleration, along with a tuneful and occasionally crackly note from the stubby silencer.

The motor loves to rev, too, inevitably not matching the top-end charge of the RR but still ripping rapidly to the 11,000rpm redline through the gears as the bike heads towards its top speed somewhere north of 160mph. That is made all the more enjoyable if the XR is fitted with the optional Gear Shift Assistant Pro quick-shifter, which like the S1000RR’s version changes both up and down through the box, effortlessly adding a perfectly timed throttle blip when required.

The shifter comes as standard if, as most buyers will (if sales patterns with almost every other BMW model are followed), you opt for the highest specification of the three S1000XR models. The standard XR, which costs £12,400, comes with two riding modes and basic traction control and ABS. For £13,645 the Sport version adds a sharper Dynamic riding mode, more sophisticated DTC traction control, plus cornering ABS, heated grips and cruise control. The top-spec Sport SE, at £14,750, comes with centre-strand, pannier brackets and rack but its main benefit is Dynamic ESA semi-active suspension. 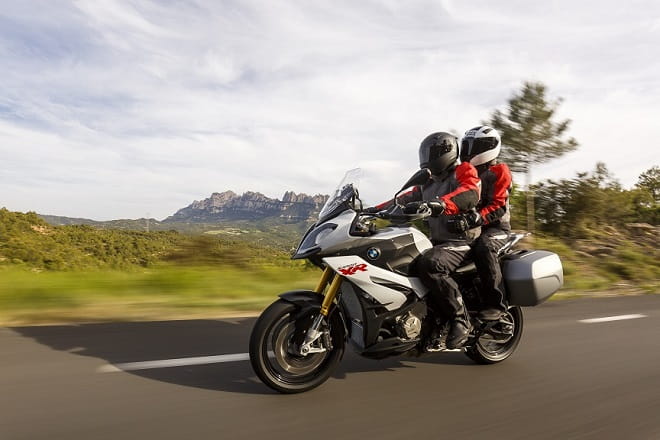 Where all three versions of the XR gain over both the S1000R and RR is in the combination of wind protection at high speed and low-speed comfort delivered by the wide-barred, upright riding position, which pretty much mimics that of the R1200GS. At 840mm its seat is 10mm lower than the boxer’s lower setting, though unlike the GS seat it can’t be adjusted. Shorter riders have the option of a lower seat (by 20mm for free; by a further 30mm via a £175 kit) and will also benefit from the fact that the XR is roughly 10kg lighter.
Being tall I didn’t have a problem with manoeuvrability and was moderately impressed by the  protection from the screen, which follows the R1200RS equivalent by being quickly height-adjustable simply by grabbing it and pulling up or down by 60mm. At speed it kept the wind off my chest but generated some turbulence that might become annoying on a long trip, when at least the standard fitment hand guards might come in useful.

The XR’s light weight also benefits its handling, which is outstandingly flickable. The launch bikes, which were all fitted with Dynamic ESA suspension, were brilliantly easy to carve down the twisty launch route near Barcelona, requiring minimal pressure on those wide bars to instigate a change of direction, yet staying stable with the help of a steering damper. The semi-active system comes with two settings, Road and a firmer Dynamic, and both gave a ride that was well on the firm side for a bike with pretentions to be in the adventure class.

That was fine in Dynamic, when the BMW also steered with very impressive precision. I was slightly less impressed by Road mode, which didn’t seem to make the ride much plusher, but allowed the bike to sit slightly lower at the rear, which took the edge of its cornering poise. Adding some shock preload helped slightly but most of the time I stuck to Dynamic, enjoying the way the Pirelli Diablo Rosso II tyres made the most of the generous ground clearance.

Another feature the XR (or at least its Sport and SE versions) shares with the Multistrada is cornering ABS. The basic stopping power available from the Brembo blend of 320mm discs and four-piston radial calipers was impressive, made more so by the knowledge that in an emergency it should be possible to haul on the anchors in mid-turn and let the lean-angle-sensor work its magic, as it does with the S1000RR-style traction control.

The launch route involved such universally superb roads that it was possibly a bonus that several of us got lost for long enough to experience a burst of duller riding. The XR cruised in a straight line feeling respectably relaxed, and stayed comfortable with the help of its broad seat. Mostly hard riding brought fuel consumption down to 35mpg and the 20-litre tank’s range towards a less than generous 150 miles, but many riders will do better. 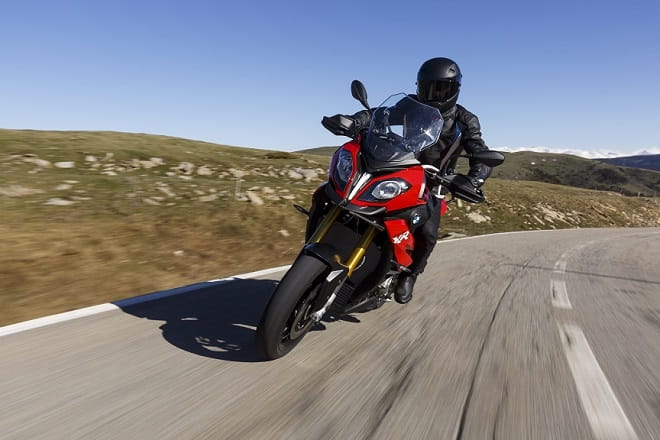 The S1000XR would need plenty of stops on a long trip but it’s a bike that would respond well to being loaded with pillion and luggage, and aimed at some far-off destination. It would get there in reasonable comfort, and would be a lot of fun along the way. The XR might be more sport adventure than adventure sport, but either way it’s a quick, fine-handling, versatile machine that looks set to give the Multistrada a serious run for its money. 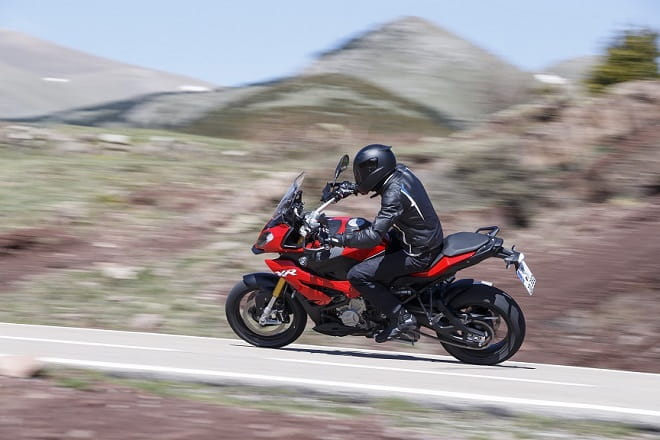 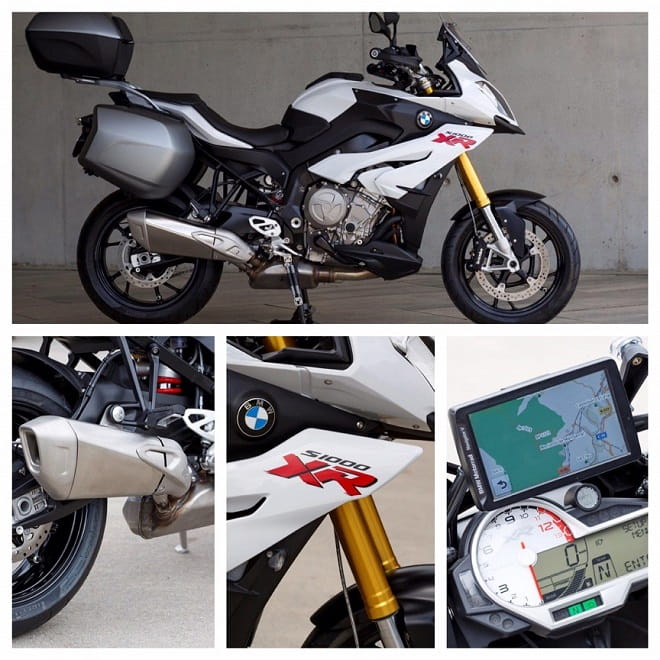 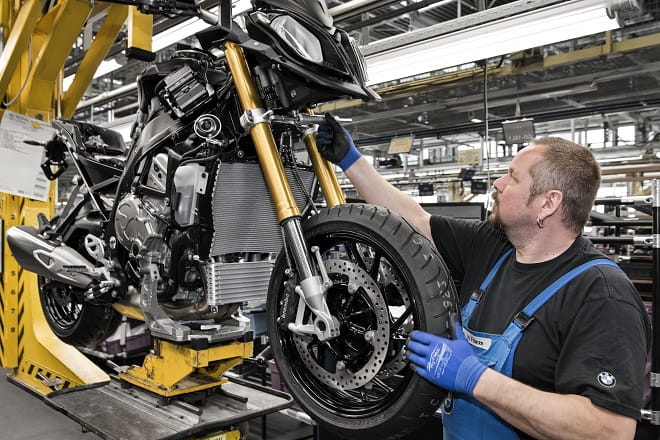