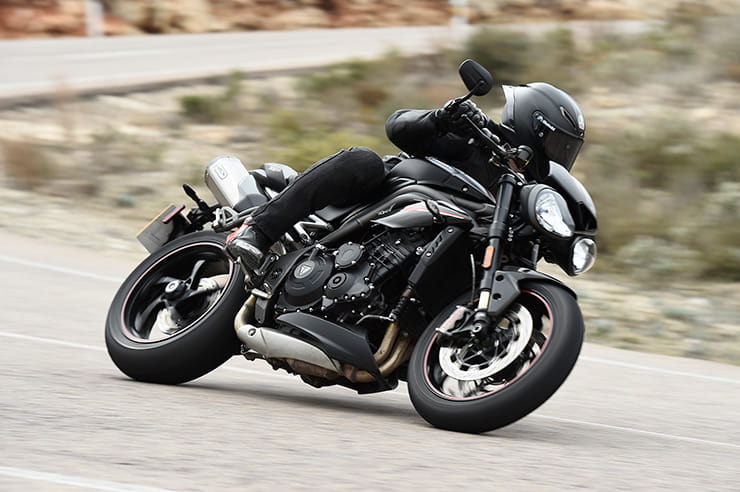 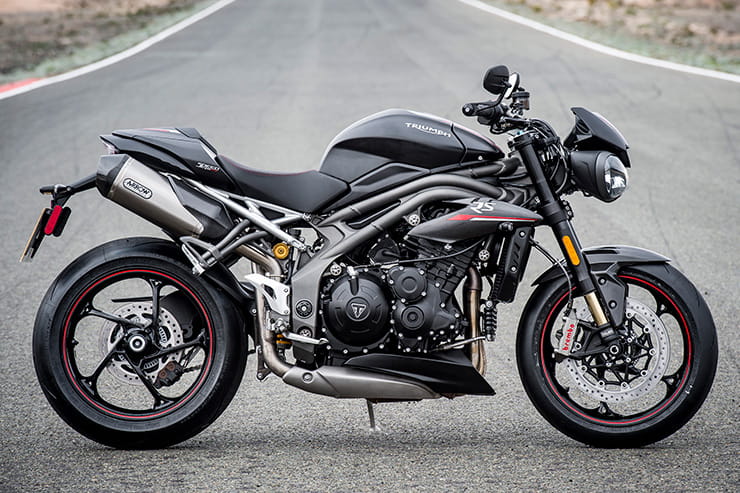 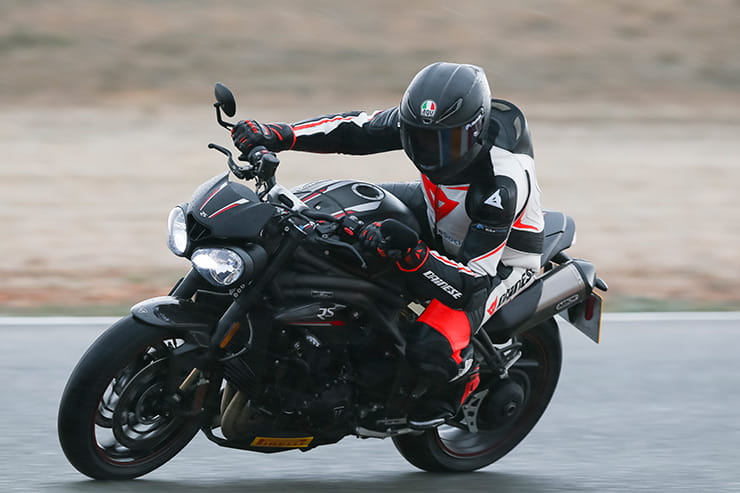 Triumph’s new two-piece Speed Triple range for 2018 comes in an ‘S’ and an ‘RS’ format and they both carry significant upgrades to the outgoing ‘16-‘17 model…but with a price tag to match.

The popular naked retains its a 1050cc triple cylinder heart which has enjoyed a significant overhaul to enhance power from 138bhp to 148bhp while the overall package has shed 3kg. Its electronics have been boosted too with the inclusion of the 5” TFT display and latest generation switchgear already seen on the Street Triple.

It’s the sporty, stubby yet stylish bike that put Hinckley Triumph on the map back in ’94, taking the street fighter revolution straight to Ducati and their Monster but does the latest slice of prime British beef continue to live in the higher echelons of the popular naked class?

The ‘S’ is available for £11,350 in Jet Black while the Crystal White will be an extra £125. The ‘RS’ is £13,250 for either of the two colour options; Matt Jet Black or Crystal White. Both models will be in dealerships by late-March.

Both power and torque have been supersized with the headline figure of an extra 10bhp over the outgoing model taking the 2018 incarnation up to 148bhp, representing an increase of 7%. Its peak power also comes later in the rev range at 10,500rpm. In fact, from as little as 4000rpm the new bike exceeds the old one on power figures as the triple bellows poetically all the way to 11,250rpm. It’s easy to hit the limiter because the sound is sooooo delicious – deeper than before with a hint of aggression too. To be frank, anything nearing full throttle at 6-6,500rpm and above and you’ll be having an absolute ball. It’s top entertainment. Though it could be argued that competition in the form of BMW’s S1000R or Yamaha’s MT-10, which are nearest in terms of spec and price, are fruitier…and dare I say it, even more lairy. Even so, I believe the Speed Triple to have been developed for those not wishing to crunch through the miles at teeth-gritting pace but instead for those who enjoy a little refinement for a more relaxed pace but knowing there’s an destructive side ready to be unleashed should the opportunity require. The German or Japanese entrant might be on the erratic side of crazy but they still have the type of character that gives you something to talk about or even boast about. 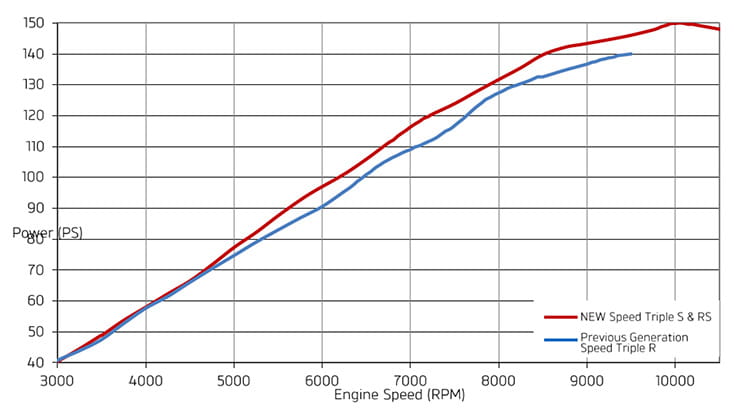 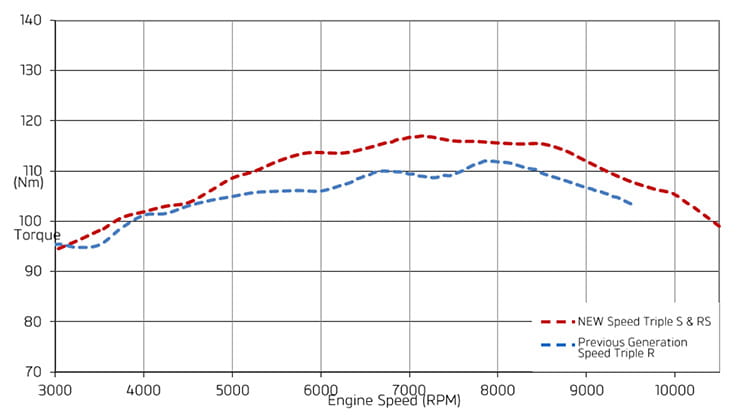 Torque is also up by 4% at its peak around 7150rpm (lower than the 7850rpm on the outgoing model) from 112Nm to 117Nm but its noticeably higher throughout the whole rev range which gives it an almighty amount of poke. Snick a gear down for an overtake reaps rewards with the input of sudden oomph but also the deeper, more rebellious bellowy howl from the Arrow end cans – standard fit on the RS.

When questioned about why the bike ‘only’ makes a peak power figure of 148bhp (‘only’ compared to rivals, that is), the men from Hinckley said they’d “rather concentrate on style, technology and rideablity.”

Realistically, for everyday riding you wouldn’t want for more power. 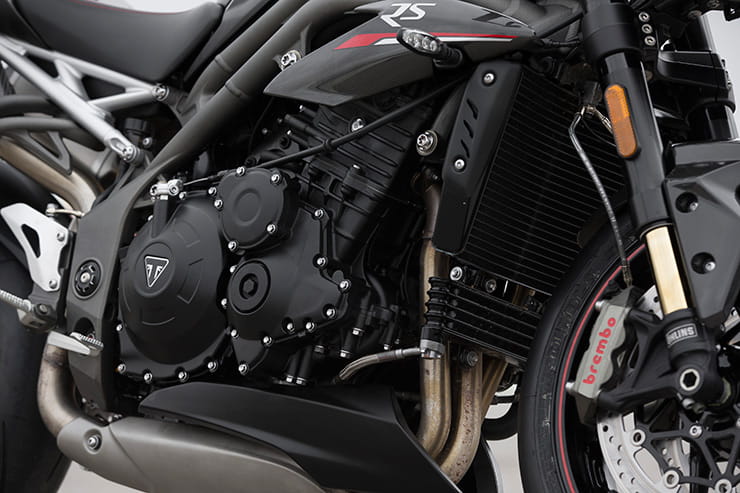 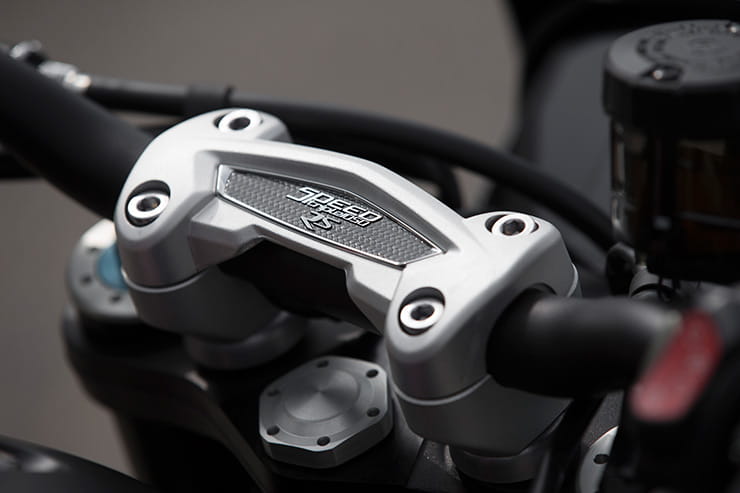 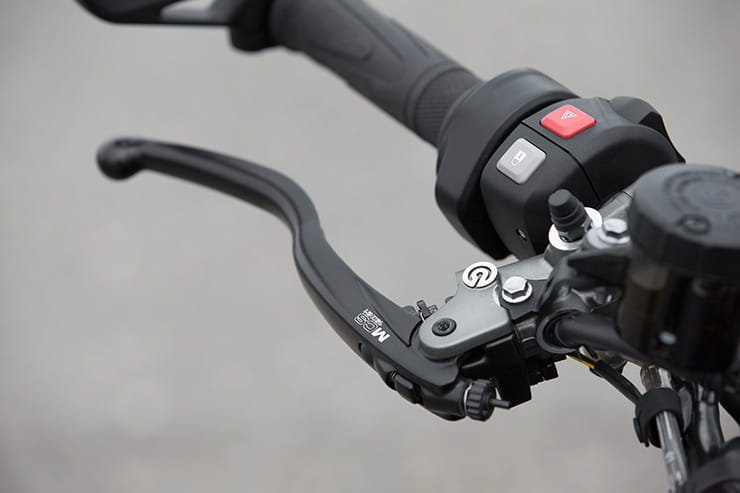 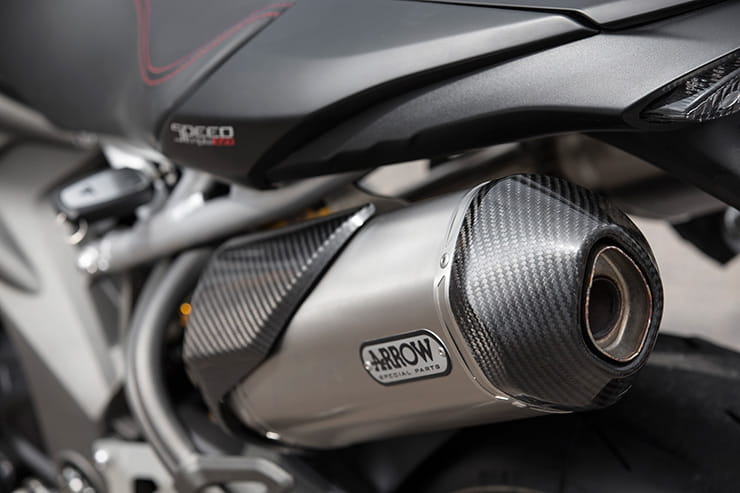 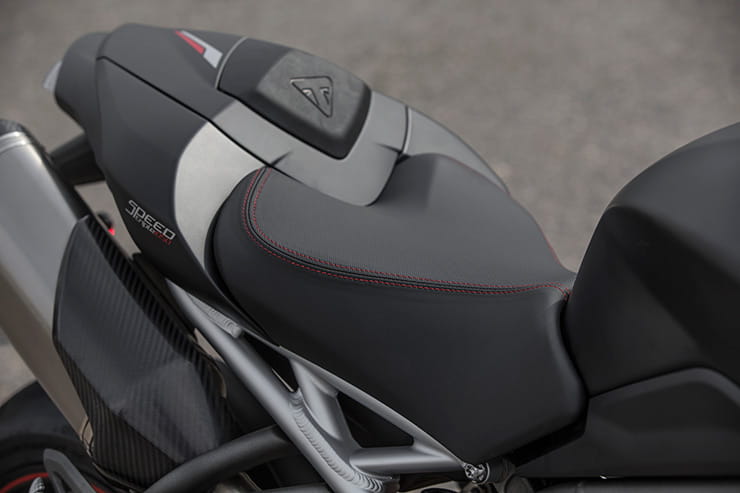 A new cylinder head is largely responsible for the increase in power and torque. Apparently there’s improved porting for better gas flow and a higher compression ratio at 12.92:1, up from 12.25:1. The engine also gets new pistons and lighter Nikasil-plated liners, plus a lighter crank gear and smaller starter motor. The alternator is lighter than before, and so is the battery. Externally there’s a new sump and by re-routing the oil passages to the cylinder head, Triumph has been able to remove the visible oil pipes of the old engine.

Thanks to the lighter internals it spins up faster than before, as well as having a higher redline.

Altogether, Triumph counts 105 new or redesigned engine components. But it hasn’t stopped there. The exhaust is also new, with a larger catalytic converter and lighter header as well as redesigned silencers for the ‘S’ version. The ‘RS’ comes as standard with lightweight Arrow cans. 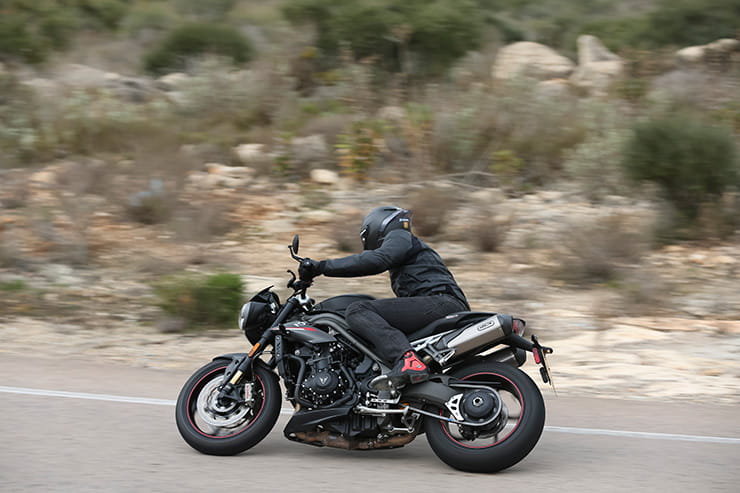 Incidentally, when the 2016 model came out, Triumph told us about 104 new or redesigned engine parts – so is that 209 in the last two years…or have the same parts been replaced?!

Even though the quickshift and autoblipper are not standard, the gearbox itself and the slipper clutch have been given a little TLC and I found them perfectly harmonious. Shifting is sharp, accurate and completely worthwhile if only to listen to the exhaust note. Not too sensitive either so I didn’t find myself accidently shifting if waving a foot nearby. The Arrow end-cans on the RS model are part of the new freer-flowing exhaust system with a larger catalyst and lighter headers and are a brilliant inclusion as standard.

The 1050cc engine is a tried, tested and popular power-plant which has lived in the Speed Triple since 2005 which was also the year when the underseat exhaust pipes made their debut.

From its 15.5 litre tank, Triumph claims the Speed Triple will offer 54.3mpg which is the equivalent of a 185-mile tank range although on the press ride – which aren’t a true reflection of an accurate economy figure – I achieved 45.8mpg which works out to be 146 miles per tank.

Triumph have retained and refined so many familiar Speed Triple characteristics over the years and none more so than the sublime handling of this sporty little naked. The twin-spar aluminium frame and single-sided swingarm are once again acquainted with some high spec tech from Pirelli, Ohlins and Brembo. Diablo Supercorsa rubber are sublime in the driest conditions and even on some of the patchy drying roads. Though on the greasy Spanish white-painted road markings when the rain came later in the day, the Pirelli’s were not the tyre for the job. On the RS model, 43mm Ohlins NIX30 upside-down forks and TTX36 twin tube rear monoshock, both are fully adjustable for preload, compression and rebound, kept the Triumph and me comfortable throughout the day.

As before, both variants have Brembo Monobloc calipers at the front, grabbing 320mm discs though upgraded brake pads make the powerful brakes even better and the RS is even fitted with cornering ABS for the first time, courtesy of its new Continental-developed IMU (inertial measurement unit). The new bikes both have five-spoke high-gloss wheels instead of the 10-spoke design used on the previous versions. 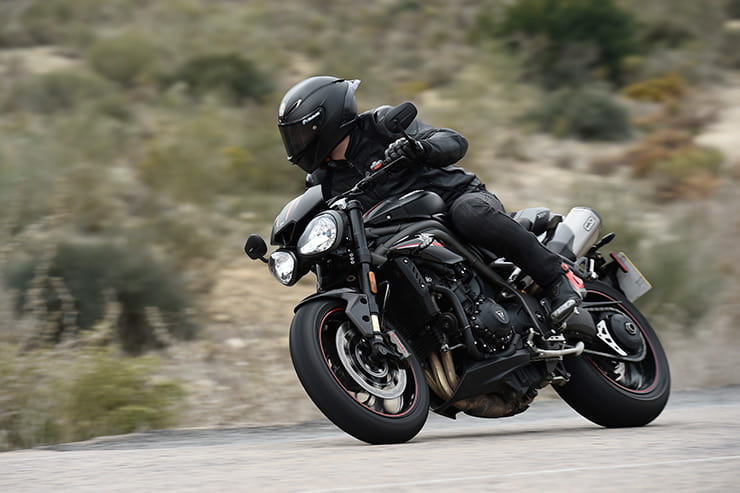 Pummelling around the silky-smooth tarmac ribbons that dissect the Spanish mountains north of Almeria, the Speed Triple RS was right at home with its energetic enthusiasm for gobbling corner after corner interjected with a squirt of raucous power and a dab of brake before pointing and shooting at the next apex. Darting from side to side around fast 2nd and 3rd gear felt like home territory with direct and positive steering. At the end of the spirited ride a fellow journalist posed the question, “with roads like that, why aren’t there more Spanish TT riders?”

He had a point. 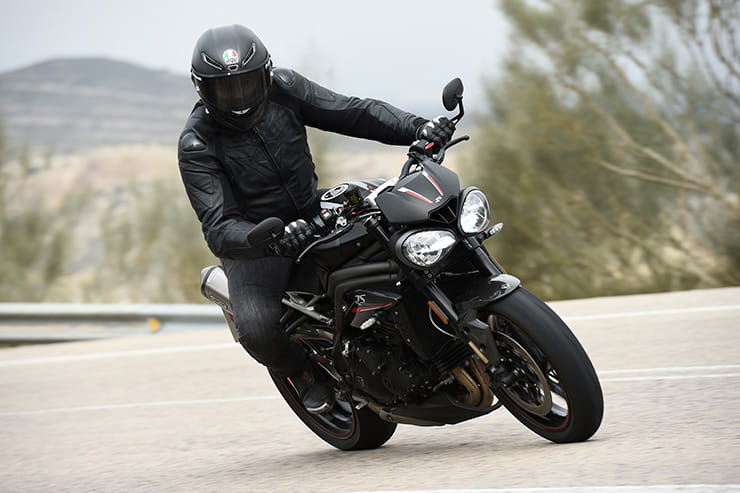 With a dry weight of 189kg, it’s the heaviest bike in its class even with the 3kg weight saving. It’s a negligible amount but every kilo saved leads to increased agility and better handling; boxes the Triumph has well and truly ticked. It doesn’t feel lardy when being coaxed around the quick twisty bits and I dare say an even lighter version would have been a little skittish. Though lighter weight alloy wheels and maybe a steering damper could further enhance the Speed’s agility.

For a naked machine the minimal fly screen shrouding the new instrument panel does a deft job at deflecting wind at sub-motorway speeds. Then, with the new cruise control system set to 120kph, the buffeting is noticeable but not too annoying.

The 825mm high two-piece seat is very comfortable and benefits the riding position which also remains unchanged. The seat isn’t adjustable but a 20mm lower-seat is available via the 50+ accessory range. It’s narrow enough at the waist to allow shorter riders easy access and enough confidence to handle the bike.

Typical of Triumph, it’s a clever riding position with an ideally situated foot pegs and handlebar layout. Having covered the best part of 160-miles during the press ride (though not all in one go), I would have been more than happy to carry on. 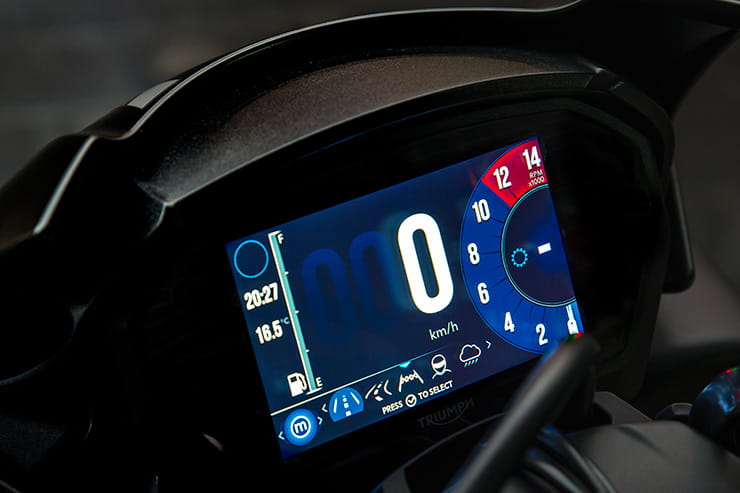 Engine aside, Triumph has put effort into improving the bikes’ electronics. The new TFT colour dash was already evident on the Street Triple and new Tiger range.  It’s five inches across and includes all the usual information and adaptability that we’re getting used to from such LCD displays. It’s an intuitive system controlled from the left-handlebar via a joystick. Given the rather gloomy conditions when setting off from the hotel base, I quickly flicked a button to enable High Contrast mode, brightening the dash.

Both Speed Triples also get Triumph’s latest generation switchgear including illuminated buttons, plus cruise control and a selection of different riding modes; four on the ‘S’ – rain, road, sport and rider-configurable – and five on the ‘RS’ which adds a ‘track’ setting as well. Rain curbs the power to 98.6bhp while increasing the traction control level. Switching down from a sportier mode is achievable on the fly but to improve performance by switching modes, well that can only be accomplished while stationary.

While switchable ABS is, of course, standard, the RS also gets a Continental IMU (inertial measurement unit) that enables cornering ABS and traction control. Other RS tech goodies include a keyless ignition and steering lock system. 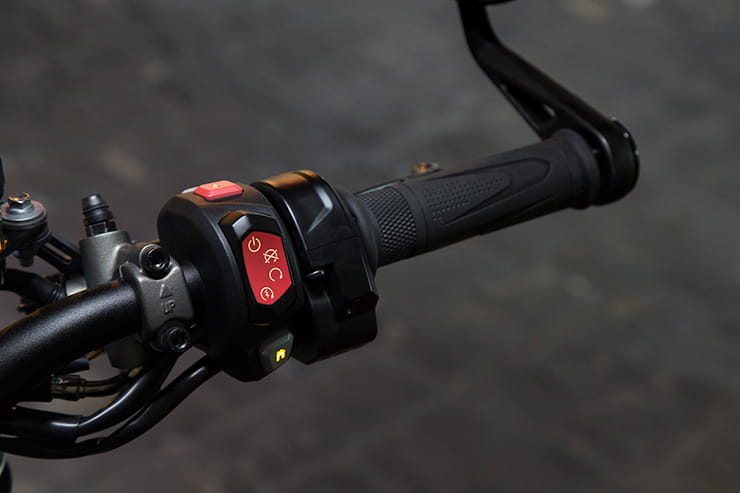 However, as comprehensive, efficient and good-looking as the electronics and equipment might be, I believe Triumph have missed a trick by not including the extremely efficient heated grips and a wonderful quickshifter / autoblipper system as standard – thankfully they were to the test bike. Then again, with prices at £150 and £250 + VAT and fitting respectively, it could have been the tipping point for some potential customers for the already pricey Speed Triple RS. 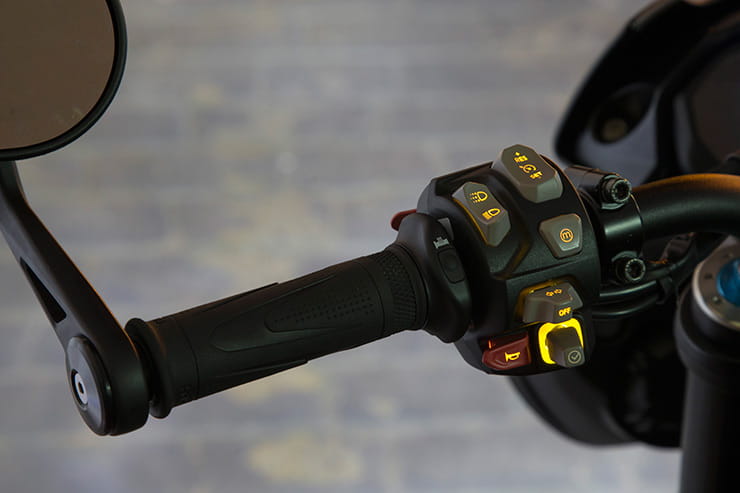 Chief Engineer, Stuart Wood, explained to me: “Not everybody wants everything. We spend a lot of time listening to existing customers and potential customers to understand what people want and what others don’t want.”

Meanwhile, new-age keyless ignition and steering lock is included on the RS but don’t tuck the key away at the bottom of your bag or jacket pocket because when you’ll be cursing at the filling station.

It’s very easy to look at a piece of paper comparing price, power and weight for example. But the proof is in the riding and if you’re matching the Speed Triple against a BMW S1000R Sport, Yamaha MT-10 (and SP version) plus Ducati Monster S then consider the handling, throttle characteristics, fuelling, build quality, equipment before making price-based assumptions. You know who you are, social media users.

The traditional Speed Triple styling is largely unchanged but the splash of carbon fibre on the mudguard and radiator cowls adds a bit of cool. It’s a comfortable and considerate yet crazy and charismatic machine that will suit its fans, if only its price tag had included those extra couple of bits. Not as loopy as an MT-10, is easy to ride and has the build quality, controlled gusto and a magnificent engine to boot.

Three things I loved about the 2018 Triumph Speed Triple RS…

• No quickshift/auto blipper as standard 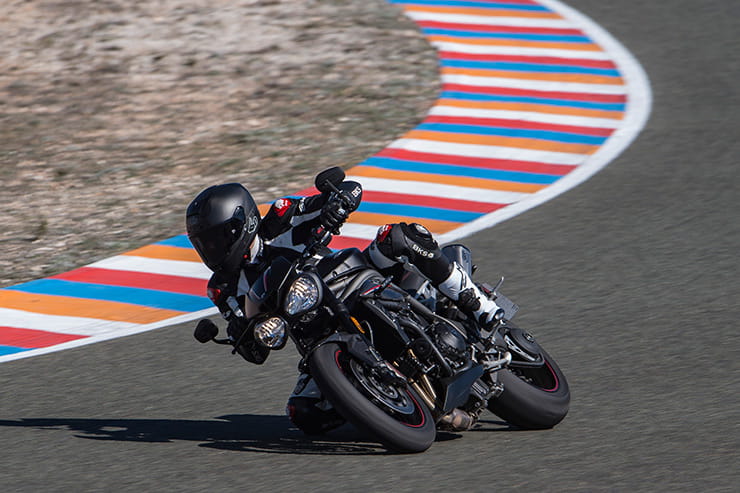 BSB star, Billy McConnell shows us how it’s done in the dry

What else do you get on the RS vs the S model?