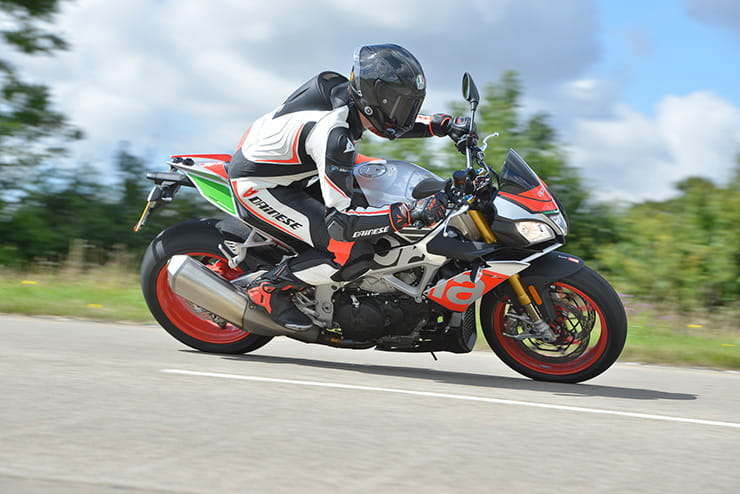 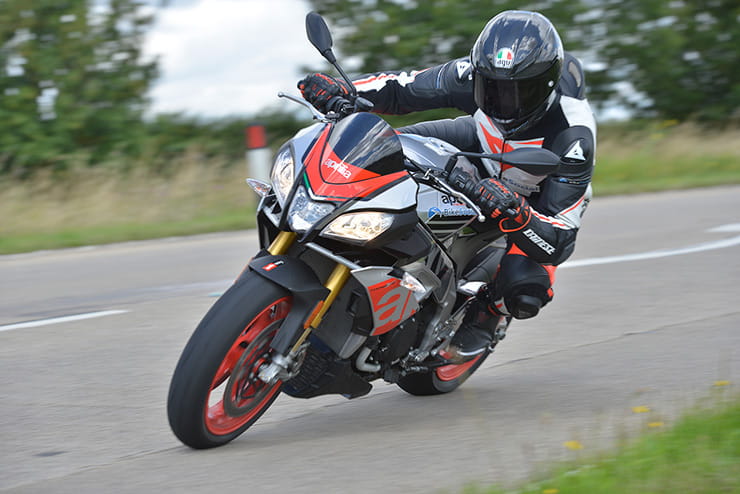 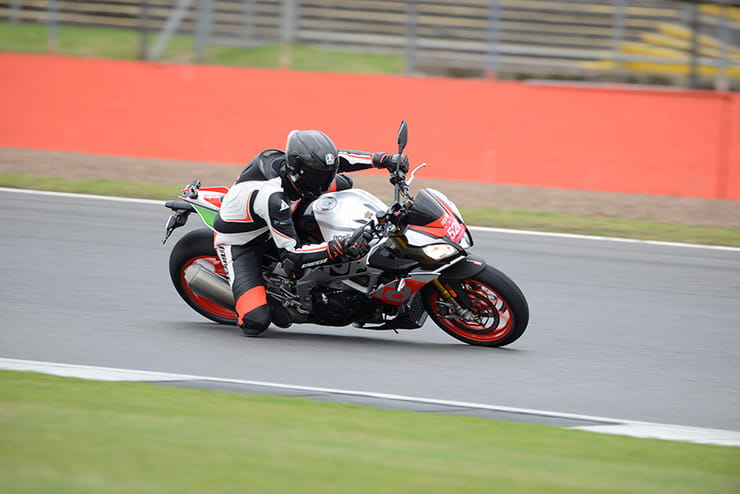 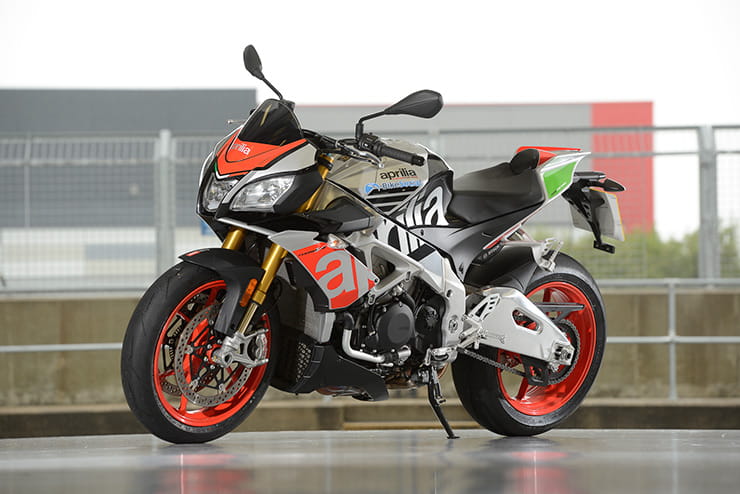 Over the last two and a half years just 783 Tuono’s have been registered in the UK. That’s registered, not necessarily sold. And considering how awesome the 1100 version of Aprilia’s monsterous super naked has been during that time and how many rave reviews it’s received, I’m surprised many more haven’t flown off the shelves. But why? Is it the dealer network support, the Italian manufacturers’ reputation, the lack of those coming into UK dealerships or simply the price?

With figures like that there is an added degree of exclusivity for the current owners, of course but is it the best worst-selling bike in the UK?

If you're looking to buy a super naked you not necessarily going to worry about how it looks perhaps as much as you would with the sports bike class, for example. With minimal fairing, a tiny screen and loads of exposed engine and frame it's not often regarded as a sexy class. Until Aprilia's V4 1100 Tuono came along in 2015.

Now feast your eyes on this Italian beauty, the heavily updated 2017 version. Slim and tall like a supermodel. Sleek and sexy with a rear end reminiscent of it’s even sportier sibling, the RSV4, with an added headlight surround and mini fly screen to accentuate the typically Italian sweeping lines.

Easily the best looking super-dooper naked bike, helped by the fact that it has the same genetic line that produced the RSV4 except with reduced fairing and raised bars – the original recipe for this class.

At first glance there doesn’t seem too much in the way new kit with the obvious exception of the rather large, 2.5kg (yes, really!) exhaust care of Euro-4, but look below the fairing and there’s a heap of modern tech to make the ride quality better, enhance performance and safety plus the information available on the screen more relevant. 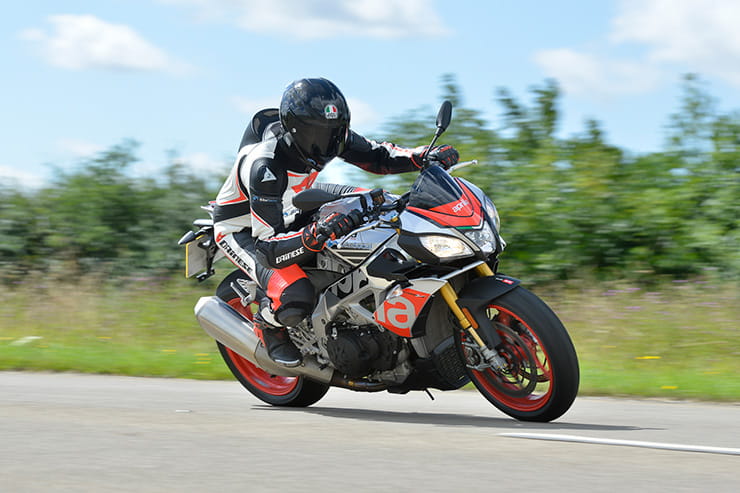 FROM THE TOP DOWN

A new full colour multimedia 4.3" TFT Bluetooth-enabled dash mixes in with new switchgear across the bars give a really new-age and futuristic feel. Pit lane speed limiter, anti-wheelie controls, traction control and ABS configurations have all changed and are accessible somehow by the plethora of buttons and switches – though the pit lane speed limiter and launch control are easier to operate and closer to your natural hand position than the indicators.

The cruise control function is fiddly to use and an instruction manual will be your friend here but the new electronically operated quickshifter and autoblipper for clutchless gear changes is a thing of beauty. Such a slick, crisp and effortless change – leaving the clutch only useful for coming to or moving from stationary. If the audio doesn’t give you a tingle each time you caress the gear lever, then the sheer pace increase will.

Maths was never my favourite subject but I know that V4 + 175bhp + quickshifter = awesome. Doesn’t matter who you are or what you ride, it cannot fail to impress.

The screen gives off a little computer-style whir when the ignition is switched on and the flashy graphics give you an indication of just how cool this bike is. The attention to detail with the sharp logo on a white background before the screen shows all the usual stuff – although (slightly worryingly) it’s very easy to scroll through the menu and see the highest recorded speed since being reset. Be warned!

New and lighter weight fully adjustable Ohlins 43mm forks and tweaked adjustable Ohlins shock offer a stiff but refined ride which is comfortable both on road and track enhancing front-end stability over the lumps and bumps. In fact, add into the mix the sticky Pirelli Supercorsa’s, a pair of massively powerful and slightly bigger 330mm front discs, Brembo M50 calipers and master cylinder and you have an athletic beast whose cornering ability contradicts its nakedness. Use the fast change of direction that accompanies the Tuono and plunge the front hard into a corner in order to feel just how poised and perfect the chassis with its top-end components all come together in a plush package.

The riding position is sportier than its supernaked rivals such as KTM’s 1290 Super Duke R and Yamaha’s MT10-SP with a further reach for the bars and a slightly higher footpeg position although we’re talking millimetres here. It’s still great for 150+ miles in the saddle which is about all you’ll manage out of an 18.5 litre fuel tank. 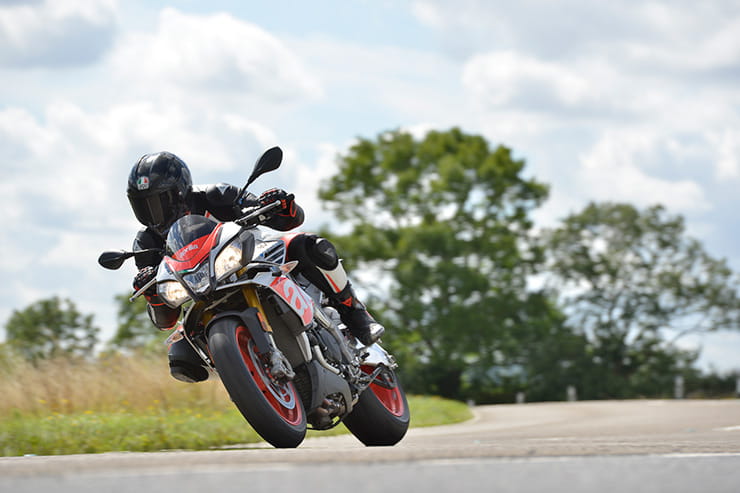 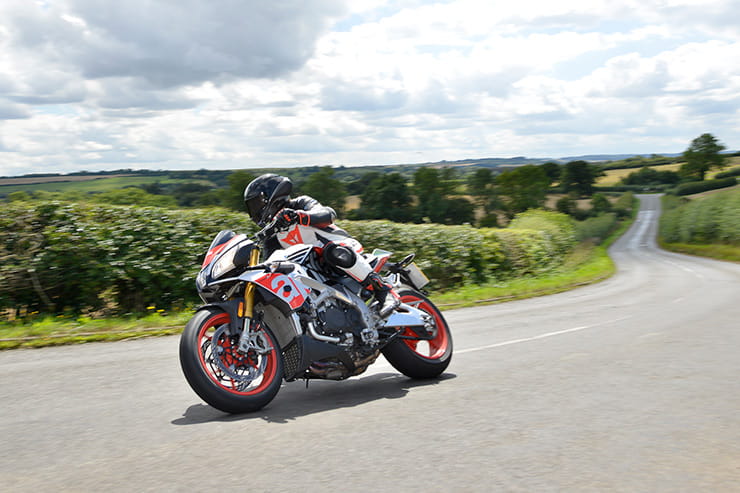 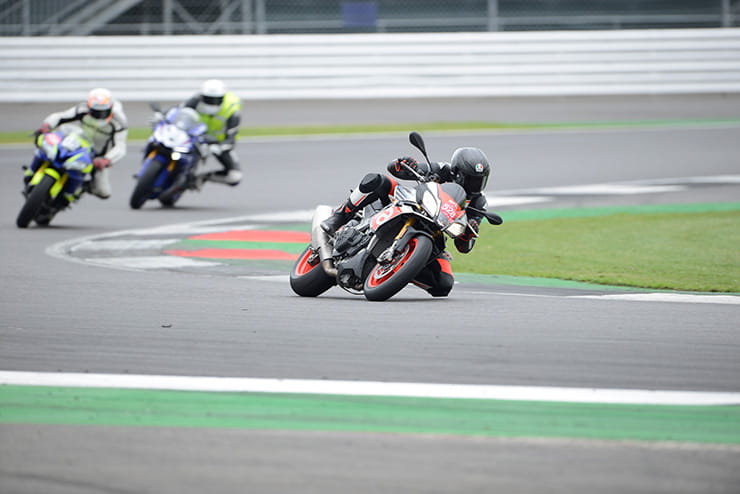 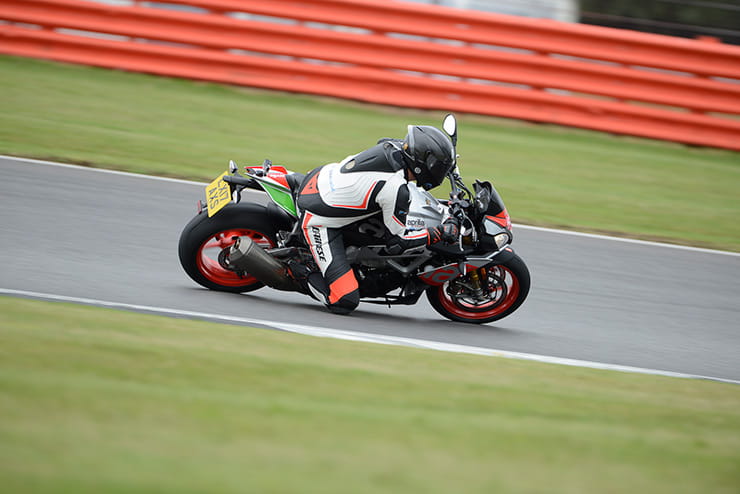 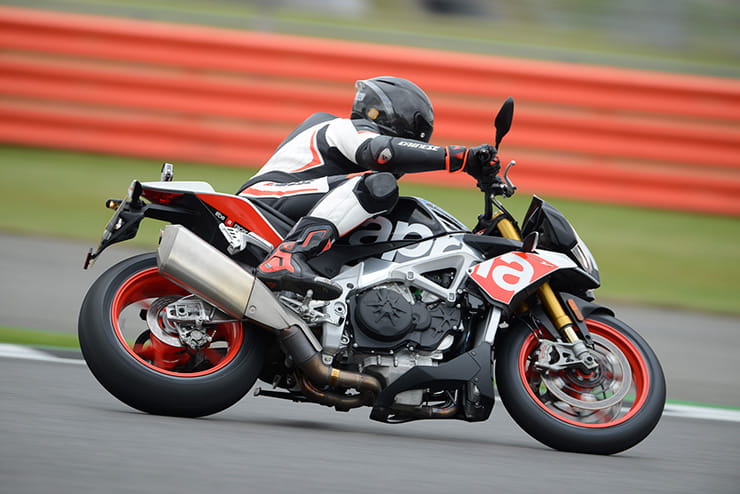 Sport, Track and Race are your three engine modes – and when the base mode is ‘Sport’, you know you have a weapon. Particularly when 175bhp @ 11,000rpm from the 65-degree, 1077cc V4 with is so readily available, it’s savagely good. Roll on in the mid-range, anywhere from 4-6,000…roll on in any gear and the bike comes alive – it really is remarkably licence-threatening, almost violent from 6,000rpm gripping and tucking to keep holding on. Each rider mode delivers full power but the differences are the throttle response and engine braking.

Aprilia has a pretty enviable racing pedigree stretching back over the years and with an RSV4 in its family, the Tuono was always going to be fantastic on track. I got a flavour of how all that performance, power and electronic upgrades on paper translated to the track so off to Silverstone I went for one of their own Bike Track Days. It allowed me to get a feel for how controlled the lunacy could be which wouldn’t be possible on the public roads.

The throttle response on track in the most aggressive Race mode is instant, with the right-hand bar at the stop along the Hangar Straight the bike ploughs through the revs, gears and speed, the tiny screen working hard to protect lardy old pilot from neck-ouch.

Mid-range torque for a street bike is bonkers both to feel and hear, and while the gearing is ideal for the roads, it’s hardly shabby on track either, pounding through the gearbox and up to an indicated 165mph by the end of the big straight. Through 6,7 and 8,000rpm it’s like Hannibal Lecter at a nudist beach, gagging for you to feed it more.

“Tuono” translates as “clap of thunder” and the vicious, throaty bark of the V4, even via that horrible exhaust, is still one that I can listen to all day. I think it’s seeking more gas each time I wind the Aprilia up.

At £15,999 it’s hangs a heavy price tag around its neck although I’ve seen some dealers knock more than £1000 off the RRP, even though the 2016 model sold like hotcakes at £13,995. For me it represents much better value and usability than its potentially more auspicious elder, the RSV4. That said, again I’ve seen brand new yet pre-registered bikes at £16,295, down from original asking price £19,999. It’s still a lot of dough but with an 18.5% discount on offer there’s potential for some serious bank account-related conversations to be had.

It’s easy to dismiss the product without knowing more about it, particularly relating to the quality of the components and the manufacturing process. After two weeks with the Tuono I had zero issues other than the exhaust, which is not even a thing, and the priority position on the switchgear of the wheelie control over indicators. That’s it.

Overall, I’m a little bit in love. The Tuono is an exceptional motorcycle. The mid-range torque from the V4 is worth listening too if nothing else, as you pop through the masterful, electronically operated gearbox which never misses a beat. Take an RSV4 at It’s a perfectly poised and practical road and track bike that can hold its head high as the undefeated king of the super nakeds. It’s certainly worthy of the hype if you can stand red wheels and the name of the manufacturer emblazoned across what’s left of the fairings. Best in Class? Better make that ‘Beast in Class’. 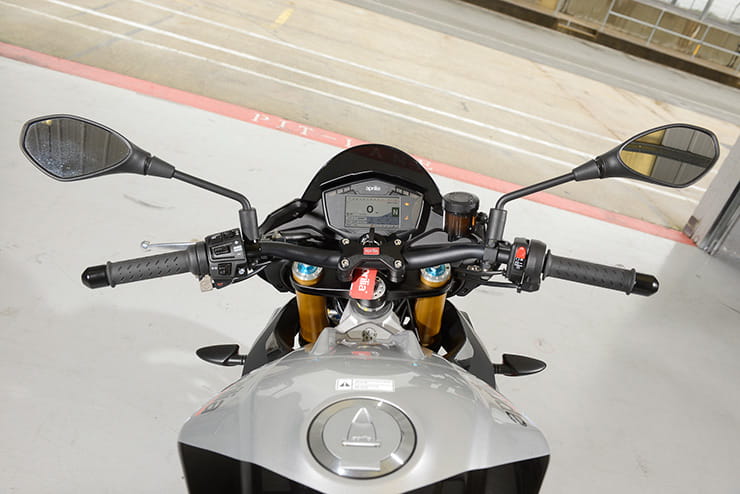 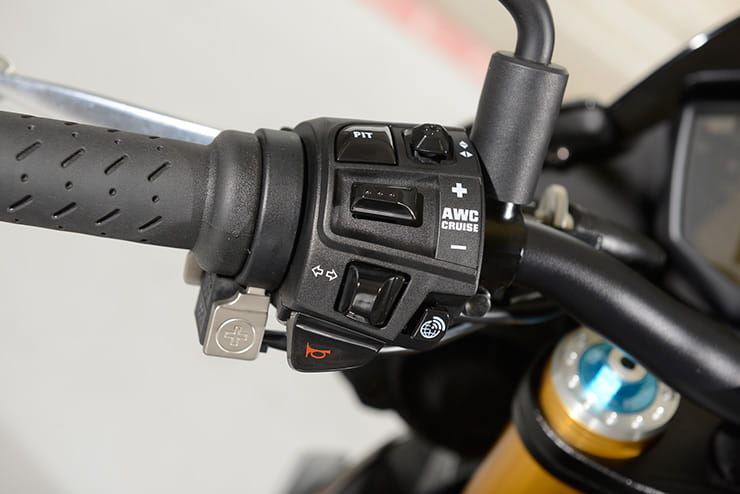 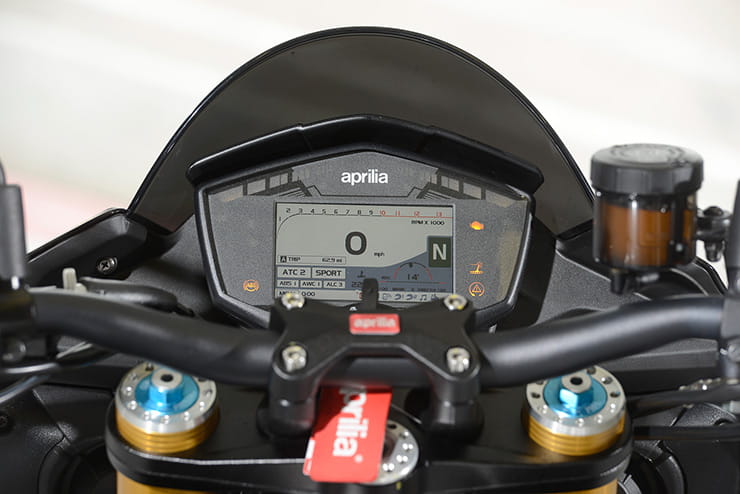 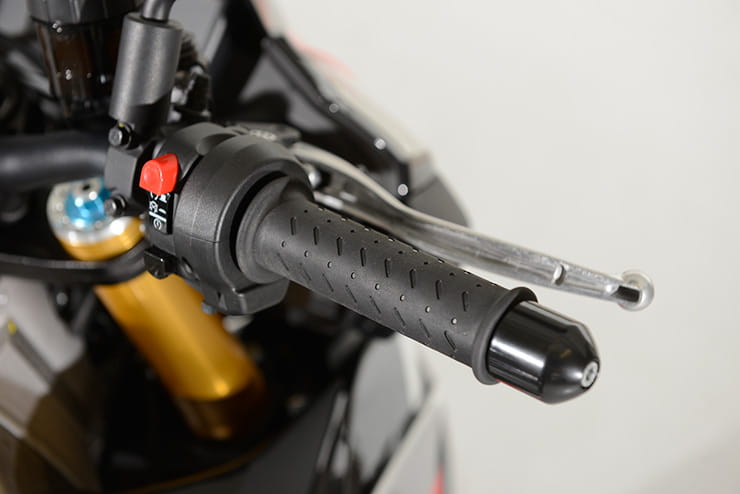 Owned 2013 model. Bought 2017 because of the advanced electronics package and revised gearing. People still hold the Italian bikes as having electronic problems but they need to try the new ones.

It’s useable around town because it's tractable and smooth but it has a split personality because get onto the open roads and you realise why the set-up of the bike is usable at speed. I have changed the rear sprocket by going three teeth up and the higher gearing transforms it.

I’ve ridden for around 6 years now, the last 3 of which have been on a ‘14 BMW S1000R Sport.  Last year I started looking for a replacement for the BM trying most of the 1000cc naked bike in the market, one of which being the 2016 Aprilia Tuono V4 Factory.  Here’s two reasons why I didn’t but it, and an additional one why I didn’t even try the 2017 model.

All that said the Tuono clearly is an awesome machine, if I had the money would I buy it as a second bike…definitely (although not from the same dealer)! 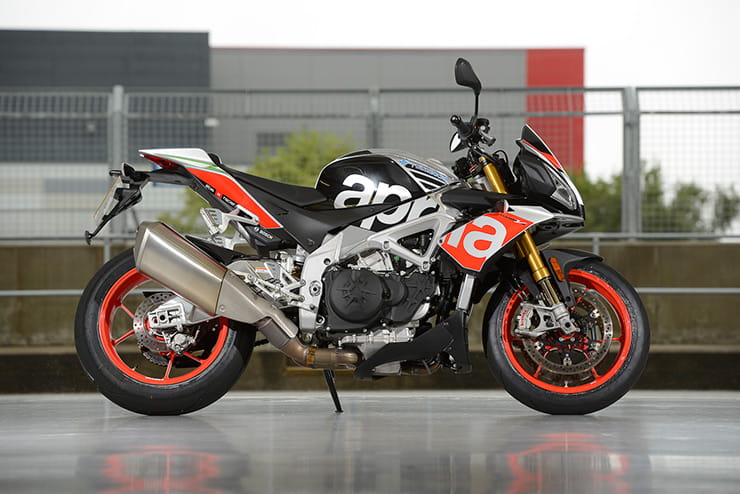 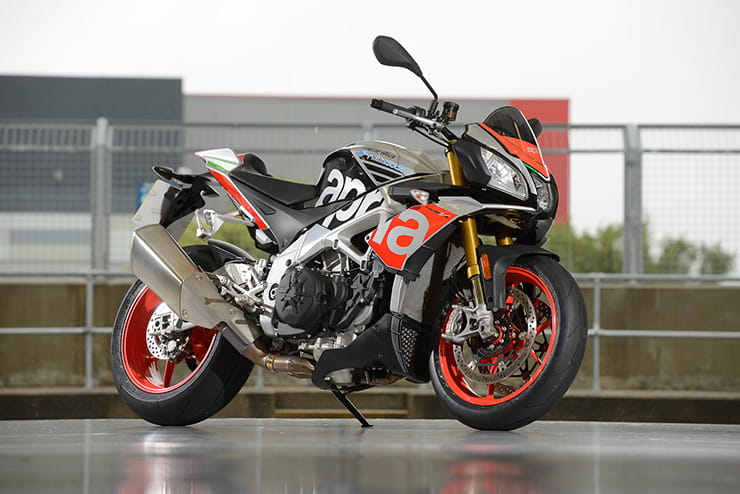 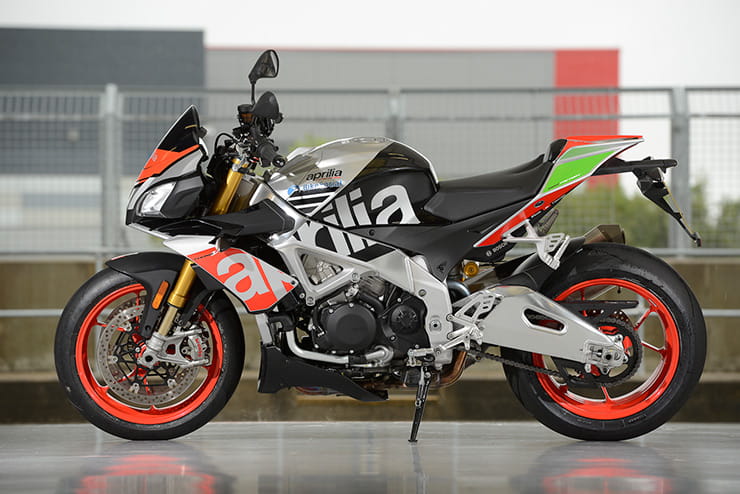 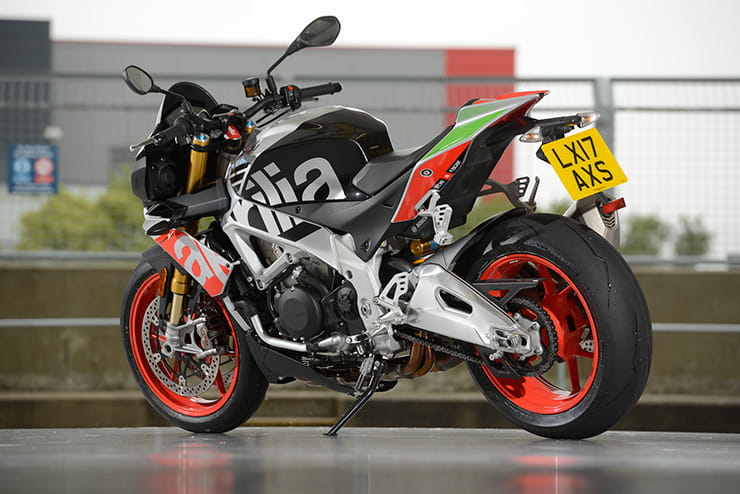 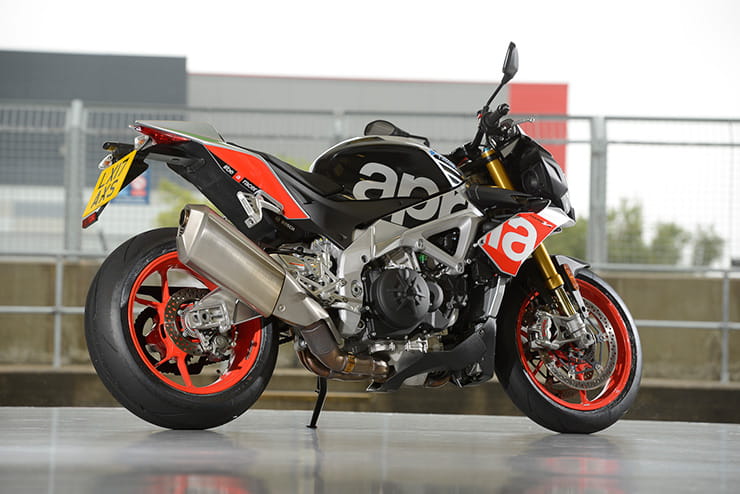 *Bennetts have 160 Tuono’s currently insured with an average premium of £194. 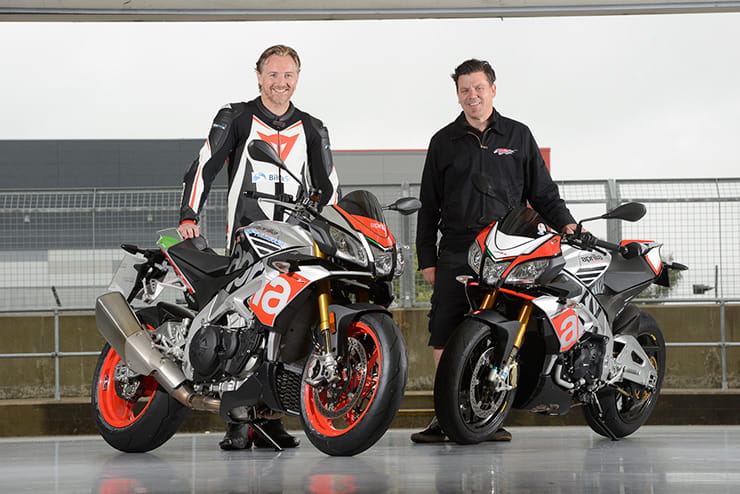 - The weather at Silverstone