If you’re looking for a do-it-all Ducati then the Multistrada is going to be an obvious and very wise choice. A thorough jack-of-all-trades and a master of many too.

It’s got all the power, 160bhp to be precise. It’s ideal for touring and covering big distances all in one go, commuting is a doddle and it offers a plush ride for a pillion too. But what if I wanted a sportsbike? I’m a sportsbike fan so what is there that can do-it-all but also wouldn’t be too shabby on track for the rare occasion when a legal thrash is required?

Oh yes. Thankfully, Ducati introduced the super sexy and stealthily slim-line SuperSport and SuperSport S at the beginning of 2017. A practical ‘sports’ bike for daily use, I thought. Then I saw the figure that we shouldn’t really concentrate on yet we all do; bhp. 113. Really? Was this a mistake?

A Ducati sportsbike hasn’t made ‘just’ 113bhp since the 916 which is now 19 years old. But hold on, the SuperSport is not about to oust the delectably precise and perfectly poised 959 Panigale, it has its own audience to target after all. Those who prefer to cover the miles in a little more comfort and aren’t looking to spend £1,000 on the additional 44bhp.

Just to clarify, Ducati have not made a competitor to its own model and you may have notice some inverted commas around the world sports, that’s because the SuperSport offers so much more.

No, this is more like a faired alternative to the Monster range, a sportier version of the Multistrada 950 with which it shares its engine, and a more practical motorcycle than the Hypermotard which also uses the same 937cc L-twin testastretta 11-degree motor, the same one that produces a rather modest 113bhp. It's not identical, but instead has revised crankcase and cylinder heads to make the ride that little more sporty. 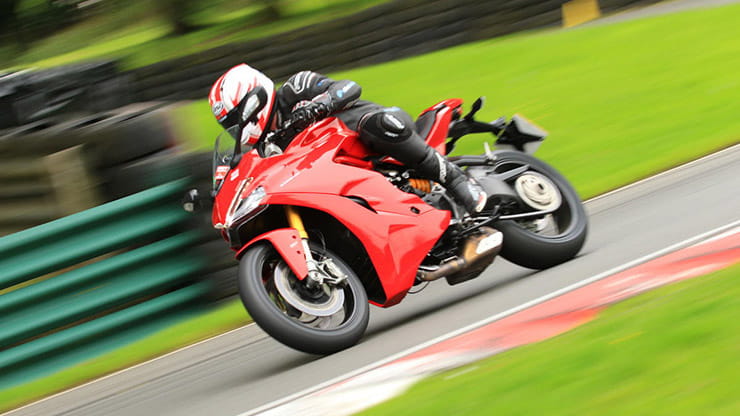 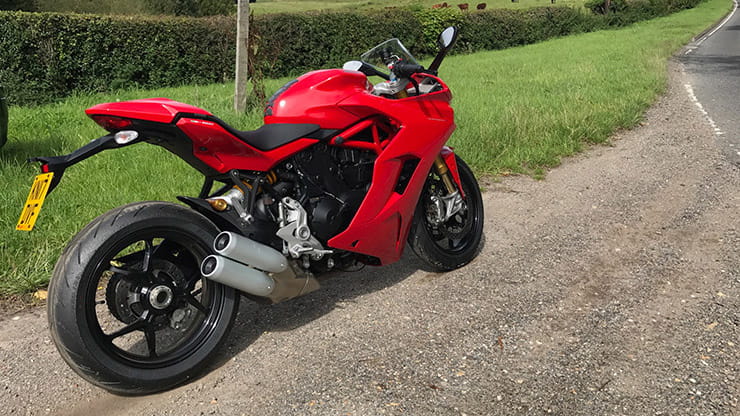 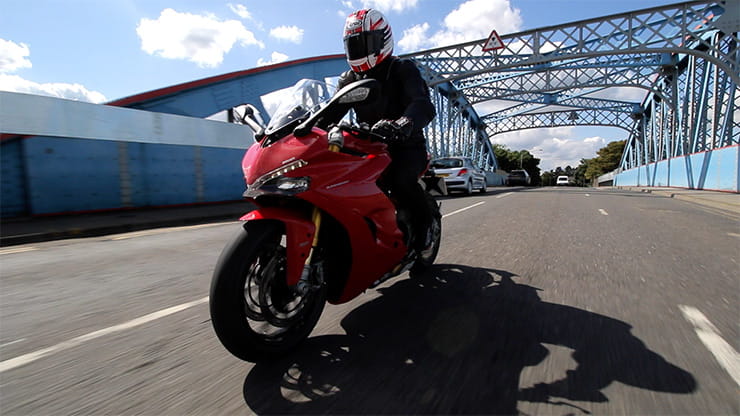 The ‘S’ model is laden with glorious tech including fully adjustable Ohlins front and back which is one of two main differences between it and the base model, which comes with Marzocchi forks and Sachs monoshock for £1,300 less than the £12,795 price tag of the red ‘S’ (white will cost £200 more! Must be something to do with the abundance of red paint they have at the Borgo Panigale factory). The other difference is the lack of a quickshifter and autoblipper. Seems to me that £1,300 represents excellent value for these extra components, especially when it comes to trading in or selling on.

So, the questions that need to be answered are:

Is the Ducati Supersport a B-Road blaster? 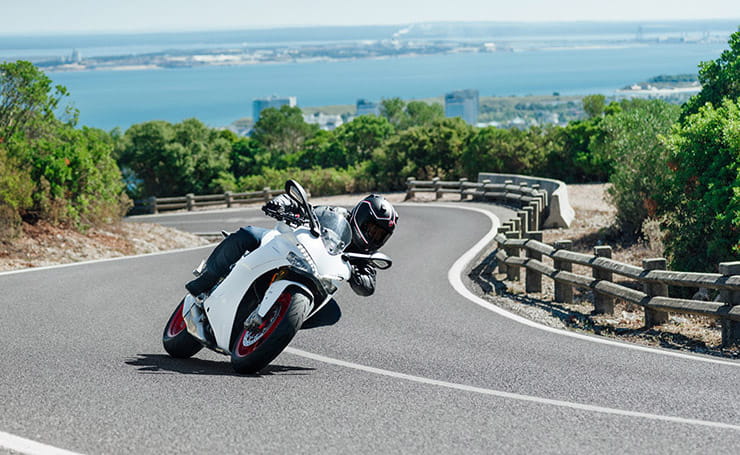 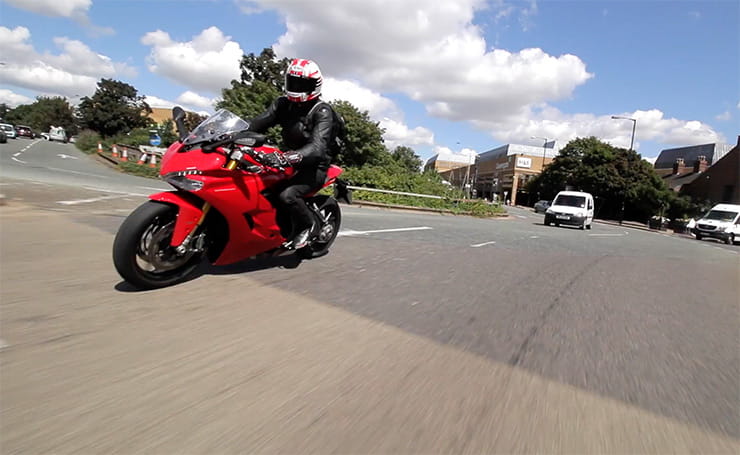 Having spent ten days with the Supersport S, the majority of the miles covered were on what I’m calling its home turf which is anywhere with corners, fast or slow, making the Ducati smile and therefore its rider. Yes, sure it’ll munch through the motorway miles with minimal effort but the sportier peg position doesn’t allow for maximum comfort despite the raised clip-on ‘bars. The seat opposes that theory because it’s pure luxury – while the arched back of the saddle that’s gently moulded around my buttocks provides the support, I’ve got no qualms in stating this is the most comfortable sports or even sports-touring machine I’ve been on in many years. It’s obviously and certainly less ‘wristy’ than a regular sportsbike but that still doesn’t eradicate any forearm feel (I’m hesitant to use the word ‘pain’). A lack of cruise control points to its sportier nature too, though Ducati would have us believe this isn’t the bike’s forte.

The SSS is a practical bike that happens to have touring credentials. The chassis is so sweet -  well-balanced and feels so much lighter than the spec sheet would have you believe. High bars and high pegs is not a usual combination for plush long distance riding but it is for a back-road hustle. Even with my 6ft frame, the wraparound seat and perfect poise of knees being tucked snugly in between the fairing and the fuel tank makes the Ducati a more than accomplished bike for this scenario. That said, the rubber mounts on the side of the frame do tend to dig into the inside of your legs.

On the road, it's more than happy cruising around in higher gears living in the lower rev range on its way to eeking out a range of 155 miles at around 50mpg. Max torque is made at 6,500rpm and the sweet spot in the range is anywhere between 3-6,000rpm, below that and the twin-cylinder motor will struggle to pull for an overtake. To make things easier, the Italians fitted a quickshifter and autoblipper for pain-free gear changes, although the system doesn’t feel as refined as some and requires a little more encouragement with a firmer prod.

The engine braking of the twin coupled with the hard-core twin 320mm discs that are controlled by top quality Brembos make for easy stopping, the lightest touch of the brake lever when you’re off the throttle and the suspension devours any unsettled road surface too,

Having covered an hour’s worth of home turf, I’d have been perfectly fine for another hour.

How is the Ducati Supersport on Track Days? 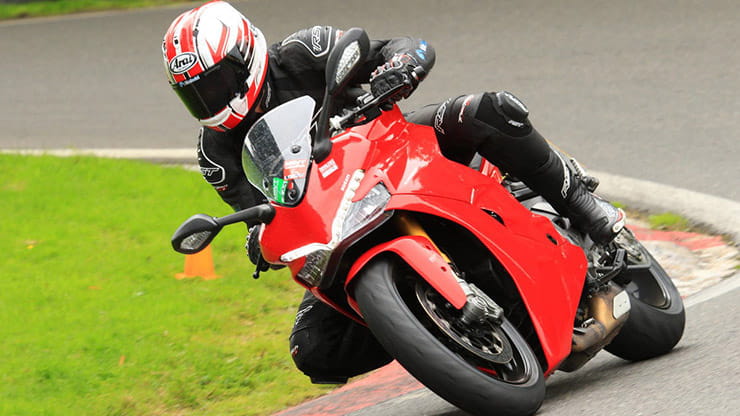 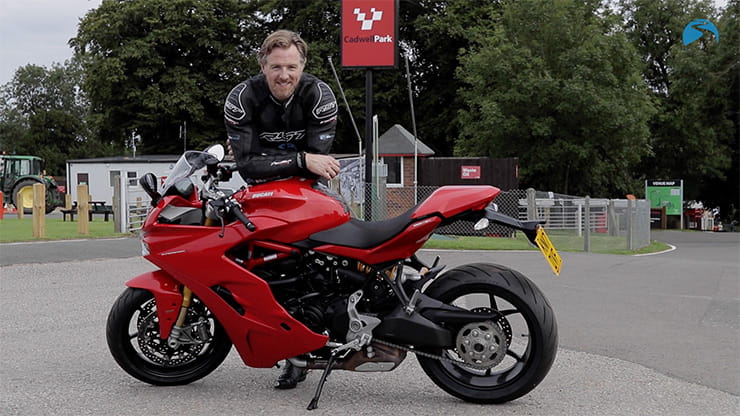 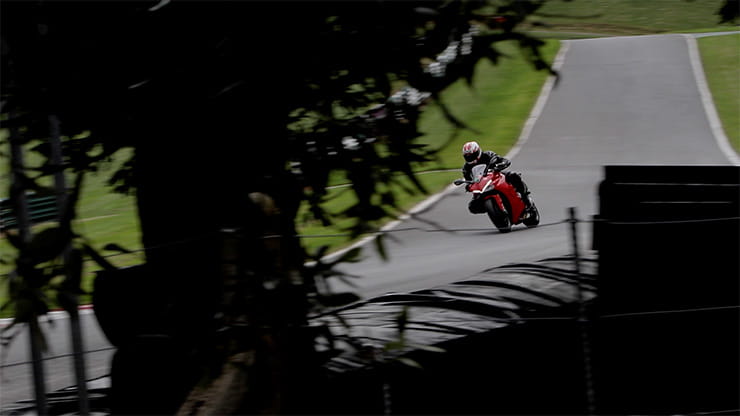 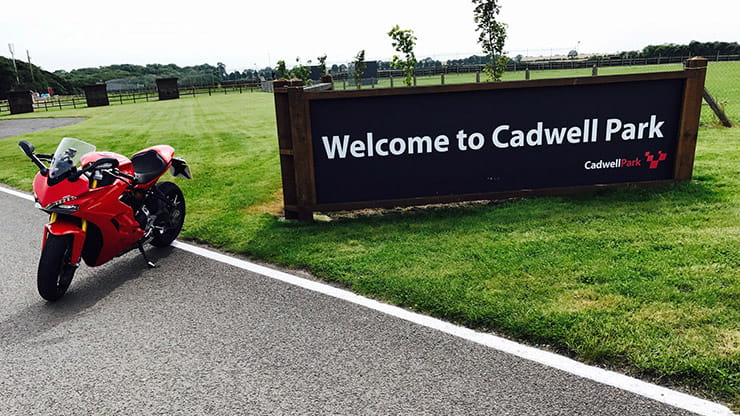 Ride to the track, ride on the track then ride home again. Easy.

The sublime handling chassis and narrow fairings come into their own once again soaking up the twists and turns of Cadwell Park and its constant change of direction. The 210kg weight is hardly felt as the bike gets to the apex with little persuasion and sits there too. Stable around the Gooseneck which crosses the crown of the track from cambered right to cambered left, the same goes for the flip-flop at the bottom of the Mountain and again through Hall Bends into the Old Hairpin.

Its top-spec components, featuring brands such as Ohlins, Brembo and Pirelli, are backed by the glorious L-twin soundtrack reverberating through the trees in the basin-like North Lincolnshire circuit. But, it’s a little underpowered for the not-straight Park Straight in the fast group and soon gets gobbled up.

The steering is sharper than expected and gets a thorough workout at Cadwell while the suspension gives a nice comfortable feel while on the track without being too bouncy. The Ohlins are adjustable as is the traction control, ABS and three rider modes (Sport, Touring and Rain). The hi-tech LCD dashboard is very easy to read and the left-bar mounted up-and-down toggle switch controls pretty much everything.

The motor begs for more revs and more power - even on Cadwell's short start/finish straight the quickshifter finds its way to 6th gear before dropping two for launch into Coppice. The track isn’t a natural or comfortable home for the SSS, Silverstone would be out of its depth but somewhere like Cadwell, Mallory or Brands Indy would cover the lack of out-and-out power, if that’s your bag.

The quickshifter makes mincemeat of the need to use a clutch but is occasionally not quick enough, leaving your left boot to be a little more direct than some of the systems we’ve been spoilt with over recent years. It then automatically matches the engine revs with its autoblipper functionality on the downshift.

OK, so it’s not as track-focused as a sportsbike but actually by taking onto the circuit I got to enhance the review a little more.

Is the Ducati Supersport good for pillions? 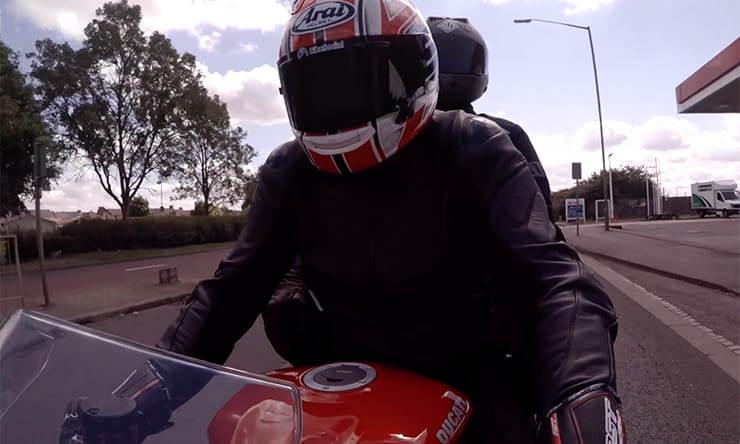 The view from the pillion seat when I picked my colleague John Milbank up was, “It’s actually a pretty comfy riding position. At a steady speed, I can let go of Michael. We’ve not hit any bumps. I’ll just rest my fingers on the tank and arms around the side of the rider. The position on the seat and pegs, I can feel it in the backs of my legs – I’m 5’10”. You can feel the lumpiness low down. It’s not adventure bike so it’s not the bike for you but if you’re riding a mixture of different stuff then it’s a good compromise.”

As the rider, I had plenty of space and wasn’t cramped or pushed up against the seat. The weight distribution was fine even on the standard suspension setting. Of course the Ohlins are full adjustable so if carrying a passenger was your regular thing then you might want to play around with the settings.

The seat cowl is easy to remove; a turn of the key pings the seat off and the mini tool kit will reveal an Allen key to whip off two bolts and hey presto. Only thing is, if you’re out and need to whip it off then where do you put it?

Is the Ducati Supersport good for commuting? 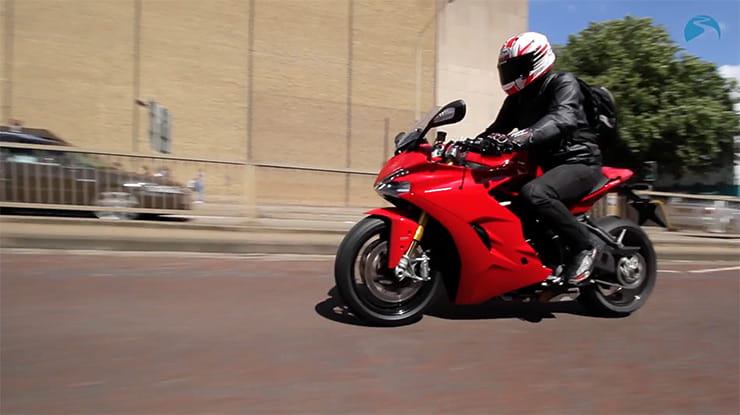 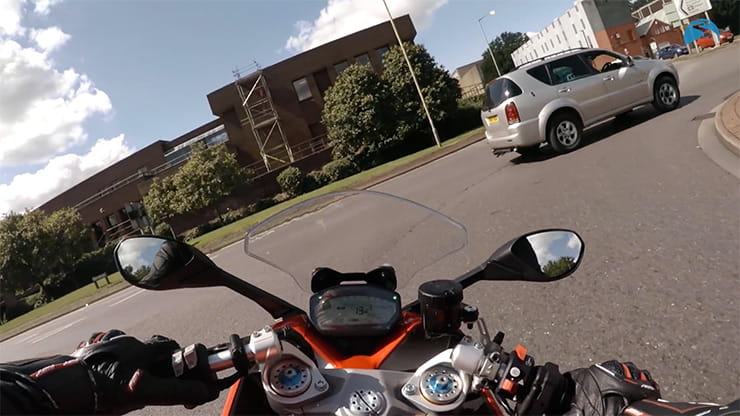 Excelling in the commuting world and providing everyday versatility is a must for many if there’s space for just one bike in your garage, whether it’s a daily run or not. The slimline silhouette of the Ducati allows it to slip through traffic with ease and of course, being a burbly twin, the traffic will have already parted allowing for simple access on your journey.

The bike is compliant, comfortable and manageable both in traffic and on the open roads for the everyday office trip or the weekend blast. A light clutch and torquey motor mean little throttle action is required for the slow speed filtering but give it a blip from the responsive ride-by-wire throttle and the SSS is prepped and ready. There’s no instant hit like there is from the similar-engined Hypermotard, for example, but even that can get weary. It’s a little lumpy low-down true to the characteristics of a twin and even so there’s no need for high revs in town, the motor needs a little encouragement to really perform.

A bit of touring, perhaps? Well, this is no sports-tourer but there are semi-rigid and expandable (and waterproof) panniers available for £960 despite the lack of protection and cruise control, two crucial pieces of the touring jigsaw. 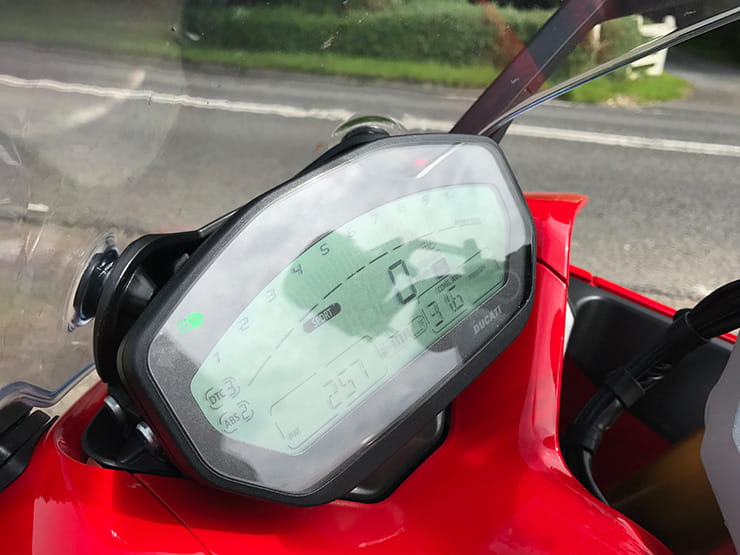 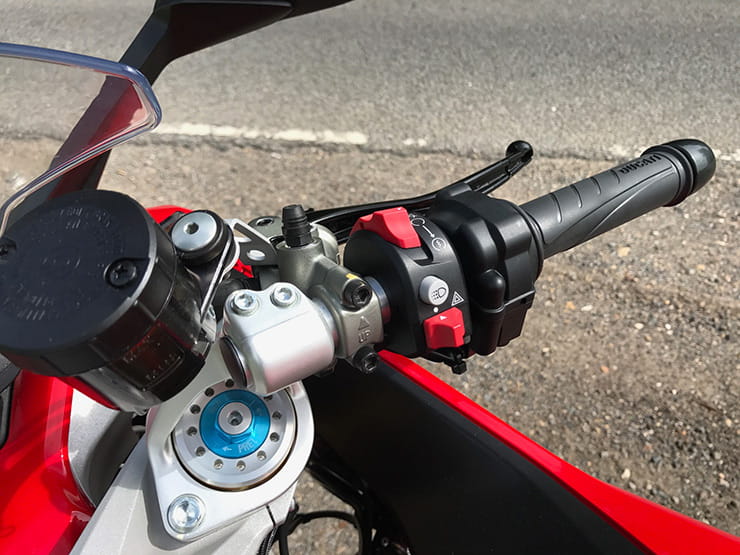 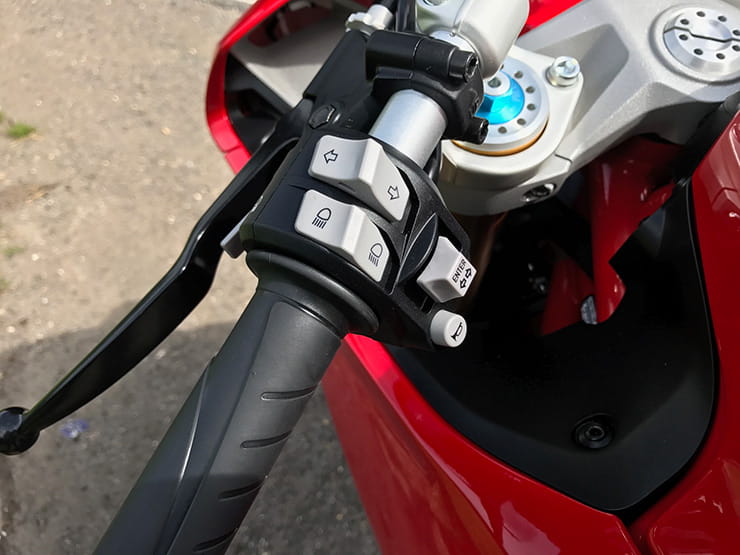 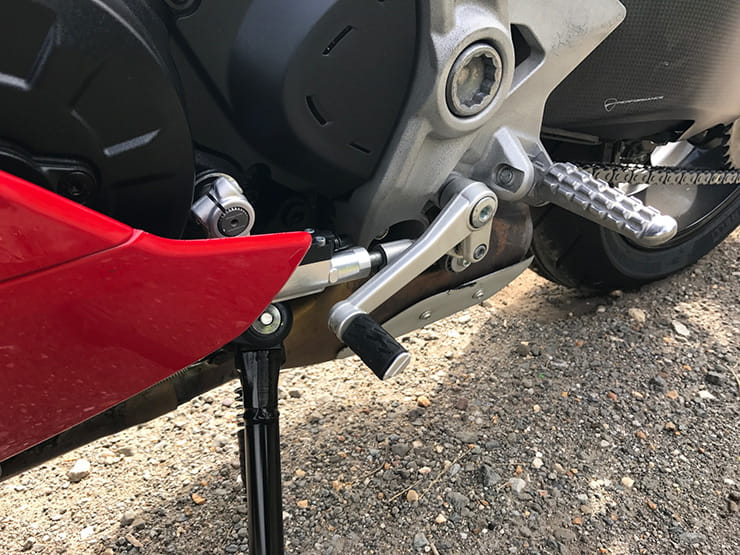 The SS ‘S’ is a lush combination of looks from its Panigale-inspired fairings, performance from the awesome chassis/suspension/tyre/brakes combination and comfort with a terrific seat and semi-sports riding position. It offers real value as a multi-faceted motorcycle, fit for almost every purpose which is easy to ride too

The mirrors are pretty vibey and the narrow fairing doesn’t offer any kind of lower leg protection, particularly noticeable when it rains. The two-position screen is fairly inadequate too, but those quibbles aside, the impeccable Ducati styling makes it a super sexy machine with the high-end mod cons to match; Pirelli Diablo Rosso III, fully adjustable front and rear ohlins, quickshifter with autoblipper and Brembo brakes.

Service intervals are every 9000-miles for an oil change and general check and 18,000-miles for valve clearances, or every year, whichever comes first.

Competition is harder to put a finger on because of the Ducati’s flexibility as a sportsbike that does everything – some would argue that the VFR800 from Honda, Kawasaki’s Z1000SX and Suzuki’s GSX-S1000F would be the main players but I believe the Ducati stands alone.

So, if you're looking for a bike that is competent in most areas then this is the one for you. The more miles I covered the more I enjoyed it and I’m definitely a sucker for a burbly twin with some high-class refinement smattered all over it and the SuperSport S has something about it that keeps me wanting to ride. If one bike is enough for your lifestyle, budget, available space then give the Ducati some serious consideration.

With thanks to Vindis Peterborough, MSV Trackdays and Cadwell Park 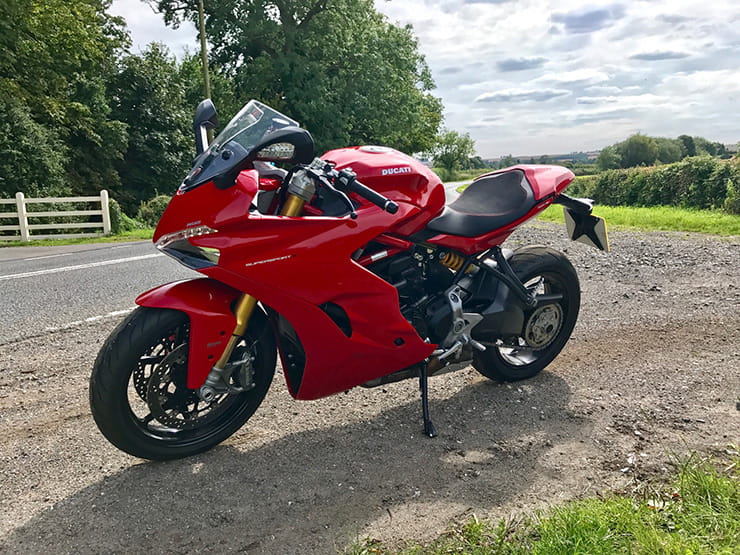 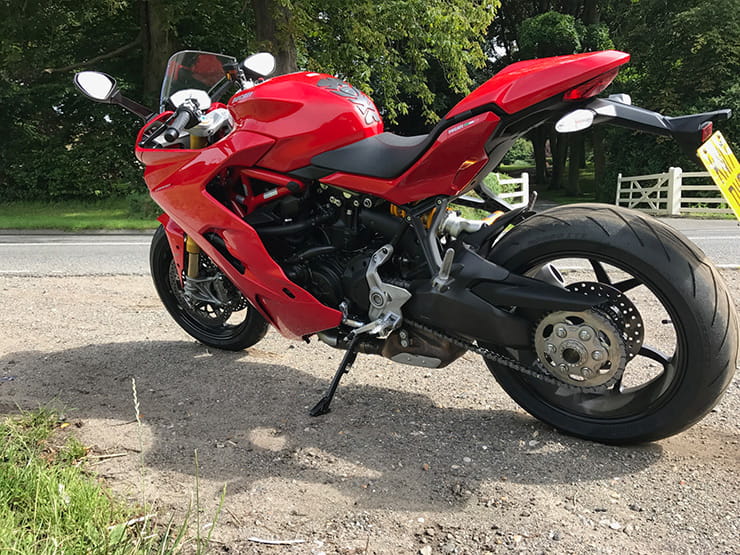 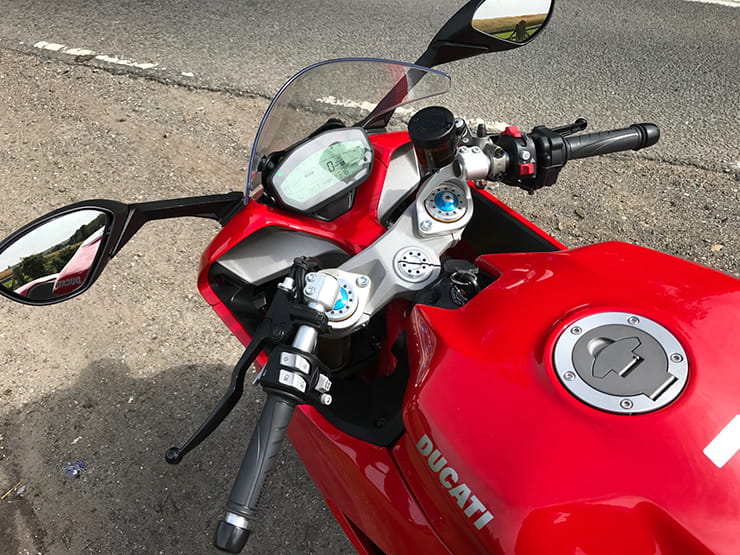