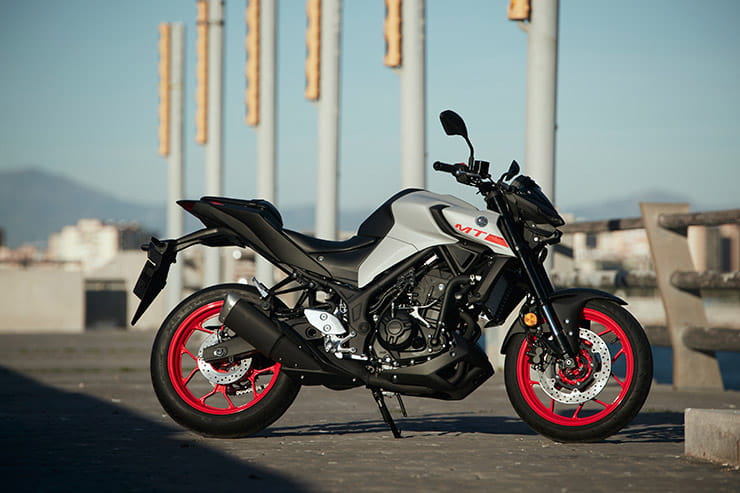 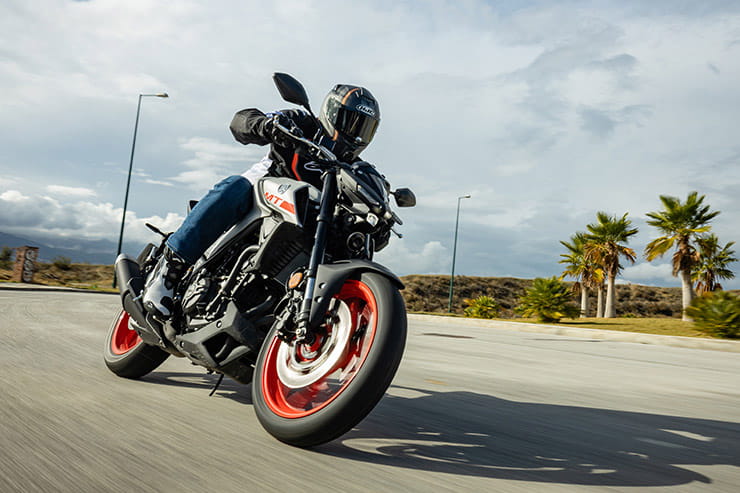 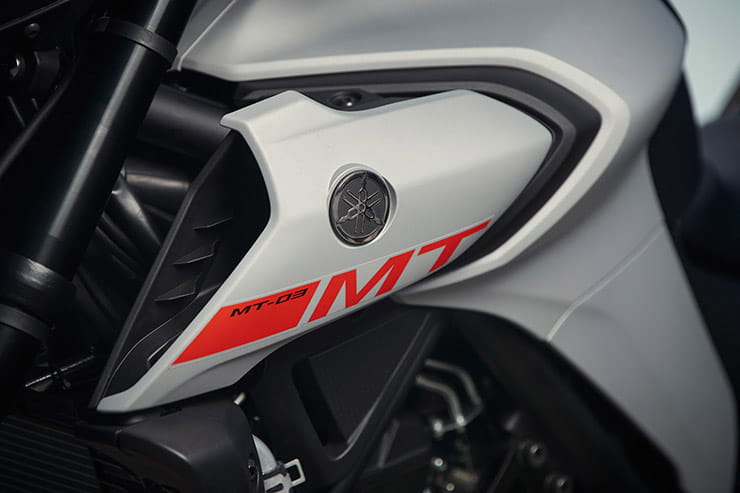 Launched alongside their revamped L-plate MT-125, Yamaha’s naked Dark Side family resemblance is also strong with its larger, slightly less revamped A2-licence MT-03 sibling. This is a second-generation tweak of the original 2016 bike, and it’s slightly less than an overhaul: a styling refresh, uprated suspension, a more compact, aggressive riding position, LED lights including twin ‘sidelights’ above the central headlight, and a new dash. Engine, frame, weight, tank capacity, seat height and steering geometry – the important bits – all remain as per the 2016 bike.

But Yamaha admit the MT-03’s target audience of 20 to 30 year-olds might be small, they say it’s growing (especially in Turkey, for some reason). And it’s a tricky demographic to cater for; guys and gals old enough to step out on their own, but completely skint – which means the MT-03 needs to be a) cool and big bike-sized, but b) affordable alongside student debt, rent and bar bills.

Bennetts BikeSocial contributor and wannabe 20-something Simon Hargreaves re-visits his youth at the launch in Malaga, Spain. 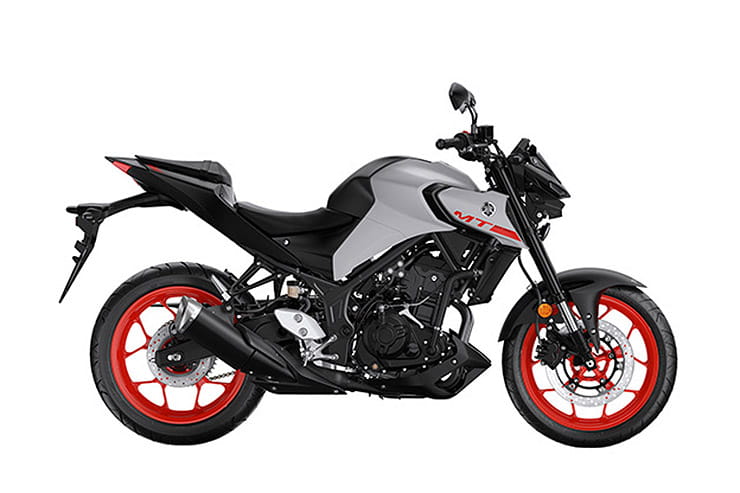 The MT-03 lands in dealers at a mid-pack £5198 (OTR), exactly the same as Kawasaki’s Z400, and it’ll be in be in dealers at the start of the new year. The colour options are Icon blue (blue/black), Midnight black (black) or Ice Fluo (grey/red) and they all cost the same.

Here’s how Yamaha’s MT-03 compares with its A2 rivals, in OTR price order: 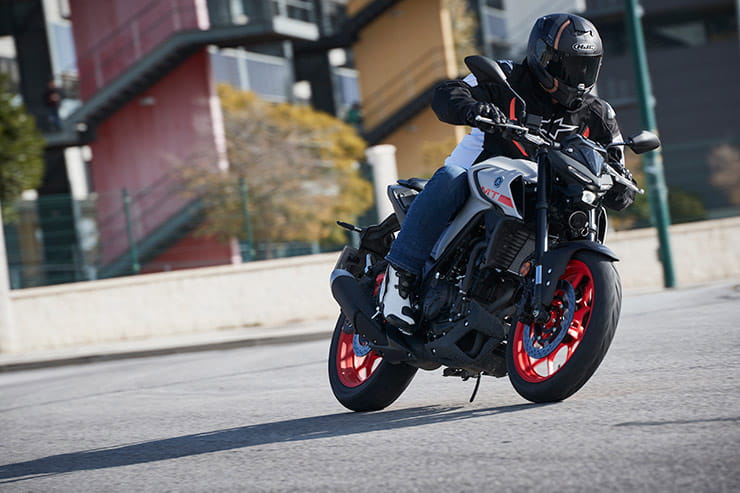 And if you’re into statistics, the Yamaha’s power/cc ratio puts it top of the class and in a comparatively high state of tune, making 0.13bhp/cc. You could mention that in the pub to your CBR500F-owning mate, but don’t expect it to count for much on the road. Because 41bhp isn’t 47bhp, and the Yamaha is giving away performance in a class that really should be eking every last drop from its artificial cap. If I was a bike-buying 25 year-old with an A2 licence, I’d be looking at the specs and selling a kidney to buy the bike with the most power – and in the current line-up, that’s the pricier parallel twin CBR500F. With a 6bhp and 10 lbft advantage, it’s faster and fitter than the Yamaha on engine spec. So is the Yamaha’s nearest rival, Kawasaki’s Z400. 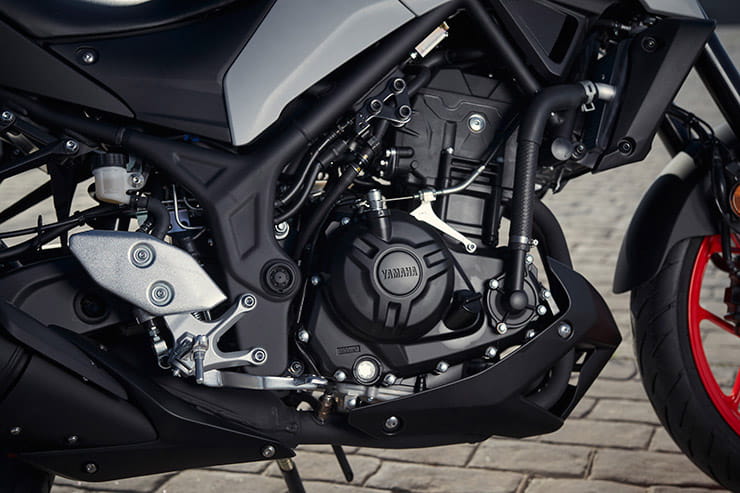 But the MT can only work with the tool it’s given – or seeing as it’s the same motor as the previous MT-03, the tool it was given in 2016 – and, on that basis, the 321cc DOHC four-valve 180° parallel twin is still handy enough to punt the MT along at a traffic-beating pace. It can deal with motorways – 70mph is smoothly vibe-free and painless – and there’s more to come, just, if you need it. Top speed is around 100mph.

But it’s the urban and rural settings – places where speed is relative and where weight, agility and nippiness count – that the MT-03 is most at home. In-town acceleration is handy and traffic light GPs are excellent fun because there’s enough vim in the motor to make a clean getaway, but not enough to make the situation irrelevant. And twisty back roads are where the MT-03’s performance really clicks – same as any engine; all you need to do is find the right tarmac to fit it. With that in mind, what the prospective MT buyer really needs to do is acquaint themselves with hunting out the best B- and unclassified roads – stick to riding away from trunk roads and you’ll be just as rewarded as (and maybe quicker than) riding an MT-10.

The wee parallel twin clearly needs a good revving to get it to fly, but it doesn’t feel peaky, despite the stratospheric redline. In part, it’s because the motor is fairly flexible – it’ll pull, ish, from below 5000rpm – and even with lots of cog-swapping, the gearbox is neat and tidy. But the lack of peakiness is also because the single is deceptively civilized; it never feels like you’re causing the MT-03 anguish, even when its neck is being well and truly wrung. Which, with 41bhp, is much of the time. It seems a bit odd that the smaller MT-125 takes technical bragging rights with its variable valve timed motor – but overall the MT-03 is a well-balanced, quiet, cheerful and versatile engine. Just needs a few more cubes. 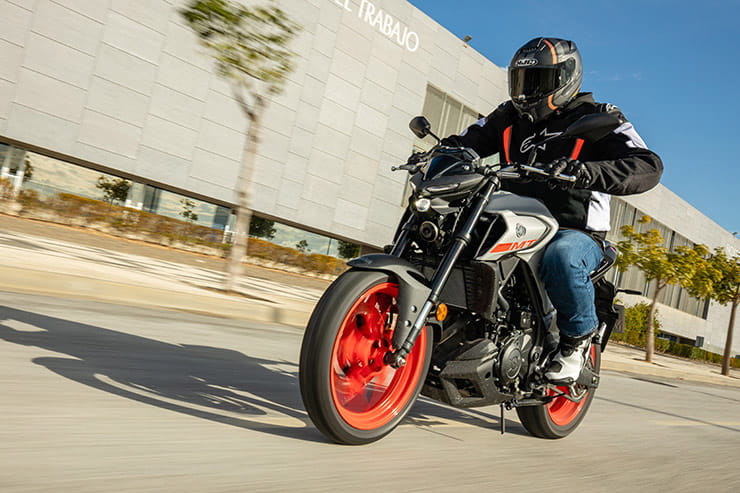 The MT-03 keeps the same tube steel frame as the previous bike, and the same asymmetric swingarm. Wheelbase, rake, trail and weight all remain as before; at a flyweight 168kg fully fuelled, the MT-03 is highly manoeuvrable. A mere casual thought is enough to get it turning, darting around cars with a hilarious frivolity. It’s stable too – at higher speeds, the MT-03 tracks corners without any of the tentative fluttery, skittering feel of some smaller bikes. The new KYB usd forks – at 37mm, they’re a smaller diameter than the previous bike’s 41mm rwu forks, and smaller than the MT-125’s 41mm usd-ers too! – and revised damping and stiffer spring in the KYB rear shock deliver a measured ride quality; the MT-03 isn’t as plush as Honda’s CBR500F, but it’s a million miles away from something like BMW’s biro-sprung G310R. 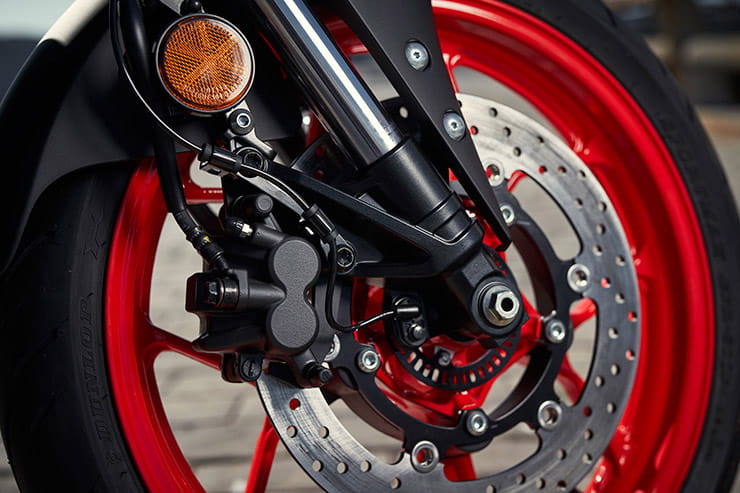 The brakes are where the MT-03 starts to show its significance to the world – while the MT-125 and YZF-R125 both come with a single 292mm disc and radial four-pots, the bigger bike gets a bigger disc – 298mm – but grips it with half the number of pistons; it makes do with a two-pot sliding caliper. This is a mostly a style thing at the MT-03’s level of performance; there’s plenty of controllable stopping performance and the bike certainly doesn’t feel over- or under-braked. But Yamaha admit themselves the MT-03’s target customer looks for a “cool image”, so you’d think radial four-pots and twin discs would be a given. 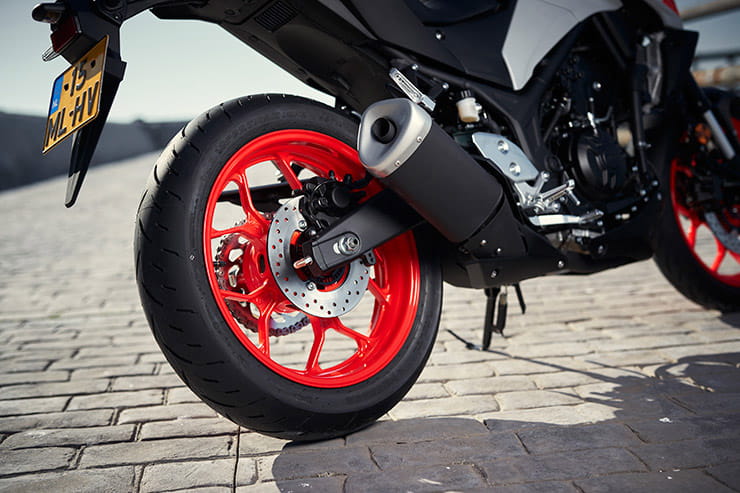 Another area the MT-03 shows its cut corners is with stock rubber. The MT-125 comes on Michelin Pilot Streets, made en France; the MT-03 is on Thai Dunlop Sportmax GPR300s (a 110/70 17 and 140/70 17). The difference is quite something; the 125 has the grip and confidence to cope with – well – you could comfortably throw the 03’s 41bhp at them, while the MT-03’s Dunlops are instantly less sticky; you can feel them micro-sliding and skittering on turn-in. It’s becoming a common refrain to complain about Thai Dunlops – they’re fitted to numerous small-to-mid capacity Japanese bikes, and it’s not doing Dunlop or the bike manufacturers any favours at all by painting both in a casual, slap-dash, cost-cutting-at-any-cost light. If your formative experience of a brand is negative, what are the chances of giving them another go at a later point in your biking career? Besides, manufacturers should be fitting the very best tyres they can to this sort of machine because it’s exactly these riders who need confidence the most. 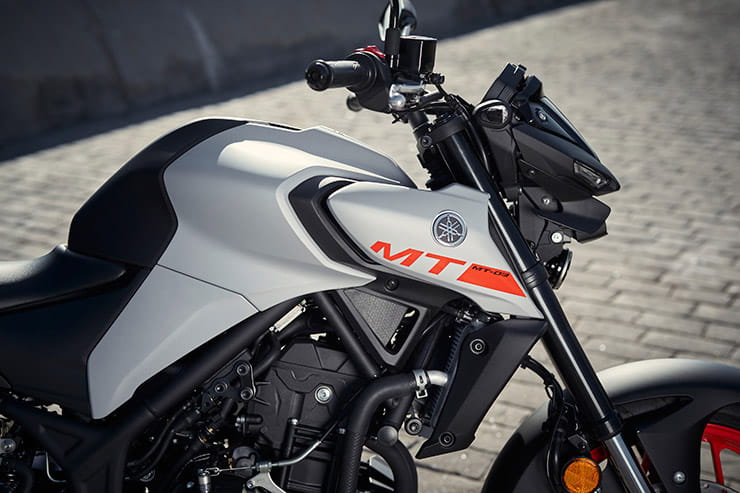 The MT-03 retains the same 14 litre capacity as last year’s model, despite a reshape to give a flatter top profile, slimmer at the knees, a wider flare at the front and a shorter reach to the bars (I suspect, under the plastic, it’s actually the same tank with different panels bolted on). During a hectic ride the MT-03 was showing around four litres per 100km (or 70mpg in Brexits), which is a theoretical 200 miles from the tank; experience from the previous MT-03 suggests the maths is wrong somewhere because with the same engine and tank size, the fuel gauge was nudging empty after just over 160 miles.

Out go the old MT-03’s clocks – the last MT with an analogue-style tacho needle – and in comes a fairly MT-10-style LCD rectangle. It’s clear, concise, contains all the usual, relevant information, and about which there’s not much more to be said. 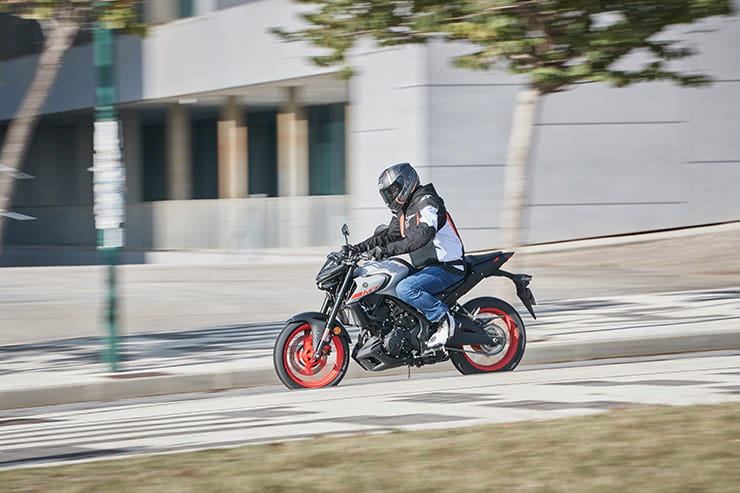 This is the key to the 2020 MT-03’s revamp; sharpening up the 03’s image by pulling it closer to other MTs – more aggressive styling, more compact riding position, more weight over the front end. The tank is tapered at its waist, slimmer between the knees, flared at the front and with a lower profile. Side tank ‘duct’ panels reach forward with pointy, angular intent.

The MT-03’s riding position alters from the previous model, with the bars lifted by 39mm and brought 19mm closer to the rider. Seat height and footpegs remain unchanged, but it’s enough to give the MT a more sat, braced, aggressive feel.

The restyle is completed with a new ‘face’: the headlight switches to a single LED with a pair of LED sidelights. At the back, the 2020 MT-03’s seat and tail unit are the same as last year’s bike. 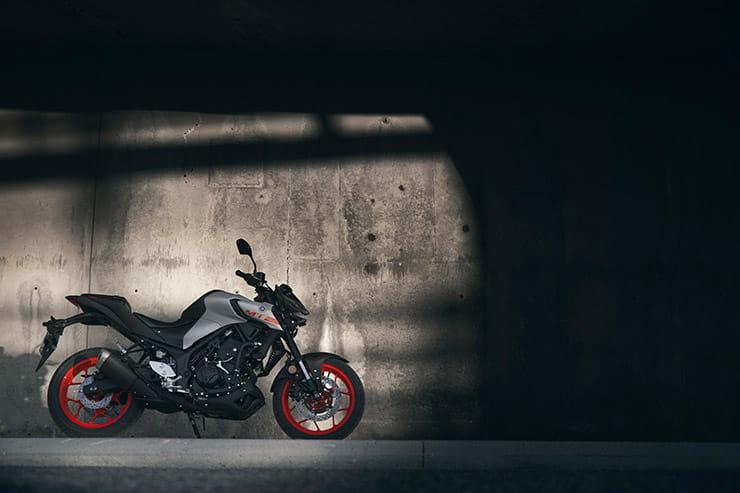 There’s nothing wrong with Yamaha’s 2020 MT-03 (apart from its tyres) and plenty right. The motor is a manageable, vice-free unit – at 321cc it’s got plenty go in it and although it’s in a relatively high state of tune, it never feels stressed or peaky. Handling is sharp, agility is excellent and ride quality about right. Build quality isn’t outstanding but no worse than any of its rivals (with the possible exception of the CBR500F). Looks-wise, it’s on par with Kawasaki’s Z400 – as it is on price.

My worry for Yamaha is they’re missing a trick with the MT-03’s performance. There must be another reason I’m unaware of for not giving the MT the poke it could have, yet still be A2 compliant. The same machine with 47bhp instead of 41 – or, more importantly, a bigger motor making 32 lbft of torque instead of 22 – would be a whole lot more fun. But then maybe then it’d need better brakes and suspension, and cost a whole lot more.

• agility – for its power and chassis, the MT-03 is a demon in traffic

• looks – the grey/red version, for me, issa nice

• tyres – the bike deserves so much better than Dunlop Sportmax GPR300s

• performance – for what it is, it’s great. For what it could be, not so much