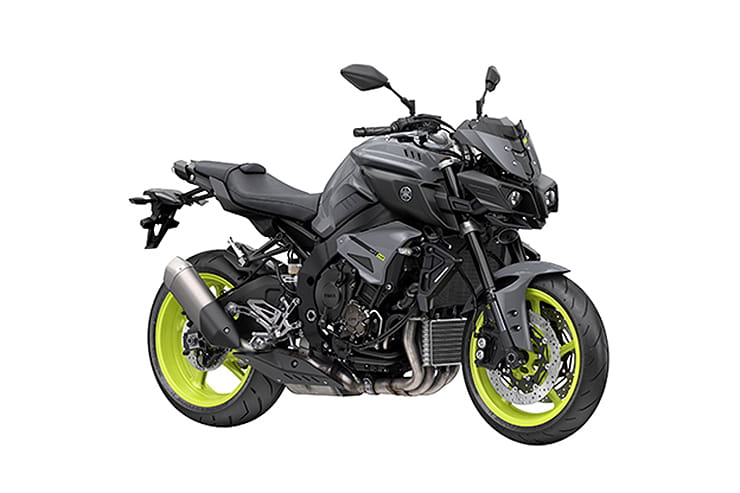 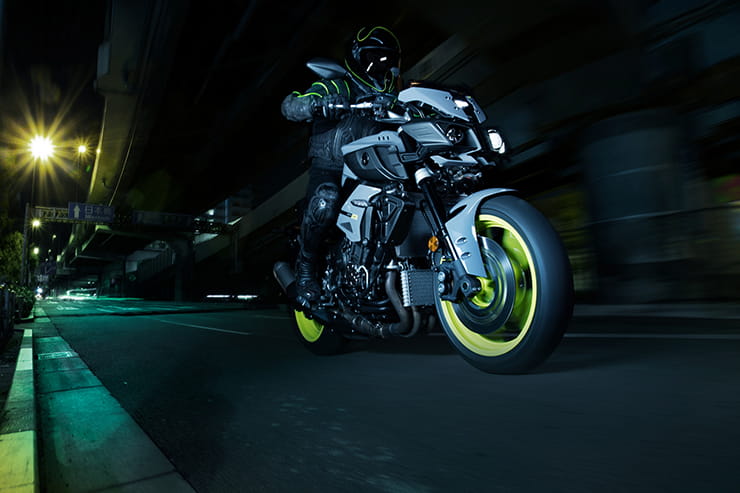 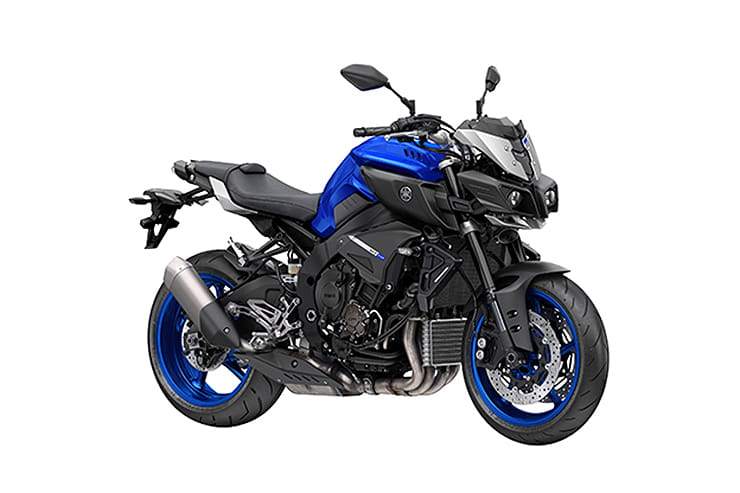 Many people see the MT-10’s headline features such as its R1-derived engine and chassis, claimed 158bhp power and aggressive styling and assume that it is a full-on super naked that is only for the most dedicated of riders. However dig a bit deeper and you will discover that this is far from the case. Yes, the MT-10 is more than capable of going bonkers when provoked, however beneath its wild exterior lurks a remarkably practical machine. No, seriously, it does!

A major reason for the MT’s unique look is the fact Yamaha purposely designed it to be an all-rounder. Where before they had both the FZ1 and FZ1 Fazer models running in parallel, with the MT-10 they attempted to combine these two strings into one bike, a goal they certainly succeeded in achieving. On the go the MT’s small front fairing is remarkably effective (you can add a screen to make it even more so) and its seat is comfortable and riding position upright and relaxed. It is an all-day machine that is only really limited in its comfort when you up the pace to above motorway speeds. And the engine is also suited to this lifestyle.

The CP4 crossplane inline four is a beauty. Noticeably different in character to the R1’s engine and less frantic (it lacks titanium valves and is re-tuned for more low-end and mid-range grunt) it still has that delightful off-beat sound and feel that you get with the crossplane not to mention its smoothness on a constant throttle. There are little vibes and bags of grunt as soon as you touch the throttle. While at low speed some riders think it is a touch too eager on the gas (see the what to look for section below), others love the MT’s spirit and fiery nature and when you go looking for a bit of a thrill, it certainly delivers…

While docile when asked, the MT is still packing a proper R1-derived engine and chassis and that means it is more than happy to get down and party. Kneedown is perfectly doable, as are huge wheelies, and there is no way that this naked will ever get left behind on a rideout alongside sportsbikes thanks to its massive power, balanced chassis and electronic assists such as traction control, cruise control and ABS, although it is lacking the angle-sensitivity some rivals nakeds boast. 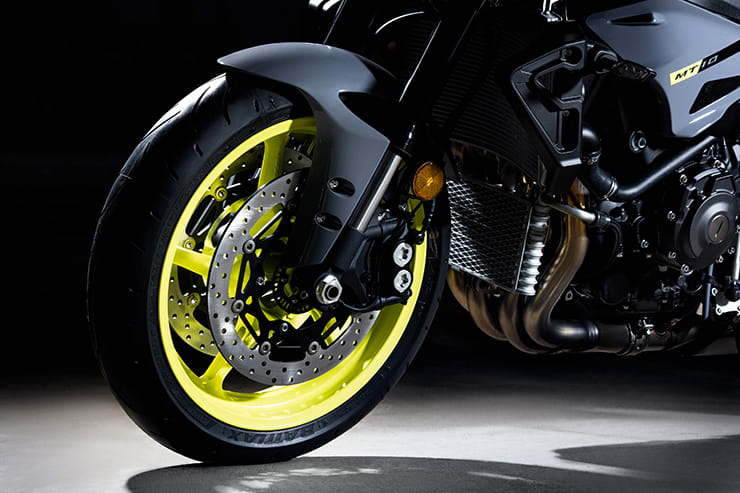 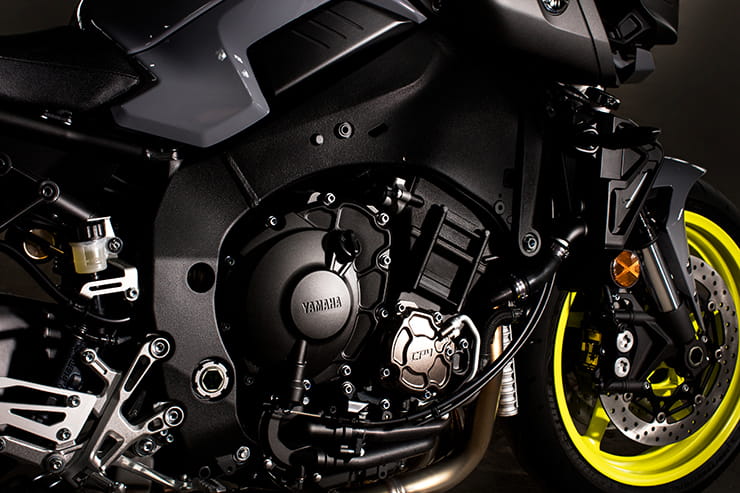 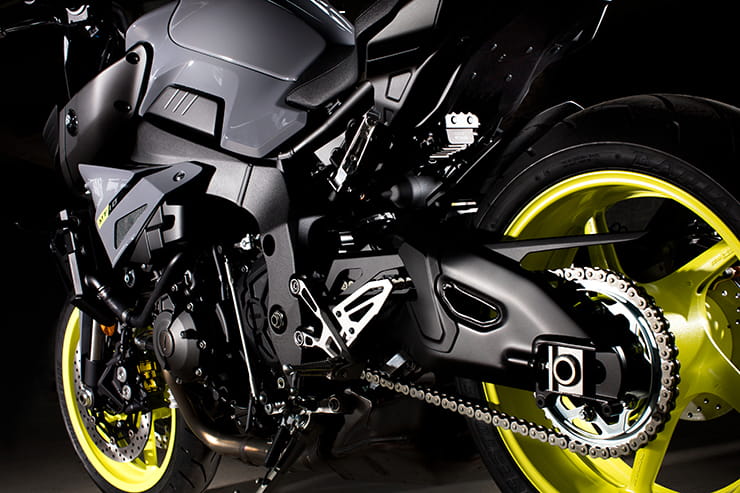 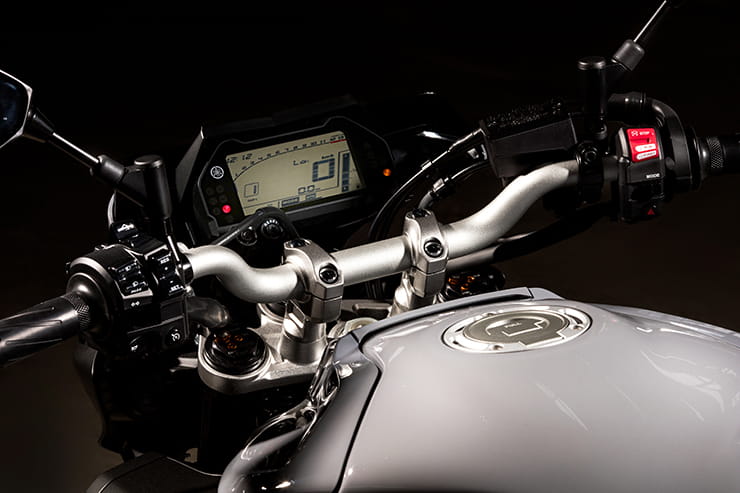 There are no major mechanical issues to worry about when buying a used MT-10, however a quick glance at the forums soon reveals that longterm ownership brings with it a few irritations that you need to be aware of if you are considering buying one. Some can be fixed through modifications, some can’t…

Starting with something that sadly can’t be cured, the MT-10 is a thirsty old beast and drinks fuel at quite a rate of knots. Yamaha claim it will deliver 35mpg, but owners reckon that even at a gentle pace this figure is far closer to 30mpg and sometimes even below. The 17-litre tank should be good for in the region of 140 miles in theory, but the fuel warning light generally goes on at close to the 90-mile mark, which is a serious frustration on a bike that is so good at touring. Some owners report that reflashing the ECU to sort out the bike’s throttle response (more on this later) actually makes it even worse with low 20s mpg figures in town. Back onto the forums and a few riders have swapped the MT’s gearing from its 43-tooth rear to one with less teeth (the R1 has a 41-tooth rear, which fits) and this seems to improve fuel economy on long motorway stints, however it does take some of the zing out of the bike’s acceleration. Another forum tip is to extend its wheelbase (on the adjusters) and add an extra link into the chain to stop it being quite so wheelie-prone!

A major source of keyboard bashing is the MT-10’s fuelling, which is very abrupt and aggressive as standard. You can fit an aftermarket fuelling module, however to really get to the source of the issues an ECU remap is the best route. The O2 closed loop sensors and Lambda sensors need to be removed and blanked off (and the ECU told to ignore them so a fault code doesn’t show up) and the ECU remapped with the fuelling and ignition maps tweaked. There is a bone of contention when it comes to the secondary air recirculation system with some dyno houses insisting it should be blanked off and others saying as long as it is disabled during the run you are ok to leave it fitted. These mods done and the MT is transformed into a far more refined machine that is easier to ride at slow speed as it is less aggressive on the throttle. Also, as an added bonus, an ECU remap can actually also add in a downshifter function (you will need to buy a new switch for the gearlever as the Yamaha quickshifter is only one directional) and can also reduce the temperature the fan kicks in at to stop the MT running so hot in town. A lot of MT owners suffer cooked feet and sweaty man-bits in hot weather…

Owners are in general fairly happy with the MT-10’s chassis, however its brakes do come in for some stick. Yamaha’s OE pads aren’t the most responsive and swapping them for a set of higher friction aftermarket items is thoroughly recommended by most owners.

Other than the above, you only need to really worry about service intervals and poorly fitted extras such as tail tidies or heated grips. The MT-10 hasn’t faced any recalls, but it does need its valve clearances checked at 24,000 miles, however it is very unlikely any used bike will be nearing this mark. 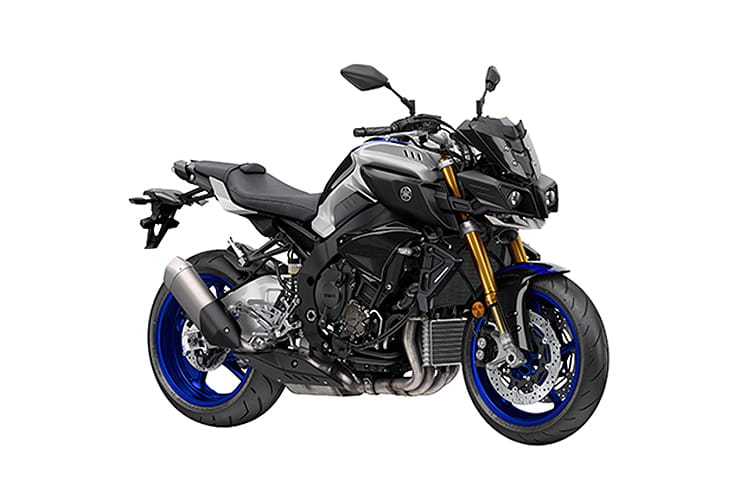 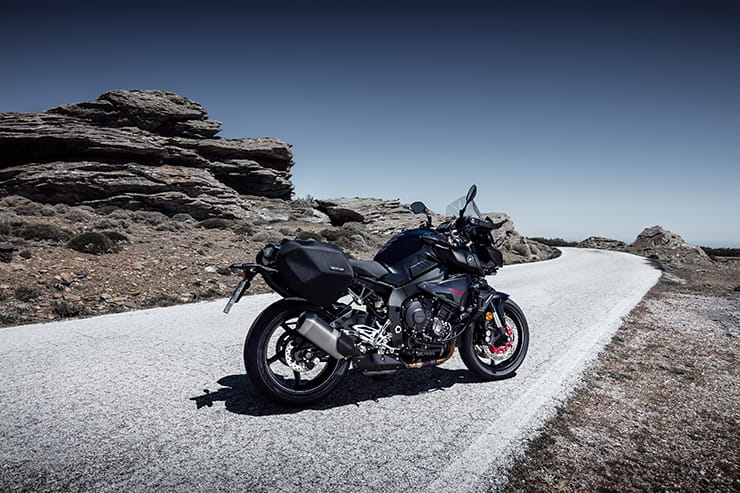 The MT-10 hasn’t been updated aside from a quickshifter as standard fitment from 2017-owards, however it has been sold in a few different guises in the UK. A year after the launch of the stock bike the MT-10 SP arrived with Öhlins semi-active suspension from the R1, a TFT dash, quickshifter and updated switchgear. In the same year Yamaha launched the MT-10 Tourer Edition, which is basically a stock MT-10 with a few Yamaha bolt-on accessories added by the dealer. The Tourer gains a comfort seat, taller screen, hand guards, GPS bracket and soft panniers at a £650 boost in RRP. 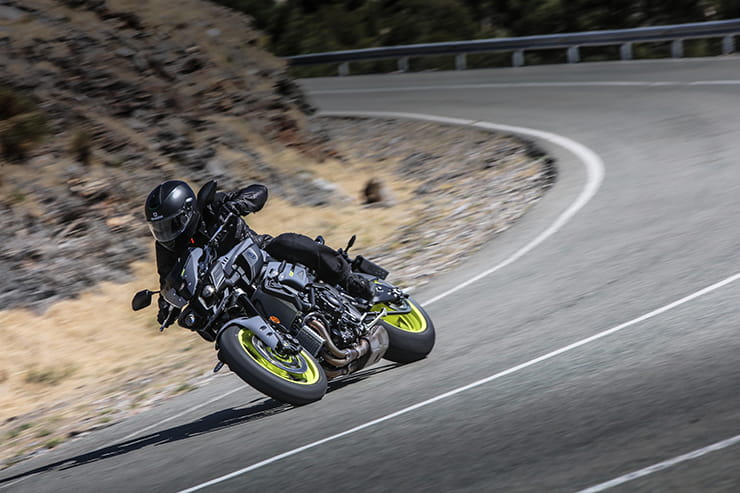 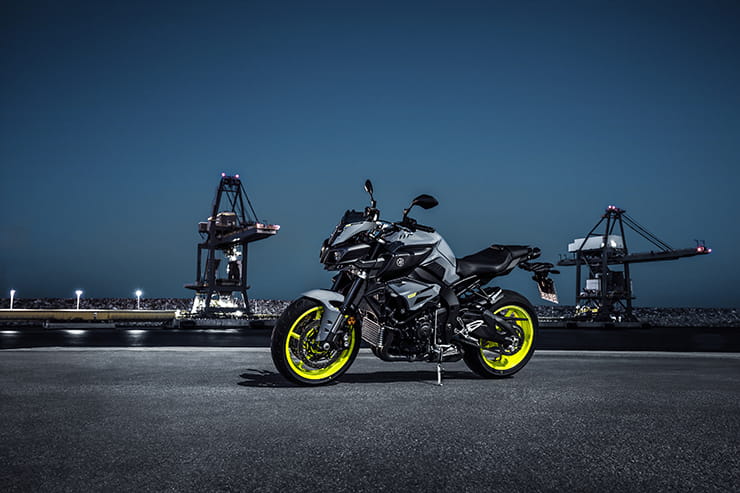 There are loads of MT-10 forums and Facebook pages out there, so take your pick from the MT-10 UK Owners Club Forum (www.mt10ukoc-forum.boards.net) or the American-based FZ10 (that’s what they call it over the pond) page (www.https://fz10.org) or the Yamaha FZ-10 Forum (www.fz-10forum.com), which claims to be the biggest of its kind on the net.

What do owners think?

Chris Woodrow is a Bennetts Rewards member and owns a Yamaha MT-10SP. We asked him what he thought of it…

“I bought it to replace an MT-07, which I’d had for six years as I wanted a larger capacity bike; something with a bit more go. I’ll be using it to commute to work at times, but it’s mainly for weekend blasts on my own or with friends.

“All I’ve changed is to add some crash bobbins and a radiator protector, but I do wish it had a larger fuel tank – it’s a bit thirsty for longer runs. Oh, and the fuel gauge isn’t accurate so it’s best to reset the trip after each fill-up to be sure.

“I can barely get my wallet under the seat, there’s so little space, but I love the sheer power and acceleration; it can’t help but make you smile.

“The Öhlins suspension on this SP model brings a very solid and reactive riding experience that really inspires confidence. I also really appreciate the road presence – I’m not sure if it’s the bright headlights or the exhaust note but since riding it, I have noticed more drivers pulling to the side to let me filter or overtake; it’s almost like Moses parting the Red Sea.”