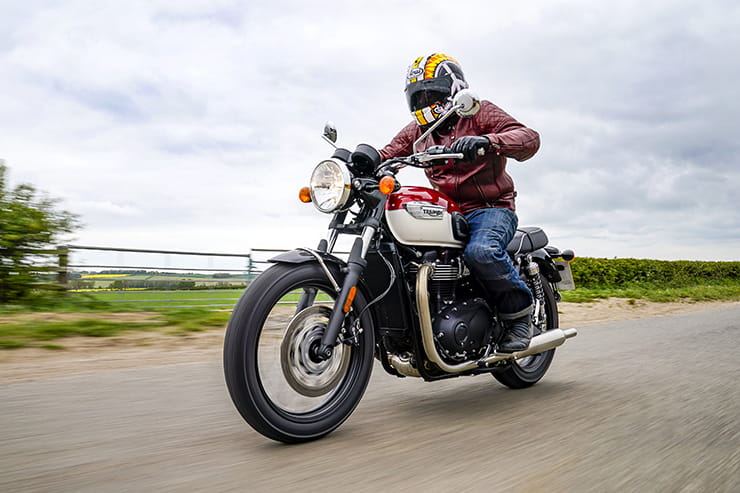 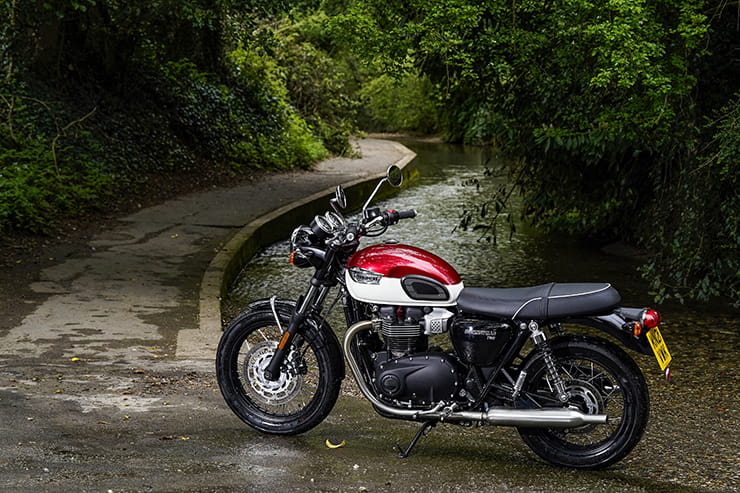 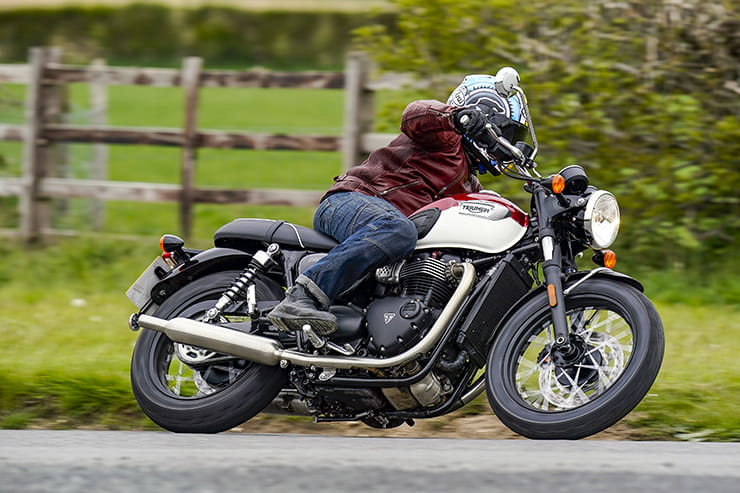 Is there a more iconic or recognisable name than Triumph’s Bonneville? The very first production Bonneville T120, so-called because of its potential 120mph top speed, was launched back in 1959, and was a huge success for Triumph, creating an explosion in sales in the US. From movie stars to café racers in the UK pushing the 100mph limit on public roads, everyone loved the Bonnie. It spawned Triumph’s image and, later, the platform gave them success at the Isle of Man TT. Malcolm Uphill recorded the first 100mph production bike average lap on a Bonneville Thruxton in 1969. Even Evil Knievel’s first televised jump was on a Bonneville - it which was the superbike of its time and was loved by many.

Fast forward to 2021 and the name lives on. For the current model year Triumph essentially offers two models: the Bonneville T120 (£10,800), which is powered by a 1200cc parallel twin and has also seen an update for 2021, plus the bike we have on test here - the ‘entry-level’ T100, a 900cc parallel twin with a slightly lower spec than the T120 and therefore a slightly lower price tag.

We spent a few days enjoying British summer on the all-new T100 Bonneville. So, it’s time to take it steady and step back in time. 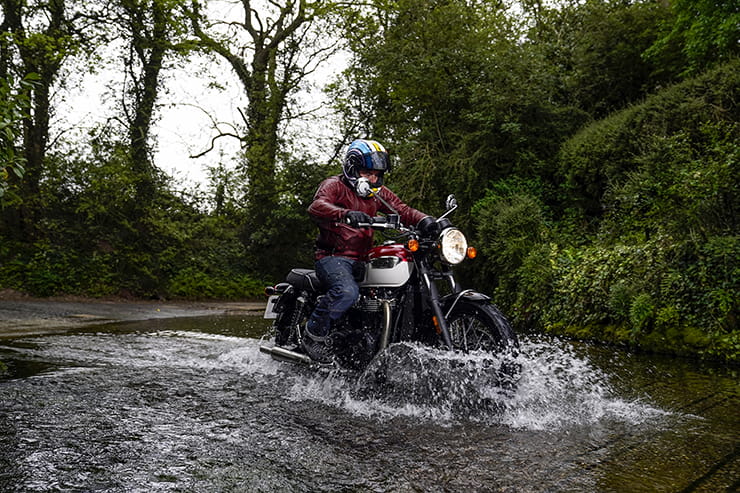 Just over £9000 for the box-fresh T100 is £1700 under the top-spec T120, which has more power thanks to its 1200cc capacity compared to the 900cc twin on the T100. The T100 is priced slightly higher than the competition but still a decent saving over its big brother. The only problem with that price point is that it may not be truly representative as I doubt many bikes will leave the showroom standard. There’s a plethora of factory accessories, 117 to be precise, with which to personalise your T100, meaning you can easily pass the £10,000 mark before starting it up for the first time, and that is without dipping into Triumph’s cool-looking clothing range.

Looking at similar ‘entry-level’ retro machines that can also be restricted to A2, there is a varied choice. Kawasaki's attractive W800, which rides well, has a lovely finish and is priced at £8399.

Moto Guzzi has their new for 2021 air-cooled V7 at £8699, and you could argue Ducati’s Scrambler (£8485) is an indirect competitor to the Triumph. But for me, the biggest competition to the T100 is Royal Enfield’s hugely popular Interceptor, which at only £5699 is a bit of a bargain. 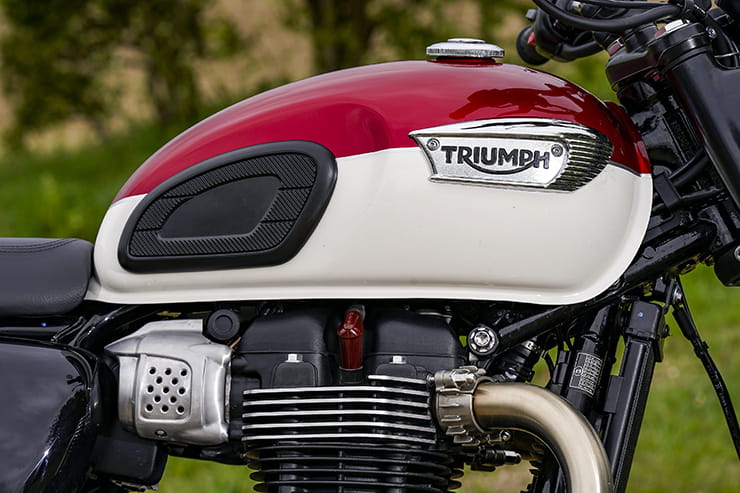 An 18% increase in peak power is a significant jump for the T100. On the face of it, it appears Triumph has simply added the engine from the Street Twin, which was introduced in 2019, rather than re-inventing the wheel. Still, there is a 10PS/9.9bhp increase now creating 65PS/64bhp at 7400rpm which is higher in the rev range than previously from 5900rpm to 7400rpm. The new motor revs an extra 500rpm higher too.

As you’d expect, the parallel-twin conforms to tight Euro-5 regulations while service intervals are every 10,000miles reducing the cost of ownership. An A2 kit is still available for the T100 which can easily be added or removed. 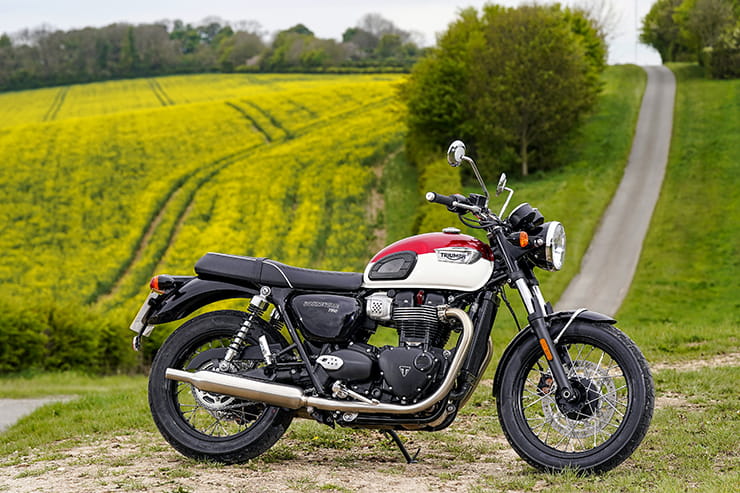 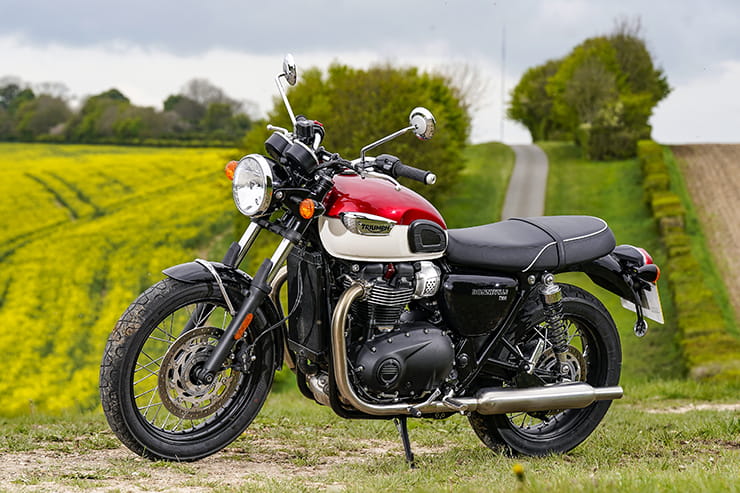 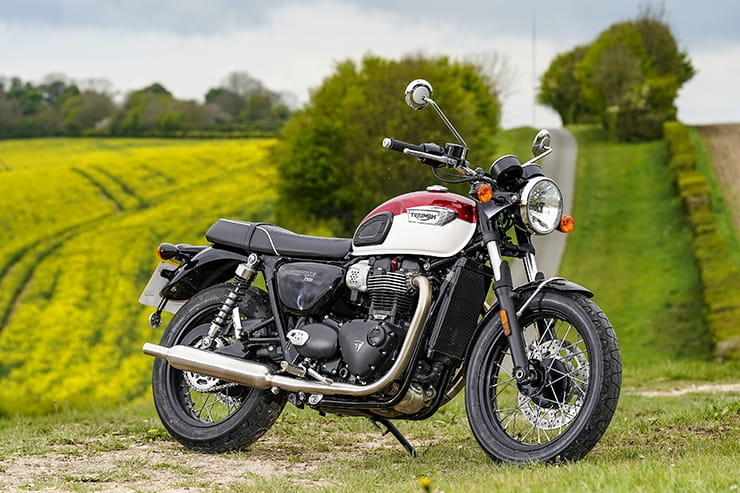 The parallel twin has a nice burble to it, but Triumph’s engineers have had their hands tied by Euro-5 restrictions. It’s certainly sounds better when you’re not on the bike if you know what I mean, but I’d still like a bit more engine noise to match the charm and appearance of the bike.

The good news is that the boost in engine performance is instantly noticeable. Outright power isn’t a priority in this class of elegant retro machines, but it is welcome. That extra kick gives the T100 more zip and makes the ride livelier. It also makes the new ‘Bonnie’ more enjoyable in the sense that you no longer feel like you are riding an entry level bike – especially as the old Bonnie felt a little short-changed when it came to performance.

With quoted peak torque remaining the same but now arriving slightly later, you do have to rev the T100 a little harder to make the most of its new oomph. But the new motor out-grunts the old from 3500rpm, with 80% of its torque available from as little as 2000rpm. It will still happily chug along and pull from the bottom of the rev range without troubling the five-speed gearbox, but now, if you should rev it harder, 100mph is easily achievable and even 110mph plus a little more, which wasn’t the case on the old bike.

OK, not everyone who buys a T100 will be interested in top speed. But that extra power comes in handy for quick overtakes, especially when you decide to overtake two or three cars instead of just one. And it’s invaluable when you add a pillion, which the T100 now accommodates with ease. 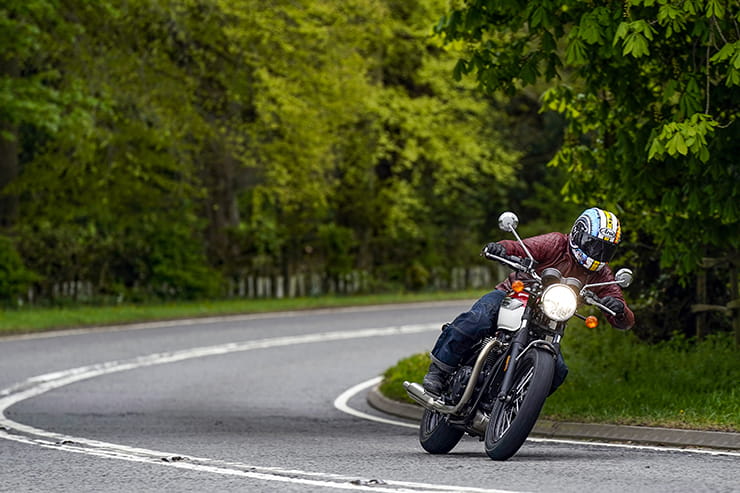 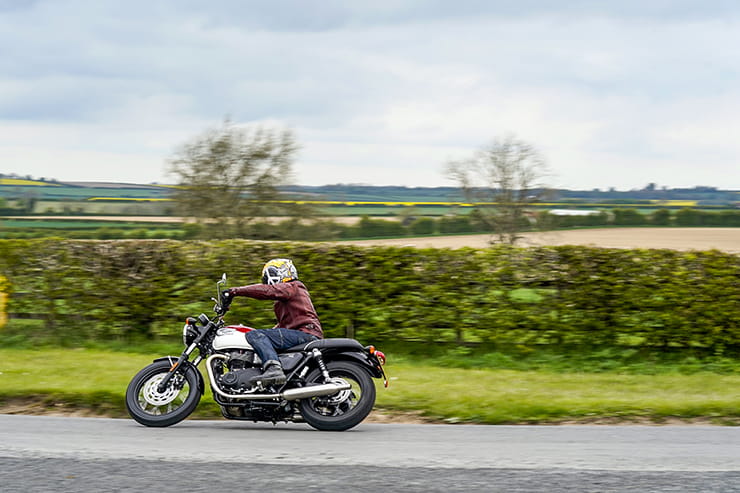 For 2021 Triumph have dropped the T100’s weight by 4kg, and most of that saving has come via the new engine. The new Euro-5 exhaust has actually added weight and I have to applaud Triumph for doing its best to hide the ugly catalytic converter under the bike, as with many modern machines from their range. Despite the engineering challenges, the exhaust has a lovely straight-through flowing look to it.

There is no hiding the fact that at 228kg, the T100 is still a heavy bike, on paper at least. Triumph has revised the suspension settings and added new higher-spec forks for 2021. And there is a nice balance to the T100 which, combined with lovely smooth fuelling, makes it a doddle at low speeds – so you don’t really notice the weight.

Flowing through the British countryside is what it’s all about - stability is excellent, and comfortable ergonomics make it a doddle to ride at a relatively brisk pace. The forks and twin shocks lack any damping adjustment, and there’s only pre-load on the rear, but it’s not needed because the T100 works straight out of the showroom. On occasions the pegs meet the road to give you an indication of its limitations and with a pillion or heavier rider on board some may want to add a little preload on the rear to reduce scrappage.

That higher-revving engine did encourage me to up the pace a few times. And, considering the design criteria of this model, the T100 is more than happy to indulge in a spirited ride. However, as is the case with most retro bikes of this ilk, quick direction changes at speed do require effort, and it feels like there is a lot of unsprung weight combining with that large-diameter 18-inch front wheel to slow the steering, particularly when the pace hots up above 70mph. The mechanical grip and feedback from the Pirelli Phantom rubber are faultless for this type of bike. 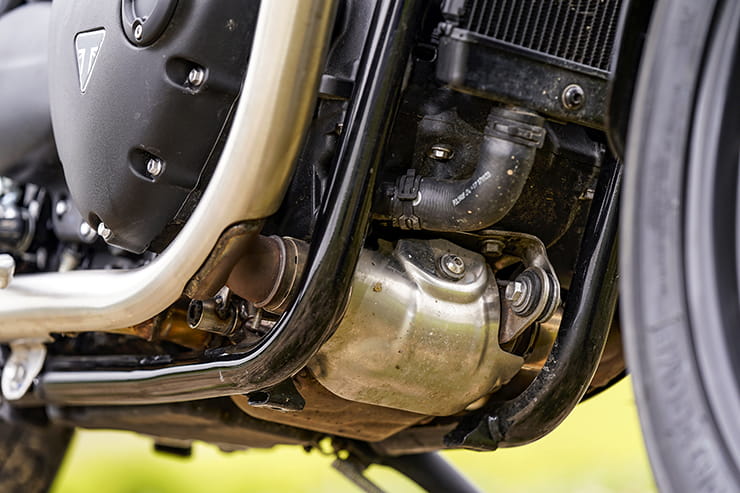 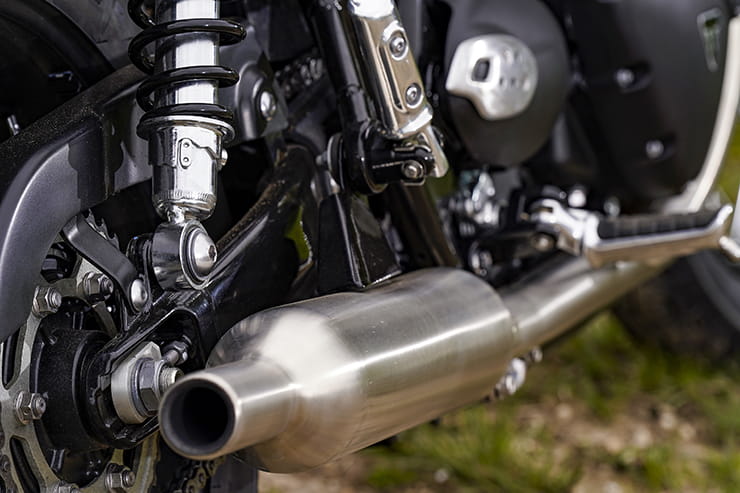 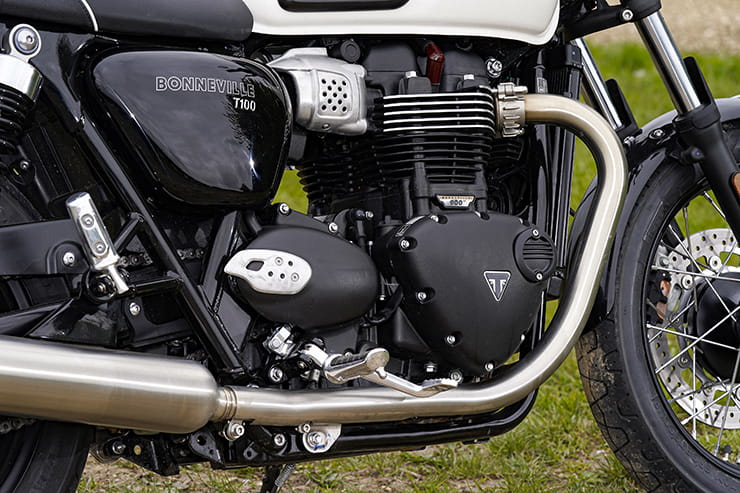 On most naked bikes comfort can become an issue because you’re always fighting the windblast, but if you’re riding the T100 quickly then you’ve bought the wrong bike and missing the true appeal of the Bonneville. Its happy touring pace is 60-70mph, possibly a little more when you want a quick overtake. At these speeds, I was always happy with the comfort and ride quality.

The seat is wide and plush, and there’s ample room for the pillion. The T100 is a place I could easily spend all day. I rode 240 miles in one day and had no complaints comfort-wise. The clocks retain an ornate look but are informative and easy to navigate – precisely what the customer requires.

Triumph quotes an incredible 69.9mpg, and despite my more than brisk ride, I attained just over 60mpg. Ride the T100 as it was intended, and you should reach around 70mpg – that’s impressive and means you’ll only be looking for fuel once past the 200-mile mark.

Yes, that is a Brembo caliper gripping the single disc, a significant upgrade from the old Nissin stoppers. Weight has been reduced, and brakes have improved in spec, therefore stopping has improved from the old bike. Don’t worry they’re not racing spec, but still nice and progressive and friendly for new riders. Nissin still activates the rear stopper. ABS can’t be deactivated and isn’t lean sensitive. 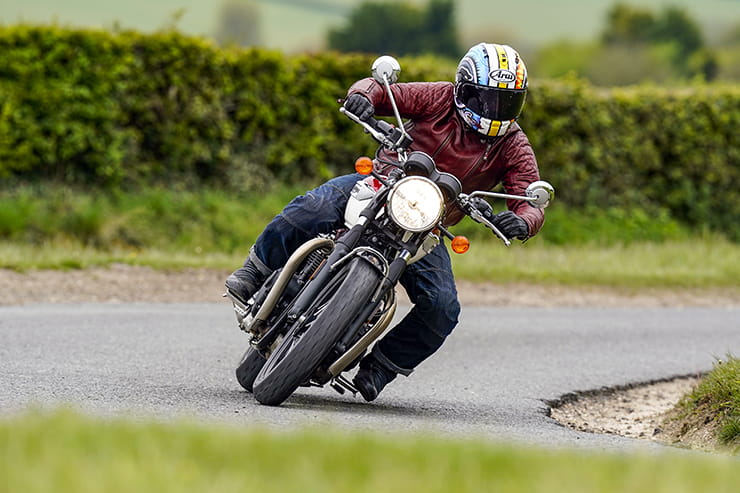 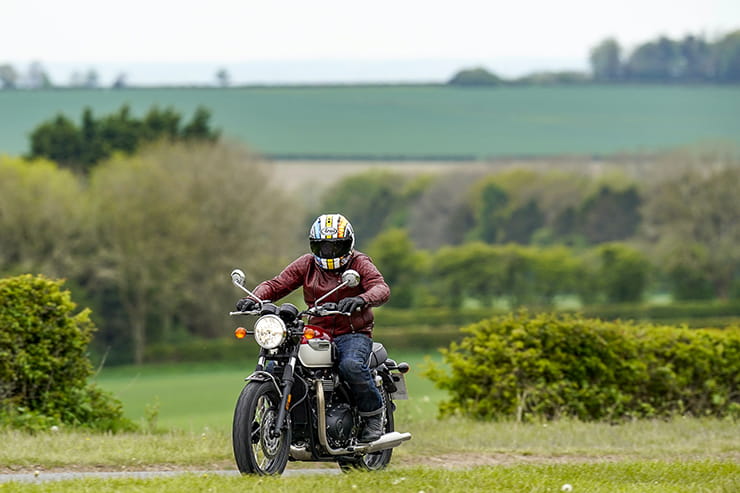 No launch control here, nor are there any rider modes, just conventional traction control and ABS. There is no IMU fitted to the Bonnie, which means lean angle is not taking into consideration – the rider aids are simply measuring wheel speed plus other sensors for gear and throttle position. There is an argument that TC isn’t even needed on a bike with such progressive, rider-friendly power but the counterargument is that the T100 is aimed at new and inexperienced riders who could benefit from an electronic safety net.

Clocks have been updated for 2021, and are hugely informative, easy to navigate, and yet retain a retro style. I love all the retro detailing around the bike: the hidden cat-converter and the original looking pipes, the twist-turn fuel cap, the original looking ‘carbs’, even the embossed Triumph logo on the bars, and brace across the front mudguard. This is a 2021 Bonneville, with modern fuel injection and rider aids, but it could easily be mistaken for an original – with a squint.

As I said earlier, I can’t see many models leaving Triumph showrooms in standard trim. There are 117 official accessories to choose from, and this bike is screaming out for some personalisation. With so many accessories you can really make the T100 your own, but you could quickly end up spending the family holiday money in the process.

The outgoing T100 was great but you were always aware you were riding a bike with limited performance. For 2021, Triumph has moved the goalposts. The engine and handling limitations have been eased yet it’s still unintimidating to the less experienced riders. It’s so good, it almost questions why you would want the larger T120, which only has 15 more bhp and weighs another 8kg.

I think the T100 is a brilliant jacket-and-jeans bike; grab your lid and just ride. Turn off your phone and enjoy the journey. I’d like a little more soul and character from the engine and exhaust tone, and it is pricier than the competition, but otherwise, a lovely bike to own, ride and enjoy. Take it easy, take a T100 for a spin. 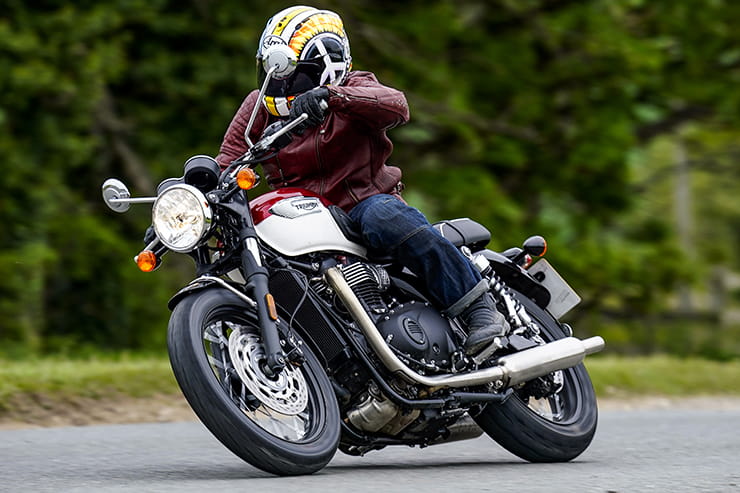 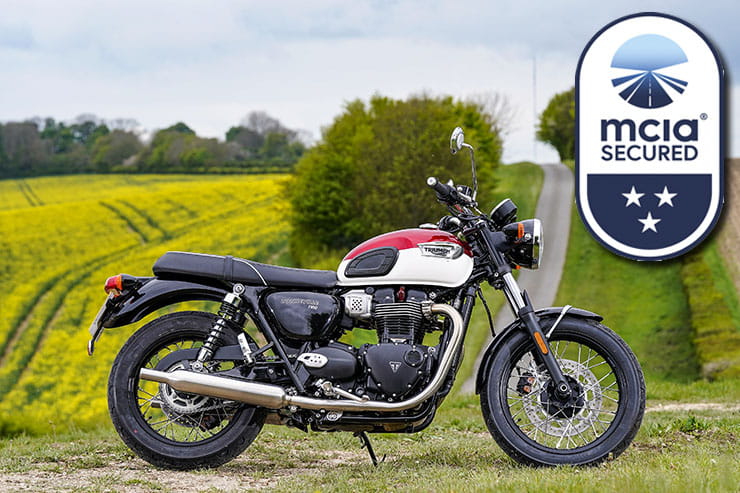