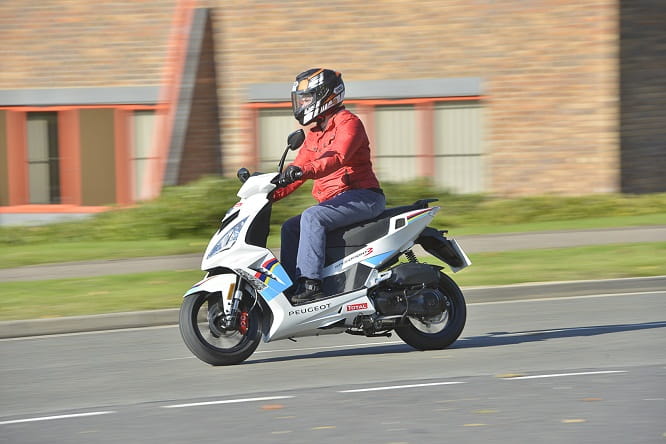 “Yes!” There is nothing subtle about the Speedfight in Team Sport colours and I love ‘em. Evoking memories of the insane 205 Group B rally cars of the 1980s (Google it kids) the Team Sport is Peugeot’s way of paying homage to its rich (car) rallying heritage. Drivers and team staff ride around on these in the paddock at World Rally Championship events, and now we can have one too. Good times!

Mechanically, the Team Sport is identical to the standard Speedfight 125 but for a £100 premium we get the rally style graphics and corrugated metal footboards. Whether it is worth the extra is subjective, but even at £2099 on the road, the pretty Pug represents excellent value for money.

The Speedfight is, of course, a legendary scooter already. First introduced in 1996 with 50cc and 100cc two-stroke motors, the French company hit the nail on the head with the cool styling (complete with single sided front end), zippy engines and competitive pricing. 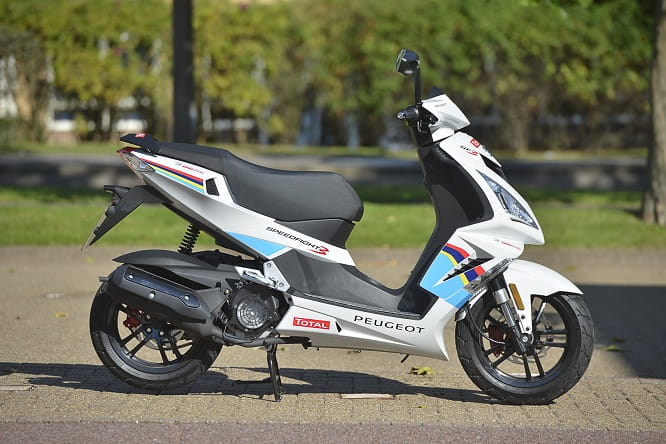 While the 100cc two-stroke has been replaced by a cleaner 125cc air-cooled four-stroke, the spirit of the original Speedfight lives on in these third generation machines. The funky single sided front end has gone, but the sporting 32mm upside-down forks are equally cool and work brilliantly. I’ve ridden more than a few scoots this year and nothing has put a smile on my face as big as this French filly.

Through corners, this is one reassured scoot. The suspension is composed, if a little on the firm side, with the largely unknown Hutchinson tyres offering good levels of grip and feedback. The dual-piston caliper brakes look cool as hell but felt very wooden when we picked up the brand new bike, but by the time we handed it back with over 200 miles on the clock they were nicely bedded in and the best brakes I’d ever experienced on a 125 scooter, delivering both excellent power and feedback.

Engine wise, the air-cooled motor does feel a generation behind the latest units from the Japanese manufacturers but is zippy enough. It’ll push up to 60mph quickly enough but struggles to maintain much higher speeds. Fuel consumption in my time with the Speedfight was just over 80mpg, but that was with a brand new bike that spent a lot of time at full throttle on open roads. Expect better when used in an urban environment.

Value is where the Speedfight trounces the opposition. The standard Speedfight is well worth the extra £200 over basic models like Suzuki’s Address 110, while the likes of the Yamaha NMAX and Honda PCX125 are £600 more expensive.

Those latter two are a bit more luxurious and less sporting. Between them, they feature technology like ABS brakes, stop-start systems and variable valve timing, and are generally endowed with better weather protection and storage capacity. 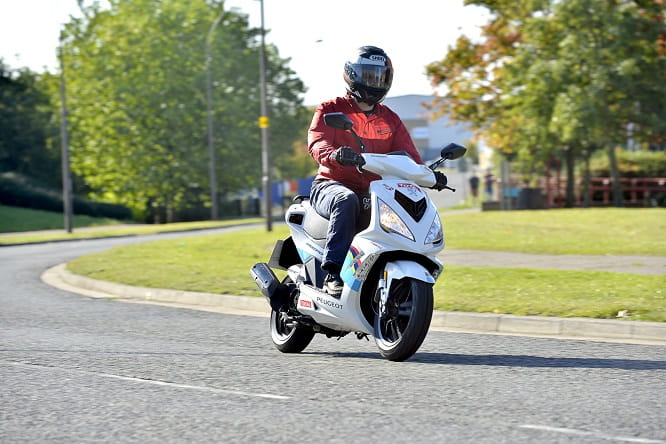 That said, the Peugeot beats both on price and has plenty to shout about itself. The simple engine makes for a scooter that’s a good 5-10kg lighter than the competition and although the seat feels quite hard at first, I did several 60 mile trips on it and felt as fresh as a daisy.

The built in 12v under seat power outlet is a great touch at this price and means that mobile devices can be charged on the go. The comprehensive instrumentation features a clock and fuel gauge, although I do have mixed feelings about the large rev counter that dominates the instrument pack. Frankly, it is pointless on a twist and go scooter and as a result it is hard to read the way more important speedometer. Looks cool though, so that’s ok!

The Speedfight made me feel 17 again. It’s fun and looks funky. After a few days I did think that perhaps the graphics were a bit tacky, but seeing each and every one of my colleagues’ reactions to the Team Sport livery, Peugeot have clearly got it spot on with the styling. 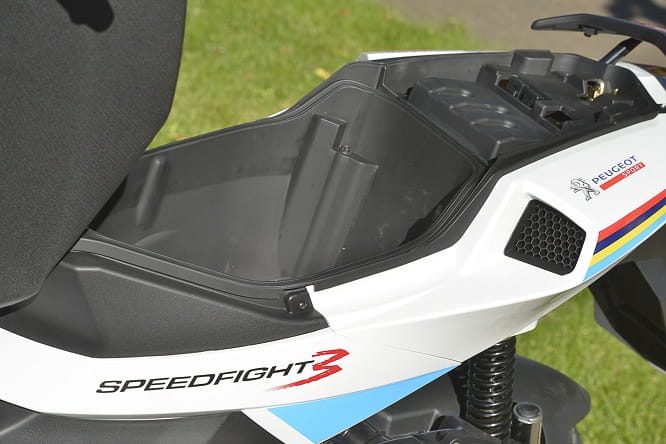 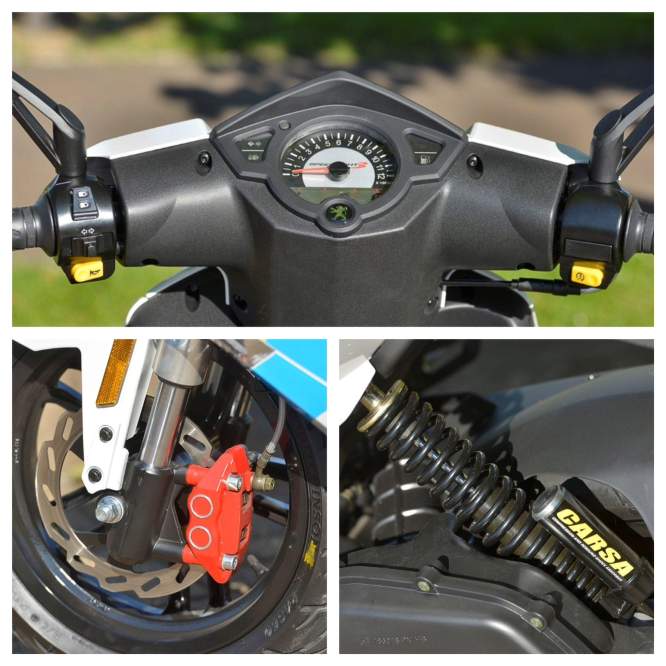 But the best thing about the Speedfight 125 is the price. Seriously, £1999 (for the standard version) represents stonking value for a quality 125cc scooter. It rocks!