Here’s a clue. It’s not a GS or a Fireblade, indeed you probably wouldn’t take a second glance when you see one in the street. That’s because the bike that consistently tops the UK sales chart is Honda’s 125cc PCX, an A1 licence compliant commuter scooter that can be ridden on L plates after passing the CBT and theory test from the age of 17.

This phenomenon is not confined to the small UK market. From Milan to Madrid, Paris to Palermo, the streets of Europe are awash with PCXs. And that’s before we count the gazillions sold in Asia, where they are even sold with 150cc engines.

It’s no wonder that other manufacturers want a share of pie, with Yamaha the first to move in on Honda’s territory with the all-new NMAX. 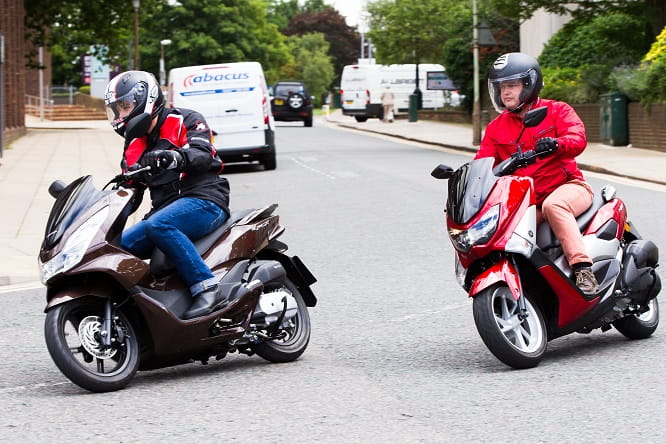 We attended the European press launch of the PCX-baiter last month and were pretty impressed, but wanted to reserve final judgment until we had a chance to ride it back to back with the scooter that pretty much anyone in a Yamaha shirt admitted was the class benchmark.

That said, Yamaha has a pretty impressive CV in the scooter market itself. The TMAX maxi-scooter has been a big hit on the continent for the past 15 years, but until now it has not had a direct competitor to the PCX in the midrange 125 sector.

Yamaha strikes first blood with the styling of the NMAX, which looks way sharper than the Honda, especially as our test PCX came in the bland ‘Pearl Havana Brown’ option. To be fair, other options are available with the red and white colour schemes looking particularly classy.

Although Yamaha unashamedly have the Honda in their sights, the NMAX is no direct copy. These are mid-range scooters, priced to sell at around £2,700, although for 50% more, both manufacturers will sell you their flagship 125 twist and go.

While Honda’s £4k Forza features a new four-valve motor, the less expensive PCX, which was introduced in 2009 and updated this year, makes do with a cheaper two-valver, albeit with plenty of tech (known as Enhanced Smart Power, or eSP, in Honda-speak) to improve efficiency and reduce emissions. 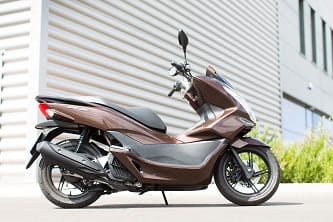 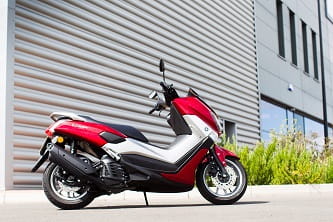 Against this, Yamaha has developed a brand new four-valve unit with variable valve actuation for its NMAX. It’s the first time such technology has appeared on a 125 scooter and has created an engine that is strong throughout the rev range. Although only producing half a horsepower more than the PCX’s unit at the top end, the Yamaha motor feels so much more potent. Top speed is more or less the same for both. The PCX generally tops out at 65mph, with the Yamaha squeezing out a few more mph under favorable conditions, but away from the traffic lights the Honda rider will be reading the NMAX’s number plate every time. Two-nil to Yamaha.

I’m not convinced that performance is at the top of most commuters’ wish list, but economy almost certainly is. Both of these scooters are economical, with Honda claiming 133.9mpg to the Yamaha’s 129. While we always like to test bikes thoroughly in the real world, both machines are just too frugal to calculate really accurate figures in the two weeks we had the bikes. We doubt that it will be possible to match the claimed figures on real roads, however the few hundred miles we clocked up suggests that the Honda sips just a little bit less than the Yamaha. The PCX also has a slightly larger fuel tank, eight litres to 6.6 litres for the NMAX, giving more than 200 miles between fill-ups. 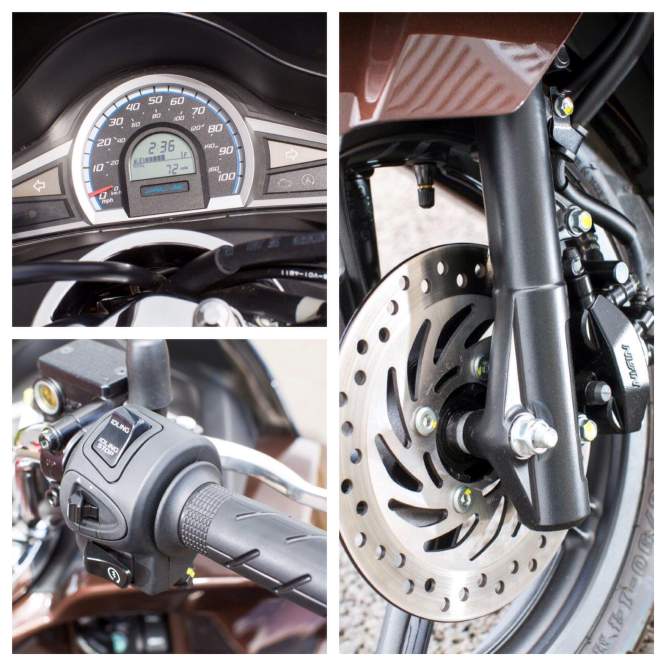 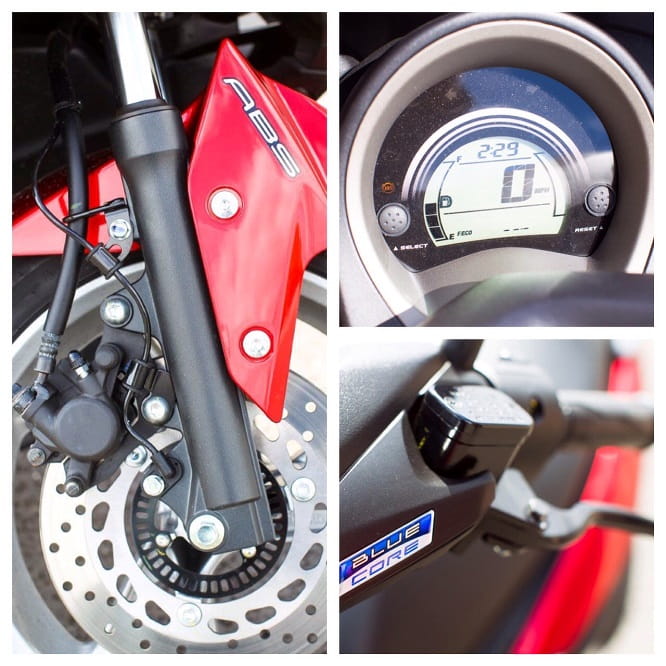 Yamaha’s other big claim to fame with the NMAX is the inclusion of anti-lock brakes as standard. Although available as an option in some markets, the PCX is not currently available with ABS in Britain.

That should be a big tick in the box for Yamaha, but unfortunately I found myself totally underwhelmed by the system, just as I did when we rode the scooter at the launch in Lisbon. On more forgiving British roads, I expected a more positive experience but unfortunately my opinion hasn’t changed. In normal operation it is absolutely fine, but hit the brakes hard and the system is very intrusive. As the wheels start to lock, the system kicks in. You can really feel the pressure build up in the levers as the ABS eases off the brakes. Not only is it an unpleasant feature, I am pretty sure that I would be able to stop in a shorter distance without assistance, something I wouldn’t say about my ABS-equipped car and motorcycle. By contrast, the non-ABS PCX stops with the minimum of fuss. If anything the brakes feel a little weak, but they bring the scooter to rest in a safe and progressive manner.

In general, the PCX delivers a plusher ride than the sporty Yamaha. Neither is uncomfortable but I found the Honda rode better over rough surfaces and had a slightly better appointed seat. As in the engine department, the Yamaha’s chassis does feel that little bit sharper, and the OE Dunlop ScootSmart tyres are a definite step up from the budget IRCs specced on the PCX. For the average city commuter it’s unlikely to be a priority, but for those planning to ride more on the open roads, the Yamaha again is the more exciting option.

But the excitement is all relative, of course. They are, at the end of the day, 125cc scooters designed first and foremost for practicality. Sure, there are cheaper options out there but these are both classy and well appointed, with modern engine designs and the sort of build quality and dealer support you’d expect from such top notch brands. A look at the spec sheets suggest that these two are virtually identical, even down to the on-the-road prices (£2,699 for the Honda, £2,671 for the Yamaha). 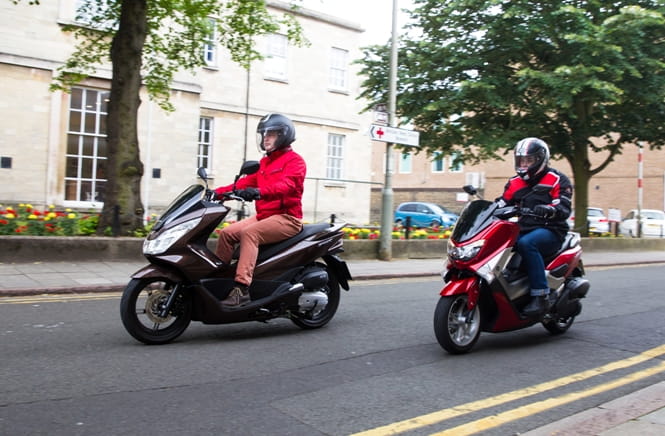 If this road test was a football match, these two would be battling out a hugely entertaining score draw. The Yamaha takes an early advantage with its sharper styling and goes two up with that peppy four-valve engine. Despite that, the PCX manages to hang in there and grabs a lifeline when the NMAX’s star man, the ABS system, puts it past his own keeper. From there on, the Honda comes into its own, grabbing a late equaliser with its all-round comfort and quality feel.

I’d say that both are equally good, just offering slightly different strengths and weaknesses. For me, the PCX takes it on penalties, the Yamaha having no answer to its rival’s neat touches. Both have very effective LED headlights, but the Yamaha can’t match the Honda’s built in charging socket, hazard warning lights, wider dealer network and superior fuel economy.

It’s close though. The NMAX certainly gives the reigning champion a good run for its money and the real winners are us, the consumers. Choose the one that best meets your needs, choose the one you like the look of, choose the one with the nearest dealer. Choose whichever you want, because you won’t be going far wrong. They’re both great little scooters. 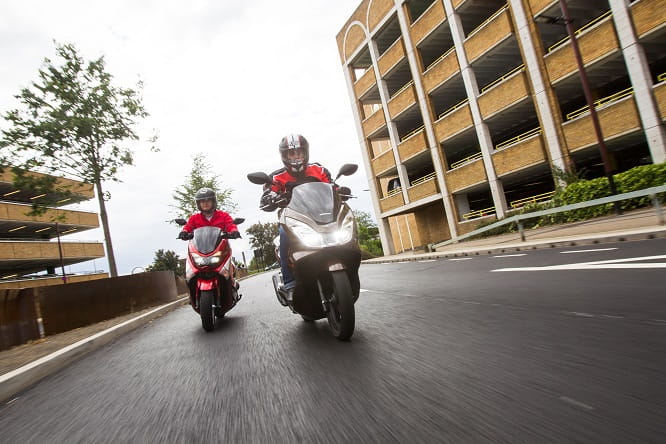