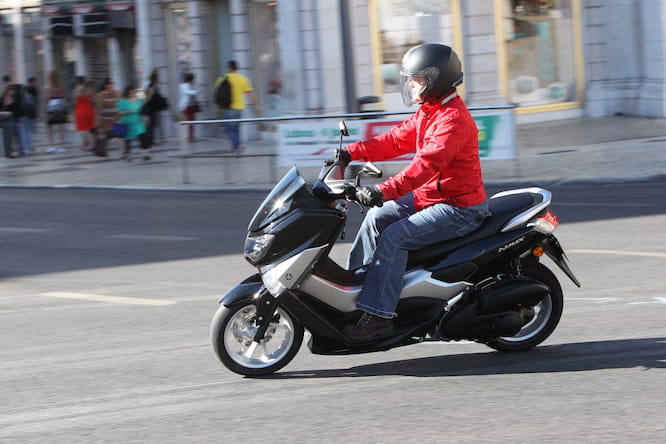 They’re pretty bullish over at Yamaha these days. The Iwata company is back on track with some great products, and they’re not hiding who they are after with this, the newly released NMAX 125cc scooter.

Honda’s £2,699 PCX125 is consistently one of the best selling powered two-wheelers in the UK and beyond, but not for long if Yamaha has its way. The NMAX comes filled with some cutting edge tech and a price tag that aggressively undercuts the PCX by exactly £100. It’s fighting talk alright, but does the NMAX have what it takes to topple the class leader?

To find out, Bike Social travelled to Lisbon and the world press launch, where we spent a day riding around the Portuguese capital to see what the new scoot is made of.

The headline figures for the NMAX are the new engine, featuring variable valve actuation for the first time on a scooter, and the standard adoption of anti-lock brakes -  a unique feature at this price point.

At the heart of the NMAX is an all-new 125cc four-valve engine which has been equipped with variable valve actuation. The engine is definitely the star of the show, switching seamlessly from the low speed cam to the high speed cam at 6,000rpm, giving good low down torque without compromising performance at higher rpm. Yamaha claims that it is usually easy to develop an engine that is strong either in the low or high rpm range, but not both. This is their solution, which is controlled by an electrical solenoid and is almost seamless in its delivery, with just a pleasant change in delivery as the profile changes. Not shy about comparing the NMAX’s performance to its Honda rival, Yamaha claims that the 12bhp (9Kw) will see their scooter two-and-a-half bike lengths ahead in a 200m sprint. Honda claim 8.6Kw (11.5bhp) for the PCX. 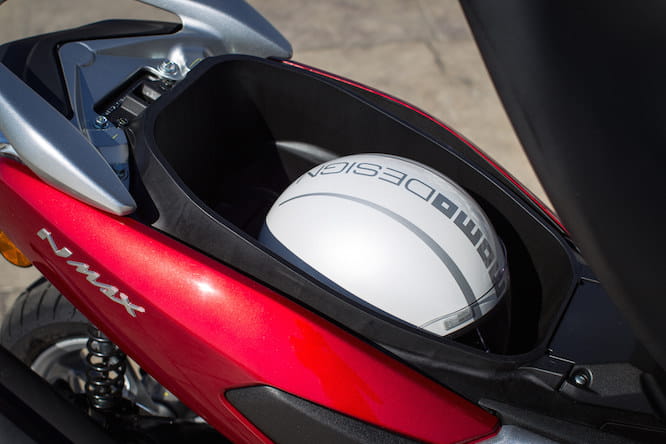 Of course, speed is not what 125cc scooters are about, but being nippy most certainly is. Through the seemingly never ending cobbled streets of Lisbon the sporting ride seems harsh. It’s very much an urban bike and Yamaha’s test route gave us little chance to stretch the scoots legs. On one of the few stretches of open road, we were able to see 109kph on the clear LED readout (with a little in reserve). Yamaha claims 100kph (62mph) as the official top speed, but either way its adequate for short M25 commutes.

Indeed, Yamaha claims that the whole project was about minimising the compromises that come with making a motorcycle, and also trying to blend their own DNA of ‘active’, ‘fun’ and ‘agile’ with the boring everyday stuff that the modern consumer requires, such as economy, stability and spaciousness.

They claim that they’ve done this by going to painstaking lengths to reduce frictional losses in the motor. Details include an offset cylinder design using a special low-friction DiASil (Die Cast Aluminum Silicon) coating and the adoption of a roller rocker arm, while the trendy LED lights have been chosen as they require less power than traditional halogen bulbs, therefore allowing use of a more compact electrical system. The result, they say, is that they’ve been able to reduce frictional looses by 18%. Who says it’s ‘just’ a runaround? 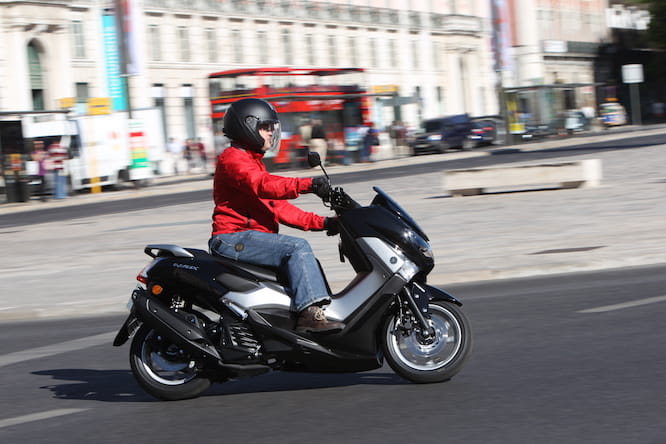 The cycle parts are high end too. The 13” wheels have been fitted with premium tyres in the form of Dunlop’s ScootSmart rubber and on the road it feels very agile and stable, although naturally the ride is not as plush as on the bigger wheeled scooters, a point very much brought home on the harsh Lisbon streets.

I'm a big fan of anti-lock brakes on motorcycles and the inclusion of such a system is a big selling point for the NMAX. For all that, I was totally underwhelmed by Yamaha's new system, which is way more intrusive than you’d expect on a car or full sized motorcycle. Due to their light weight, non-ABS scoots have a tendency to lock the rear but in theory, the NMAX’s ABS eliminates that. Under hard braking, you can feel the wheel start to lock, before the lever hardens unpleasantly as the computer intervenes. I didn't feel like I had as much control of the brake as I would like, especially with the rear. It's ok under normal braking conditions, and new riders probably won't know any better, but personally I thought that the feeling under maximum braking was a little disconcerting and the NMAX's biggest flaw.

Compared to the little Suzuki Address 110 I’ve been running around on for the past few weeks, the Yamaha feels more substantial, peppier and generally more assured, but it should do at £800 extra. The point is, if you are simply looking for a cheap set of wheels, there are other options around (including Yamaha’s own, weirdly named, sub £2,000 D’elight) but if you want something a little more premium and with a bit more presence, it’s definitely worth looking at an NMAX type of machine.

That extra buys you things like the ABS braking system, a nice touch at the price point and comprehensive instrumentation. Where bargain basement scooters can feel a bit ‘pizza delivery’, machines like the NMAX certainly have an air of ‘urban chic’ around them. It’s a thoroughly modern and trendy scooter that comes in four metallic colour options. As the hordes of Italian customers may well say, for me is good. I like.

Of course, all the tech means very little to many riders, who will be looking at the NMAX as a practical way to get to work on a daily basis. It’s not super-specced like some of the more upmarket models, such as Honda’s Forza and Yamaha’s own XMAX, which is sportier but struggling to justify the extra £1,400 you’d have to hand over to your local dealer. 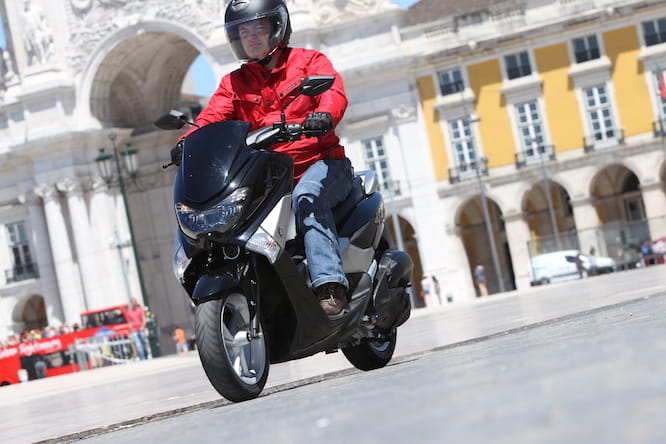 We didn’t do enough miles on the press launch to work out the fuel consumption, but Yamaha claims 129mpg using the standardised combined cycle used by all the Japanese manufacturers. That’s slightly less than the 133.9mpg claimed by Honda for the PCX125, which should have a significantly larger range thanks to its eight litre fuel tank, compared to the 6.6 litres of the NMAX.

And in an ideal world I would have liked a USB charging port and glovebox (although the deep cup holder style stowage space under the handlebars is very usable), and perhaps some way in which to integrate an iPhone into the dash (for navigation and ride tracking), but I accept that it would all add to the retail price. There are a range of accessories designed to go with the NMAX. If the space under the seat is not enough, there’s the option of a 39 litre top box, while the larger windscreen may prove a popular choice for year-round commuters in the UK. Hand guards are also available and although we didn’t get a chance to try them on the launch, we’re assuming Yamaha made them to be very effective – ‘cos they certainly didn’t make them look attractive!

The reason that Honda sells so many PCXs is simply because they are indeed Hondas, with accessible finance, professional dealers and a reputation for reliability. Yamaha have identified this too with some very aggressive pricing and, no doubt, some attractive finance offers through the miYamaha scheme. 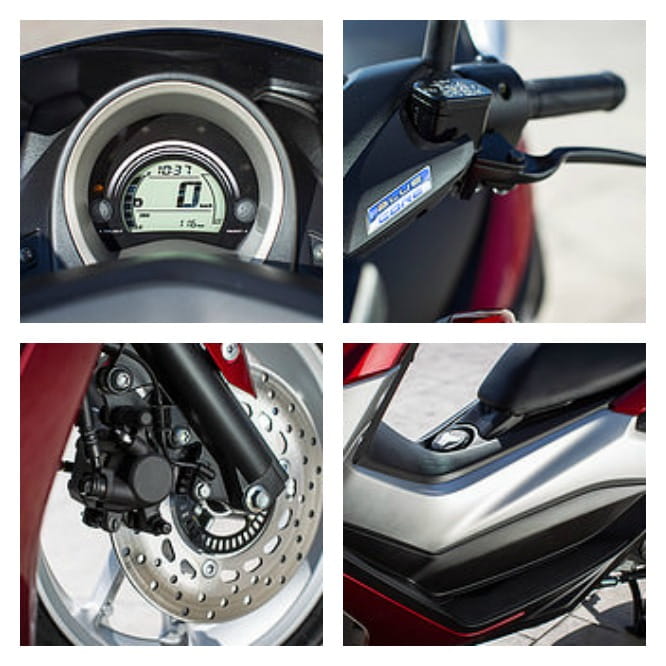 The NMAX is a cracking scooter, that’s for sure. Whether it is actually better than Honda’s class leading PCX125 can only really be determined by riding them back-to-back in the UK, but certainly it wins on the spec sheet and on the price tag. Don’t also discount Yamaha’s clever Tricity either. Although its aimed at a slightly different audience, the three-wheeler is brilliantly stable and well worth a look for the urban commuter.

Whichever you choose, you can’t really go wrong, but my money’s going to be on the cheaper and more modern NMAX just shading it. After all, who’s gonna argue with Yamaha in the mood they’re in!