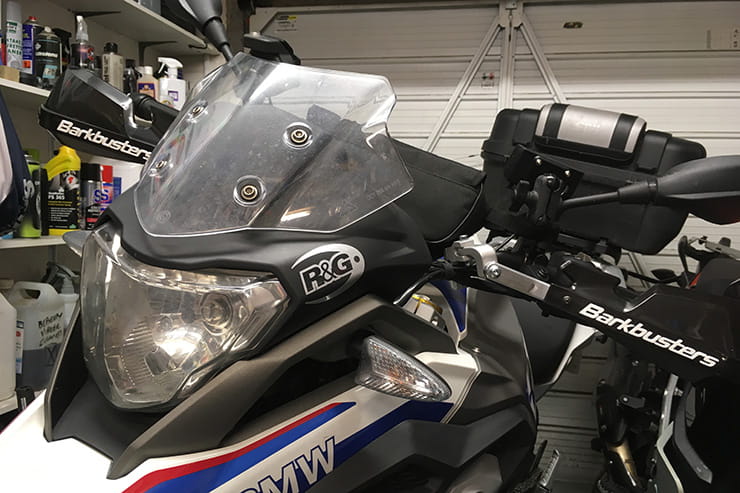 The BMW G310GS is light, easy to move around and genuinely confidence-inspiring; it makes me far more willing to explore off the tarmac, but that comes with the fear of potentially taking a tumble.

I should admit that I’ve crashed one of these already – check out the video review from the launch to see how I slung it up a dirt track while trying to show off – but the design of the large rear grab rails means it suffered very little damage. Still, I was worried that worse could happen if I did get things wrong, and I’d hate to give this bike back to BMW with any scuffs. Though with the way I still feel about this machine, I’m not sure I’m going to want to give it back at all…

BarkBusters handguards come in two parts – the extremely solid aluminium backbone that clamps securely to the end of your handlebar and near the centre (£87.99), and the plastic guards that screw over the top. There are various options, but I prefer the VPS guards for £33.99, which offer good coverage, and can be extended further with the included wind deflectors.

Designed to protect your hands and levers from branches as you conquer the most wild terrain, they also provide some great wind protection, helping to keep your hands warmer in winter. And, frankly, they look good. 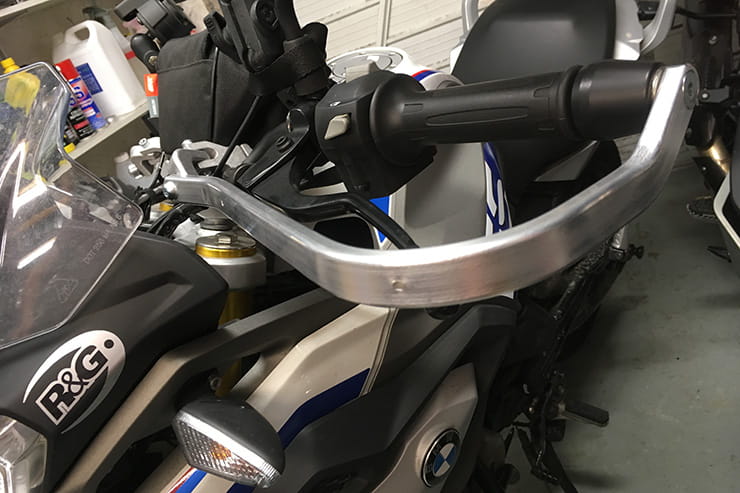 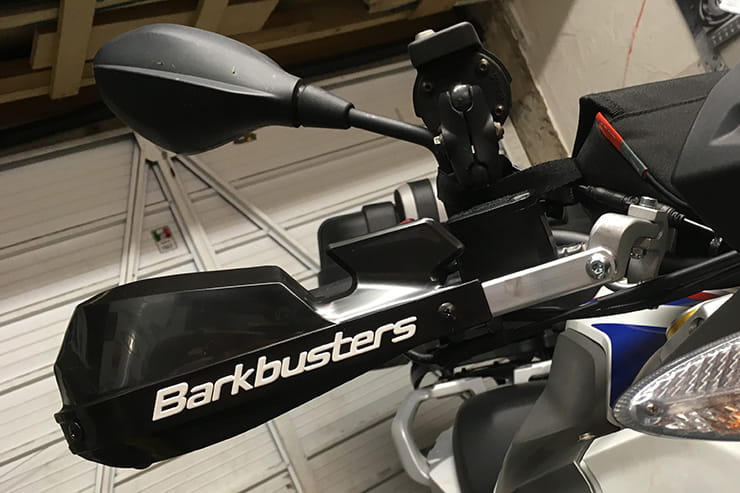 You could use the company’s universal-fit handguards, but those replace the bar-end weights, and the levers poke out of the backbone – these G310GS-specific ones retain the original weights, screwing in through them by replacing the bolt and making for a much neater fit without affecting vibration through the bars, yet not significantly adding to the width.

Fitting requires a 5mm hex drive or Allen key, a 10mm spanner and a Philips head screwdriver. Torque settings are supplied in the manual – 10Nm for the M6 bolts and 20Nm for the M8 – but if you don’t have a torque wrench, just take care not to overtighten.

It’s a fairly quick job, the longest process being finding the right angle. The right-hand guard does just touch the screen at full lock, though the left doesn’t despite them both being at the same height; clearly there’s a slight discrepancy in steering travel.

While incredibly tough, the BarkBusters aren’t overly heavy, adding a total of just 472g to either side of the bars. I doubt I’ll be smashing through the trees one the mini-GS, but they’ll protect the levers if I do take a tumble, and will be great in the winter. 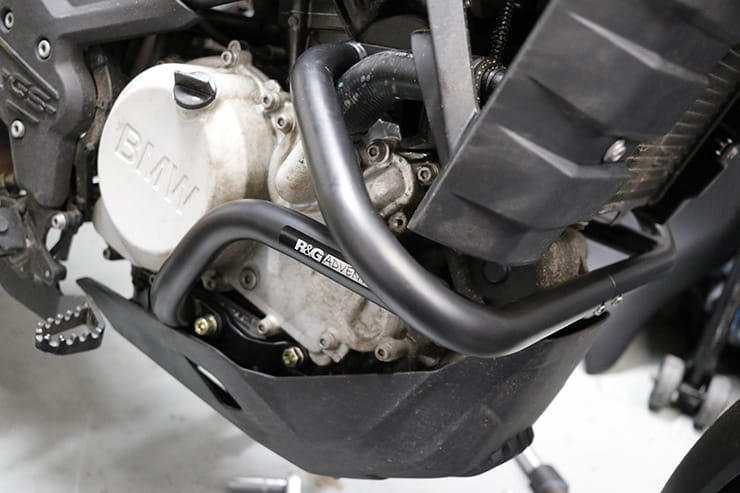 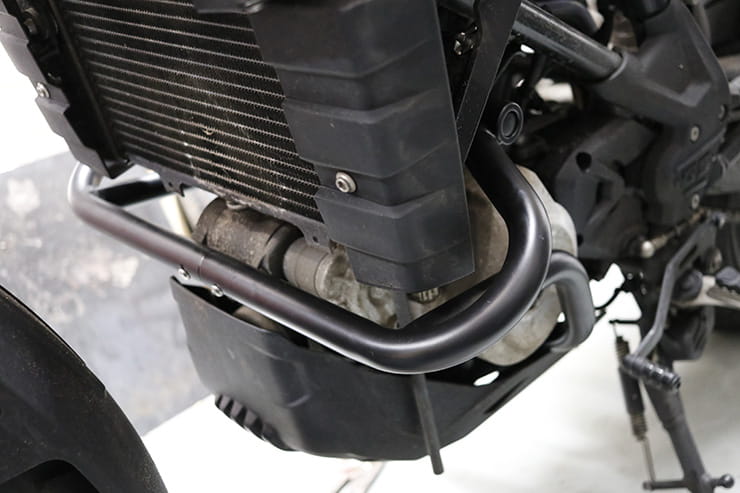 Fitting the crash bars is fairly simple, though a bolt gauge and torque wrench are useful

Offering solid protection to the front and lower sides of the BMW’s engine, these crash bars take only about half an hour to fit. You’ll need a fair few tools – a 4,5,6 and 8mm hex drive / Allen keys, 12 and 13mm sockets, ideally a torque-wrench, and large mole grips if you use the spacers on the sump guard (more on those in a moment).

The instructions are rather dark, and it’d be great if R&G could give an actual-size guide to the bolts, which would make it much easier to select the correct ones during assembly; it helped having the Pro-Bolt measuring tool that my mate bought me for my birthday years ago. 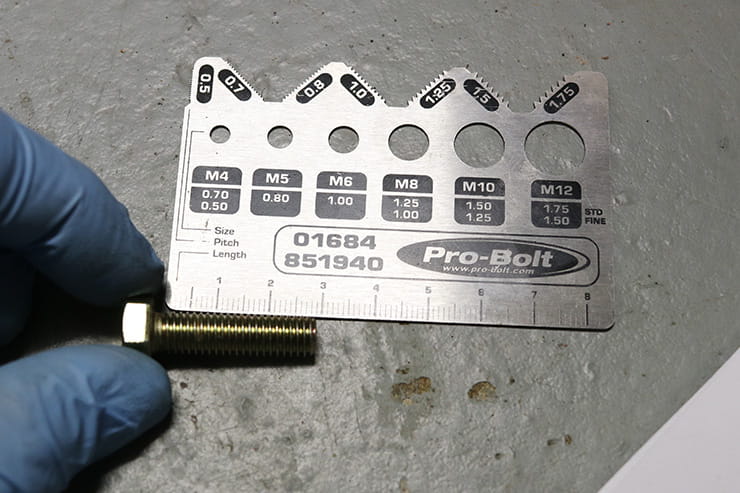 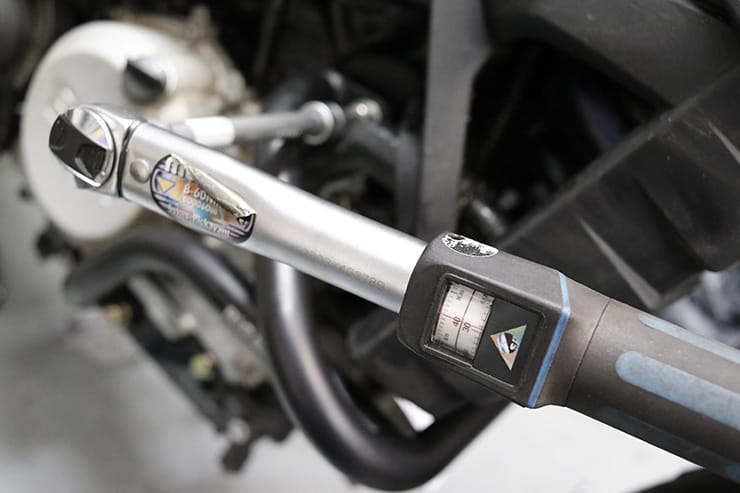 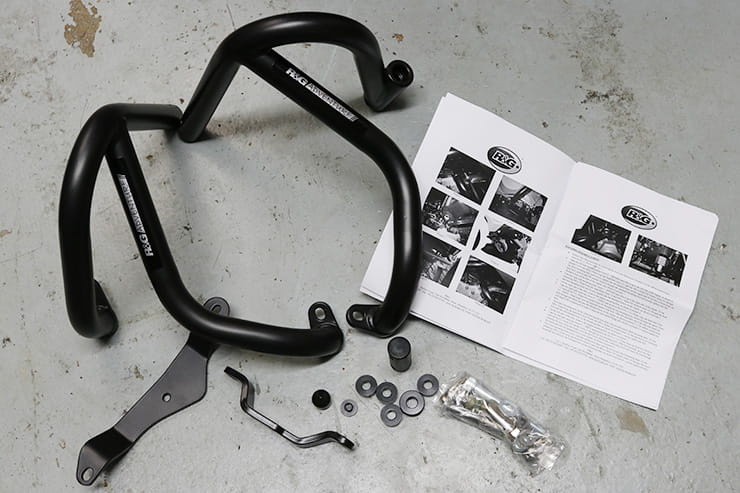 Fitting the crash bars is fairly simple, though a bolt gauge and torque wrench are useful

Recommend torque settings are included, and the finish is generally good with neat welds – my only disappointment was that when nipping up the bolt that joins the two halves of the bars together at the front of the engine, a small piece of the black paint flaked off. This is right in the firing line of crud from the wheel, so needs touching up. 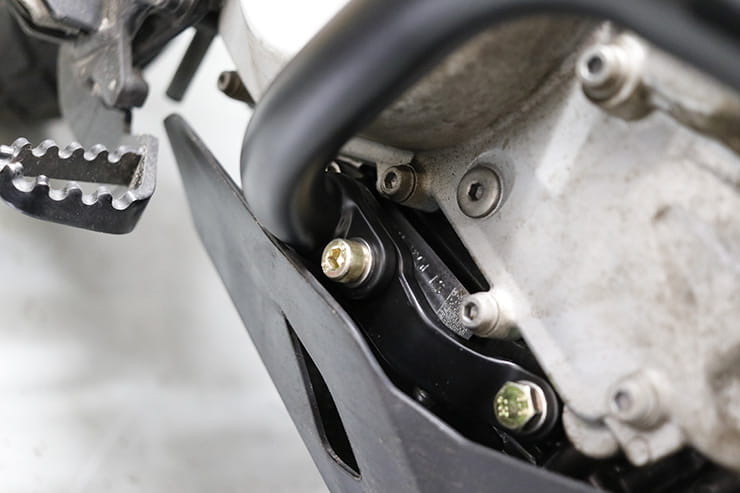 Without the spacers, the sump guard just touches the bars

Four 8mm spacers are supplied to lower the plastic sump guard – this is where you’ll need the mole grips, but I don’t like how they leave very little thread from the rubber-isolated mounts to screw into the bottom of the sump. This feels rather vulnerable, but also of course reduces ground clearance. However, the guard is plastic, and easily distorts over the crash bars without looking strange. It might rub at the paint of the bars, but if that’s a worry (and you haven’t borrowed the bike from BMW) you could always trim a little of the plastic away.

I’m glad to have the bars on the bike – hopefully they won’t be needed, but they’re certainly tough if they do get used. 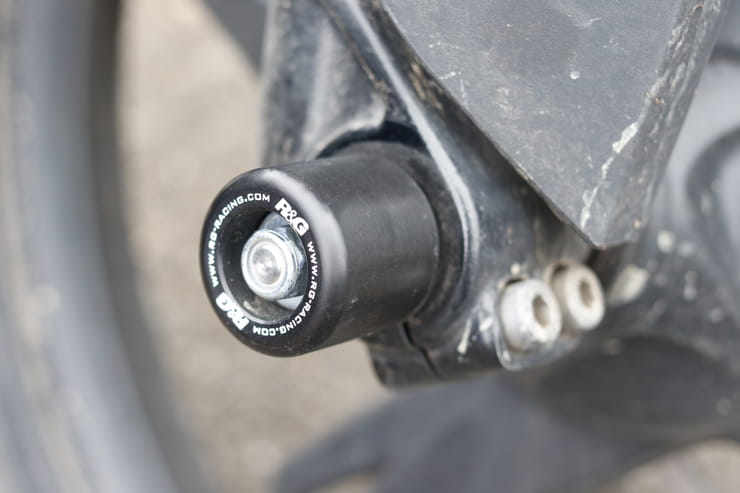 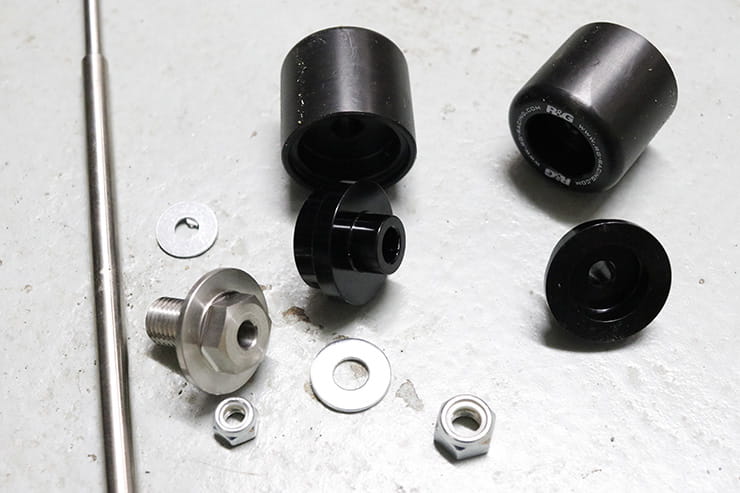 The bottoms of a motorcycle’s forks are easily scuffed in a drop (it’s one of the first places to check when buying a used bike), so this easy-to-fit kit offers some useful protection.

They take only around five minutes to fit, requiring an 18mm socket to remove the existing axle bolt (not 17mm as printed in the instructions), and a 16mm for the new one, plus a 13mm and 10mm socket for the nyloc nuts that keep the protectors in place.

Unfortunately, the torque settings aren’t printed in the instructions, but a quick check of the BMW owner’s manual shows that the axle requires 50Nm. You don’t need to remove the lower fork pinch bolts (19Nm) to fit the protectors.

One thing to keep in mind with fork protectors is that they do stick out a little – not a problem on the road, but if you drop into a rut on a byway, they could get caught up. 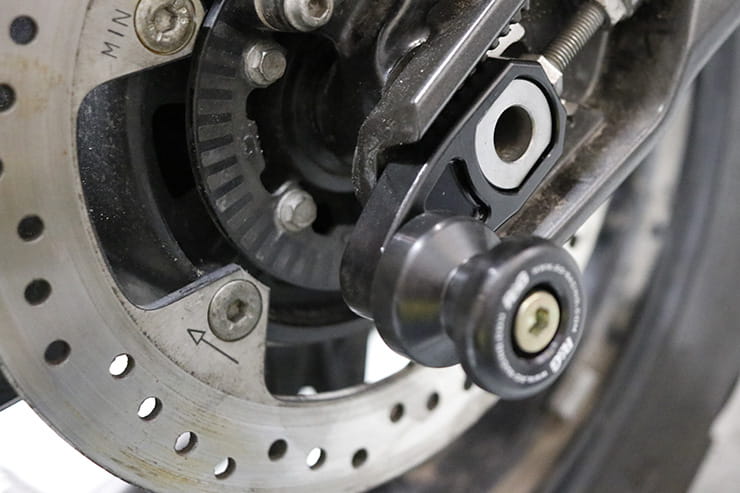 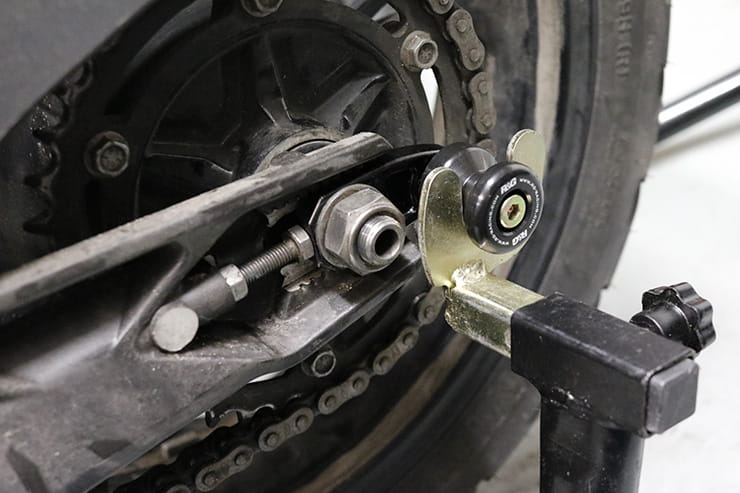 With no centre stand on the BMW, these bobbins give you the chance to jack the bike up on a paddock stand for chain maintenance. Using two machined aluminium spacers, the bobbins are set back from the axle to avoid hitting the exhaust when the suspension compresses, and help protect the ends of the aluminium swingarm in a drop.

You’ll need to get the rear wheel off the ground to fit them, so will have to find a way of supporting the bike (or winching the tail up). Fitting takes about five minutes once that’s sorted… unless the rear wheel drops out, then faffing to get the disc to locate in the rear caliper means it takes about 30, as I discovered. 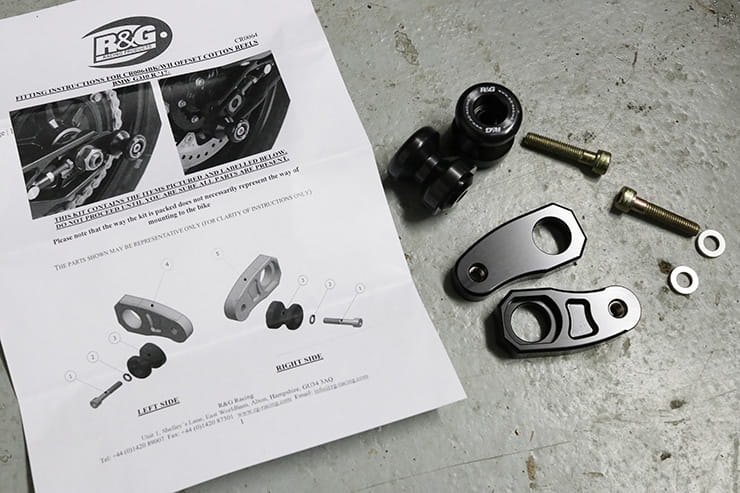 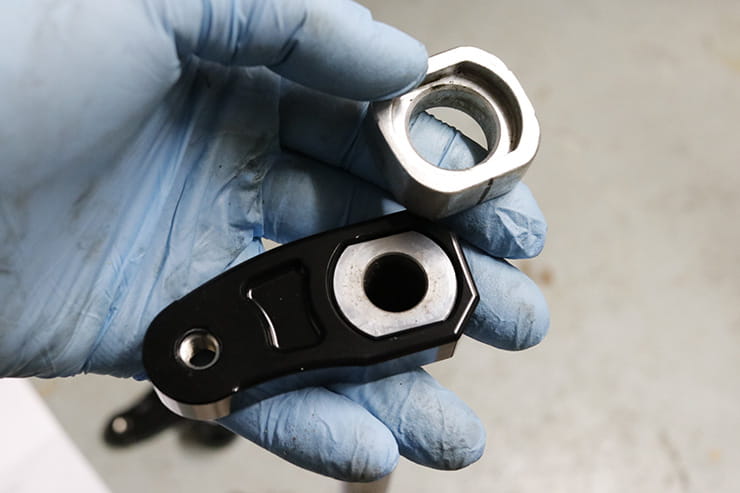 As with the fork protectors, the torque settings aren’t stated, but you need a hefty 100Nm on the rear axle – it’s best to use a torque wrench if you have one. Otherwise, you’ll just need a 28mm socket and a 6mm hex drive / Allen key.

You could use a paddock stand that fits under the swingarm to clean your chain, but it’s not as easy as one that cups bobbins, but you need to remember that, because these are held in place with the rear axle, they’re no use if you’re dropping the wheel out. 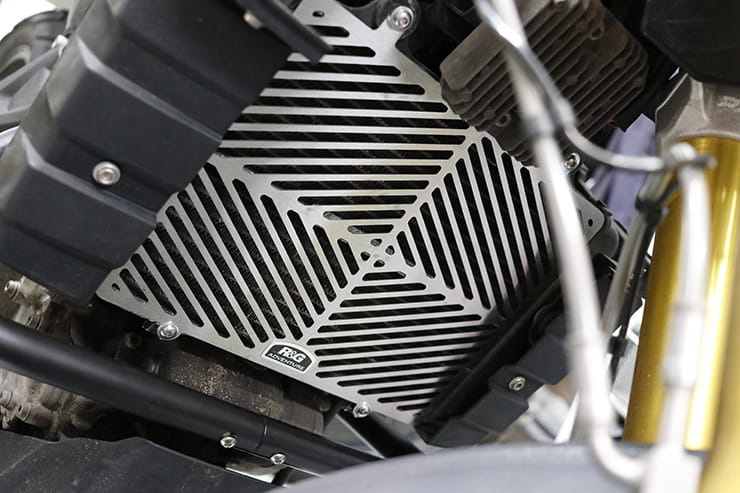 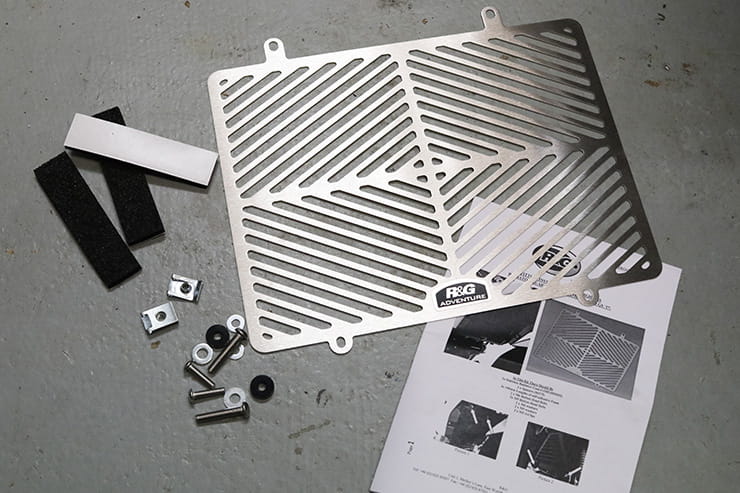 Made of 1mm-thick stainless steel, this laser-cut guard will help prevent anything flung up by the front wheel from damaging the radiator.

Fitting is pretty easy, and you don’t need to take the wheel out to get to the bolts you need – expect it to take about 10-15 minutes, and you’ll need 3,4, and 5mm hex drives / Allen keys.

There are strips of adhesive-backed foam that need to be cut down to 10mm strips then stuck on the back of the guard (it’s a shame they’re no precut, or better still already applied), but they’re not seen once the guard is in place.

The stainless steel construction should mean it’ll last well, and it’s far better than losing your coolant in the middle of nowhere…

• Even with the crash protection, it’s still light and easy to move

• People who understand the concept love it

• Sneers from some other riders: “It’s too small”; “It’s made in India”

• Wasting time correcting the above