BMW G310GS blog: The day my BMW crashed itself 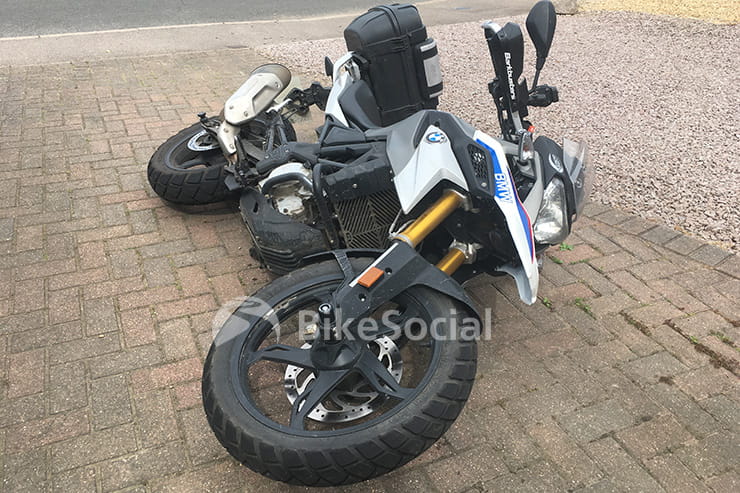 The clatter of metal and plastic hitting the ground was all the more surprising given that I was standing ten feet away from the bike.

I’d just pulled the BMW out of the garage to clean it; I wheeled it back from the right hand side and dropped it down onto the stand. It shifted slightly. I thought nothing of it (how many times has a stone pinged out from under your side stand?) but a few seconds later, while I was collecting my cleaning kit, the crash happened.

Luckily my wife’s car wasn’t parked where it usually would be. And luckily it didn’t happen the day before, when my young daughter was sat on it. That’s the most weight the stand’s had on it – I’ve never climbed on this bike with the stand down, and I’ve never spun it around using the stand as a pivot. But I expect a stand to be strong enough for that, and it is something I’ve done regularly with my KTM 1050 Adventure. And every other bike I’ve had for that matter. 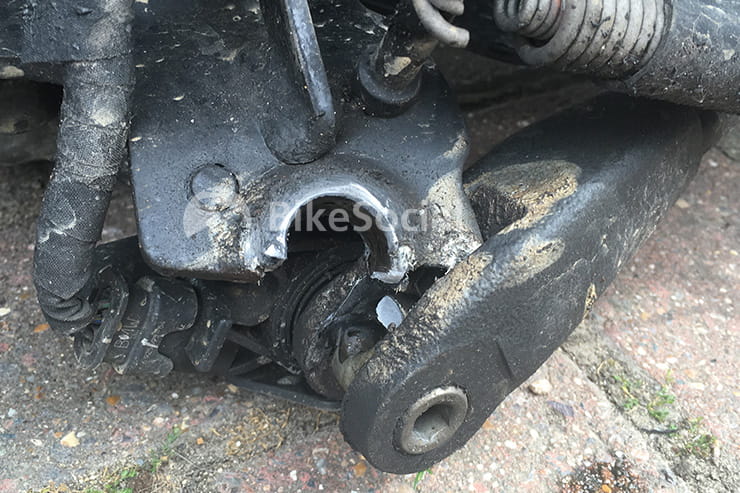 Why did the BMW's side stand fail?

The G301GS’s side stand pivots in a bush that’s welded into the bottom of the frame. This creates a relatively small contact patch on the sides, so all the force goes through the bottom of the bush. If that bush snaps, the stand rolls out and collapses.

Because the stand bracket is part of the frame, the entire frame is broken – a big job to replace. 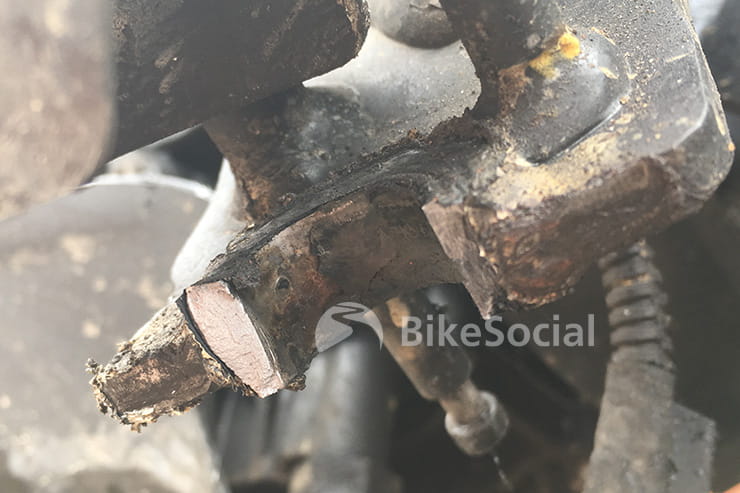 Looking at the broken metal in the stand bracket, it appears very brittle

What does BMW say?

This happened on the 23rd June 2018. As it’s a long-term test bike on loan from BMW, the first thing I did was to call the UK headquarters. It turned out that the team had – the day before – got notification of a potential issue from Bavaria. Shortly after, the US and the UK released a statement: “BMW Motorrad is running a recall campaign to check the side stand connection in the models G 310 R and G 310 GS from the production period 12/2016 – 05/2018 for prior damage and install an additional bearing block for reinforcement purposes so as to prevent any potential bending or, in extreme cases, breakage.

“Since it is not possible to completely rule out an insecure standing position of the vehicle where this fault occurs, BMW Motorrad is fitting the vehicles with an additional reinforcement. 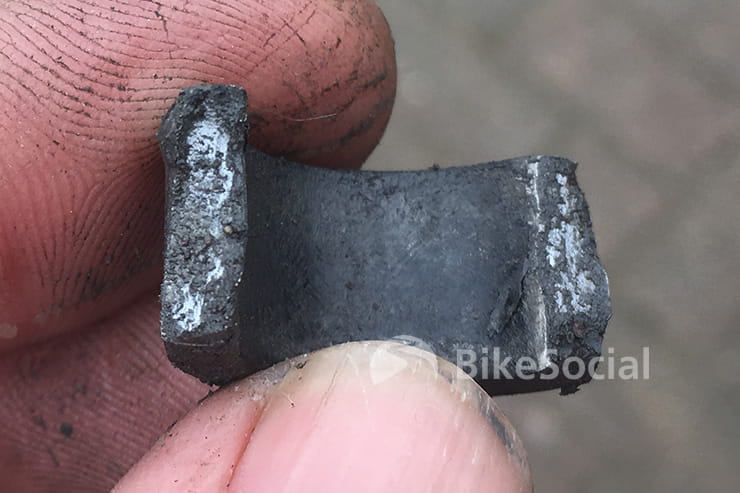 This is the piece of metal that snapped off, leaving the bike to fall

“Buyers of the motorcycles in question will be contacted by BMW Motorrad in writing or by phone. The recall is free of charge to customers.”

Owners will be written to by BMW Motorrad – or by BMW dealerships directly – and requested to make an appointment with their BMW Service Partner to carry out the recall campaign. It’ll take about half an hour to reinforce the stand connection, and if anyone is yet to receive a letter, they can still contact their dealer to book an appointment. 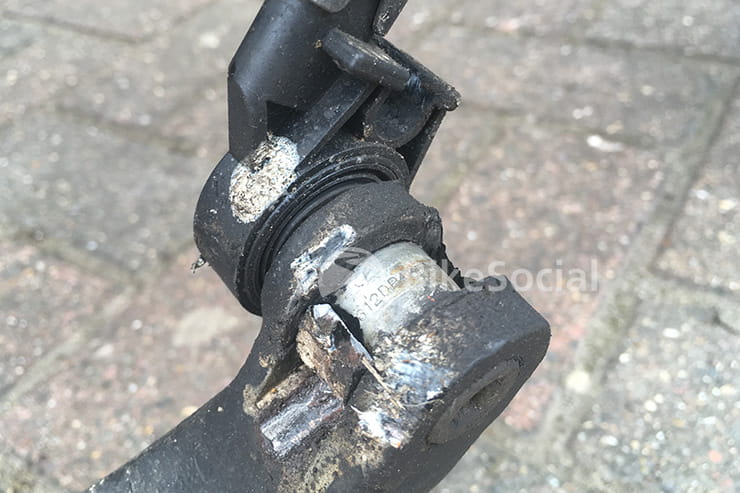 We tried to speak to the project leader of the G310GS in Germany, but unfortunately haven’t been able to make contact yet – we’ll update the article as and when we can

Is this the end of our test?

I’ve been unlucky as my stand broke before it could be reinforced. While I know it hasn’t been abused during my care, this was one of the press launch motorcycles originally, so would have been treated fairly harshly. That’s no excuse – this shouldn’t happen – but it could help explain what pushed mine to failure before it could be remedied.

Any magazine or website’s long-term test bikes are owned by the manufacturer’s UK press office, so if something happens to them, they have to go back there. But I asked BMW what the situation would be if a customer were unlucky enough to suffer a broken side-stand support: “Within 30 days, by law, a customer can choose to reject the bike and get a full refund,” a BMW spokesperson told me.

As with any manufacturer, after six months the burden of proof falls to the customer (though BMW customer services would deal with any case on its individual merit), but this is irrelevant for the G310GS as it hasn’t been on sale for six months yet, and the recall will reinforce any bikes before that point.

I now have a replacement machine, but I also spoke to TJ of BMW dealership Balderston in Peterborough, who told me “If a G310GS had its stand snap out on the road, BMW assistance would come out and recover the bike, take it to the nearest dealer and sort out a hire car for the customer. This is regardless of whether it happened ten miles from the customer’s home, or somewhere in Europe.

“If the bike was at the dealer and the stand was showing signs of weakness, the customer would be advised to stop riding it and arrange for the reinforcement to be one. Beyond that, it’s at the discretion of the dealer, but here at Balderston, as a matter of course we’d offer the customer a loan bike for the duration.”

My new bike isn’t fixed yet. It still needs the reinforcement, but there are no signs of weakness in this one at the moment. It’ll let you know how the remedy goes… 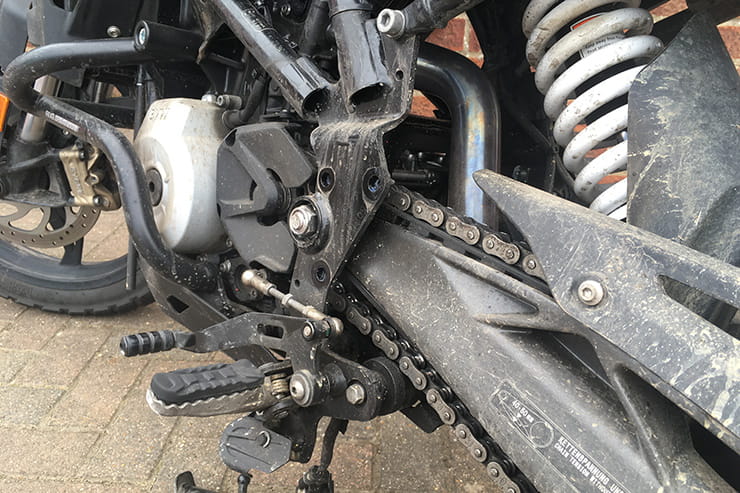 The side stand is mounted directly to the frame, so the entire bike will need to be stripped for repair

Do I still love it?

I do. I’m disappointed, no doubt – and after recently writing that ‘BMW has clearly spent its budget in the right places’, something has obviously gone wrong with the quality control in this area. Yes, it’s made in India by TVS, but I think it’s unfair to claim that’s why this happened. What matters now is that it gets sorted for every customer around the world.

G310GS owner Roger Bickerstaffe from Kent bought his bike in April, and is now waiting for his to be reinforced (likely around the end of July). He hadn’t suffered any failure, but had seen talk of it on forums. He has an aftermarket centre-stand fitted, but while his dealer awaits the parts, he’s off the road.

Kevin Fairburn also owns one; “My 310GS comes under the recall, though like most I’m

still waiting for the parts to arrive. I'm in my dealership all the time, and along with the fact that news travels very fast over the internet, I found out pretty quickly. I still expect to receive an official recall notice from BMW in due course, but I'm not too concerned at the moment.

“I understand parts will be available in the next few weeks, and for now I'm taking that extra little bit of care when putting my bike on the stand. I do have crash bars fitted, though I'd prefer not to test them just yet.

“I'm still really pleased with my bike; I use it every day and it’s been 100% reliable to

date. It’s returning a steady 73mpg on my commute, which roughly cuts my fuel bill in half from the car. I also save about 15 minutes per journey on average, so the £65 per month I pay is well worth it.”

From my own point of view, this has made me look closely at the bike again, but I still maintain it’s a well-built machine. There are other niggles though – the rear wheel is an absolute pig to get back in – I’d not want to have to do it at the side of a dusty road half way around the world – and the front wheel’s a bit of a fiddle too. The tank cover needs an awful lot of bolts removing to get off, but yes, I do still like this bike a lot; if I didn’t I’d send it back – being loaned a review bike needn’t affect your integrity, and with two of my own, I’m not clinging onto this because I need the transport.

I’m eager to keep riding the little GS because it’s so good at what it does; as I write this, I’m getting ready for two days of trail riding, so we’ll see just how tough this thing is… 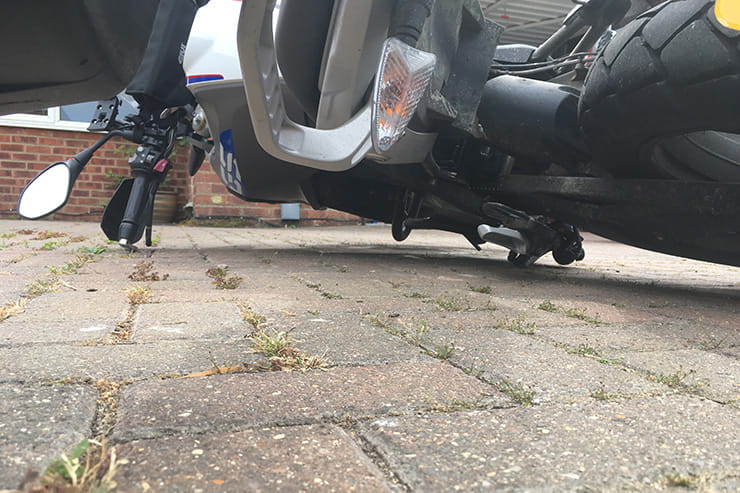 • There’s very little damage when it falls over

• BMW is sorting the issue quickly

• Disappointing to have a failure on such a simple part

• The rear wheel is a pig to replace

• Slight doubts creep in about reliability, but I’m still confident 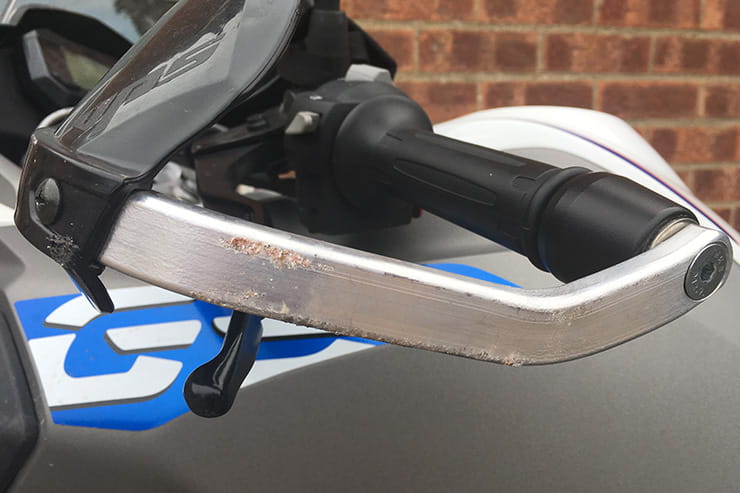