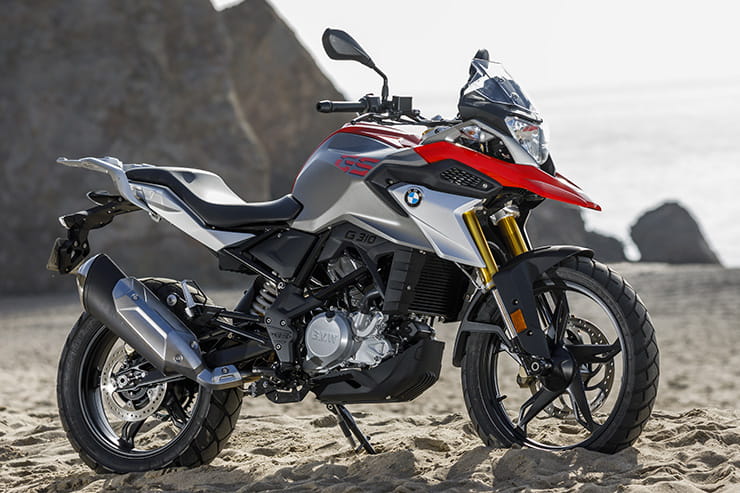 “Waste of money.” That’s what one pundit wrote when I posted a quick walk-around video of BMW’s new G310GS on our Facebook page. His argument was that the 310 isn’t a ‘proper’ bike, and anyone over 21 who’s passed their test should only buy a motorcycle with an engine bigger than 600cc… 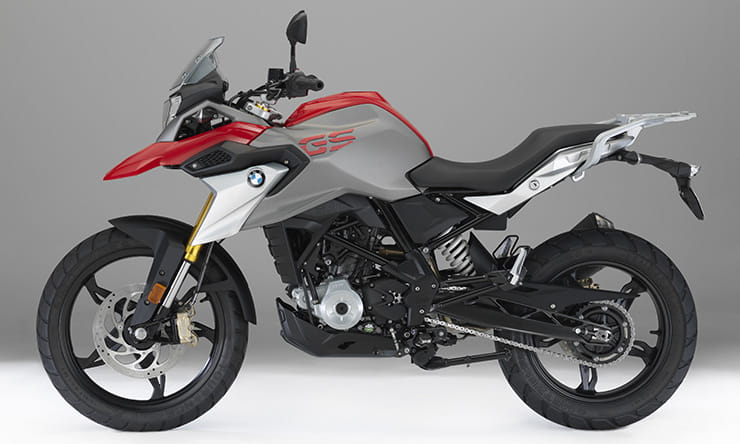 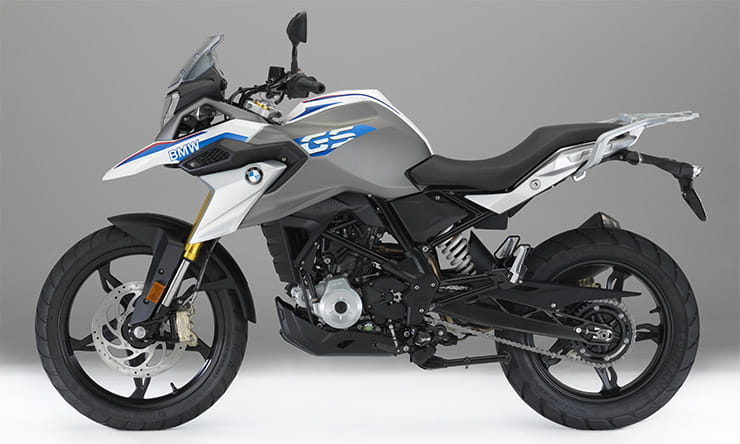 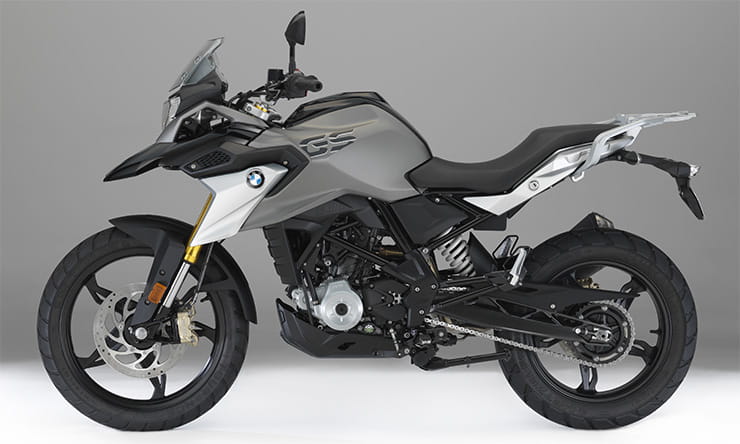 If we’re going to work out if this bike is worthless, then let’s take a look at some figures: The engine, for a start, has 50% of the R1200GS’ cylinders, and – at 313cc – 26% of the capacity. That motor’s interesting though, because it has a reversed cylinder, the exhaust coming out of the rear and the intake going straight into the front. This helps lower the bike’s centre of gravity, and put a bit more weight over the front. It also allows the beemer to be more compact – the 1420mm wheelbase is 94% the length of the R1200GS, despite the quality, cast aluminium swing-arm being as long as possible for better stability in such a small, light package. 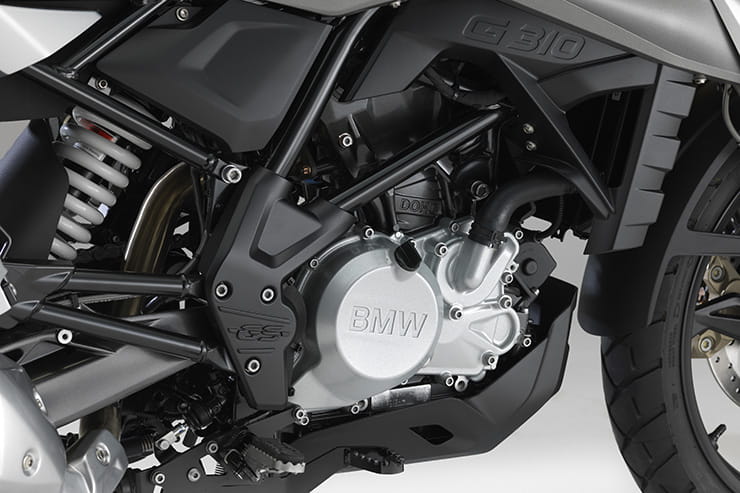 The cylinder is reversed, with the exhaust exiting the rear

It’s also not as wide – 880mm, which is 92% of its big brother. That ties with the fact that BMW doesn’t offer any panniers for the bike. There are two top boxes available (and a tank bag), but the biggest is only 30litres. That made me concerned that this might be a machine with no carrying capacity, but I’m fairly confident we’ll see some larger aftermarket luggage soon; including rider and pillion, the G310GS can carry 175.5kg (28 stone). That’s 75% of the 234kg that the 1200 can lug, but still leaves about 30kg to play with if I take my wife with me. Remember that manufacturers have to work to the worst-casescenario, so might limit the luggage a machine can officially carry.

Still, at only 169.5kg (with fuel), this little thing is 70% of the weight of the 1200, and while the 835mm seat (there are 820mm and 850mm options available) is only 2% lower than the big one, if feels far less; I’m 5’10” with a 32” inside leg and could easily put both feet flat on the floor. That’s a big plus for me when riding off-road, as is the diminutive weight – when things go wrong (and they did), this is a really easy bike to move about, whether off the bike or on it, thanks to a very tight turning circle. So great for cities too.

You’ll not be able to bolt on quite so many LEDs, heaters and other electrical gizmos as you would on the flagship due to the 330W alternator offering 65% of the output. Still, it’s not bad for an engine that has about a quarter of the grunt.

It’s 149% as economical as the 1200. That’s according to standardised figures – BMW claims that little G will cover 85 miles per gallon, which would give the tank a theoretical range of 206 miles. That’s 82% of big G’s 251, but it’s not what I got – I managed 62mpg on the launch (150 miles to empty), but a large amount of that was riding off-road, lots of stop-start, and an awful lot of thrashing. On the tarmac to our first dirt section I was holding the bike in a low gear deliberately, and rolling on at full throttle to get a feel for the motor; then I managed 71mpg, so I have no doubt that 180-200 miles would be fairly easily achievable with more normal riding. 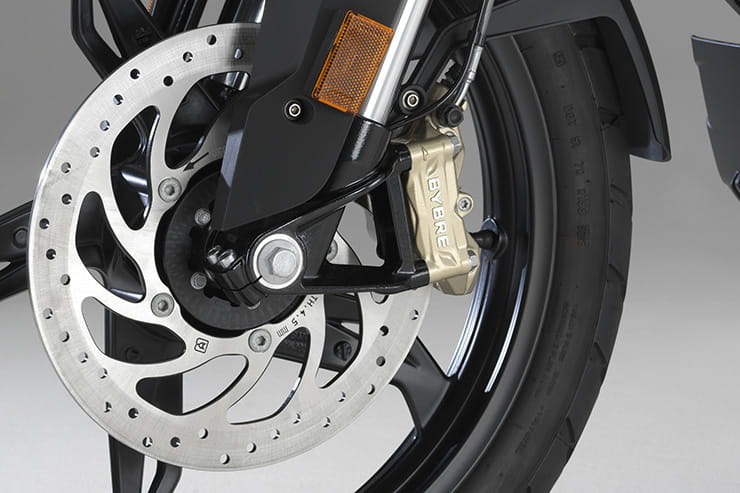 There’s less than 50% of the braking on the front of this bike compared to its sibling: just one 300mm solid disc and a single four-pot radially-mounted Bybre (BY BREmbo) caliper, but it’s more than strong enough for such a light machine. There’s a lot of dive when you slow down – the unadjustable 41mm forks and preload-adjustable single shock are a good compromise between road and off-road, soaking up the harshest bumps, pot-holes and rocks, but giving plenty of feedback. 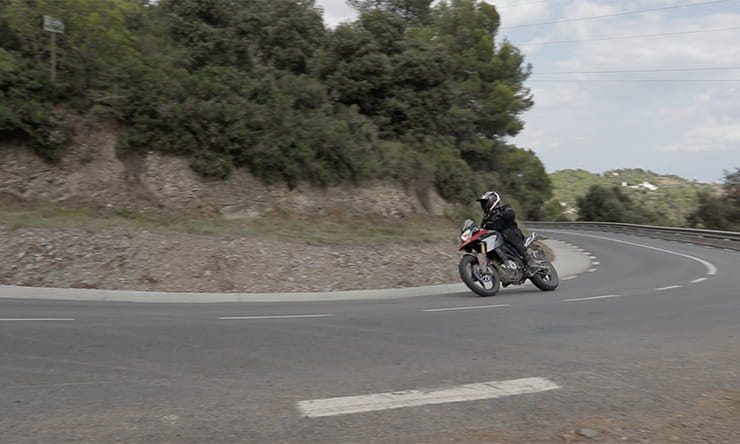 Metzeler Toruance tyres are a quality compromise for every surface

The Metzeler Tourance tyres (no cheap rubber for this bike) are a compromise too – they’re good off-road, good in the wet and good in the dry, but exceptional in none. When they do let go though, which I had in every situation, they’re extremely progressive, and don’t feel like they’re going to spit you off unless you push much too hard. On dry, twisting mountain tarmac they’re not sports rubber, but they only put the wind up me when I caught a notoriously slippery Spanish white line. 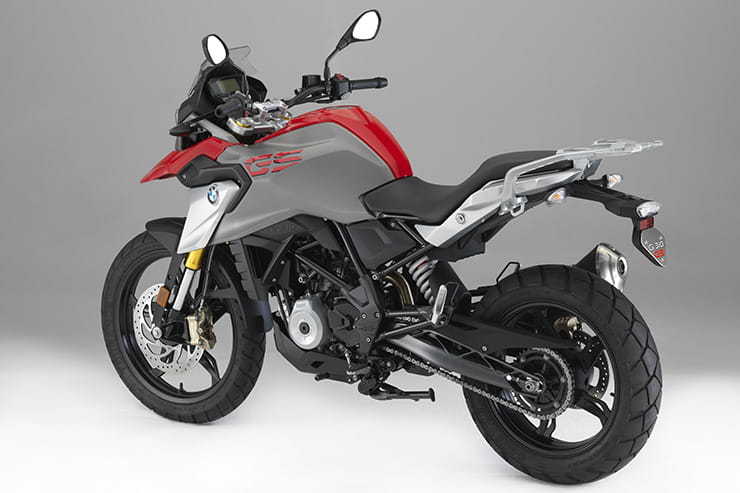 Yes, it’s made in India

The G310GS is made just outside Bangalore by the TVS Motor Company, India’s third largest motorcycle manufacturer. BMW has contracted the company to build this bike in its own dedicated and sealed production area, with Bavarian staff keeping a very close eye on the quality control. There are automated systems direct from Germany being used to build and check every part.

Sounds good, but what matters is that the motorcycle really does look the part – this is no cheap machine with a BMW badge stuck on it. From the high quality plastics, to the deep finish on the steel trellis frame, it looks solid and well put together. The clocks too, while looking a little bit tacked onto the front fairing, mimic the top-end BMWs, and offer all you’d expect – revs, speed, odo, two trips, engine temperature, fuel level, range, average and current consumption, average speed and time. There’s a rev light for when you approach the 11,000rpm limiter, but being small and white, it’s not that noticeable. 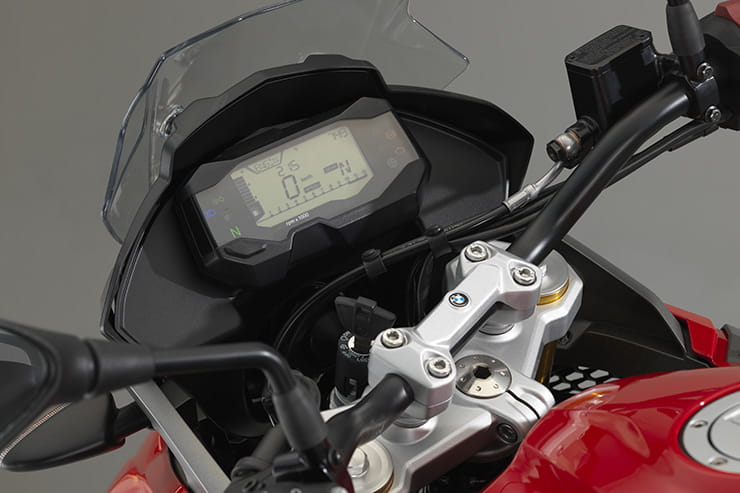 The same can be said for the ABS warning light – it’s not that bright, which might be a worry if you forget you’ve turned it off by pressing and holding the bar-mounted button (you can do this when you’re riding), but it resets to on every time you switch the bike off. I know you’re supposed to turn off ABS when riding off-road, and I did when I remembered, but the system works well enough that it wasn’t a problem for me when I forgot.

No, it’s not a faux off-roader

I’m not a confident rider when I leave the tarmac. I’ve done some courses, and I own a KTM 1050 Adventure, but that’s too heavy for me to feel happy taking on anything too slippery. But this, with its easy handling and tiny stature changes things. This makes me want to explore, so when we were told we had a lengthy section of off-road ahead of us, I wasn’t quite as terrified as I normally am.

There’s more than enough go in this bike to fire it up any incline. You might need a few more revs even on road (I certainly stalled it plenty of times before getting into the rhythm of a reduced capacity), but there’s plenty to kick the back out if you’re feeling like it.

Lightweight cast aluminium wheels it might have, but they took the punishment of our rocky track without any problems, the soft suspension really coming into its own as we scrabbled through the tracks near Montserrat. After a few laps of the olive-tree lined lanes I was feeling like an off-road hero. No doubt those seeing me wouldn’t be that impressed, but I felt like I was really working the bike. 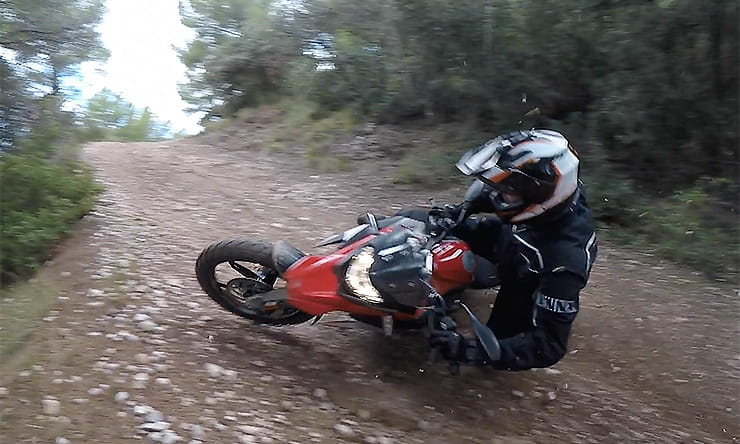 Despite being crashed, the BMW G310GS came away with very little damage

Then videographer Rich asked for “just one more pass by the tree.” And I crashed. I hurt my knee and my pride, but the bike came off incredibly well. In fact, despite washing out, slamming down on a surface of sand, gravel and rocks, and spinning through 180°, the only visible damage was a scuff to the rear luggage frame and the bar-end. The wide pillion grab rails had kept everything off the ground, with no damage to the bodywork or swing-arm. If I’d gone down on the right hand side, I’m sure the exhaust would have been scuffed, but that’s it. Riding afterwards, it was clear the forks had twisted slightly in the yokes, putting the bars a little offset, but that’s an easy fix by slackening them off for it to all snap back into place.

If you ride off road, there’s an increased chance you’re going to fall off, but the little BMW stands up to it well. It’s not a motocrosser, but certainly at my level, it’s 100% as capable as the R1200GS, and 300% as inviting to take off the beaten track. 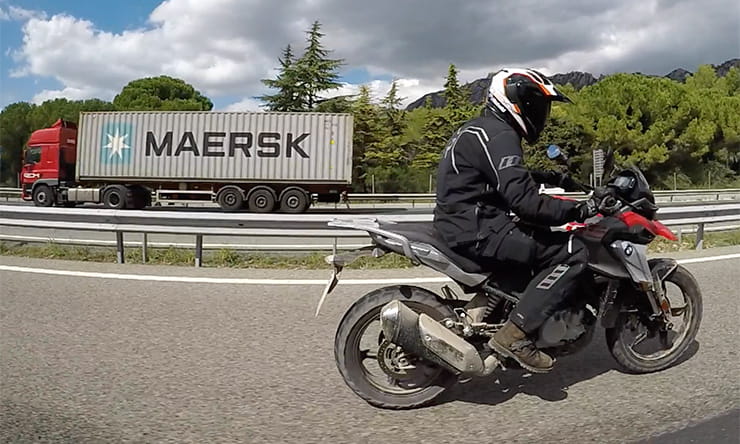 The seat’s comfortable and wind protection great, though there are some vibes on the motorway

At 75mph, the little single is spinning at about 7000rpm. It’s a bit vibey through the pegs and the otherwise comfortable seat, but you don’t tend to notice it all the time, and the wind protection from that small screen is very good, certainly for my average height.

If firing down a motorway is your thing, then you’ll no doubt prefer something a bit bigger, but where’s the fun in that? When I rode down to Spain last year I took back roads all the way, and that for me is what makes motorcycles so rewarding. Do that (or take the motorways if you must) and the G310GS will easily take you anywhere.

On twisty mountain roads you’ll have to work the engine as it only comes on song at 5000-6000rpm – below that it’s very weak – but from there to the limiter it’s always engaging. Sure, a larger engine would let you leave it in third, but if you want to really feel involved with a bike, this BMW will do it. 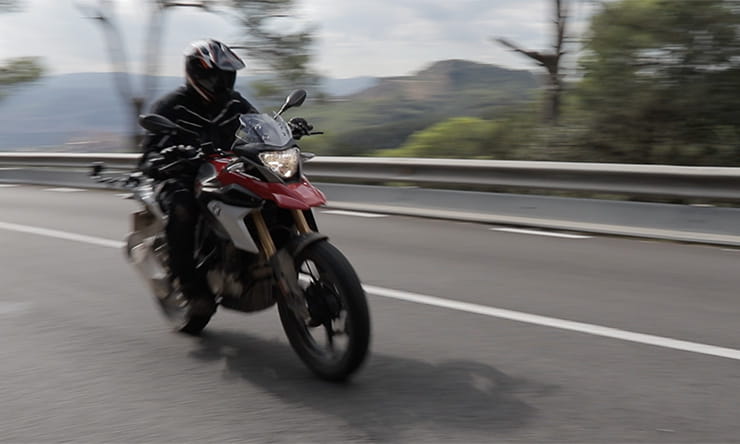 Unlike other BMWs, there will be no factory-fitted options – besides the unconfirmed possibility of a second version (our money would be on a more expensive Adventure model with spoked wheels) – as shipping time from India would be two to three months; all the accessories, like heated grips, LED indicators and 12V socket will be bolted on by your dealer.

Contracting out the build of the G310GS makes geographical sense when you consider that the biggest markets will be Asia and latin America. But of course it’s allowed the company to build something that the more wealthy countries can also enjoy, and while details like non-adjustable levers hint at a budget-conscious construction, others show real thought, like the mud-guard over the shock and the braided brake lines. The machine’s project leader told me that avoiding plain rubber lines gives much better feel to the brakes, but also more control in the ABS system, as it’s not needing to cope with a constantly changing pathway diameter. It worked for me.

Money was saved on parts like the 300mm disc – at this size, any runout from the wheel’s facing will have a minimal impact, so a floating part that costs twice as much isn’t needed. And performance wise, it was absolutely the right choice.

Given that I was able to do so much with this bike during the day – to cover so many road surfaces, and to use so much of its available performance – I’d say it’s absolutely worth every penny. It’s not for everyone, but those who want something smaller, lighter, more engaging yet generally just as capable, should definitely consider this newest addition to the GS stable.