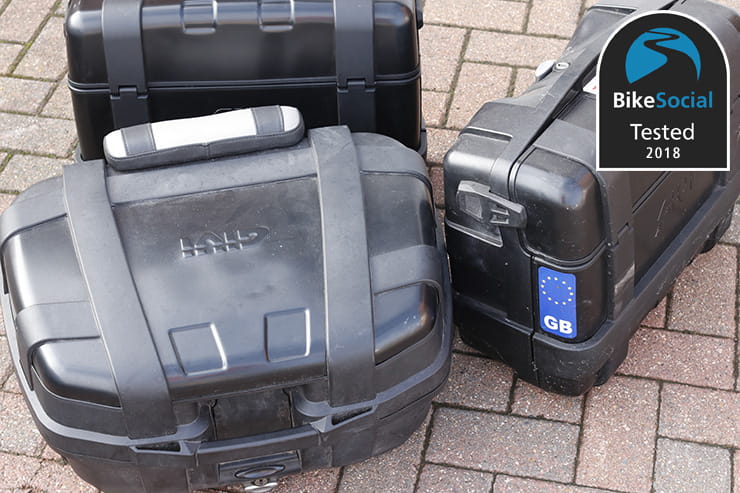 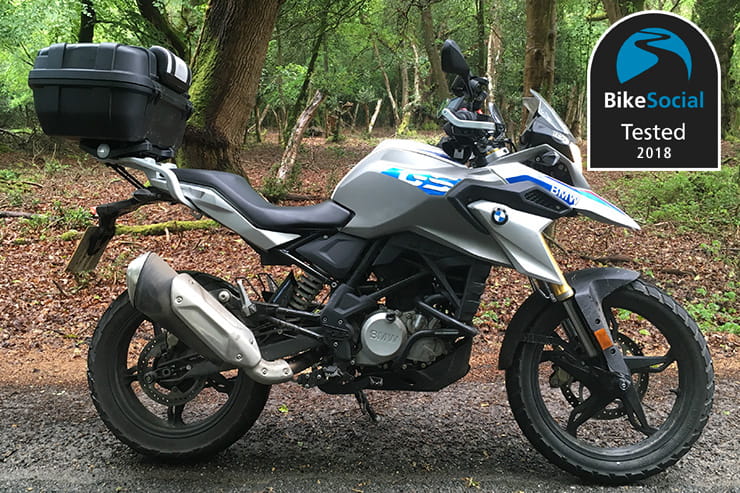 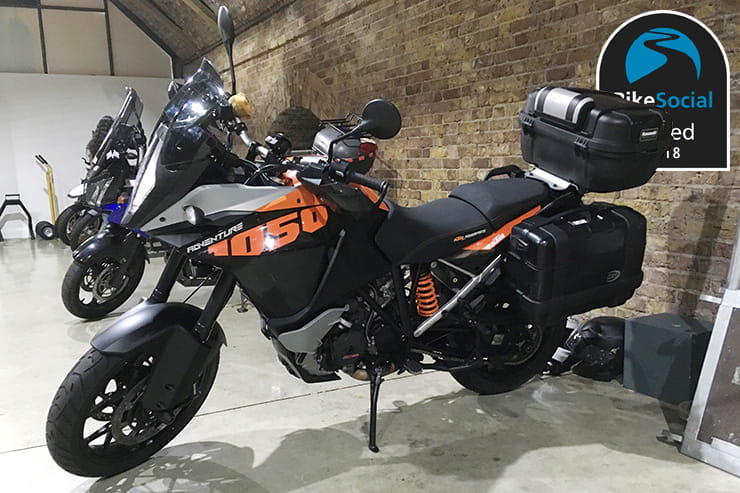 There are two main schools of thought when it comes to luggage – hard for security or soft for safety.

Serious off-road adventure riders will often opt for soft luggage as it can’t crack in a crash, and if you get trapped underneath it, you’re less likely to be hurt. While this still matters to road riders, it’s less of a consideration, and it’s hard kit I use most on my road bikes.

I’ve fitted various pieces of Givi equipment to my motorcycles, right from my early CBR600s, but it was while running a long-term-test Kawasaki Versys 650 that I bolted on a set of Givi Trekker kit. That was four years ago, and it’s moved with me through a KTM 1050 Adventure, BMW G310GS and next a Yamaha MT-10…

There’s a thin aluminium cover on the outside face of the Trekker boxes, but the rest of the construction is glass-fibre-reinforced polymer. Finished in black with a slightly cheaper silver option available, it’s very tough without being brittle, though the aluminium front does hold small dents. While I fortunately haven’t crashed with them on, I have lost my balance and fallen onto a car. That cost me a Vauxhall tail light, but needless to say, the Trekker that did the damage was unharmed.

The top-case I have weighs 5.5kg, while the two panniers each weigh 5.4kg. 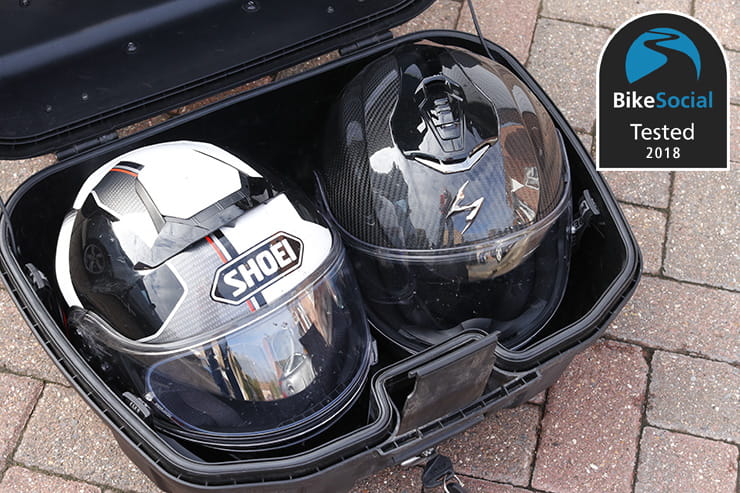 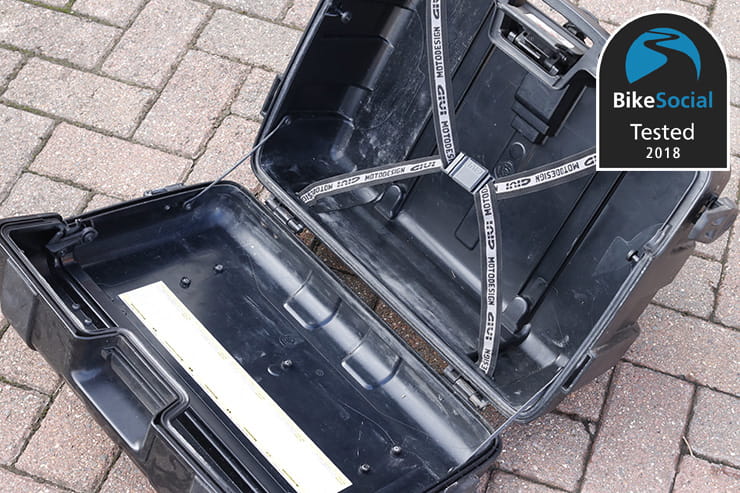 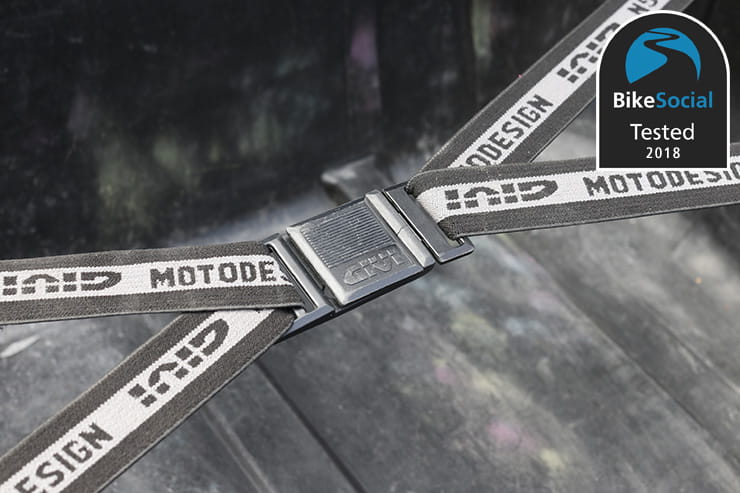 The top-box easily swallows two full-face lids, while the 33litre panniers have space for plenty of gear

The 52litre top-box easily swallows two full-face lids, plus other bits and pieces tucked around the sides.

There are 46litre side cases available, but I’ve got the slimmer 33litre models – these have the advantage of not adding too much bulk to the bike, so you can filter. On the Versys 650, with its underslung exhaust, I could have the top box and panniers both fitted without limiting my ability to cut through London city-centre traffic.

These smaller panniers won’t take a helmet, but they still offer bags of space for the rest of your kit. My wife and I like to go away for a day on the bike, and travel with the luggage empty bar a change of clothes – when we reach our destination, the Givi kit acts as a security locker for our helmets, boots and trousers.

On the Versys 650, I spent a week away with my mates in Ireland, and had plenty of room for all my gear, without having to add a tank bag.

When I had the kit fitted to my KTM 1050 Adventure, the high-level exhaust pushed the right-hand-side pannier mounting bracket outwards, which meant I couldn’t get through some tighter gaps; if I didn’t need all the storage, I’d often just run the top-box and the left-hand pannier; the bike felt fine.

On the G310GS, I only ever used the top-box bracket, though Givi does also offer a full pannier system for this. While the top-box brackets often state a maximum load of 6-8kg, I’ll admit to exceeding that by a long way. I’m not condoning or recommending it, but even with the 52liter case crammed and difficult to lift, it was stable on the bike and didn’t noticeably affect the handling of even something as light as the 169.5kg BMW. Be sensible – weight limits are there to ensure the structural integrity of your bike’s sub-frame, the stability of your motorcycle and the security of the luggage. 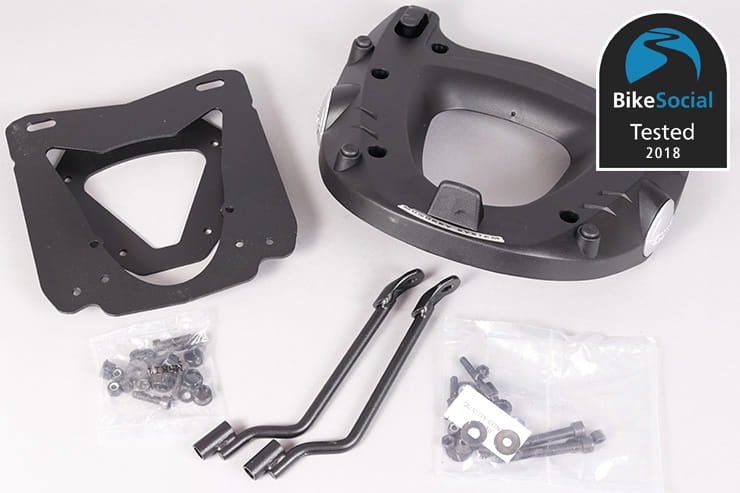 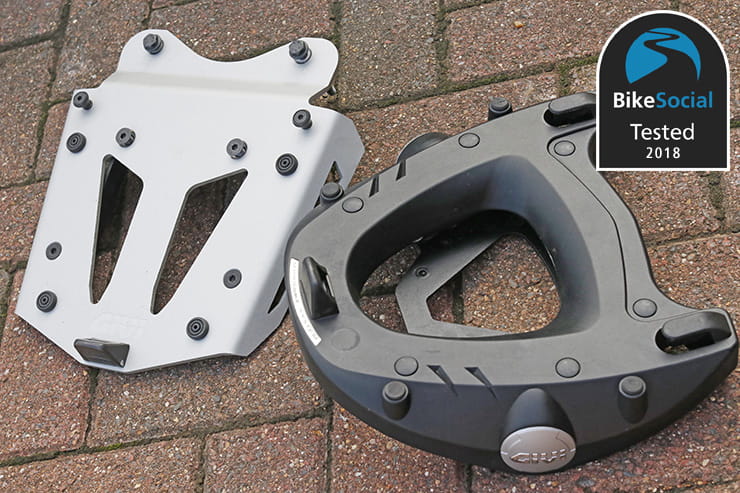 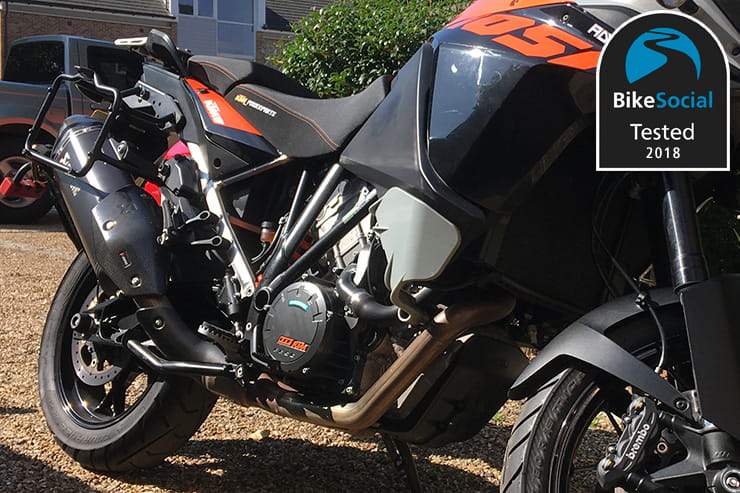 The type of mounting kit you need will vary by bike, but for many you have a choice of top-case mounting plate designs

I’ve used both the standard pannier rails and the quick release system (not available for every bike), which allows you to rapidly remove the tubular frame, leaving only subtle mounting points in place on the bike. I had this on the KTM 1050 Adventure – when I didn’t need to carry anything, I could get the bike back to its clean lines. Of course, the pannier rails can add a little crash protection to your bike, potentially protecting the machine from scuffs, so you might not want to be able to remove them – it’s your call.

The top-box mounts to a plate, which then fits to a bike-specific rack. These plates are typically plastic, but on the KTM I had the very neat aluminium plate, which looked great against the bike, and also had useful slots for strapping items to if you didn’t need to use the case.

Popping the boxes on and off the racks couldn’t be easier – locate the pegs at the rear, then push the case down onto the latch. The only thing to be aware of is that one or two of the rubber bumpers that keep the case tightly in place can, over time, occasionally become loose and fall out. Replacements are readily available, but they really are important; expect to pay £2-£3 for a pack of four.

When I fit the kit to the MT-10 Tourer later this year, I intend to only use a top box as this model already has its own soft panniers. The bike is black, so I hope to use the new black aluminium mounting plate, which will look sleeker and more in keeping with the design of the machine.

Yamaha says the bike accepts panniers or top-box, but you should be able to use both as long as you’re sensible. I’ll explain the fitting process in a future review... 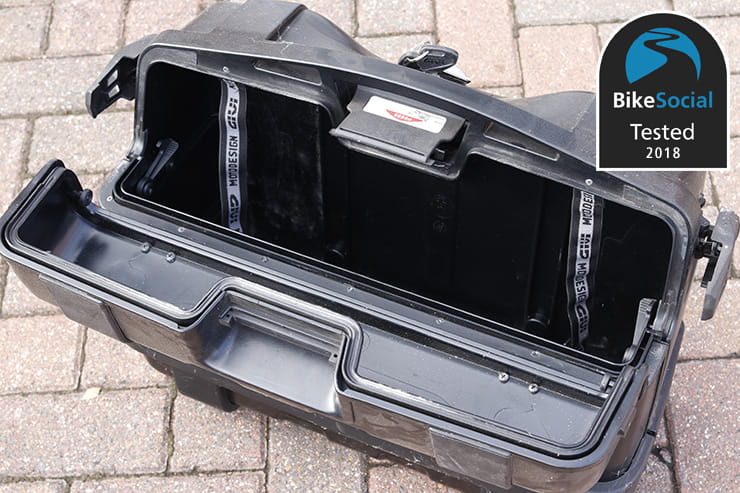 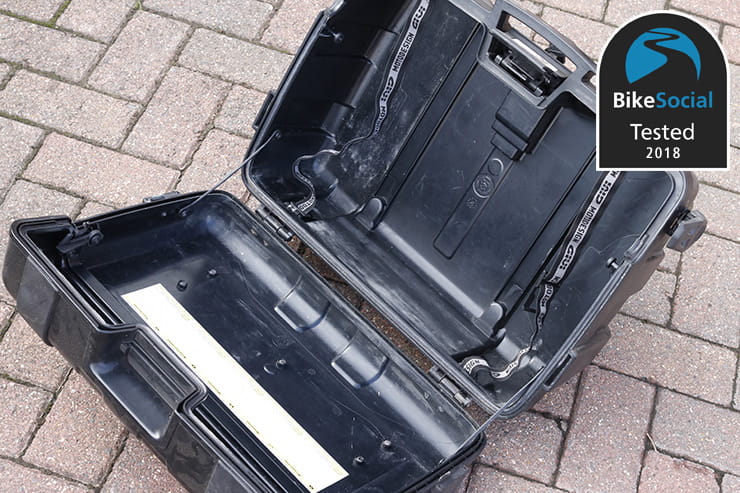 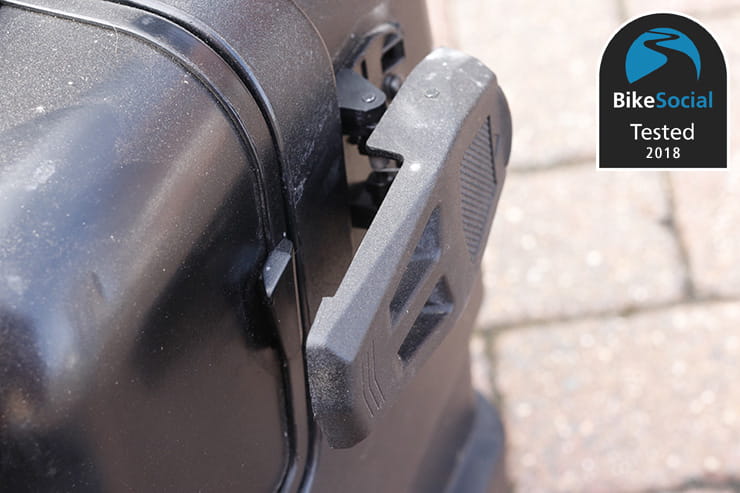 The panniers can be opened fully, or just at the top. Access is more restricted than on a pannier that only opens at the top, but it’s an excellent compromise

The top-case and panniers have elastic straps that cross the interior to keep your gear in as you open them up. While the top-box simply swings open, the panniers have a very clever design; they can be opened just at the top, to allow access to the bits you need while out on a ride, or by releasing two latches the whole front can be swung open. A clever alternative to cases that open only on the top edge, or jettison all your gear when you try to open them while fitted.

I’ve got the optional £48.80 backrest on the top-box; it’s not cheap, but makes all the difference for my wife as pillion. She much prefers long journeys when there’s a top-box fitted, and with the backrest on I’ve known her twice fall asleep on the way home… 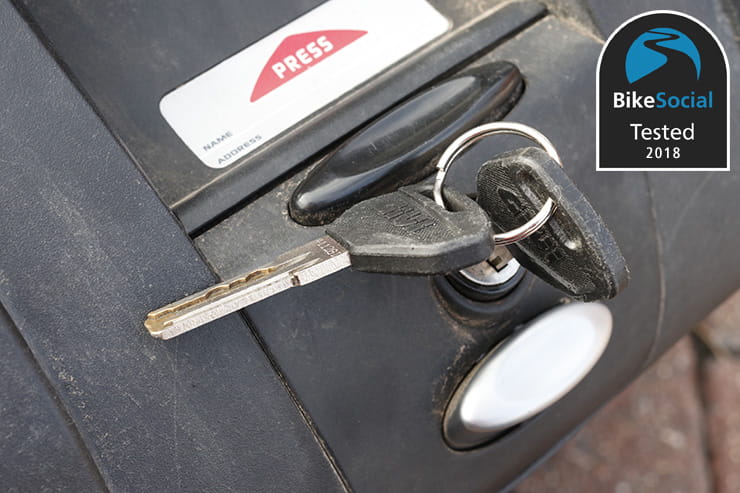 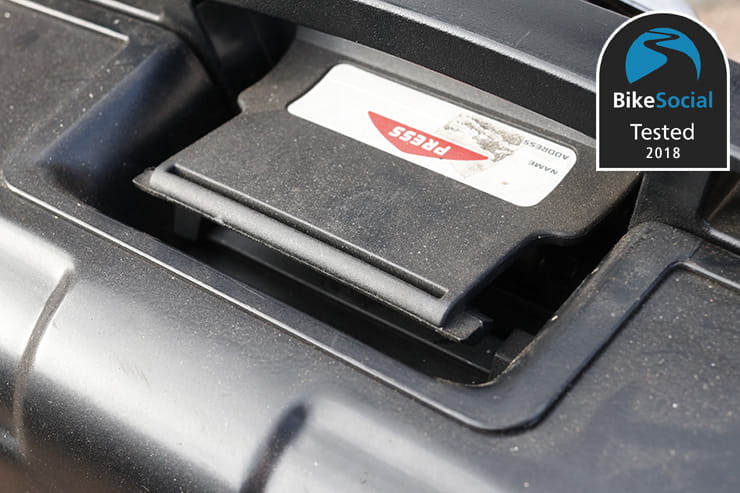 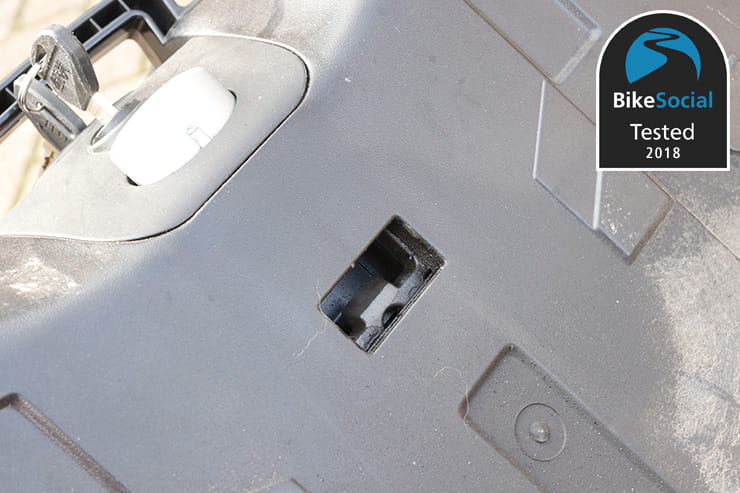 Even in the most torrential of rain storms, I’ve not seen any water find its way past the efficient seals built into the Givi Trekker top-case or panniers.

Most Givi boxes, the Trekkers included, are Monokey-equipped, which means the same keyway opens the case as is used to unlock and remove it. There are two buttons on the case – one releases the lid retaining catch, while the other unlocks the case. You can’t leave either unlocked without removing the keys, and I’ve never had a case not be located securely; a mate with a cheap, unbranded copy once saw his bounce down the road behind him.

When buying, make sure you speak to your dealer about getting all the lock barrels the same, so you don’t have to carry three separate keys; the triple key and barrel set costs £42. 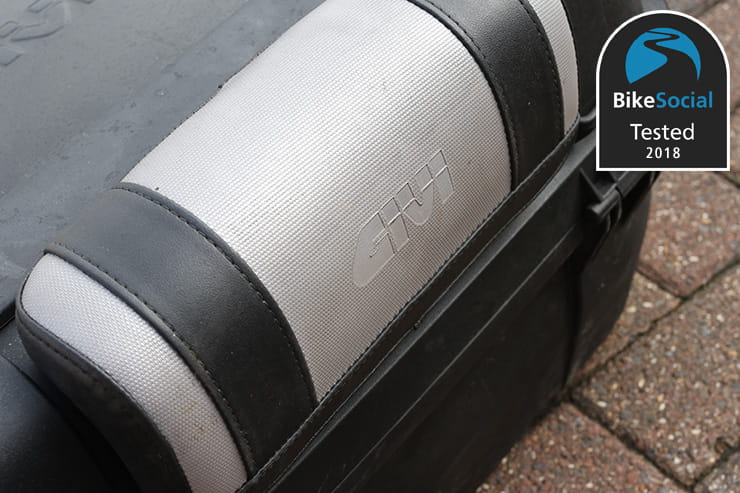 The backrest is an optional extra that my pillion swears by

However much you shop around, and whatever deal you find, there’s no avoiding the fact that this is a sizeable outlay, but it’s solid kit that will last a very, very long time.

Buy decent luggage, and when you sell your bike you can always sell the luggage racks separately, then put the money into the £250-£300 you’ll need for the racks on your new bike. If you tour, or need to carry a fair bit on your commute, once you’ve made the initial outlay, Givi luggage should prove a very worthwhile investment.