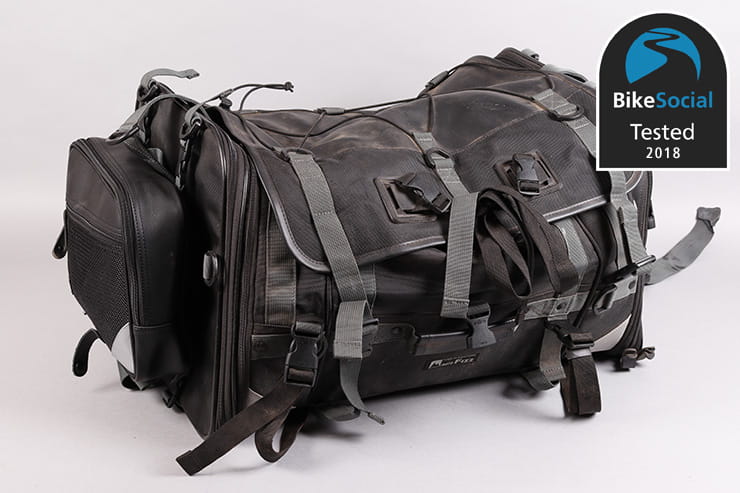 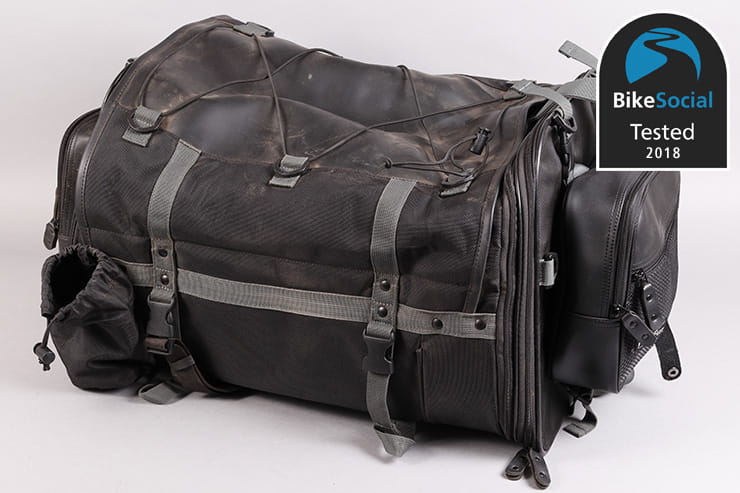 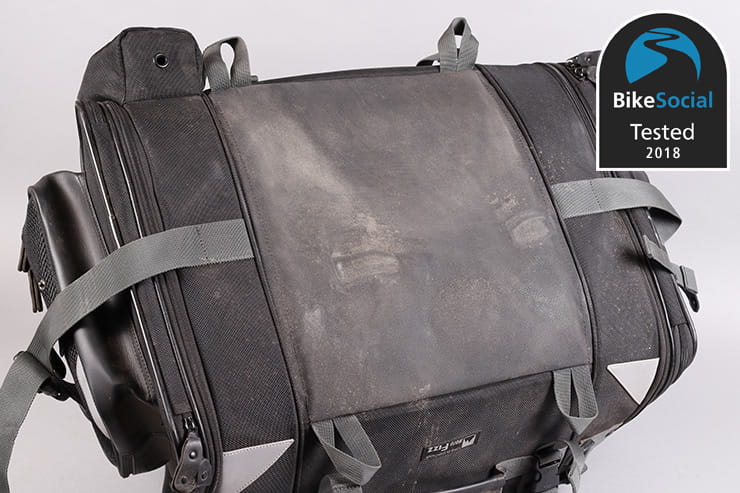 The Japanese Moto Fizz Camping Seat bag is designed to allow you to carry everything you need for a substantial trip away on pretty well any bike; I put it to the test with two very full days of trail riding and camping on a BMW G310GS.

As I loaded it up at the start of the off-road adventure, the other – more experienced – trail riders were mocking me, placing bets on how long it’d be before it fell off, but we were set to cover a very long distance over some tough terrain, so it’d be a thorough initial assessment of the bag’s performance…

This thing is tough. It’s made of extremely heavy-duty nylon (1680 denier PVC-lined over the majority), with some synthetic leather sections. The night before our big trip, I loaded it up with a massive 29kg of tent, sleeping bag, clothes, camera kit, beer, coke and a set of one-piece race leathers (don’t ask) – I strapped it down extremely tightly, pulling hard on the built-in straps, but with that, and crashing over the byways of eastern England (though without the beer, coke or leathers), there are no signs at all of any wear or damage.

Only two parts suffered – I didn’t tuck one piece of excess strap away properly, so the end got melted on the exhaust. More annoyingly, the night before riding I took the bag off and didn’t bother clipping the straps that are left on the bike out of the way with the supplied cross-piece. I forgot I’d done this, then rode off – one of the straps dropped into the chain and got cut, so I had to use a Rok Strap in its place. This was entirely my fault, but fortunately Nippy Normans can supply replacements for £12; I bought mine as soon as I got home.

Empty, the bag weighs just 3.86kg – considering how strong it is, and what it can carry, that’s impressive. 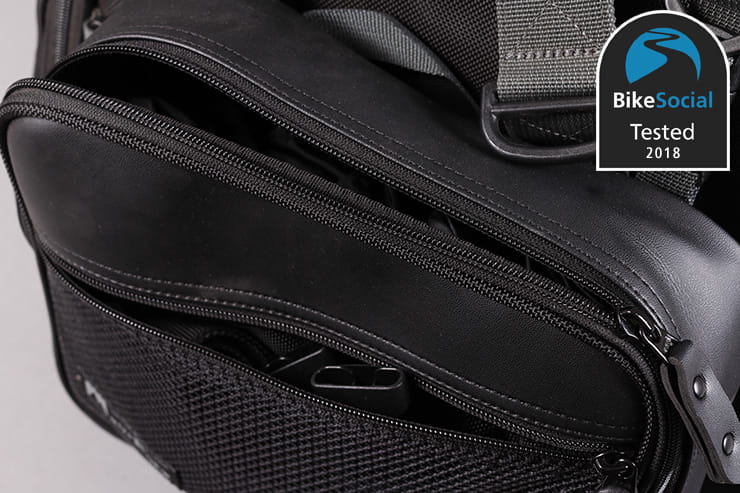 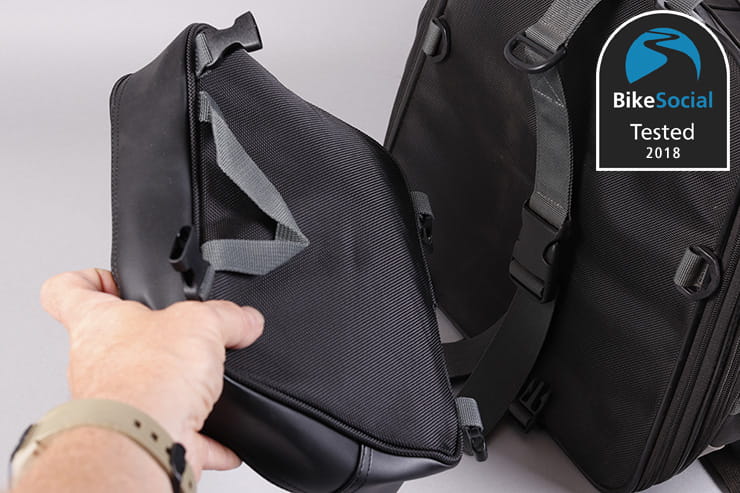 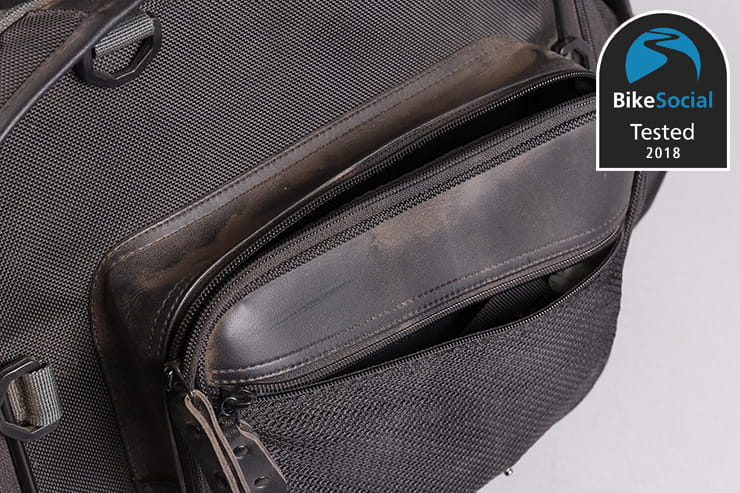 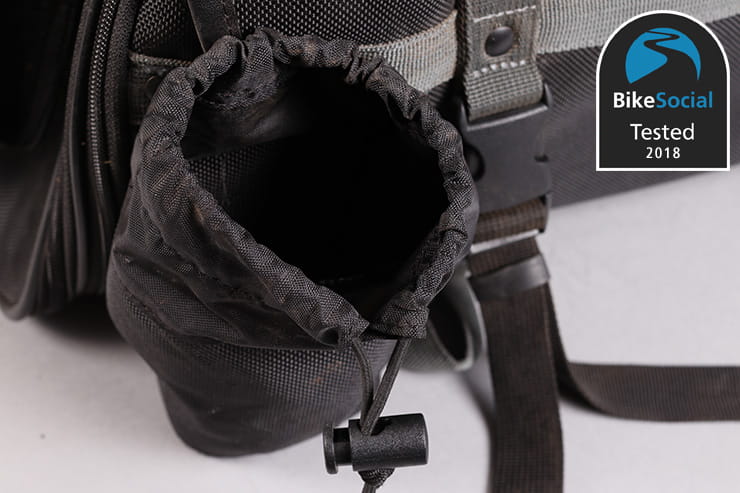 There are plenty of external pockets around the Moto Fizz

The Moto Fizz expands from a big 59 litres to a huge 75 litres; you can expand either side or both together. There’s also a bungie net on the top, a large drawstring pocket below the top flap, a fixed pouch with extra pocket on one side and a removable one on the other. There’s a drawstring bottle pouch on the front (so within reach as you ride) and a pair of straps for a roll mat or similar on the top flap.

Inside the main compartment, two adjustable straps keep the bag in shape, and help keep your kit secure and organised. To get to this large area, you can lift the top flap and unzip a big door to access from above, or you can open up either end to get into the sides – these flaps are retained on straps so they don’t tumble open and spill your kit; they also act as soft working areas to leave small items while you sort yourself out. Oh, and there are mesh pockets inside those side flaps. 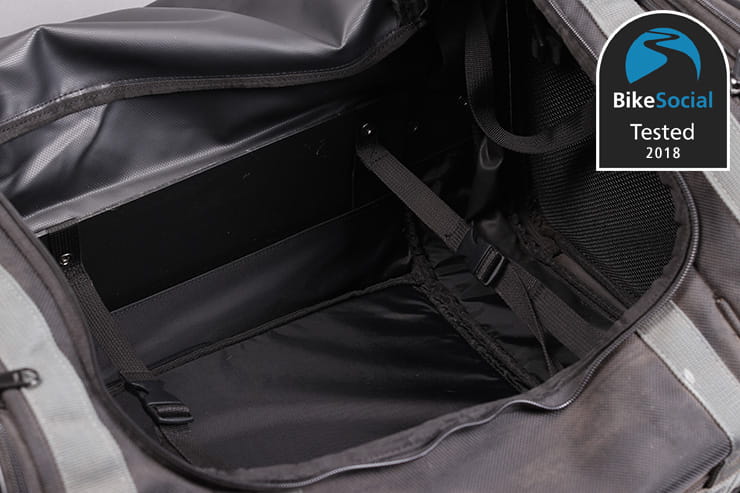 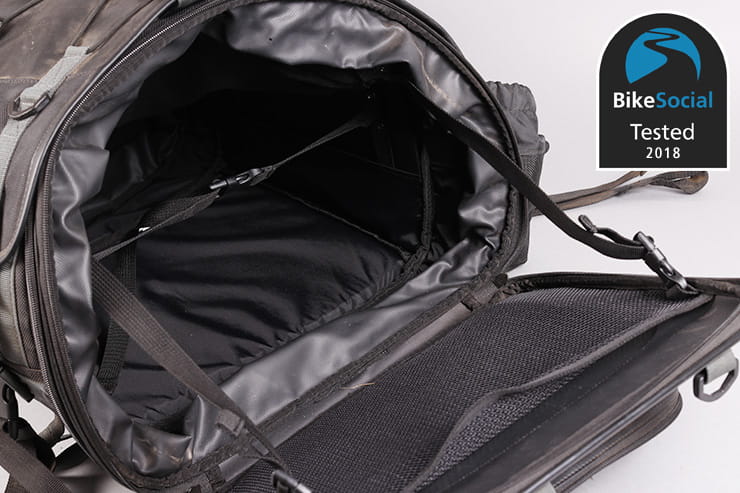 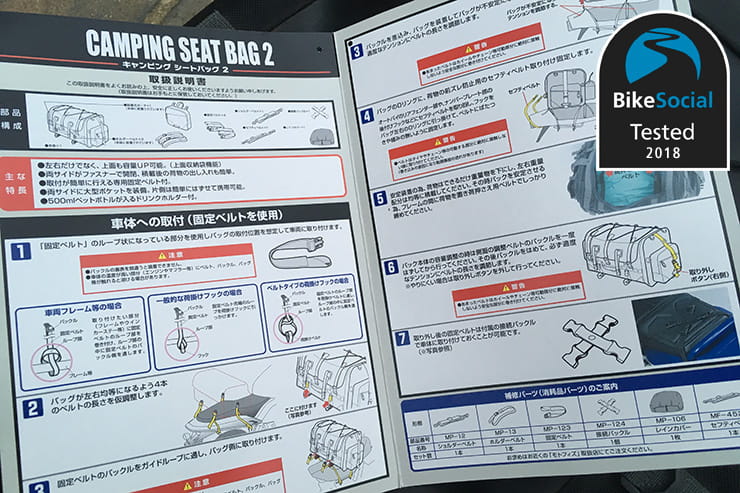 The main compartment can be accessed from the top or the sides. While the instructions are in Japanese, it’s not hard to work out what’s going on…

Four straps are supplied to tie the bag down with – each has a loop on one end and a strong plastic buckle clip at the other. Find secure points on the bike, wrap the loop end around and pass the straps through themselves, then clip onto the bag and pull the straps tight. Simple and very secure, thanks to the really strong construction.

The bottom of the bag has a soft, grippy base – as with all luggage like this, you do need to be careful of your paintwork, but take some time for the first fitting and protect anywhere that could rub. 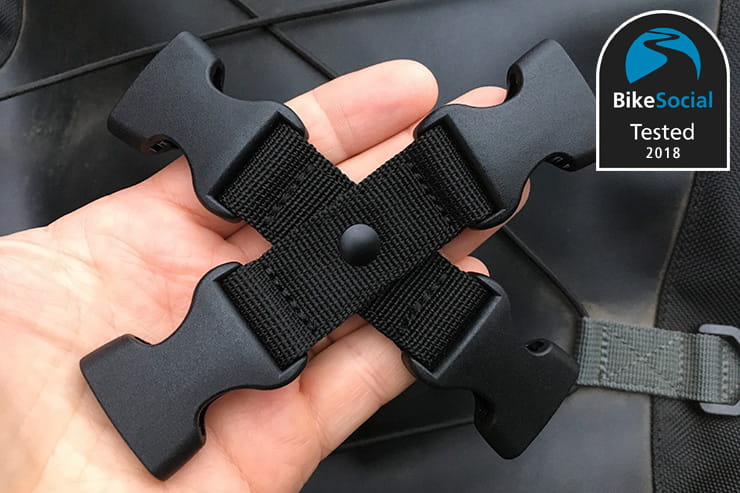 When you reach your destination, just unclip the four buckles and carry the bag away. The tie straps can be left on the bike, and a clever cross-piece with four female buckles is supplied – clip into this and the straps are held neatly against the seat, where they won’t dangle and fall into the chain.

On the G310GS the Moto Fizz covered the pillion seat and part of the luggage rack – on sport-touring machines for instance, you’ll likely find it rests on some of the tail – again, just make sure this is protected as any grit that gets between the bag and your paintwork will rub. 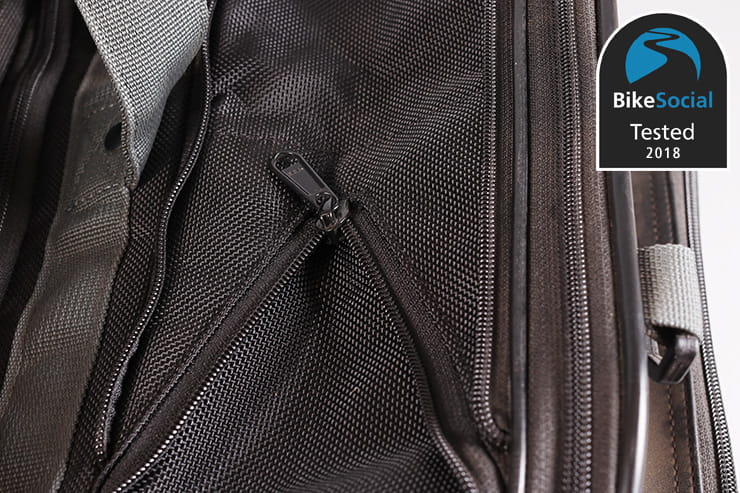 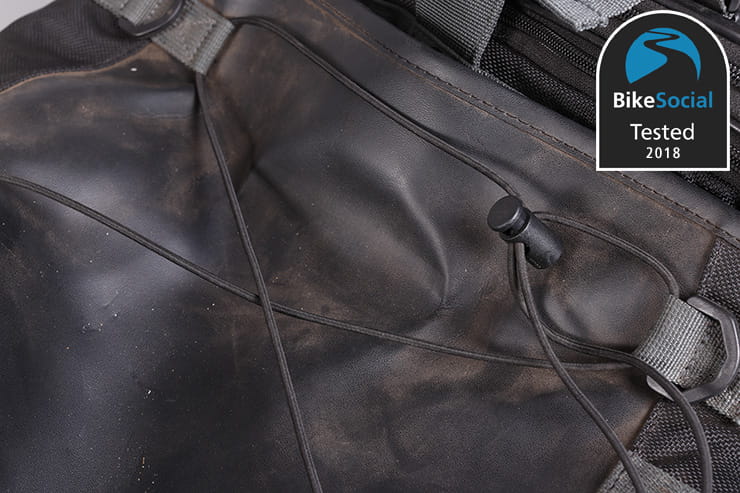 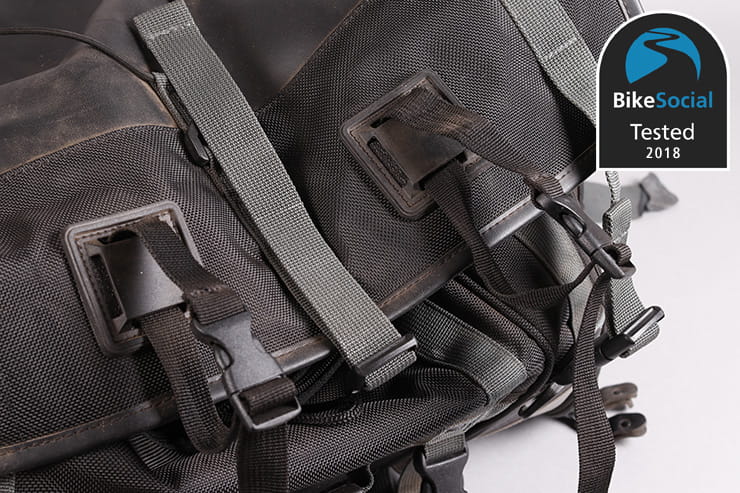 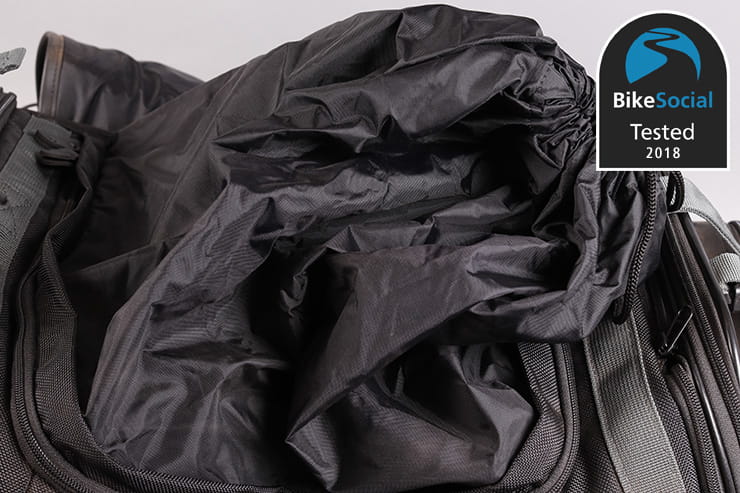 The Moto Fizz Camping Seat Bag can expand significantly, and also has a bungee net on the top, straps for a roll mat or similar, and a drawstring pouch under the main flap

This really is such a brilliant design – with the huge (and expandable) main compartment, as well as the extra pockets and strapping areas, it’s hard to imagine how you could need any more. The zips are proving tough, and large tags make them easy to get open. 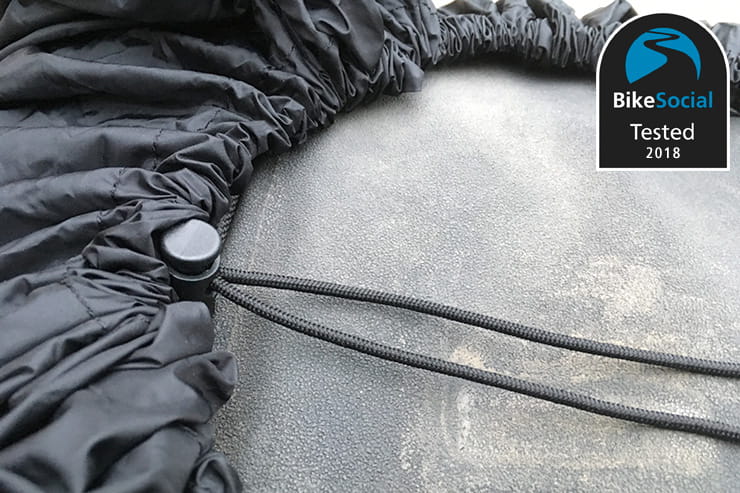 The waterproof cover can be pulled tight around the bag, whether it’s expanded or not (shown here from below)

A waterproof drawstring cover is supplied to go over the bag – without it you will eventually start to see rain drive into the zips, but a quick shower is fine. Careful packing will see most of your gear safe if you do get caught out, but if the rain’s really heavy, just pop the cover over.

If you’re leaving your bike, you’ll need to take the bag with you, but the clever design makes it very quick and simple. When clipping the four buckles back on, you’ll likely have to loosen the straps then tighten them up again to ensure the bag is good and secure, but it really does take just seconds. Just make sure you use that cross-piece if there’s the slightest chance you’ll be riding the bike without the bag fitted, to avoid losing a strap! 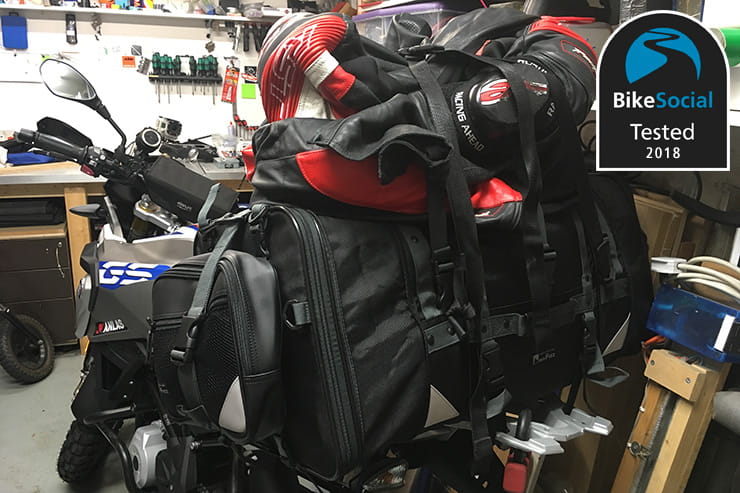 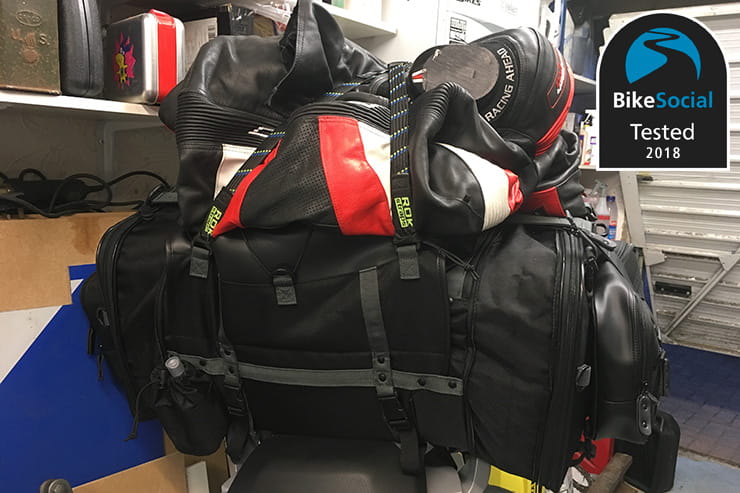 I really loaded the bag up on one trip, but it still coped admirably – that’s 29kg!

This is not an off-road-rider’s bag – for that, you ideally want to get any weight as low as possible and keep the back seat clear to allow you to shift your own body mass well back; there are products – like the £375 Giant Loop Great Basin Saddlebag – built specifically for trail riding that can do that. Having said that, while the Moto Fizz is designed primarily for road-touring, it coped with everything I – and others ­– threw at it. And those who initially mocked it had to admit that it worked brilliantly.

A closer look at the Moto Fizz bag