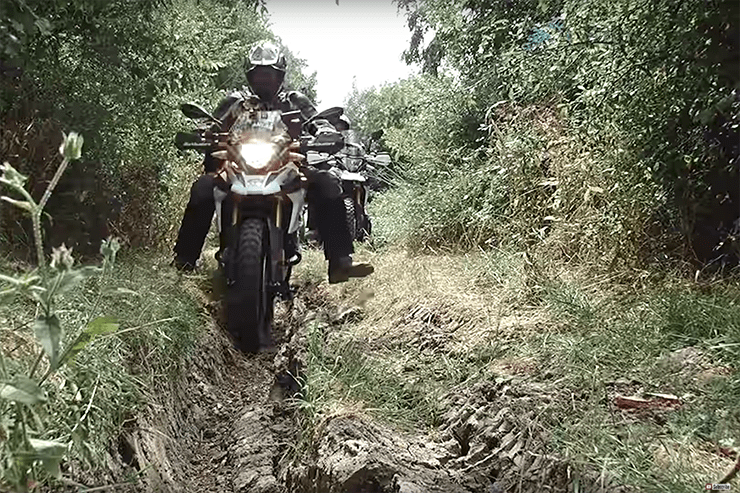 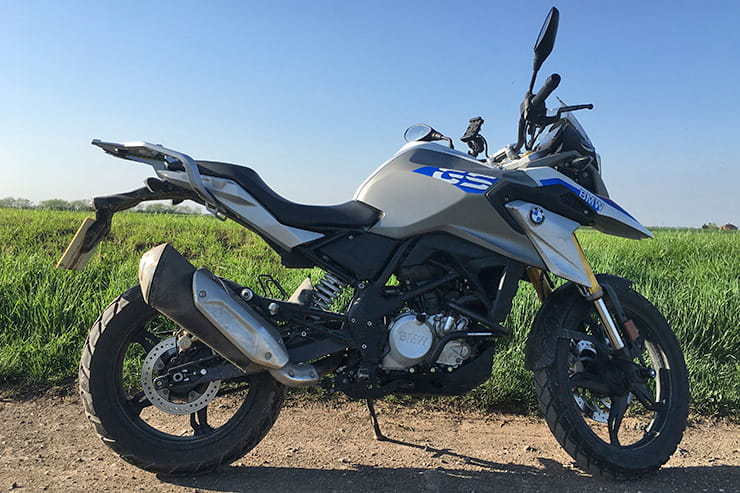 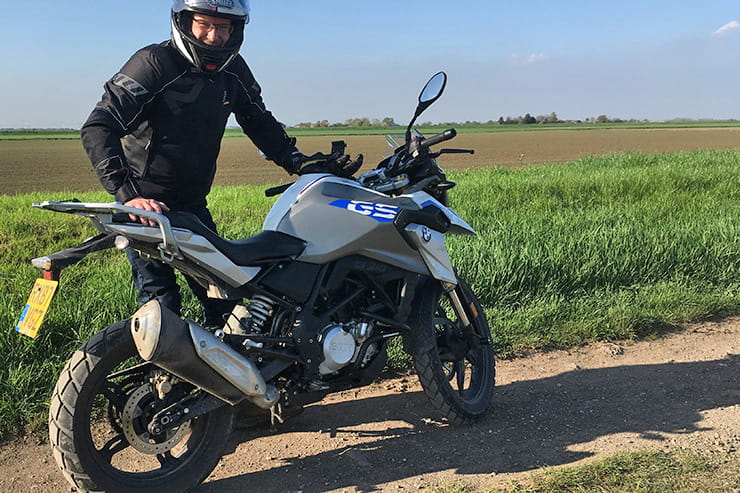 Ruts can go f@*k themselves. And so can sand.

I’m not a great off-road rider, and after spending two days riding from Northampton to Wells-next-the-Sea and back again, on as many trails as possible, my inability to navigate some of the terrain thrown up proved the point. But I can’t think of any bike (beyond my little MSX125 Africa Grom) I’d rather have been on.

Over the years I’ve dabbled with the off-road experience – I’ve owned a Yamaha DT80, a Honda MTX125, a Honda CRM250 and a Yamaha WR250. I’ve also broken my ribs twice, and torn my rotator cuff. With every injury, I get more nervous about leaving the tarmac.

At the press launch of the G310GS I was impressed with how easily I could ride this bike on the gravel trails, so wanted to use one not only every day on tarmac, but to get me back into exploring the byways of Britain… 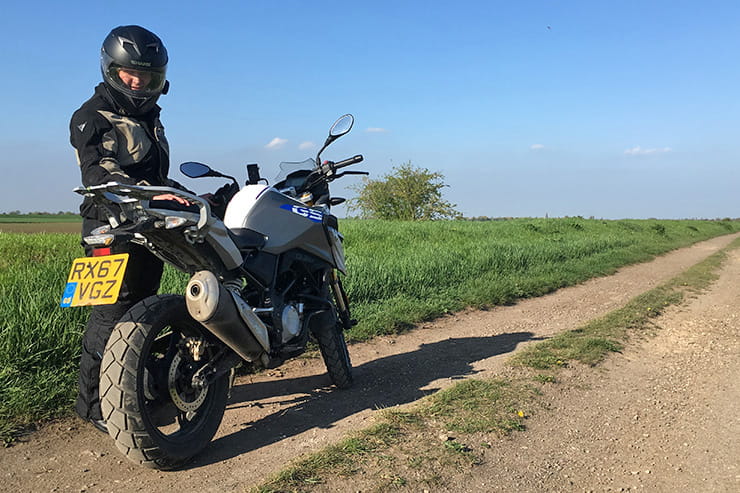 Taking my wife out on some fire trails before fitting the Anlas Capra X rubber was no challenge to the bike, but it did highlight the need to wind the preload right up when carrying a pillion

Is the BMW G310GS tough enough for trails?

It’d be fair to be nervous about the little BM’s strength after the recall for snapping side-stand support. Mine did fail, but having stripped the bike down, I still maintain that this is a pretty solidly-built bike. It’s also proven itself on the Australian APC rally, and through being ridden across the Trans American Trail by Jenny Morgan.

Rally Raid Products in Northampton makes enduro parts for bikes, and has a full kit for the G310GS, including upgraded suspension, spoked wheels, higher and flatter bars, and other parts – owner John Mitchinson believes the bike makes a great lightweight adventure; “Especially if you’re on your own somewhere, this thing is so easy to pick up if things go wrong.” 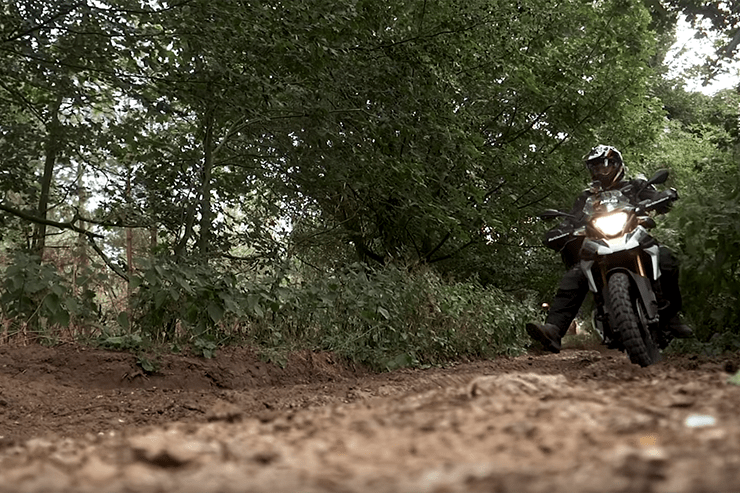 In the mud, the BMW might not be the very best, but it is more capable than me

Does the 310 make me a trail-riding god?

The plan was to ride as many trails as possible over the 400mile trip. George promised a good two thirds of the route would be trails. In the end we fell short, though still covered over 300miles in all, around half of them trails on the way, and a third on the way back. A combination of ridiculous heat, time taken to shoot video, and my exhaustion meant we had to come off the trails more than we hoped, but besides large rocks, we covered almost every surface – grass (great), gravel (okay), dusty trails (great), wet mud (tricky), sand (nope), dense forest (awesome), fords (brilliant) and ruts (f@*k ruts).

The 19” front wheel rides well over harsh surfaces, and the ground clearance is good – a talented rider can blast along on this, but me… I pottered. Standing up gives better control and helps to absorb the harshest bumps and holes, but as soon as I dropped into even the shallowest ruts, I’d flop back down onto the seat. Sand is best tackled with your weight well back and the gas on… I tried, and I didn’t fall off for the whole trip, but I was usless and it was exhausting; riding off-road is like skiing – the better you get at it, the less effort it requires.

Could it be better?

To an experienced trail rider, the suspension is the most obvious weakness off-road. At my level, it’s not such an issue, but even I found it was bottoming out too easily. Riding one of Rally Raid’s modified G310GSs, the difference was clear, with much more control over the damping from the Tractive fork internals and shock.

The upgraded bike’s repositioned bars also gave me a more commanding riding position, and made it slightly comfier to ride standing up, while the Scorpion exhaust gave a much more pleasing bark to the engine.

Having ridden with Nathan on his Royal Enfield Himalayan, I realised how much more luggage capacity he has – while I carried everything I needed without any problems, thanks to the MotoFizz Camping Seat bag, I envied his pannier racks and strapping points on the front. With the right kit, it’d be possible to throw more over the GS though – just be aware that uphill with a full-laden G310GS is not going to be as rapid as a larger-capacity machine.

But with a bigger engine comes more weight in the motor and frame, which would be to ruin what makes this miniature Gelände/Strasse so good.

Yes, there are better off-road machines, but given my ability, despite the limited suspension, it’s more than capable of tackling the little adventures that come from straying off the tarmac every so often… and that’s all I really want. 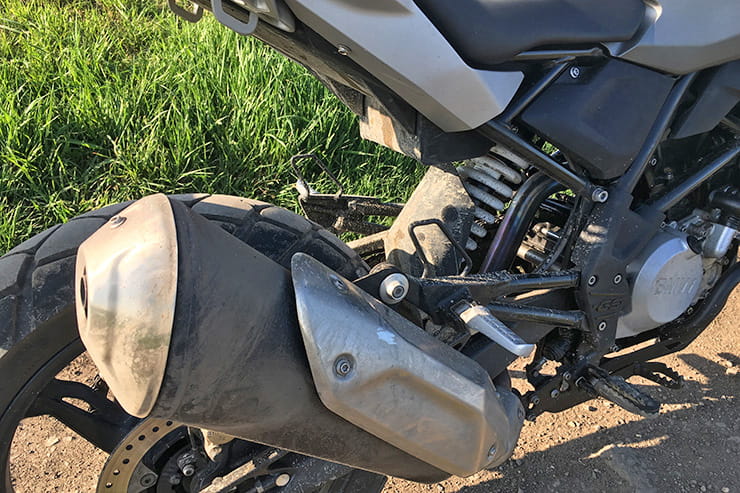 The shock protector is a neat standard touch on the BMW

• I can enjoy it on more surfaces than bigger, heavier adventure bikes

• There’s a fantastic upgrade path thanks to Rally Raid