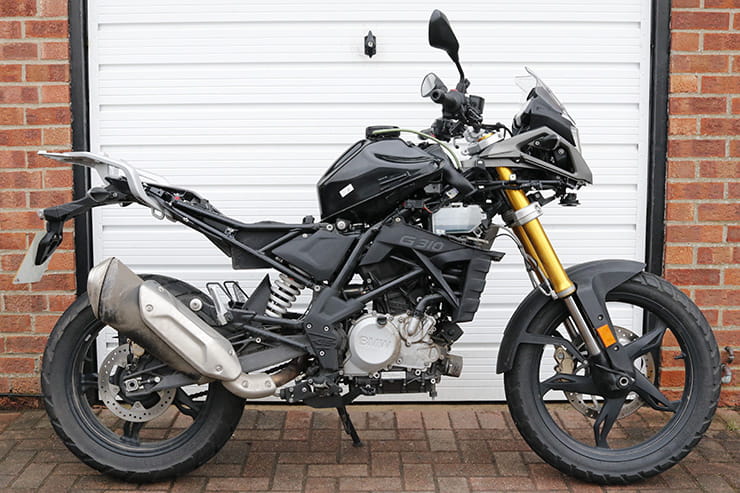 I heard a great anecdote from a BMW G310GS owner the other day… “I was at a bike meet,” he told me. “This guy came over, took one look at my bike, and said ‘I don’t know why you bothered.’

“I asked him why he thought that. ‘Because it’s only a three hundred and it’s made in India,’ he said to me.

A bit harsh? “No – you can’t reason with people like that; they’ve made their mind up so why waste time on them?”

It is indeed ‘only’ a 313cc engine, but that’s fine unless you need high speed cruising. And it is made in India, but is geography relevant? Surely what matters is the skill and passion of the people making something, and the quality control put in place. Do you honestly think that one race of people is better than another?

Everything is built to a specific budget, and BMW’s miniature GS is no exception. Its release was delayed while BMW made sure it was going to be built to the quality the company demanded, and I took my long-term test version apart to see what that standard was… 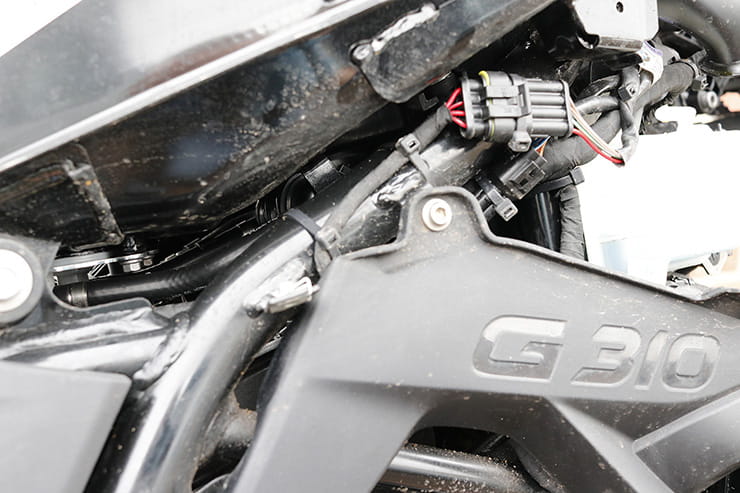 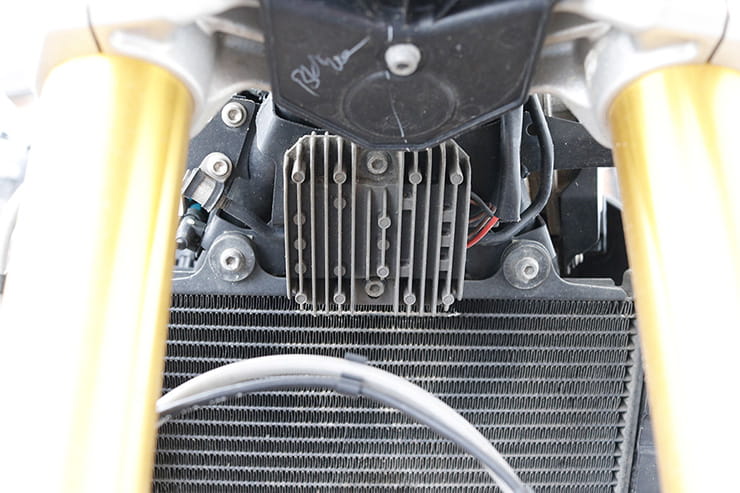 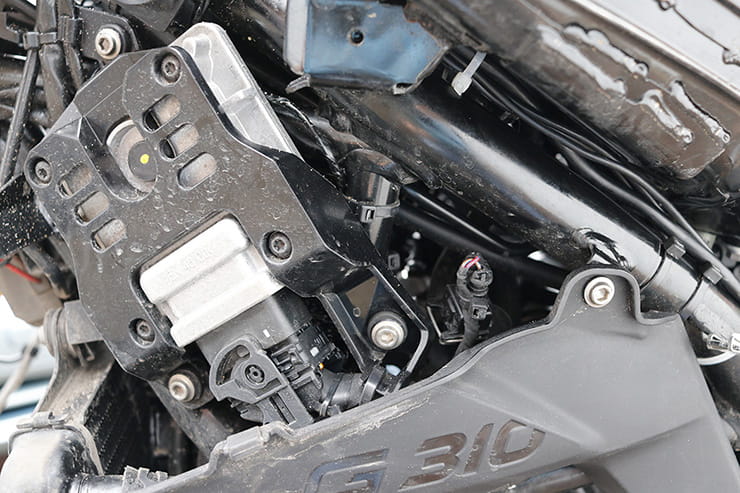 Under the skin, the little BMW appears well made

Stripping it down is made a lot easier by needing just one tool – a 5mm Allen key. The plastics are tough and well finished, though taking all the panels off is time consuming, simply because you need to remove the left, right and centre tank covers in one section, and to do that you have to remove the two front panels – it’s a total of 19 bolts, with three different lengths, though it’s pretty clear which go where

While the clips used to hold the panels together are very tough, one of them under the centre tank panel was broken, and a bolt was missing. There were also a couple of bolts missing from under the right hand edge of the side panel… as this bike had been used before I was loaned it for the year, this wasn’t a manufacturer issue – someone has clearly borrowed it and stripped it down then not bothered to put it back together properly. It’s also likely they tried to force the tank panels off without removing them all. Ultimately, it all still goes back together solidly, but someone’s obviously tried to shortcut the disassembly. The beak uses four different bolts, but the tail – which has four bolts each side – uses all the same sizes. Again, only 5mm hex-heads are used, which shows good consideration for anyone working on the machine. 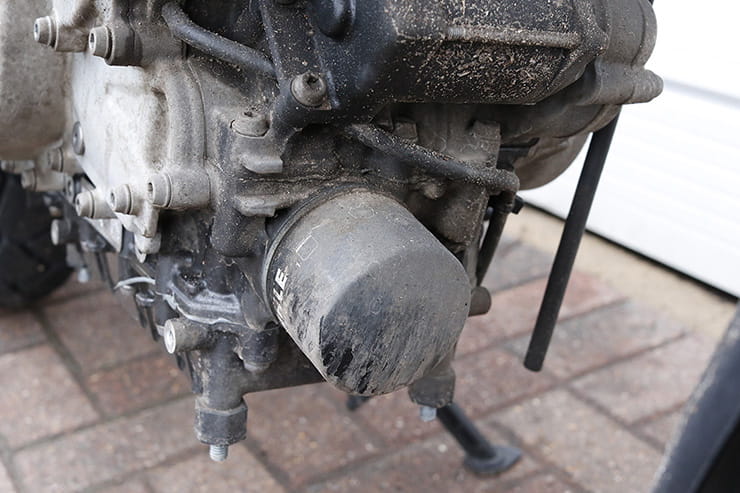 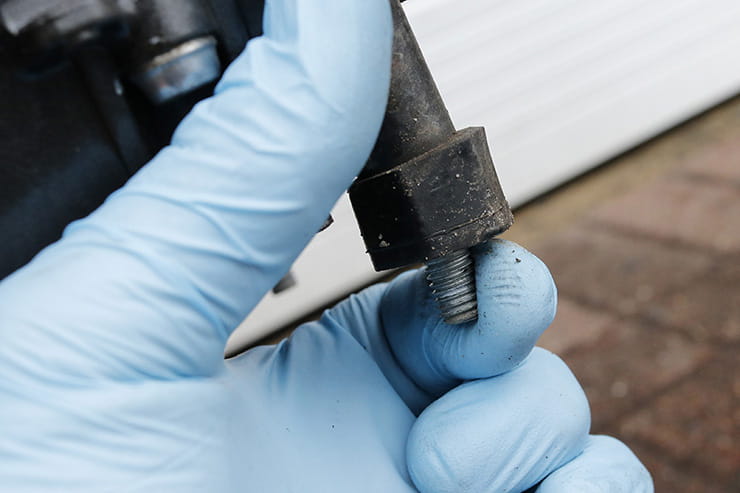 The oil filter is front mounted, but covered by the sump guard when riding, which is mounted using rubber-isolated fixings

The plastic sump guard is quite flexible, but it will stop stones flung from your wheel going through the front-mounted oil filter. The guard is bolted into the bottom of the engine using rubber-isolated fixings, so any heavy impacts shouldn’t damage your motor and cause expensive damage. Rally Raid Products is about to release a more solid, metal sump protection system.

The battery is easy to access just by removing the key-operated seat (and there’s space under there for some bungees and a small lock). 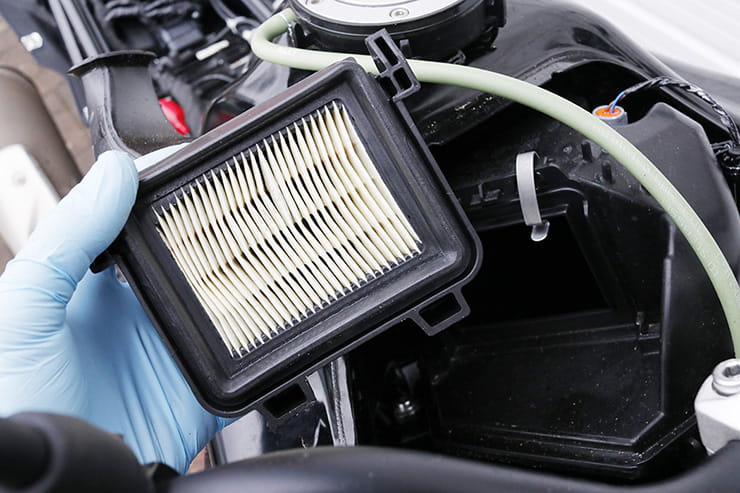 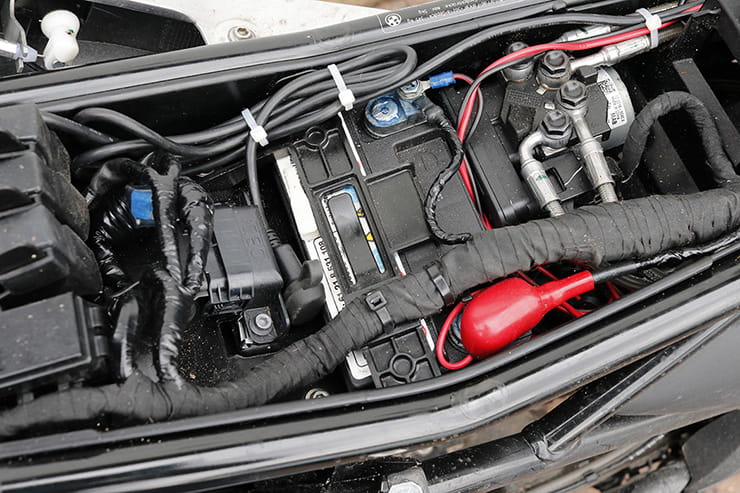 The small air filter can be accessed without removing the tank, while the battery is easy to get to

Once the tank panels are off, the air filter can be accessed without having to remove the tank itself. The filter’s tiny and it’s great to find that it’s reasonably easy to get to… those riding in harsh, dusty conditions will appreciate the design. You’ll need to remove the tank to get to the spark plug, but this is no great chore.

The chain adjusters are easy to use, and the rear wheel spindle is retained, so you don’t have to faff with a spanner on both sides. There’s also only one wheel spacer on the front and rear wheels, so again less hassle, but the rear caliper has to be set just right in order to get the rear wheel back in.

In complying with EU regulations, the G310GS has a standard OBD (On Board Diagnostics) port – I plugged in my own generic reader, which connected immediately and gave me access to data from the fuelling system. As with other bikes and cars, a generic reader will only show you so much (typically emissions-related information), but this tool has helped me fix a lambda sensor on my wife’s ageing Toyota, and a crank position sensor on an old BMW car I used to own – it’s great to finally see OBD appearing on bikes. 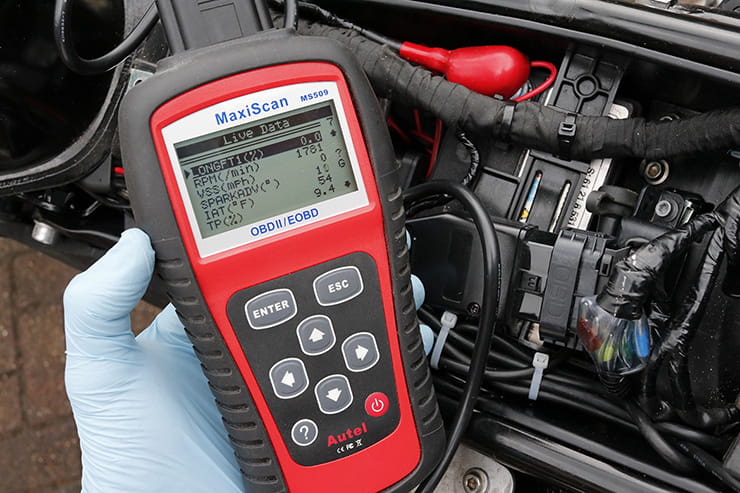 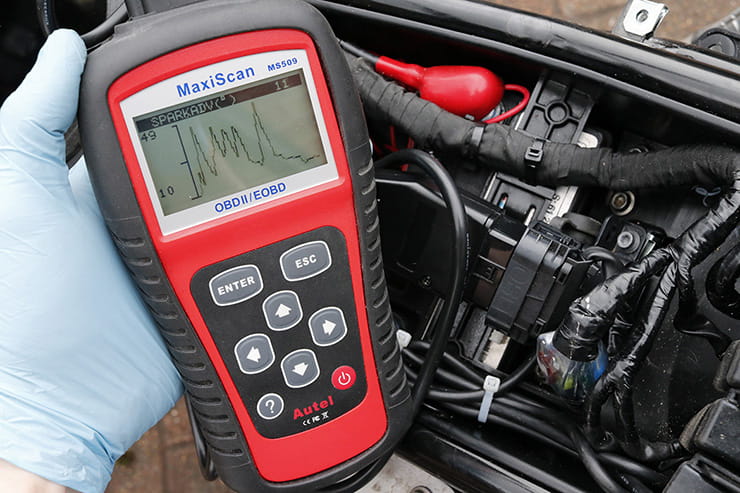 A generic OBD reader works fine with the BMW

The two infill panels that cover the rear brake reservoir and rear shock preload can be removed with just one 5mm hex bolt each – once off, the supplied C-spanner is easy enough to fit in and wind the preload round – I used it to jack the rear up when riding fire tracks with my wife on the back; at maximum, she found it far more comfortable as we weren’t bottoming out anywhere near as much. 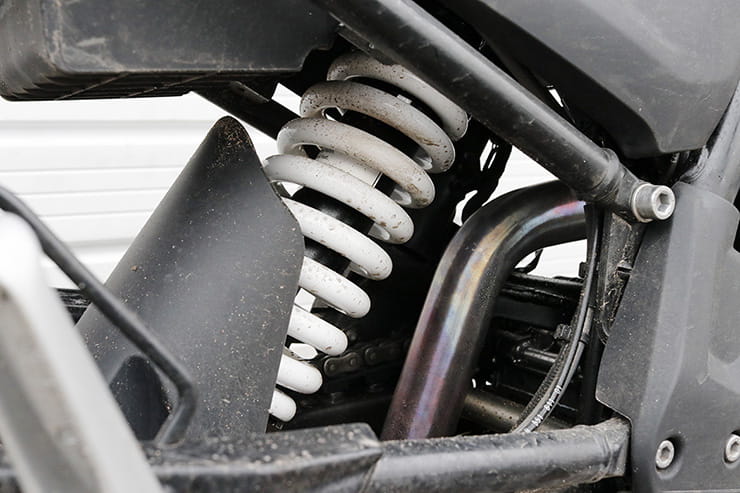 The rear shock is protected by a plastic guard

I’ve left the preload wound up full – the suspension is okay, but with no adjustment besides rear preload, there’s little that can be done to improve it. Rally Raid Products can sell you some excellent Tractive kit, which is made by the engineers who used to be behind WP suspension, before KTM bought it out.

The tool kit is okay, though there’s nothing for the front wheel – you could remove and refit the rear wheel with it, though with a 100Nm torque requirement on the rear spindle, you might struggle. And for some reason there are three 12/13mm spanners in the bag.

Of course, BMW G310GS owners would not be alone in being expected to invest in a more comprehensive tool kit if they’re serious about working on their bike. 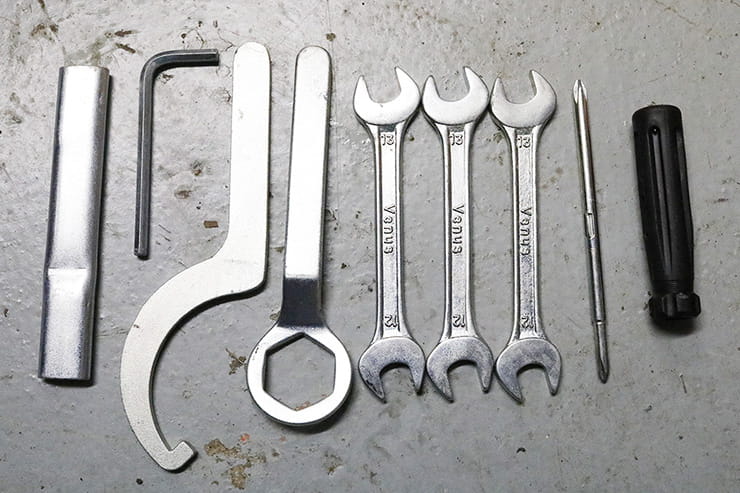 The plastics seem very good, and underneath them I’m thoroughly impressed with the BMW’s construction. The frame is well welded and finished, and I can’t help but be impressed by the aluminium swingarm, or the little touches like the rear shock guard, the ABS rings on the wheels that are filled with plastic to stop them collecting mud, or the plugs that seal the rear of the subframe… I’ve seen plenty of more expensive bikes with these open, waiting to collect water.

I could only see one area that appeared prone to catching water, and that’s a short recess that forms part of the clock support mounting. It doesn’t go anywhere, but water can lay in there after a wash. It’s fully painted, so shouldn’t be a problem, and I sprayed the whole bike with XCP Rust Blocker. 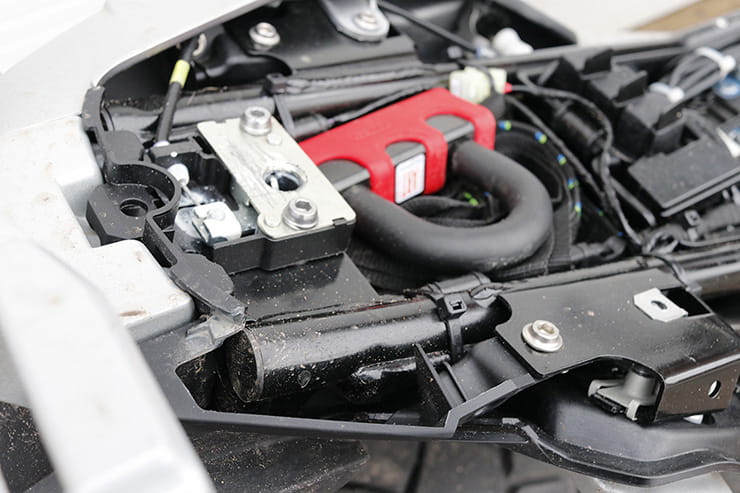 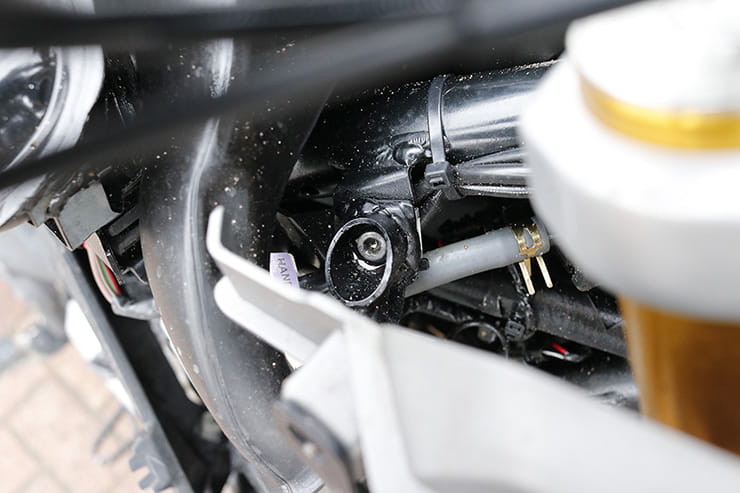 The subframe is plugged at the end, and only one small point seems to be prone to holding water

I’ve had just one issue with the machine since I’ve had it: from the outset, if pulling away fast from a standstill, there’s a brief, nasty graunching sound from the clutch. I checked with Adam Mitchinson, who was one of two people riding a pair of them on a 3,500km Australian enduro challenge – he said he’d heard it before, and it appeared to be the clutch plates bedding in. I’ll keep an ear on mine and let you know.

It’s been a long time since I’ve ridden a motorcycle as accessible and enjoyable as this, despite the size of the engine. I don’t care where it’s built, all I care is that it’s a bloody good bike.

• It seems really well made

• I can take it anywhere

• A lot of bolts to get the tank covers off

• Nasty attitude of some other bikers towards it

• Noise from clutch when pulling away