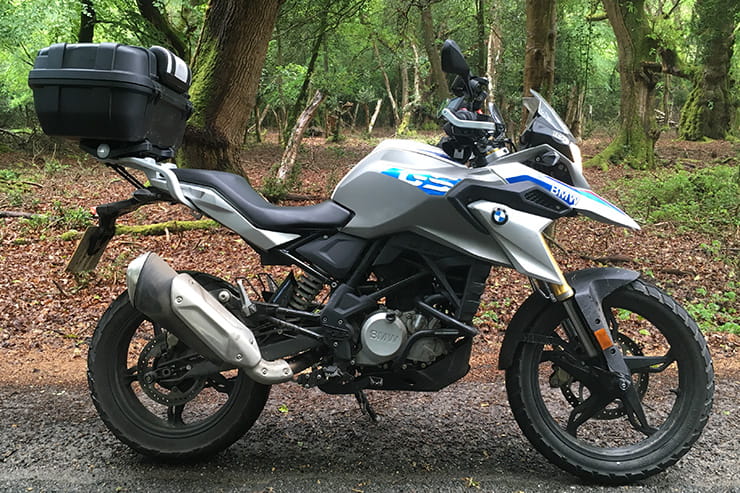 Don’t get me wrong – 207miles is not a particularly long journey. You can smash that out in about three and a half hours on a good motorway run. But take all back roads and it’s a full day’s riding. Whether that’s a fun day’s riding depends very much on the bike…

This motorcycle seems to divide opinion, but for a typical UK rider, I really think that the little GS is very good.

I’m not a fan of mega-distance in a short time for the sake of it; the furthest I’ve ridden in a single day is about 550 miles. The way I see it, it’s not a competition, and I’d rather get to enjoy the scenery than be able to brag that I smashed out 1000 miles by blasting up a motorway. So no, 207miles isn’t a long way, but I made a point of doing it all on back roads. And I loved it. But other riders – including those who’ve never ridden the Indian-built bike – are quick to tell me what’s wrong with it… 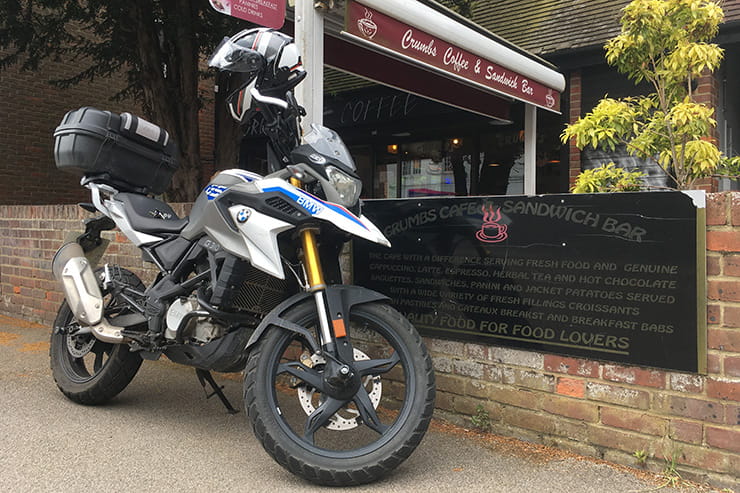 I prefer to take a break on long journeys, rather than smash them out in a rush

“The single-cylinder engine is too vibey”

No it’s not, and I’m getting tired of arguing the point. Maybe I’ve lost all feeling in my hands, feet and backside, but I’ve never had a problem with vibration on this bike. Even with the rubber inserts taken out of the pegs, it’s not excessive (though it’s less noticeable with them fitted). Only the mirrors really show any shakes, being a bit blurry at speed.

The bars are damped, which means they do have a little bit of movement in them, but not to the detriment of handling. In fact, on tight, twisty back-roads, this bike is superbly enjoyable – just chuck it into a bend and it’ll track accurately. Be warned though that if you do ride off-road, the bars get a little more play in them – get your dealer to tighten them back up and they shouldn’t give you any grief again.

The budget unadjustable forks and preload-adjustable shock, which crash down when ridden off-road, are fine on the tarmac. Not top-spec fully-adjustable fine, but ‘I’m-no-racer-I-just-love-hussling-on-back-roads’ fine.

If you’re going to be riding a lot off-road, the GS will show its failings – look elsewhere or upgrade with a superb Rally Raid kit. 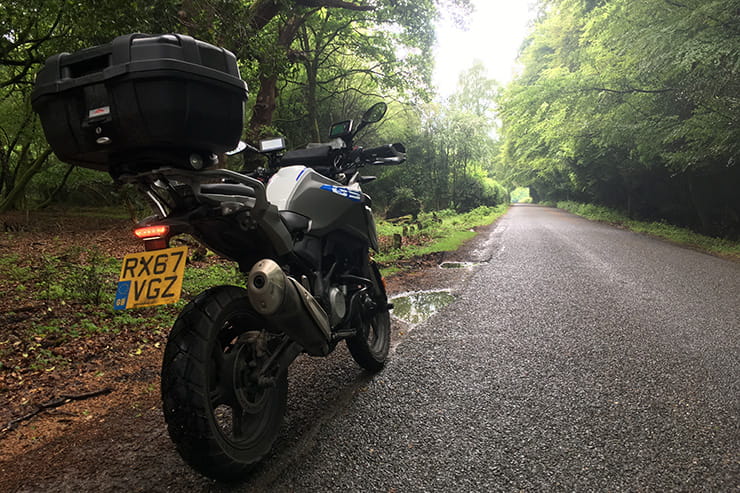 If you’re used to a large-capacity bike then the G310GS can feel lacking. But it’ll cruise at 80-85mph with no problem, and can get up to 90+. I’ve never found windblast an issue.

Uphill into a headwind you start to notice the relative lack of grunt, and overtaking a car on back roads takes a little more planning, but it’s not really a problem unless you desperately need to regularly ride well over the speed limit.

“You can’t carry enough on it”

If you’re travelling around the world, you’ll need to strap a fair bit on. You’ll be up against the same challenges as if you do it on something like a Honda CRF250L.

Personally, I’ve had no trouble – my 52litre Givi top box fits fine, and even when I massively overload it, the front end doesn’t get unruly.

Nathan’s Royal Enfield Himalayan is probably the best bike if carrying a hell of a lot is essential. For the average UK rider, the G310GS will probably suffice. 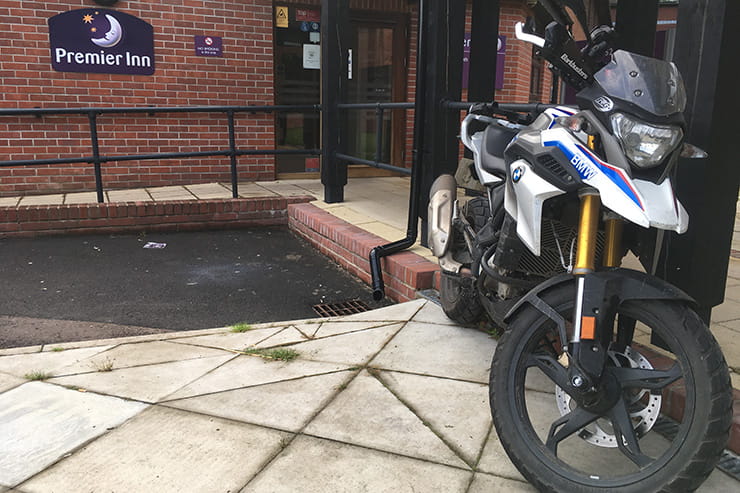 I’m 5’10”, and I’m more than happy on this all day. I do tend to get an achy bum, but this is something I suffer on most bikes. Riding backroads I tend to be moving around a lot, but on motorways I’m more static, so notice it more. I didn’t have any regrets though after hacking back non-stop (besides two fill-ups) from Dorset to Peterborough.

“The fuel tank’s too small”

Okay, I might have to concede a bit here. At 11litres it is small – it’s what helps towards that 169.5kg ready-to-ride weight – but ridden gently it’s not too bad.

On the backroads down to Dorset, riding in a very spirited manner, I got 71mpg. That makes the BMW good for 170miles.

On the way home, with the throttle pretty much pinned open on the motorway, I saw 58mpg. The tank will get you about 140miles between fill-ups.

Based on that, I got an average of 65mpg. That’s a maximum tank range of 158 miles, so for safety you’d want to fill up every 130miles or so.

Whether that’s enough will depend on your day-to-day riding. For me, it’s fine, and Steph Jeavons went around the world on a Honda CRF250L, which has a 7.7litre tank; she carried extra in a Rotopax.

I reckon it’s the light weight that makes this bike so good – when I take a wrong turn and have to spin around, it’s so much easier on the G310GS. Riding it at MotoGymkhana proved the ease of use and agility, and even as a relatively experienced rider, I cherish the confidence-inspiring size and handling of this thing.

This little BMW shouldn’t be disregarded as a ‘beginner’s bike’ – it’s so much more than that. And yes, it can handle long journeys.

A quick look around the G310GS

• Very light and easy to ride on almost any surface

• Reasonably priced (for a BMW)

• The side-stand bracket is a weak point 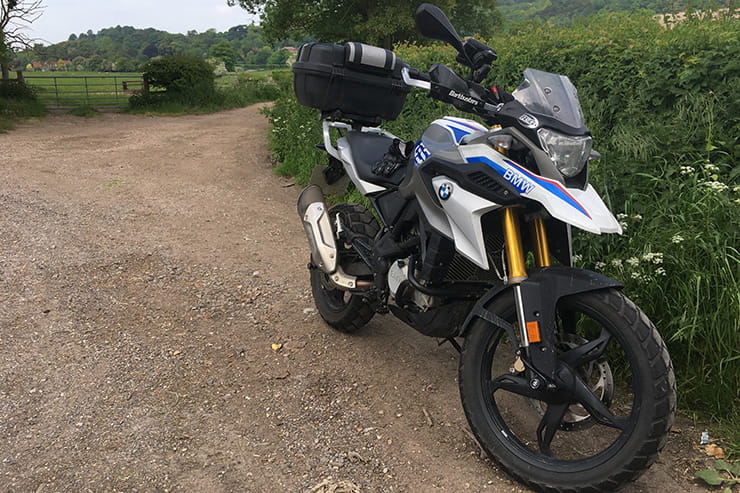