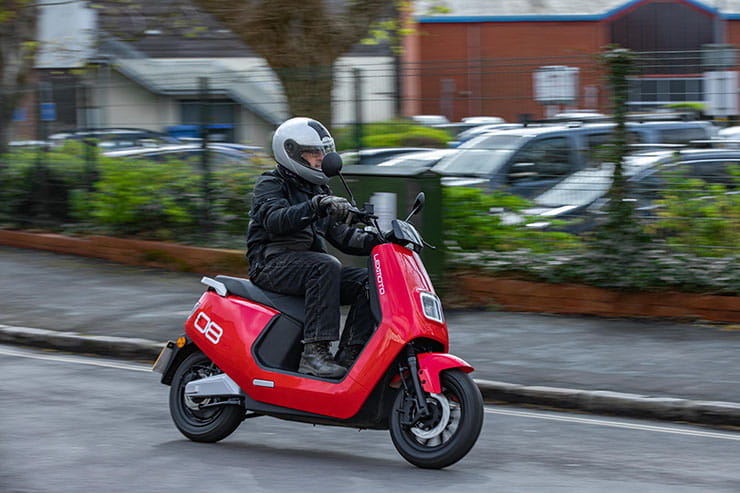 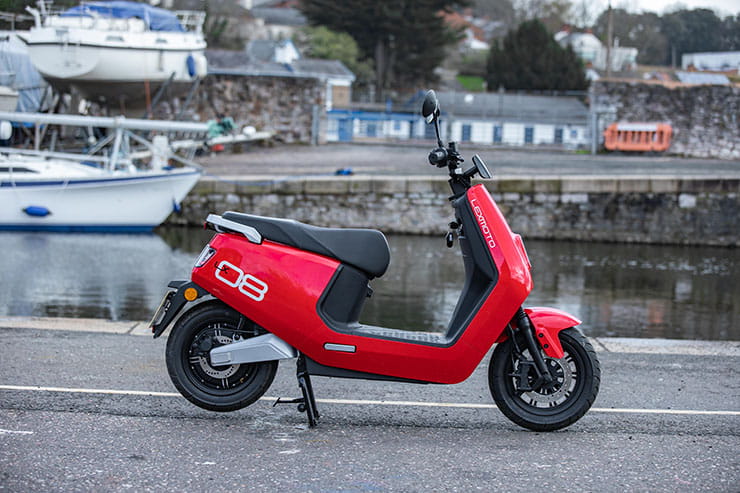 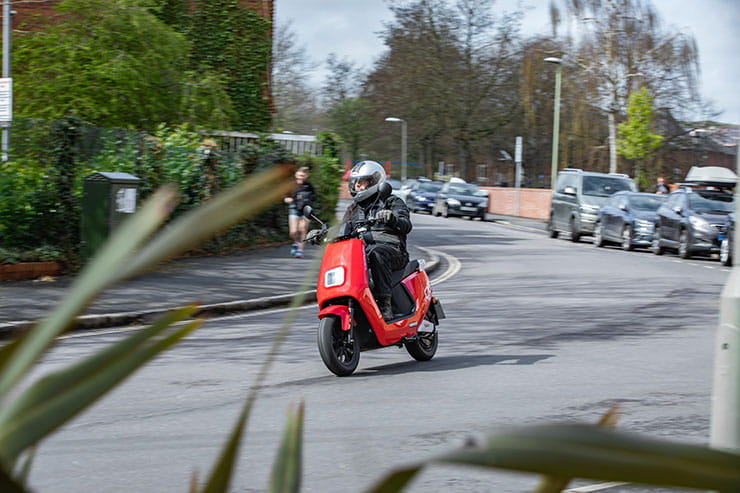 Now here's a thing. Lexmoto now offers seven different electric bikes, four of which are mopeds and three in the A1 class. It's a statement of faith in the way things are going from a company that's a moped and 125cc market leader for years, often topping the UK sales charts.

Lexmoto's range of battery bikes kicks off with the E-Lex at £1800 and tops out with this one, the A1 class LX08 at £3000 – in the usual Lexmoto fashion it's listed at a penny less than that, but let's call a spade a spade. All prices are after application of the OLEV grant, so this is as cheap as they come.

In the increasingly hard fought A1 electric class, it offers a 47mph top speed, twin removeable batteries, a claimed 60-mile 'real world' range and remote locking, but is that enough?

You can tell when manufacturers think a market segment is about to take off – the number of bikes or scooters angling for a slice of the cake suddenly increases. And so it is with A1 electric scooters, as the LX08 has a whole raft of competitors

But in the Lexmoto tradition it's almost the cheapest of the bunch. Piaggio's 1 Active equals it on price, though with a top speed of only 38mph, the Italian-badged scoot is little more than a 'moped plus' and Lexmoto's own Yadea G5, which is twenty quid less. At the other end of the price range, Piaggio also offers the Vespa Elettrica at £6300 for those who insist on the real Italian job. The Seat Mo (£5695) is also made-in-Europe while the Niu N-GT, Sunra Robo S and Super Soco CPx occupy the middle ground, price wise.

All of these A1 electrics offer 45-60mph (Piaggio apart), removeable batteries and enough room for two. Available in white or red 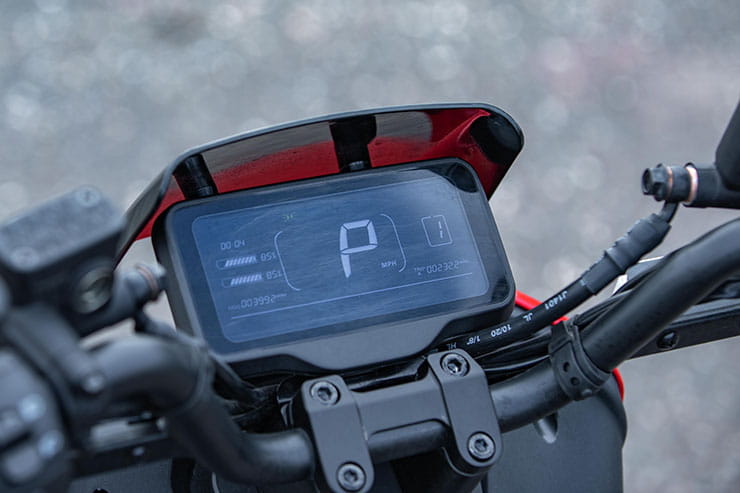 The LX08 may need an A1 licence, but that doesn't mean it can top 60-65mph like the average 125. In fact, at 4Kw (5.4bhp), it's got little more power than the average moped, but it has the usual electric motor secret weapon of plentiful torque, plus of course it's not limited to 28mph. There are three modes give top speeds of 32, 35 and 47mph, the speediest of which is enough to get along with the traffic in 40 limits, even urban dual carriageways, though personally I wouldn't venture onto a motorway on one of these.

It's reasonably quick away from the lights as well, maybe not the quickest electric scooter I've ridden, but good enough. Acceleration is linear up to around 45mph, so it's all useable speed. As the batteries get low, top speed is blunted in the interests of preserving range and getting you home, first to 40mph, then into the 30s, but not really into limp-home mode.

Rear hub motors are increasingly standard on electric scooters and even the smaller e-motorcycles – at this power they fit neatly within the wheel rim and do away with the need for any kind of chain or belt transmission, apart from some internal gearing. So it is with the LX08 and its simple air-cooled motor which of course will never need its oil and filters changed, because it doesn't have any. 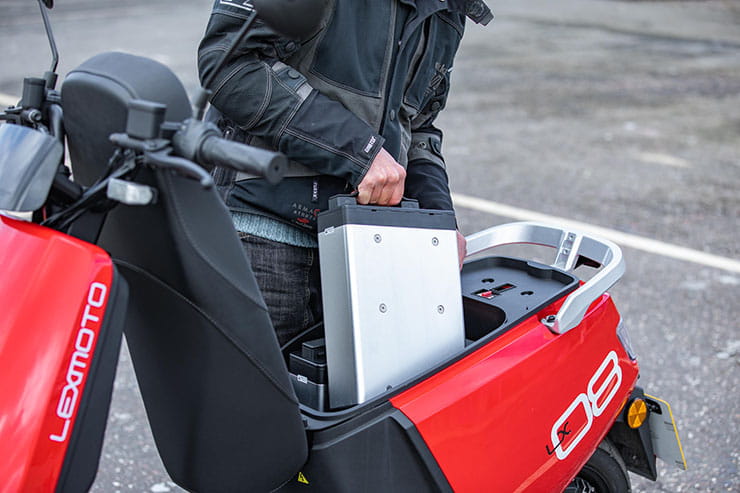 Above: twin removable batteries are convenient, if a little heavy

Removeable lift-out batteries are another increasingly standard feature on electric scooters, which makes them a realistic prospect for flat dwellers or anyone without off-road parking with a handy charge point. The Lexmoto has two 1.9Kwh batteries rather than one big one, for the very good reason that they are lighter to lift out.

They still weigh 10.5kg apiece, which is not to be sniffed at if you live on the fourth floor and the lift's out of action. Still, they are easy to remove (one simple plug each) and will plug in at any domestic three-pin socket – they can also be charged on board the scooter, via a socket in front of the seat. There's no room for the charger anywhere though, so you'll have to keep that at home.

Now then, range. Lexmoto claims a 'real world' 60 miles, but in practice the test bike managed 32 miles on 72% of battery – let's say 40 miles from 100% to near flat, maybe 42 if you really want to flirt with a low charge. That was on a mix of city centre traffic and 40mph+ in the suburbs, so just using the LX in 30 limits will give more range. 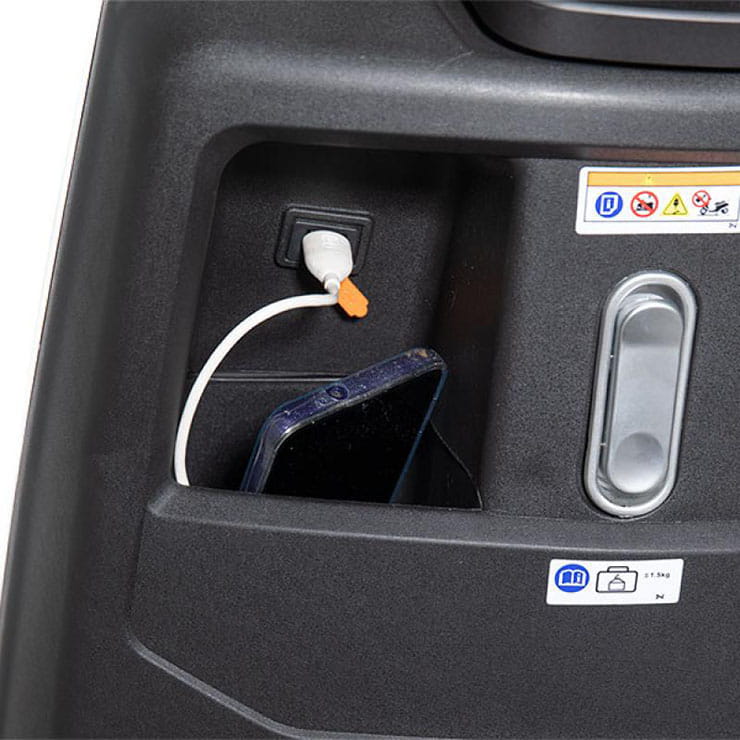 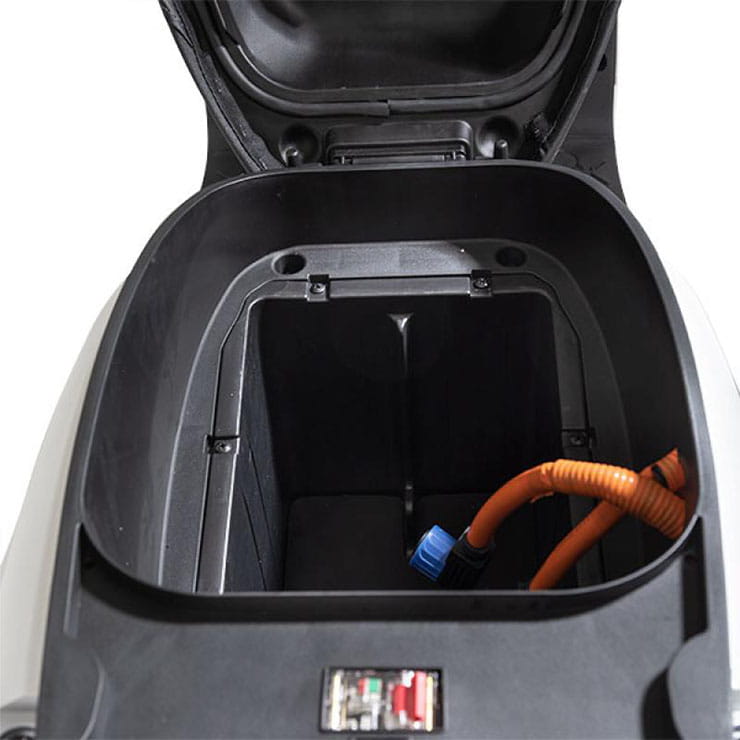 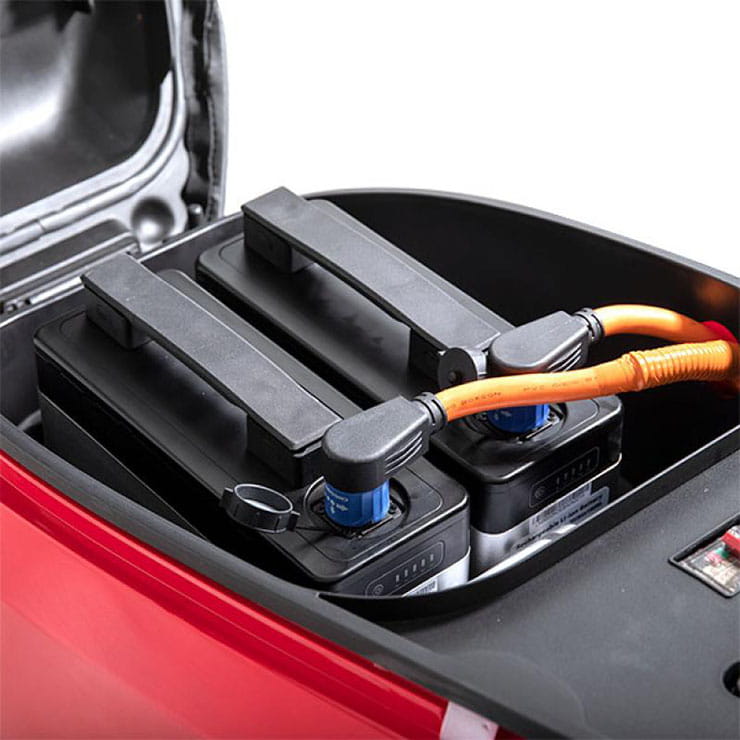 More performance than a moped demands a more substantial chassis, and the LX08 delivers with chunky 120/70-12 tyres, decent forks and twin rear shocks with pre-load adjustment. I found the steering a bit oversensitive when coming back on the throttle, maybe because the power delivery also comes in quite suddenly at low openings – it could be just something you get used to.

Other than that, the bike inspires confidence, with good grip from the Yangxing tyres (in the dry) while the fairly basic suspension does its job well. It also felt completely unruffled when flat out in a straight line, always a good thing on a rain-soaked dual-carriageway full of tetchy commuters. It's also a slim machine with a good lock and light steering, plus tips the scales at a lithe 84kg – all the right ingredients for slipping through traffic. 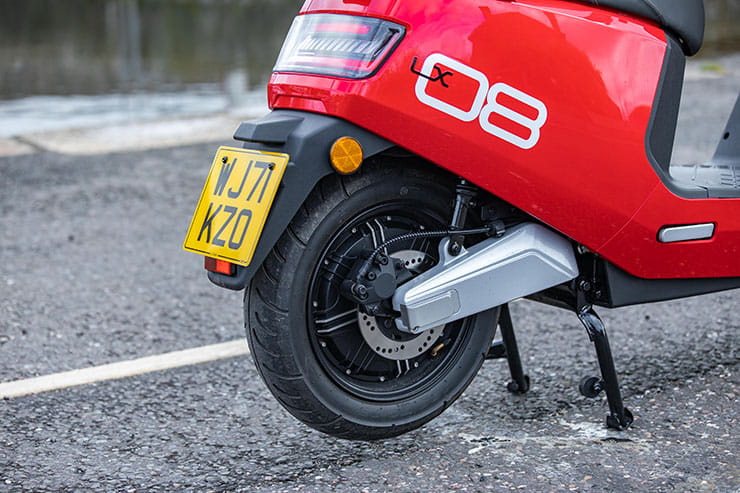 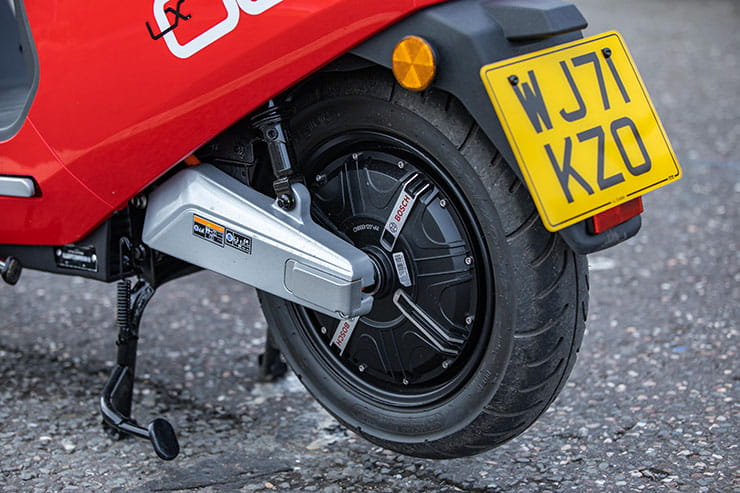 You don't get ABS at this price, but the Lexmoto has the next best thing – linked discs, one at each end, which deliver strong stopping power without any dramas or premature locking up. They're easily good enough for the scooter's performance.

No one buys a scooter for its long distance touring ability, but comfort's still important if you're commuting on one every day. The Lexmoto's seat is a bit soft, so you sink into it, but with a longish wheelbase the LX08 does feel roomier than a moped. There's also room for a pillion, who gets proper pegs and a solid grabrail.

Always a tricky section this one, at least with the cheaper scooters, which don't go overboard on rider aids or indeed anything else. So, the LX08 has no ABS, no regen braking to put energy back into the battery and no Bluetooth connectivity. But it does have a remote lock/alarm and the dash has a big speedo with two battery gauges (one for each battery) which give a good steady percentage read out, though they're too small to read at a glance.

What else? There's a clock and other practical touches like a centre stand, a big cubby bin in the front apron, USB socket, decent mirrors and fork gaiters. The underseat space is full of batteries, though you could squeeze your gloves in there. Finally, if the LX08 looks too bland and modern for your liking, the LX06 offers much the same package wrapped up in retro styling for the same price.

Lexmoto has made its name on usually offering the cheapest mopeds and 125s, and the LX08 carries on that tradition.  Don't expect true 125 performance, but at 47mph it's quick enough for most 40 limits, slipping through the traffic well.  So, is it financially worthwhile going electric compared to a 125cc scooter? If you do enough commuting to claw back the price difference in lower running costs, then the answer's yes. 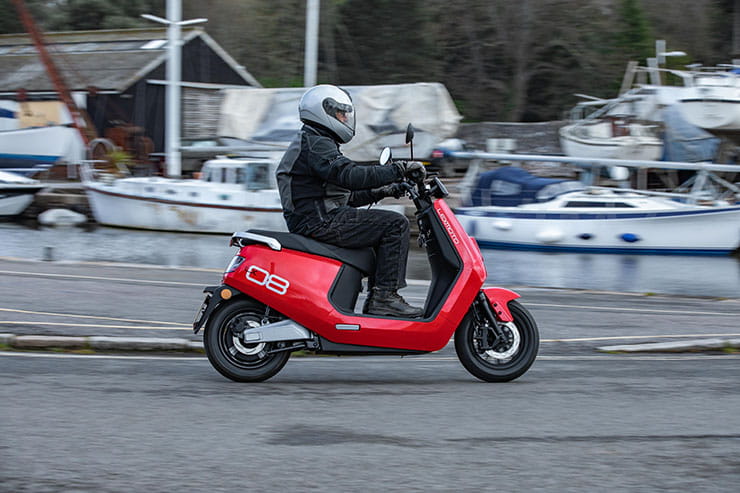 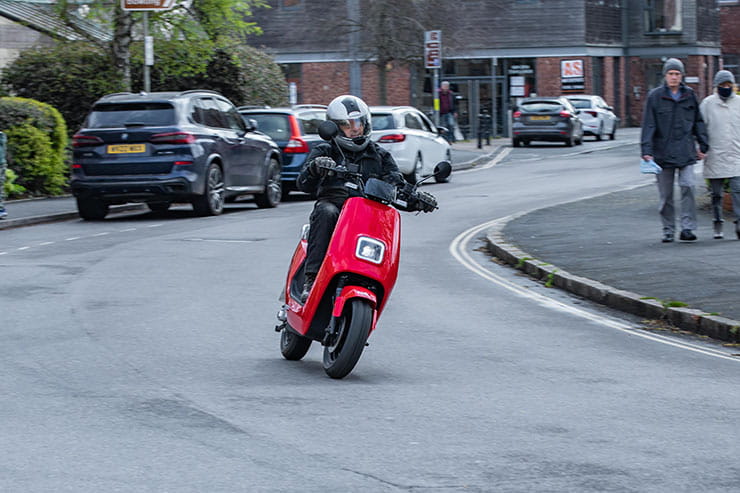 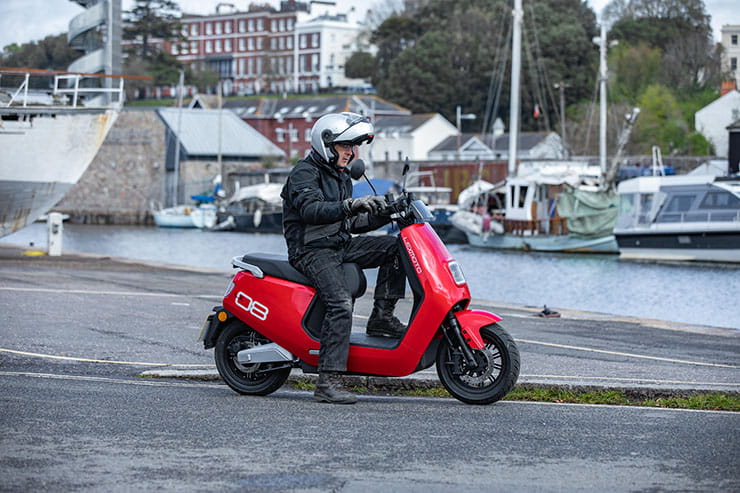