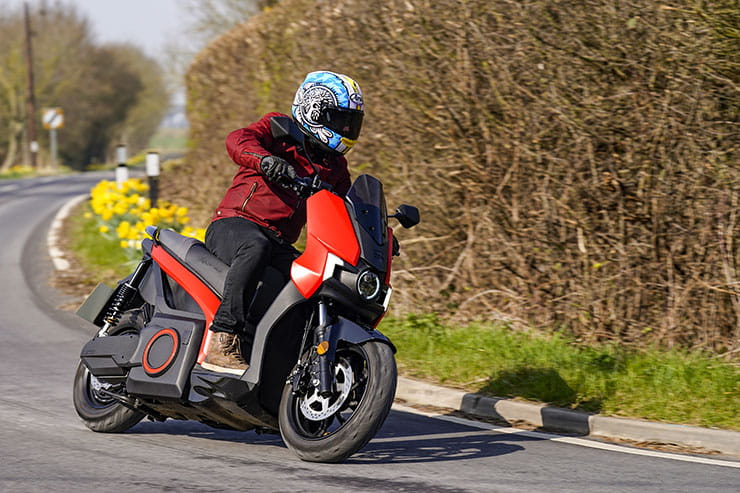 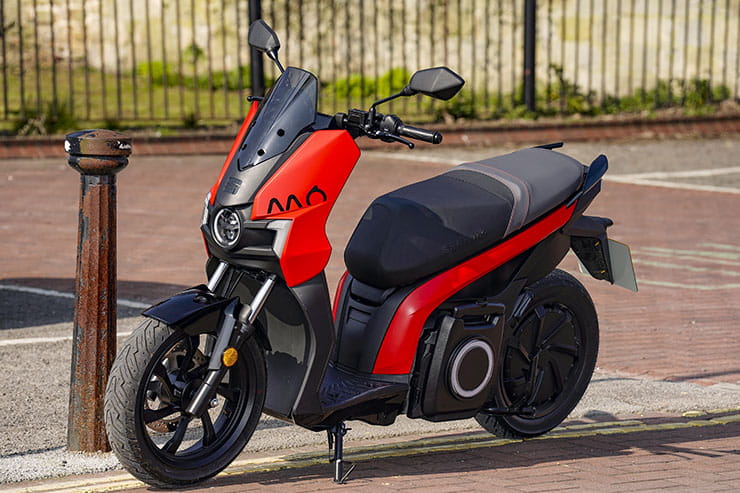 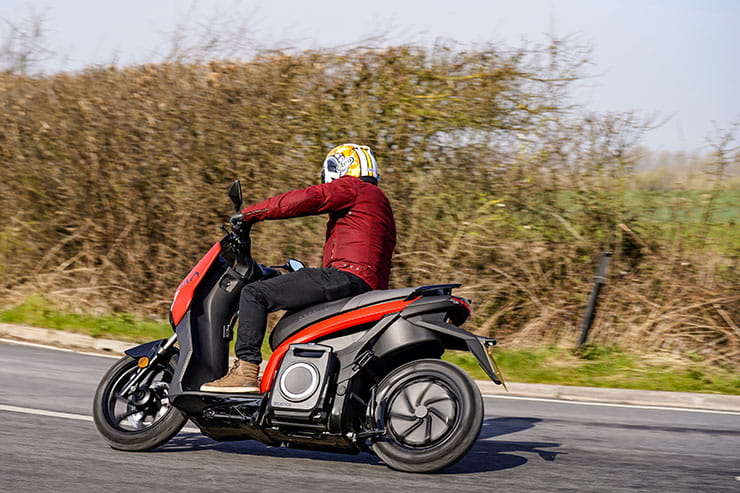 Sharing technology across the industry isn’t new. KTM pool their ideas with Husqvarna and Gas Gas. Kawasaki and Suzuki have shared engines before – do you remember the KLV 1000, which used a Suzuki TL1000S engine? For SEAT to use current bike technology makes financial sense as the MÓ features all the good things about the Silence SO1, along with its 59mph top speed, up to 85 miles range, a powerful 7KW (9KW max) motor, multiple rider modes, large under seat storage, a reverse drive and a great removable battery system. We spent a week running around on the new SEAT in perfect silence. 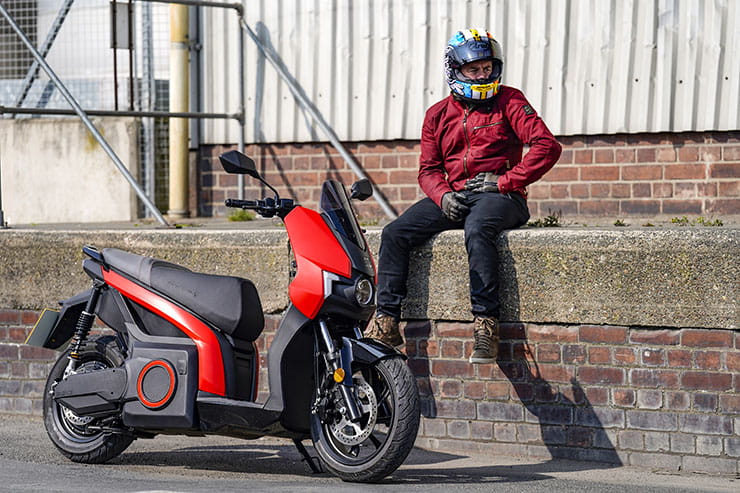 The MÓ is available from 24 selected SEAT car dealers, which should result in a pleasant purchasing experience. For your £5800 (OLEV EV Grant included) or £95 on PCP you get two years warranty, and four years or 25,000 miles on the battery pack.

The sister bike to the MÓ, the Silence S01, is slightly less at £5695, and £99 per month. The sporty NIU MQiGT Evo is considerably cheaper at £4099, but doesn’t have the range of the SEAT, nor the under seat storage.

Should you opt for petrol, Honda’s PCX125 (£3549) is the best seller in this category and has been for some years but fuel and running costs are higher.

The SEAT MÓ eScooter 125 is powered by a 9KW (peak) electric motor located inside the rear wheel, which should make it comparable to a 125cc petrol equivalent. Claimed torque is a huge 240Nm, and best in class. This propels the MÓ to a top speed of 59mph and 0-31mph (50kph) in 3.9 seconds. Strangely the almost identical Silence has a slightly higher top speed of 62mph. But you get the idea: 60mph-ish is similar to the claimed top speed of a petrol 125cc

The all-important range is claimed to be ‘up to 85 miles’ on a single charge from the removable 5.6kWh, 40kg battery. Obviously, this ultimately depends on where and how you ride, plus the pre-selected rider mode – and there are three to choose from. Charging time, from fully dead to fully charged, is six to eight hours from a normal 240v 3-pin socket. This can be done at the bike, or by removing the battery (which is a piece of cake; more of that later). 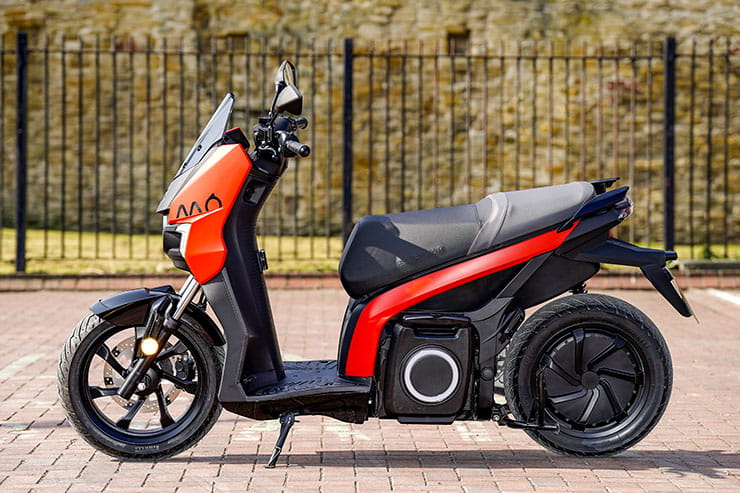 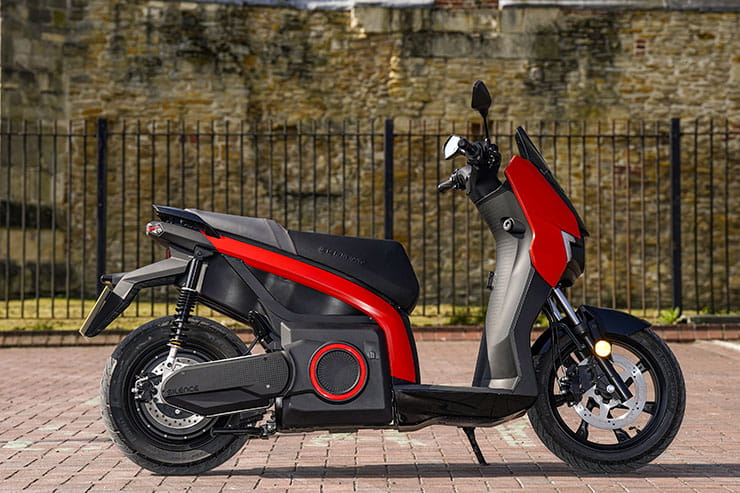 The main motor is housed inside the rear wheel.  You turn it on then twist and go in perfect silence. And, yes, there is even a reverse, activated by a button on the left bar. Keep this pressed and twist the throttle to manoeuvre backwards but be warned: it can be a little quick (with some practice I’d like to see how long and fast I could ride backwards...). Initially, I thought this was a bit of a gimmick, but after a week of riding I found it useful, especially when conducting a three-point turn with a pillion on the back – simple.

For moving in a forwards direction there are three riding modes to choose from: ECO, CITY and SPORT. ECO restricts the speed to 45 mph, CITY to around 55mph, and SPORT is full power. Despite SEAT claiming a top speed of 59mph, I managed to push see an indicated 65mph. Head down you might get one or two mph more, but it will safely and easily push past the claimed 59mph.

For the majority of my ride, I used the CITY mode, and opting for the ECO mode when taking my eight-year-old son to school, or SPORT mode when out of town. Incidentally, my son loved the SEAT, which was easy for him to access, and he loved the silent running. 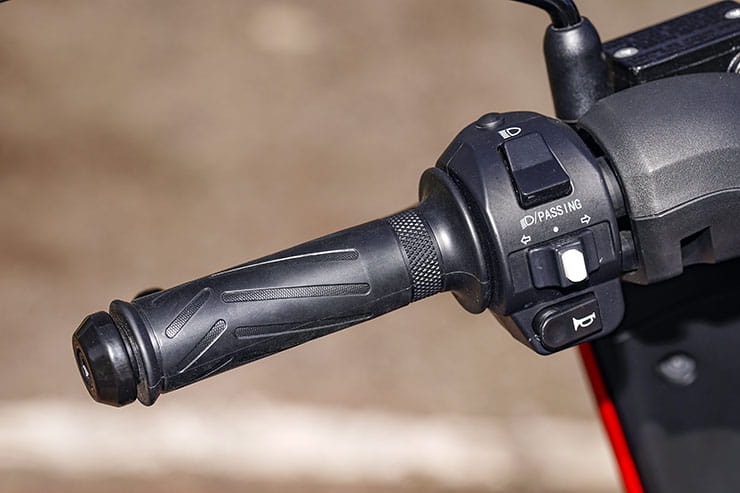 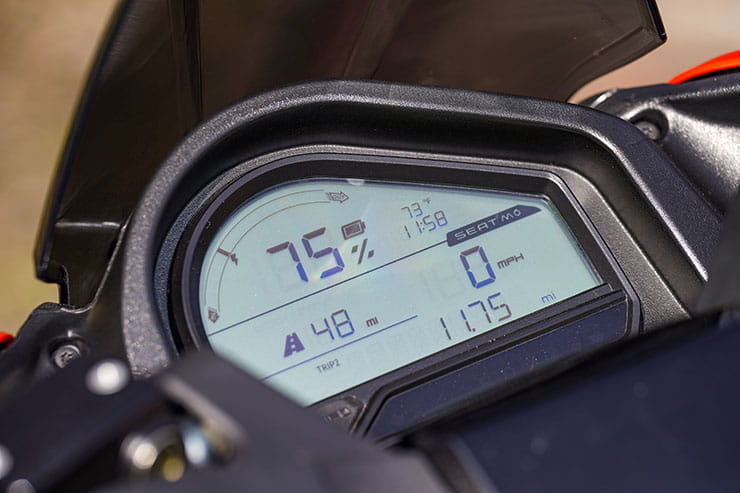 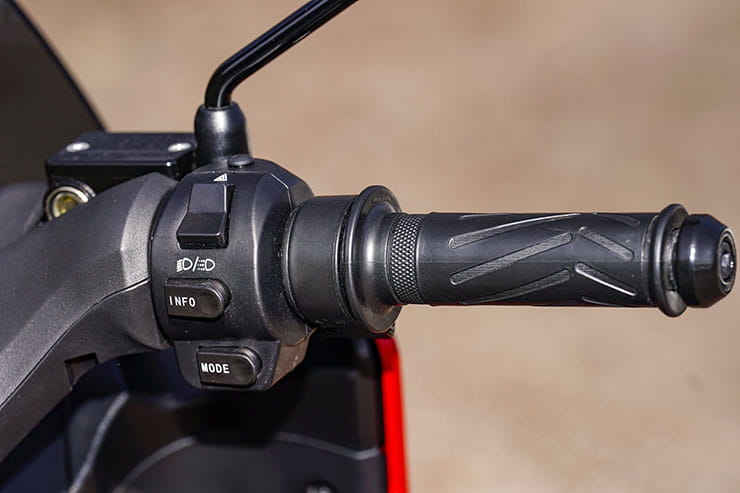 The main battery is 40kg, but this bulk is carried low down in the chassis, not directly under the seat like some of the competition. Keeping the weight low helps reduce the overall feel of what is a heavy bike – at 152kg it’s around 20 to 30kg heavier than its main electric and petrol equivalent and probably one of the reasons why they fitted reverse drive as standard.

Top-notch 140-section rear Pirelli Angel scooter rubber and a neat single rear shock are let down by poor front forks. Arguably, I might be expecting too much, but they feel like springs without any damping, and have very little control. Brake heavily and the forks dive hard. Let go of the stoppers and the forks spring back on the rebound like a jack-in-the-box. Worse still, on faster bumpy roads, they become overwhelmed, and skip across the surface under extreme circumstances. And you only need to increase your speed a fraction above normal for the problem to be become apparent. 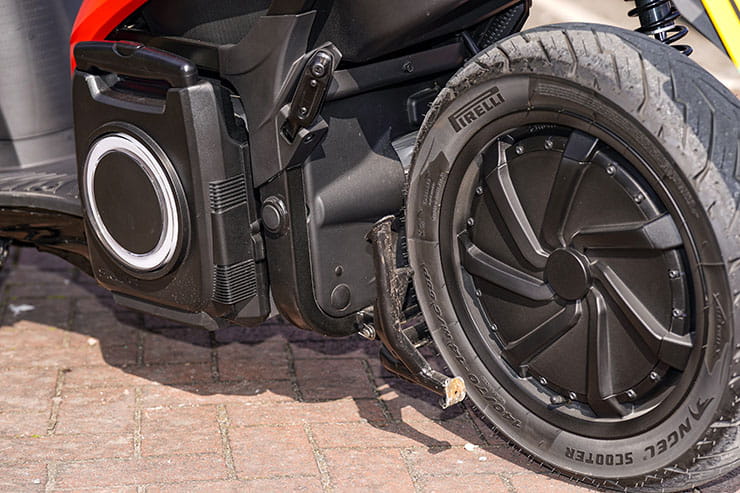 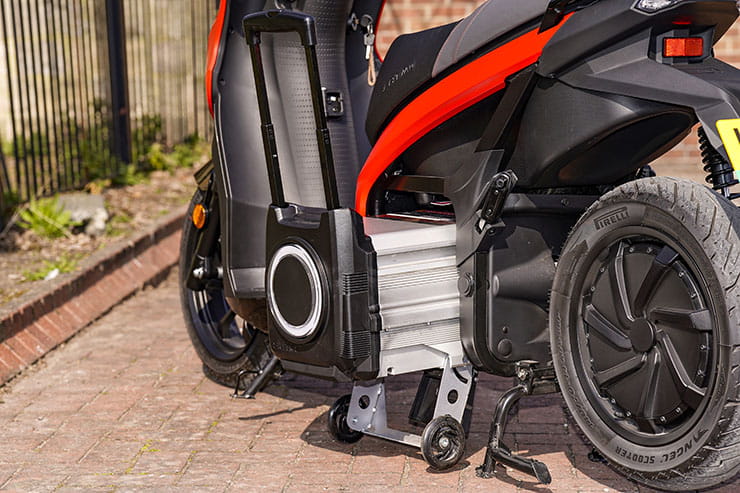 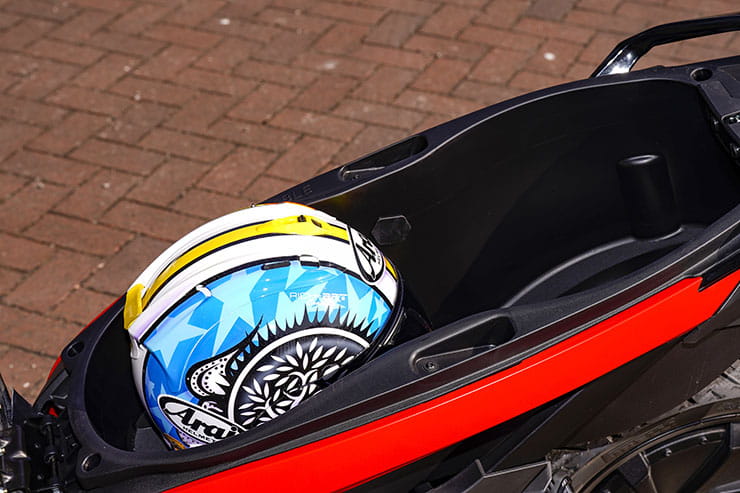 SEAT claims a range of up to 85 miles or 137km. In reality, I managed between 55 and 60miles, but that was ridding reasonably hard at times, and even two-up. To achieve the 85 miles, the MÓ needs to be in ECO mode and not carrying a pillion. However, 55 miles should be more than enough for most 125cc-type commutes. Even if you have a longer haul to work of 25 to 30 miles, you could re-charge the battery to full capacity before leaving for home as a full charge is a quoted six to eight hours via a domestic socket, depending on how discharged the battery is.

And this is the clever part – the SEAT’s big tick: that 40kg battery comes with its own extended handle and wheels – like a small travel bag – and is easy to remove and transport. It’s ingenious. With the SEAT on its centre stand, lift the seat, pull the clip under the seat and slide the battery out of the bike. The wheels flick out automatically, and that is it. Brilliant.

There are many advantages to this. For starters, you can take your 40kg battery effortlessly into the office or home to re-charge. Secondly, it’s impossible to ride the SEAT without the battery, and therefore acts as a deterrent to bike thieves. Yes, other scooters have removable batteries but not on wheels. And no-one really wants to be lifting 20-40 kilos into the office every day.

The right (and neatly adjustable) lever operates a front single 260mm disc brake, and engages the regenerative braking, which adds a little braking to the rear while recharging the battery at the same time.  The left brake is linked (CBS Controlled Braking System) and operates both the front and back brake. This is a scooter so both brakes are hand operated – the adjustable levers are a nice touch.

The brakes are progressive and strong, especially when you use the CBS linked system. I preferred the linked brakes, as the front forks struggle to cope with the weight transfer under firm braking. There’s no ABS, as like most of the electric competition, despite the higher price tag. 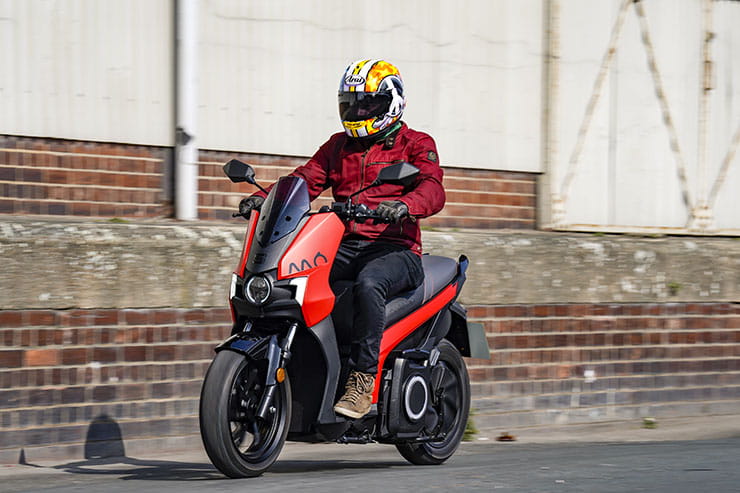 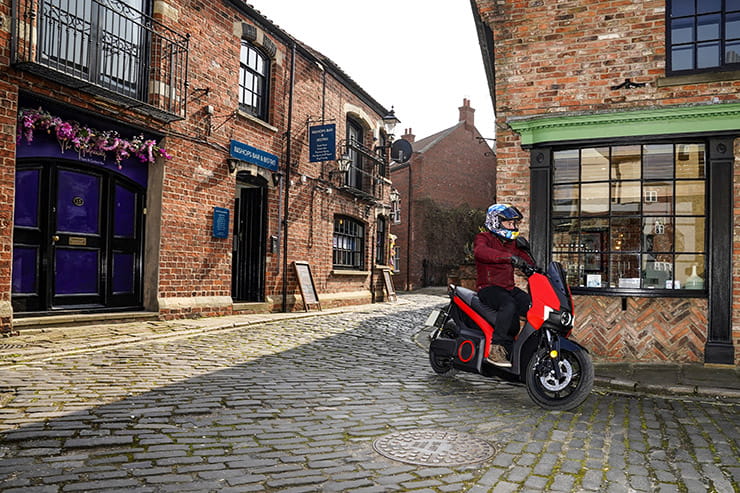 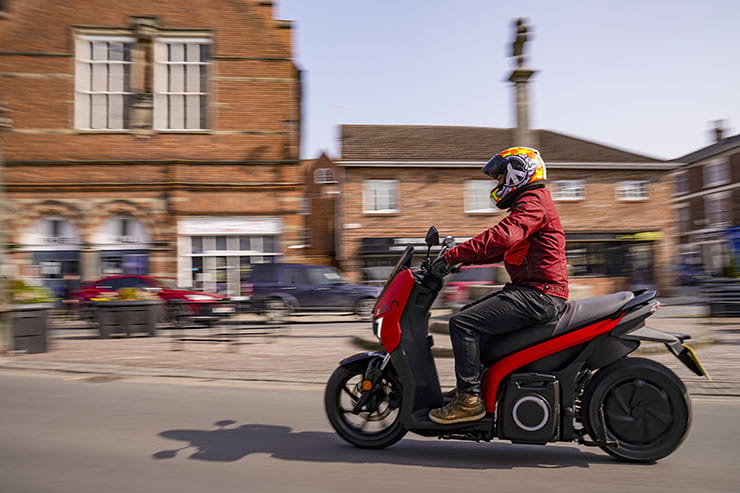 No rider aids, no traction control or ABS – just three riding modes which restrict the power. As you’d expect, there is connectivity, and an app allows you to quickly and remotely see how much charge and range you have left. You can also check your trip, journey history, and see how much carbon you’ve saved because you opted for electric over petrol. The app will even show you your bike’s location, should you forget where you’ve parked after a heavy night…

Accessories-wise, a 39-litre top box is available but there is a huge amount of storage under the seat, and enough for two full-face helmets. SEAT also offers a screen and mobile phone holder. There is a USB charger up front as standard.

We’ve ridden two of its electric direct competitors within the last few weeks, the NIU and the Yamaha, which feature in this list of four

SEAT has stepped into the bike world with what is essentially a rebadged Silence (it even says Silence on the swing-arm below the single rear shock). But this is an advantage, not a disadvantage, as Silence has proven tech’ and an excellent all-electric scooter. I love the design, which is very neat, and the portability of the removable battery is superb. There’s generous under-seat storage, power is more than enough and on par if not better than a 125cc petrol scooter. An actual range of 55-60miles is enough for most while the brakes are strong, the Pirelli rubber is quality and the build is good too. Near-silent running means you all too easily hear the bangs and clatters on a cheap build – but the MÓ is well made and of high quality compared to some.

The downside is poor front forks, which potential owners will notice after a short test ride, and the price. It is at the high end for a 125cc petrol equivalent scooter, but aside from the forks this is reflected in the quality, feel and the very welcome removable and portable battery. 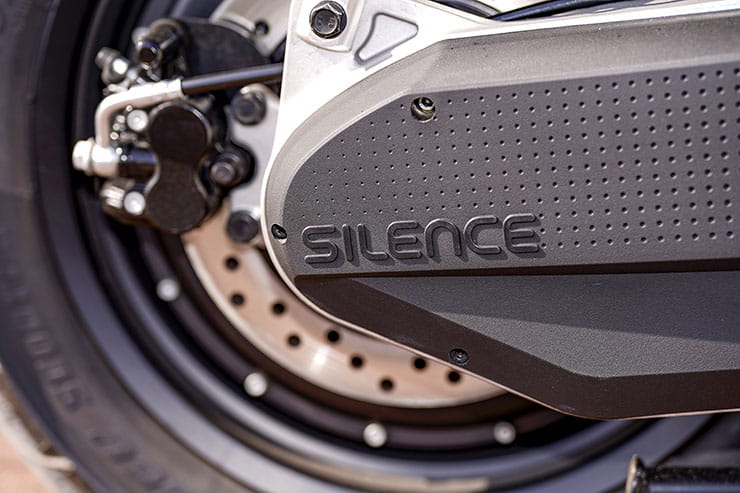 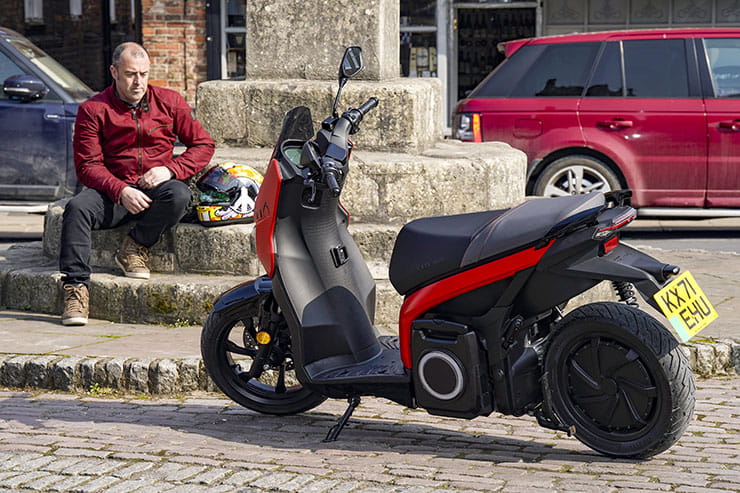