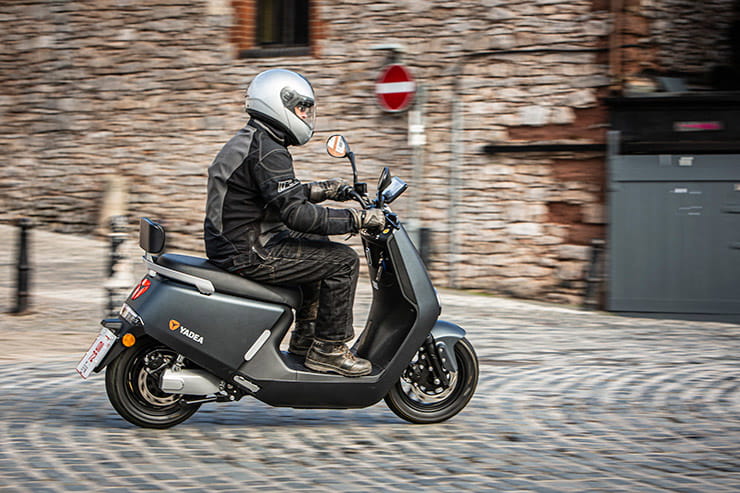 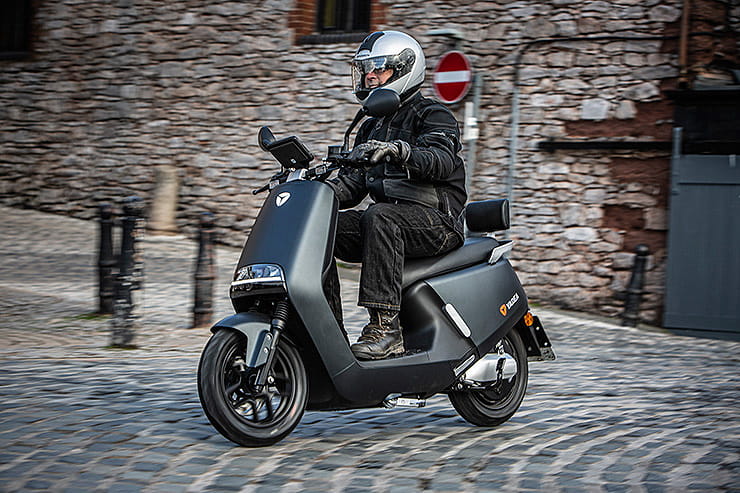 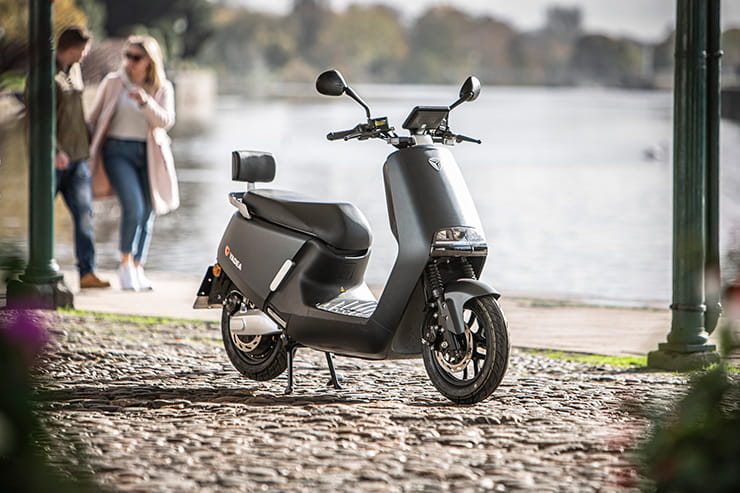 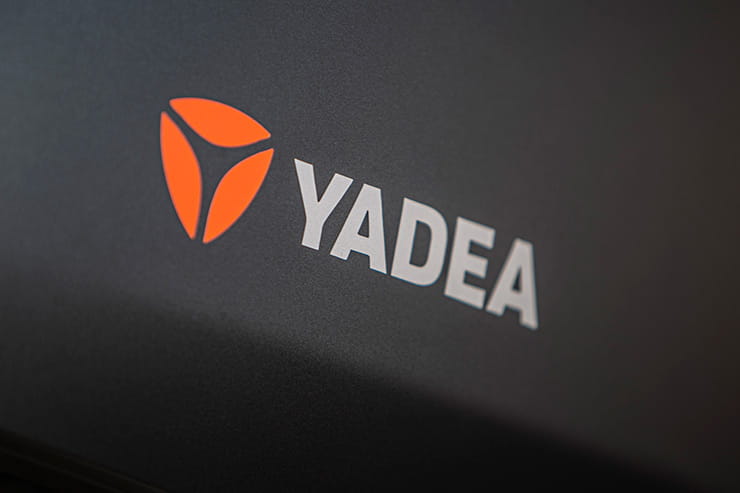 Lexmoto has jumped into Britain's fast expanding electric two-wheeler market four new models, three of them scooters. Despite its status as the market leader in Chinese 50s and 125s, it's taken the Exeter-based importer quite a while to go battery-powered. The good news is that all three scooters uphold the key Lexmoto traits of a keen price and big dealer network – all promise an easy ride and low running costs. The sports look Impulse and plainer E-Lex come in at a whisker under £1700, and we tested the range topping Yadea E5 which costs £100 more, with the 20% OLEV grant already knocked off. So, a good pedigree, but is the Yadea any good?

Price has always been a Lexmoto selling point, and the Yadea is no exception – apart from its stablemates, the only electric scooters we could find under £2000 were the Niu U-Pro (which lacks scooter bodywork) at £1895 and the Lifan (older, more basic) for £1999.99. The Yadea is cheaper than both, at £1799.99, partly thanks to the Government's OLEV grant, which takes 20% off the price. Other electric scooters are well north of £2000. 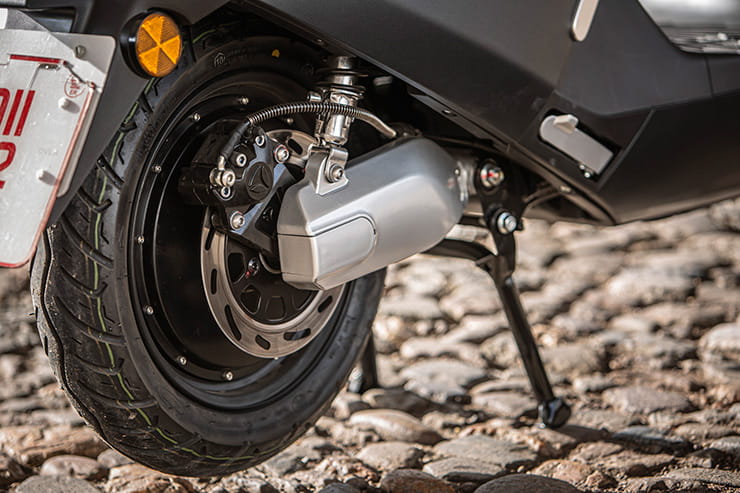 Electric scooters use the same licence categories as their petrol counterparts – AM (moped), A1 and A2. The Yadea is squarely in the moped class, so it's limited to 28mph and 4Kw max power (it actually makes 2.3Kw). On the plus side, it can be ridden by 16-year-olds after they've passed CBT, theory and practical tests. If you're old enough to have passed your car test before 1st February 2001, you can ride a Yadea without so much as a CBT.

The Yadea's 2.3Kw motor is mounted in the rear wheel, so there's no need for any sort of transmission – not only no clutch or gears, but no CVT pulleys and belts either. That's the beauty of electric motors – with full torque from almost zero revs, they don't need transmission. So while the Yadea might only muster a few bhp it has enough torque for a reasonable getaway from the lights – fast enough to keep up with urban traffic anyway. The throttle is either on or off, so take off is a bit jerky until you get used to it, but once underway the scooter smoothly accelerates up to 29mph, with an indicated 30mph downhill. As ever with mopeds, it's not quite fast enough on suburban roads, but they're all like that. 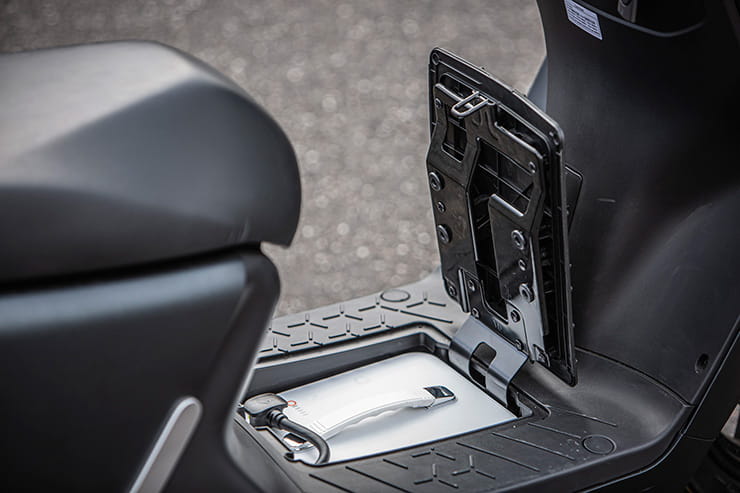 Lexmoto claims a range of up to 55 miles, but 'up to' are the operative words – with a 50 kilo rider at bicycle speeds helped by a tailwind, maybe. After 22 miles of typical town riding, much of it maxed out at 29mph, the test bike showed 38% battery left, so it was heading for a realistic range of about 35 miles. Not up to that 55-mile claim, but still enough for in-town shopping and commuting. Charging is from any three-pin domestic socket and takes 6.5 hours from flat to full. The battery lives under the floor, and is quite easy to lift out for charging indoors, which is handy for those who have to park on the street. It also has a decent three-year warranty, extendable to five years at extra cost.

This is a lightweight moped on 12-inch wheels, so it won't be a pin sharp handler, but it's nippy enough. The Yadea weighs only 86kg, its Yangxin tyres grip well and it's easy to weave in and out of traffic queues. Both front forks and the twin rear shocks (which are pre-load adjustable) are very soft, so you get some fork dive on heavy braking and potholes are best avoided, always the way with small-wheeled scooters anyway.

Unlike bigger scooters, new mopeds aren't required to have linked brakes (and certainly not ABS) so for some of us it's like going back in time to find two independent discs, front and rear. The rear locked up quite easily on damp tarmac, but learn to balance them together and they work well, with plenty of power for the Yadea's performance.

The upside of that soft suspension is that the Yadea is very comfy by moped standards. It feels almost plush, thanks in part to a seat of generous size which is big enough for two and even has a pillion backrest. As for weather protection, it's pretty good by moped standards, some of which have skimpier bodywork than this, though I'd like the option of a screen. 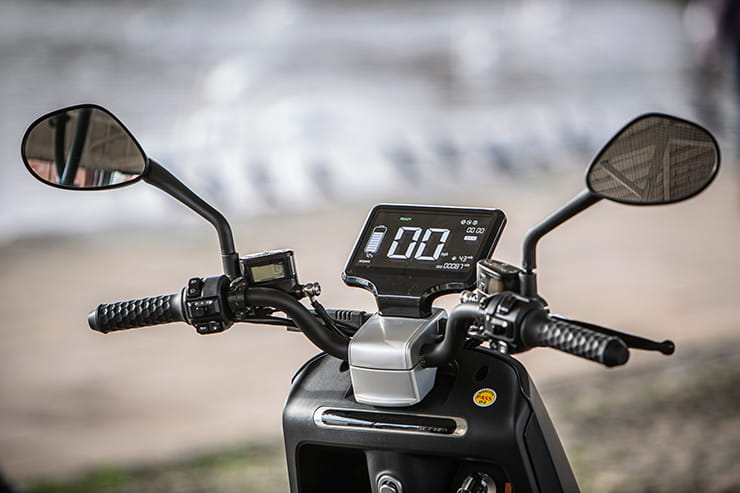 The best rider aid is immediately obvious – the Yadea's dash is a big tablet-sized thing, and one of the clearest I've ever come across. Ignition on, and a giant 'P' lights up; press the P switch to get out of park mode and you're good to go, with a big speedo and battery gauge, the latter showing both graphic segments and % charge, which falls nice and steady as the miles tick by. There's also a clock, estimated range left and an odometer. The dash appears to offer bluetooth connectivity, but UK buyers won't have the app, at least not yet. Otherwise, Yadea riders get standard switchgear, LED lights, and security is limited to a steering lock.

More bonus points here. Some electric scooters use up valuable storage space with battery, but not this one. With the battery neatly sitting under your feet, there's a good-sized underseat space, easily big enough for a full-face helmet plus a few bits and pieces. Two little cubbies upfront are big enough for a phone and sundries, plus there's a shopping bag hook.

Is electric worth it?

For scooters, especially mopeds, going electric is fast becoming a no-brainer, as long as the range is sufficient for what you want. They still cost more to buy upfront, but thanks to the OLEV grant, the premium is less than it would otherwise be. Lexmoto's Impulse electric scooter costs £400 more than the equivalent 50cc Nano, which sounds a lot. But a regular rider would recoup all that over time in not having to buy petrol, oil and filters – servicing is limited to tyres and brake pads, and a full recharge costs about 25p at domestic rates. And with the National Grid increasingly powered by renewable energy, this really is the greener option.

If you want an electric moped, the Yadea is a good choice. It's got a useable range, plenty of storage space and should cost peanuts to run. It also feels quite sophisticated, not built down to a price, and that's despite being cheaper than the opposition. What's not to like?