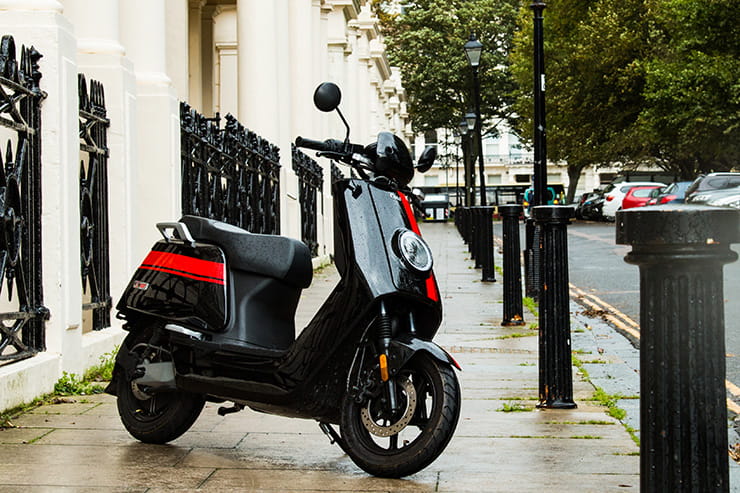 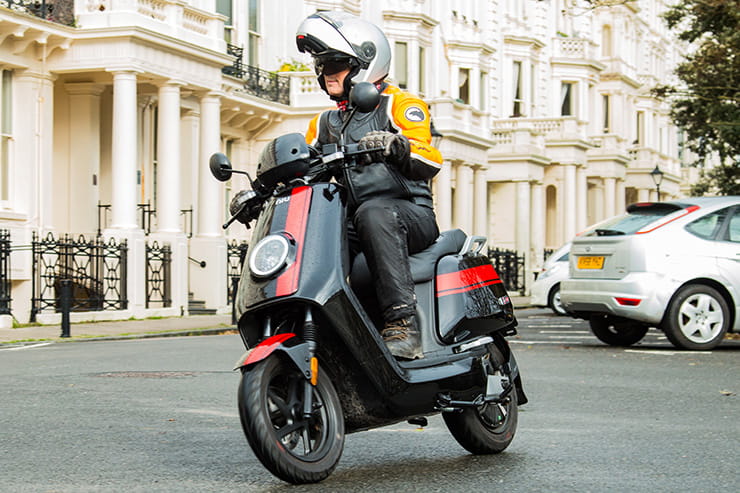 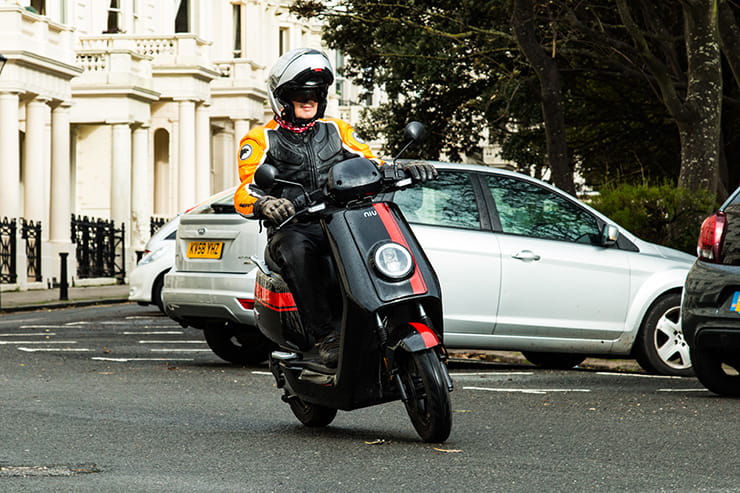 There's more to electric vehicles than Zero, Tesla or the Harley-Davidson Livewire. In fact, if it's a scooter you're after, there's plenty of choice, from the weediest of mopeds to BMW's C-Evolution. Until recently, there wasn't much in between, but the last year has seen a few faster (as in 40-60mph) electrics launched, more like 125s rather than 28mph mopeds. We like the look of the Super Soco TC Max (neat little motorcycle style e-bike) and Vespa has just launched a 45mph version of its Elettrica, which will be cool, but not cheap.

Electrics have their sceptics but battery power is arguably more relevant to scooters and small motorcycles than big ones. These smaller bikes generally get used for shorter commutes and shopping so range isn't so much of an issue. Clean, efficient running in heavy traffic is one of the biggest advantages of electric power – again, natural small bike territory. And owners are usually looking for bargain basement running costs, something else which battery power offers.

The Niu claims to be the world's top selling electric scooter, with over 400,000 on the roads so far, and the basic moped version has been on sale in the UK for a couple of years. The GT is the higher-powered version, with a 3kw motor (in place of 1.8kw) and bigger twin batteries, which ae removable for charging. It's also a clever little beast, with full Bluetooth connectivity, and claims a 66-mile range with a 50mph top whack.  Which all sounds great in theory... does it work out in practice?

The Niu N-GT is eligible for the Government's Plug-In Car Grant (despite the fact that it's not a car) which knocks 20% off the price and brings it down to £3196 outright (plus OTR), or £73 a month on finance. Its closest rival is likely to be the Super Soco CPx, due in early 2020 and costing £3599, though that claims an 85-mile range and 55mph, thanks to a bigger battery. When it arrives, Vespa's 45mph Elettrica is likely to cost over £7000, so if you want one of those, you'll have to really, really want one.

Work out your current travel expenses then see how much you could be saving with a Niu. 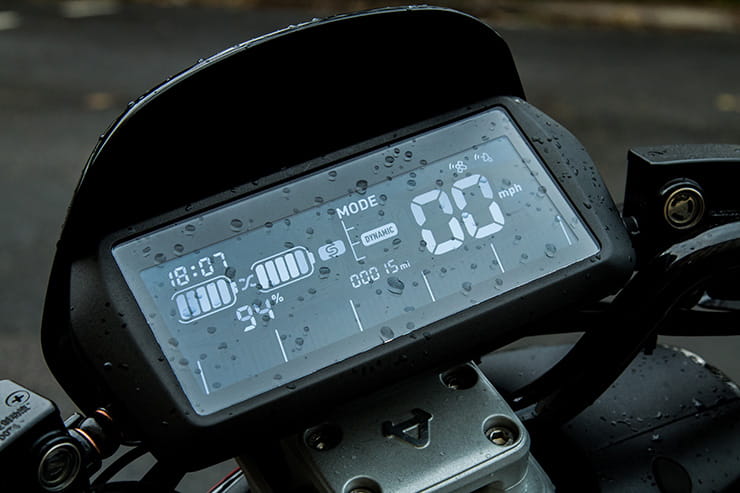 There's no special procedure to hopping onto the Niu and getting going – you just switch on the ignition, press the green ready button, and you're good to go. The green button is a good idea, because there's no engine idling away to warn you that the twist grip is live once the ignition's on.

The Niu's 3kw motor translates into just 4bhp, which doesn't sound that great, except that it has that usual electric motor trick up its sleeve – lots of torque from virtually zero revs. So even in Dynamic mode, which limits speed to 28mph, acceleration is reasonable. Switch to Sport, and you get instant response, the scoot nipping up an indicated 50mph pretty quickly. Picture the scene; waiting at a red light on Brighton seafront, two fast food scoots pull up alongside. Green light, all three of us nail it, and the Niu had no trouble keeping up. The weird thing is that it does all this in complete silence, with not a hint of milk float whine. If you've never ridden an electric bike or scooter in traffic, it feels serene as you glide past the coughing, spluttering cars, and you soon get used to sitting in silence while waiting for the lights to change.

Sticking to 28mph mode will save some power, but you've got the usual moped problem of top speed not being enough to hold its own in 30 limits, though it does at least keep that speed up on hills, unlike some 50cc scoots which wilt at the sight of an incline. But to keep up with the traffic you really need to keep it in Sports mode all the time, so apart from a couple of experimental miles at moped speeds, that's what I did.

There's not much to say here, for three reasons. First off, the Niu has no gearbox – the motor is mounted directly in the rear wheel – and obviously there's no exhaust either. Finally, the electric motor is a 3Kw Bosch unit and...err, that's it. And that's the disappointing thing about electrics – no valves, cams or oily bits to discuss. Hey ho. 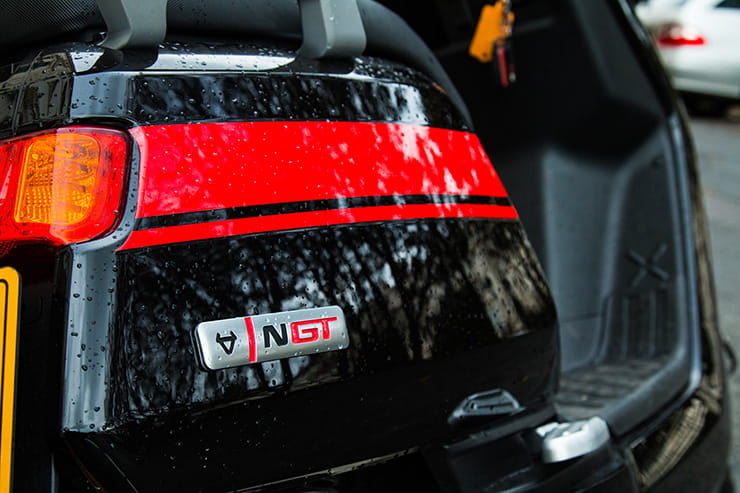 Now this is more interesting, because for most of us it's the million-dollar question for electrics – how far will it go on a charge? Manufacturers' claims aren't always the best guide to these things, and Niu claims 60 miles. Which as it turns out, is about right, even slightly pessimistic. After 44 miles of mixed running, partly in town and partly flat out, the GT had used 65%, so it was heading for about 65 miles. If you're really keen on eeking out the mileage, a green 'Eco' lights up on the dash, but only if you're being very careful...

There are two 35ah batteries, one under the seat, one under the footboards, and both can be lifted out (they're about the same weight and size as a car battery) for charging, or done in situ. There's just one multi-pin plug for each battery, so no messing around with spanners and terminals. The standard charger will feed both at the same time, and Niu reckons a full charge will take 3.5 hours, so there's no Tesla-style 30 minutes and you're done, though like any electric they can be topped up at any time. And as this is relatively slow, low tech charging all you need is a three-pin socket, no special charge point. Finally, the battery warranty goes to three years/20,000 miles, so plenty of scope for commuting there.

Chassis-wise, it all looks a lot more conventional. The Niu has a steel frame clad in plastic panels, with non-adjustable forks and twin rear shocks with pre-load, on 12-inch wheels. In other words (and you can see this coming) it handles like any other small scooter. It's quick steering and manoeuvrable in town, but the short wheelbase and small wheels make it twitchy over bumps, even with the pre-load on its softest setting of five.

Being basically foolhardy (and trying to run the battery down) I did ride the Niu along the clifftop coast road from Brighton over to Rottingdean, which must be very scenic in good weather, but on test day white-topped breakers were smashing over the beach and a gale force wind was whipping off the Channel and across the road. The Niu was blown about like a will o' the wisp, but I think anything else on two wheels would have been as well. We made it back intact anyway. 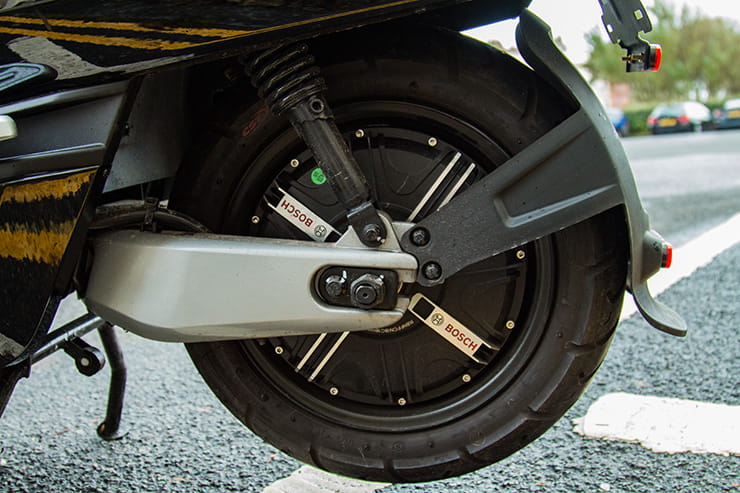 The GT counts as an A1 scooter, so you get linked brakes, both controlled by the left-hand lever, though there's also a right-hand lever for extra urge if needed – they're very good just on the one lever, strong enough to provoke a little chirp from the rear Chen Shing on dry tarmac. Squeeze gently and the regenerative braking kicks in, putting a small amount of power back into the battery – it's not the stuff of perpetual motion, but every little helps. Ride smoothly enough and you'll never have to replace any pads...possibly.

Well, let's forget the touring bit, but if you were to spend a long time on the Niu, it wouldn't be too bad. The seat is comfy and the riding position neutral and upright, though the long-legged will feel a tad cramped. A little fly screen helps a bit at speed (though it's no match for Brighton gales) while passengers get a smallish portion of seat, decent pegs and good, big grab rails.

The Niu has quite a bit of this. First off, the dash looks complex but is a fine example of lots of information, simply displayed. There's a speedo, clock and the all-important battery gauge in both segments and a nice steady percentage. Plus, the amount of regen, power mode and connectivity status. Talking of which, one of the Niu's selling points is that the Bluetooth is built in, so you can link it to your smartphone to show GPS, an anti-theft alert/alarm and real-time diagnostics. Away from all this clever stuff, the Niu isn't so hot on convenience features as the under seat space is fully taken up by battery, so the only place to put stuff is a hook to keep a bag between your legs, and a cubby in front, though it is deep enough for a phone. 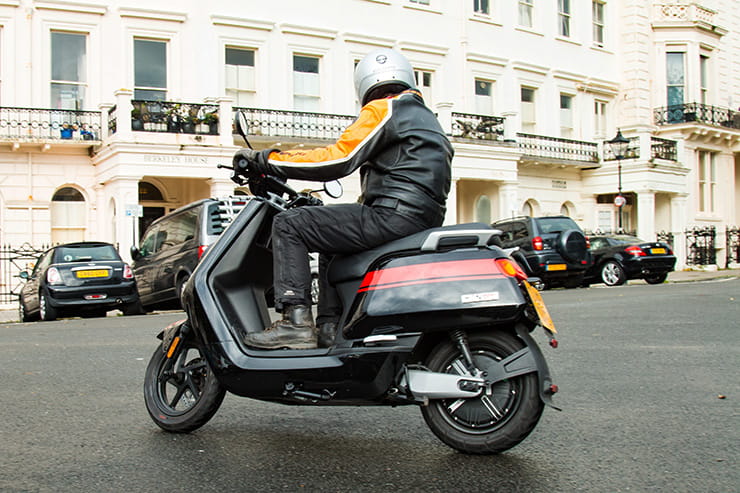 The Niu might not suit everyone, but there's much to recommend it. It's clean, neat and fast enough to hold its own in city traffic, only losing out to a 125 over 50mph. Yes, it costs more upfront, but a few years of commuting will pay that back. If you're facing an urban commute, going electric looks like a no-brainer.