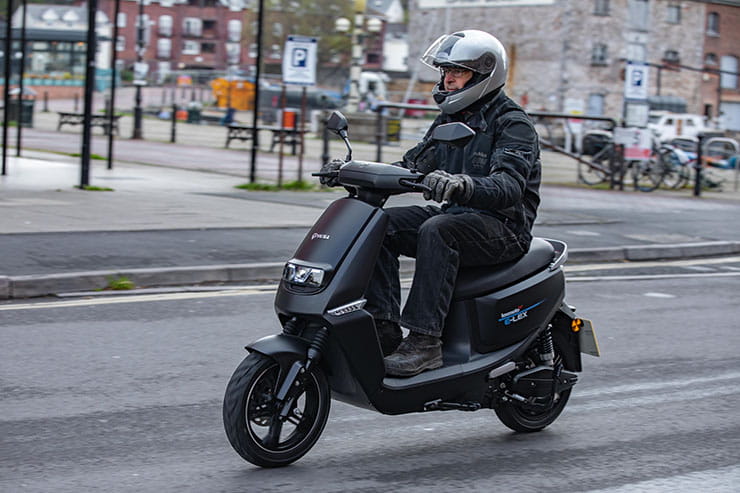 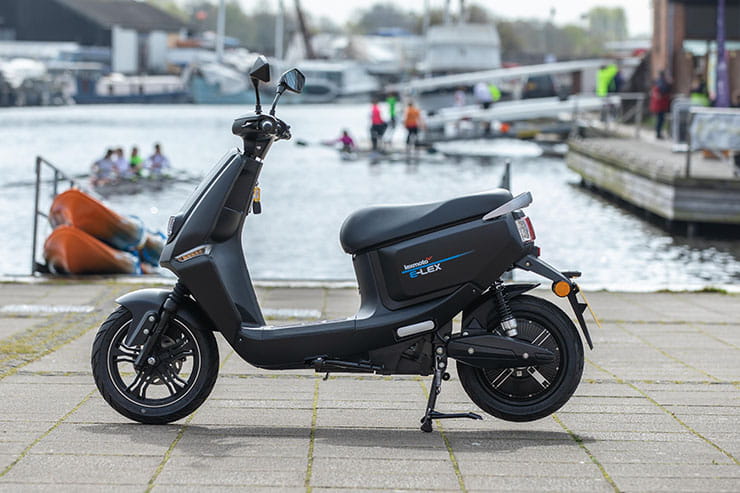 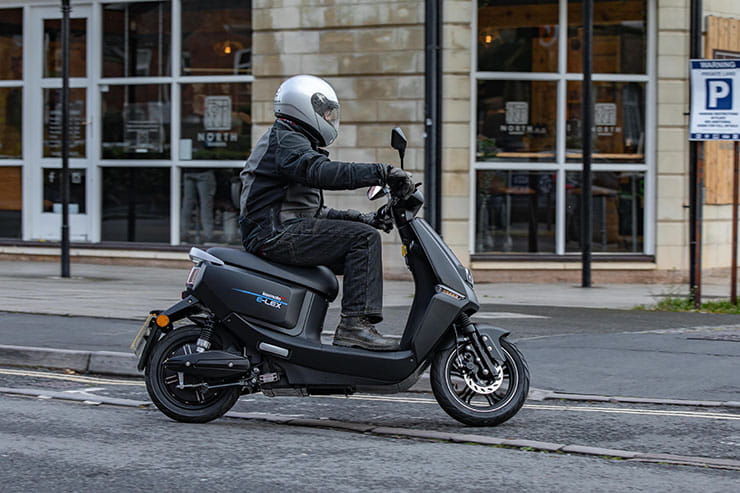 You hear the phrase 'tipping point' a lot these days, usually in the context of climate change. Well, it looks like the UK moped market has reached its very own tipping point, as in February 2022 over half of new mopeds registered were battery-electric, not 50cc petrol.

The canary in the coalmine is Lexmoto, which now offers only three 50cc scooters, and four electrics. The reasons aren't hard to find. Battery range isn't such an issue for mopeds, which are used almost exclusively for short trips in town, and the cheapest e-mopeds are now little more expensive than the cheapest 50s.

The Lexmoto E-Lex is a case in point, costing just £150 more than the cheapest 50cc scooter from the same stable. Compared to that one, the E-Lex promises lower running costs, easier riding and quiet, clean running – does it work out on the road?

At a penny less than £1800 (after application of the OLEV government grant), the E-Lex isn't actually the cheapest e-moped you buy. That honour belongs to the Super Soco CU Mini which costs £100 less. The Niu Nqi comes in at £1996. All three have minimal bodywork, a simple spec and batteries which can be lifted out for recharging or plugged in as they are.

This is urban transport at its most basic, one step up from an electric bicycle or a stand-up scooter, so don't expect much in the way of luxuries, but the E-Lex should provide a cheap and convenient means of getting from A to B. 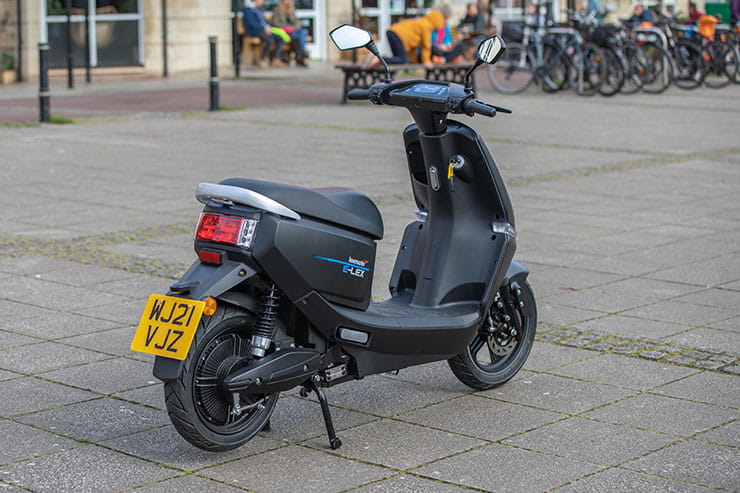 The E-Lex's rear hub motor (which fills the rear wheel) produces 1.5Kw, which is well short of the AM licence limit of 4Kw, but what you would expect. Translated, that's around 2bhp, but of course it does have the instant torque from a standing start for which electric motors are renowned.

This is good news, because if you've filtered to the front of a fuming queue and your top speed is limited to 28mph, you'll want to get safely away from the cars when the lights turn green. The E-Lex does that well, about as fast as Lexmoto's A1 class LX08 electric scooter up to about 20mph, though acceleration is then slower up to an indicated 28mph, which it happily holds on the flat. As ever, 28mph isn't really enough in free flowing 30-limit traffic, but that applies to all mopeds.

Like many e-mopeds, the E-Lex has a slow mode, in this case 15mph, which in Holland would allow you to use cycle tracks, but not here in Blighty, where a moped is a moped. Otherwise, it's as smooth and quiet in 'fast' (it's all relative) mode as you'd expect.

Rear hub motors are becoming universal on battery-powered mopeds, because they do away with the need for a chain or belt, which is yet another thing which won't need servicing. The air-cooled motor looks identical to countless others which are already powering scooters all over the world – nothing else to say about it, except that it's quiet and it works! 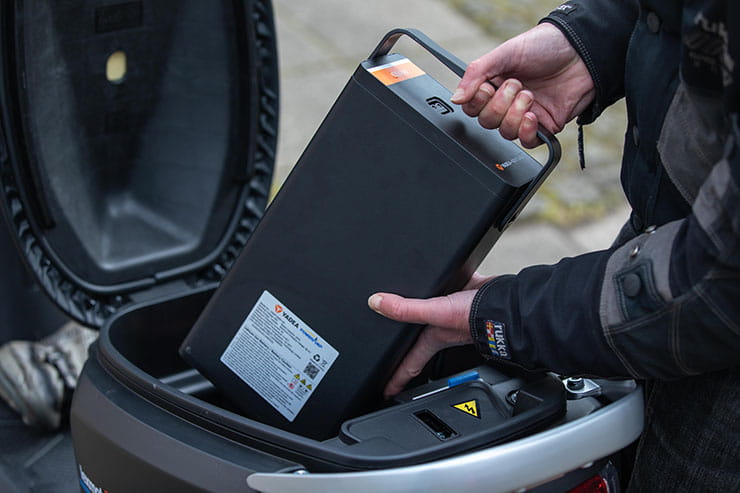 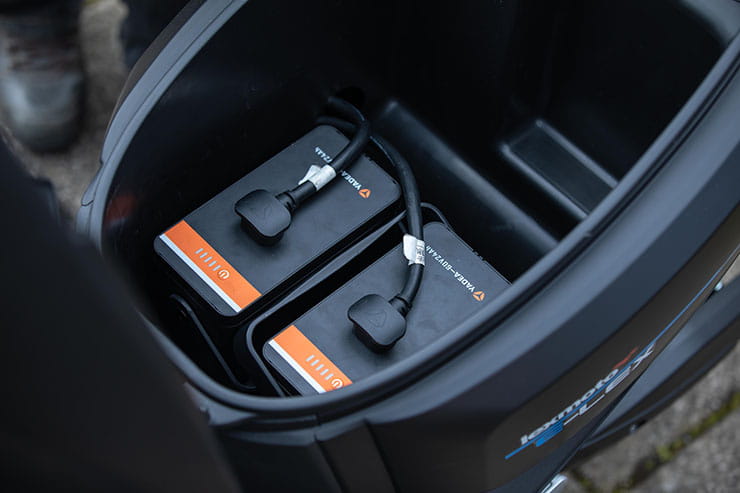 Lift-out batteries are another must-have for any electric moped, saving the bother of charging outdoors if you don't have a garage or (even worse) have to run an extension lead over the pavement. The clever thing is that the E-Lex has two small 1.44kwh batteries rather than one big one. They aren't lightweight, but they're a whole lot easier to haul out than a single 2.88kwh pack would be – they weigh 10.5kg each, which is like a heavy carrier bag of shopping. They can also be charged in situ via a socket in front of the seat. And of course there's no searching for a fancy charger because the E-Lex will charge (albeit slowly) from any three-pin socket.

Now then, range. The twin batteries are in series, so when one goes flat you have to stop, hop off, open the seat and switch over, like the reserve fuel tap on an old motorcycle. The first battery could manage only 13 miles but the second did 22, so it's likely the first wasn't topped right up on the test bike. With both batteries starting at 100% a 40-mile range looks reasonable, quite a bit less than the 'up to' 55 miles claimed by Lexmoto but still pretty good by battery moped standards.

Limited performance means a simple and cheap chassis can cope fine, and so it is with the E-Lex, but it's good to see pre-load for the twin rear shocks, so that in the unlikely event of taking a pillion on board, they can be accommodated. What matters is that the little scoot feels well within its limits slipping through town. It's lightweight (only 70kg) and very controllable, though watch out for a sudden throttle response at low speeds, the price for that snappy acceleration. Tyres are 80/90 12-inch Kendas, which do what they should. 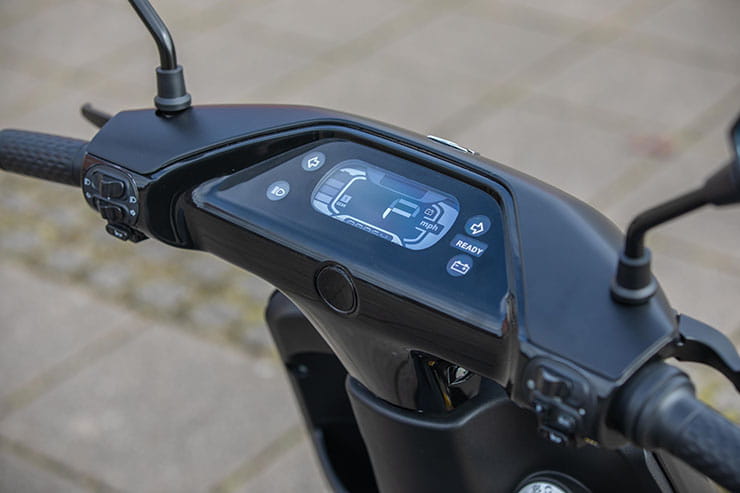 The E-Lex's brakes hark back to an earlier era. Not only are they not linked but the rear is a cable-operated drum. Takes you back, it does, but not with fond nostalgia as they're not very good, both feeling wooden and lacking power. There's no clever regen (regenerative braking) to put power back into the batteries either, but you wouldn't expect that at this price.

The E-Lex is physically small, like most mopeds, but the upright riding position is good enough for commuting, including riding round and round the outskirts of Exeter trying to flatten the second battery... The seat is big enough for two, as long as neither of you have eaten all the pies, and the pillion gets a decent grabrail – even so, giving your mate a lift to work will devastate the performance. 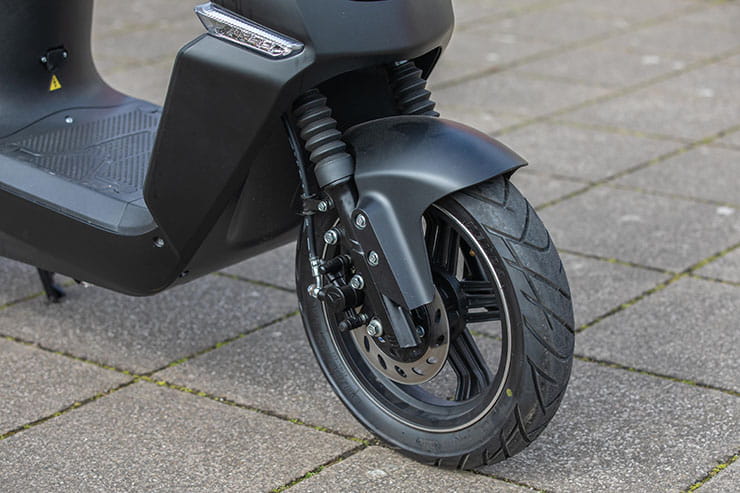 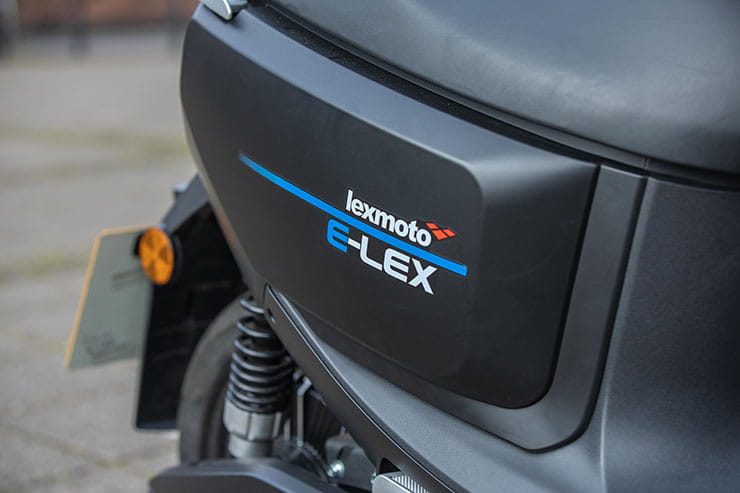 Many e-mopeds (including the cheaper Super Soco CU Mini) are Bluetooth enabled, linking to your phone for security features and the like. The Lexmoto is more old school, with a good old-fashioned key and steering lock, though it does have an alarm on the remote as well. The dash is as simple as you'd expect, with a big speedo and battery meter, but the latter is a bit crude, with four big segments which come and go according to whether the motor is at rest or working hard. What we really need is a % meter which gives a steady reading, which is common on other e-moped. Oh, and the dash warning lights are so dim that they're almost invisible.

One big plus of the E-Lex – rare for an electric scooter – is that it has some underseat space on top of the batteries. Leave the charger at home and you've got enough room for shopping.

In some ways, the E-Lex doesn't look like a good buy compared to the Super Soco CU Mini, which has decent brakes and Bluetooth and is £100 cheaper into the bargain. On the other hand, Lexmoto's offering has nearly double the range, good low speed acceleration and loads of dealers. Take your pick. 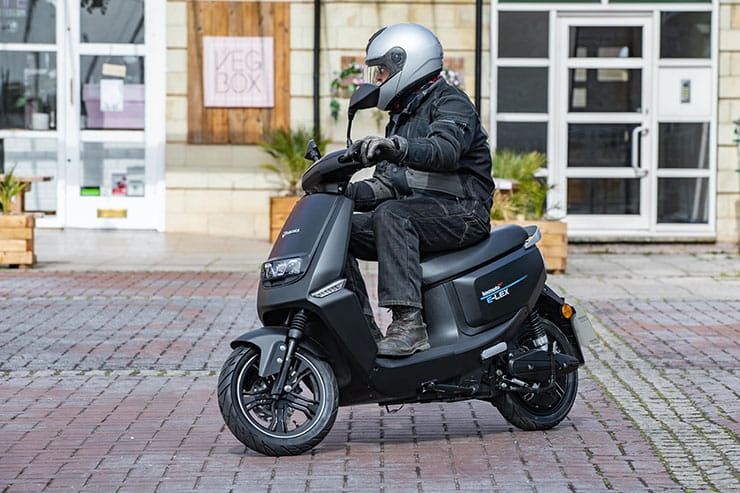