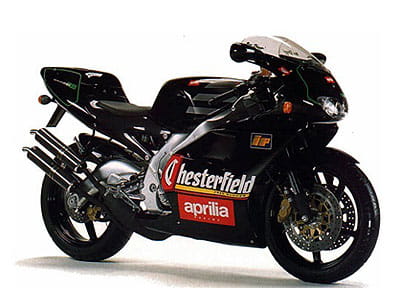 Talk two-strokes of the late eighties and early nineties and Aprilia will crop up in conversation. In particular the RS250, a machine built essentially to pay homage to its MotoGP (formerly known as 250cc Grand Prix) machinery that paved the careers of Valentino Rossi, Max Biaggi and countless others. But where the racing bikes were all-Aprilia construction, the RS250’s engine was a 249cc RGV250 unit from Suzuki.

Typically two-stroke, the RS250 needs to be warmed thoroughly before being given its head otherwise it is prone to cold seizures. Listen carefully to the top end of the RS250 and if it rattling noises are heard at tickover then be prepared for a top end overhaul. Apart from the usual two-stroke foibles, the RS250 was a very adept performer. No two-stroke pulls like a train until it reaches higher revs but the RS250 wasn’t so bad because Aprilia reworked the barrels and designed the exhausts to add a bit more top end go as well as prop up the mid-range.

Aesthetically, the RS250 never shone as bright as the RGV250 but in every other area it outshone the Suzuki. The lightweight nature of the beast meant it could be chucked around without care and could easily run amok amongst 600cc four-strokes on a back road boogie.

Of course, being of 250cc capacity, the RS250 was craved by younger riders eager to sample the smell of burnt two-stroke oil and race-like performance, which the RS250 had buckets of. Unfortunately that’s mostly as far as their attention went. Most RS250 bikes went the way of slugs in the way they frequently crept across road surfaces and often ended up not looking good for the experience.

Just looking at the RS250 tells you it is the genuine race-replica of the two-stroke world. Unfortunately, the 250cc market was on its knees and high running costs along with emissions compliance issues meant the RS250 was a marked bike the moment it left the factory.

Aprilia’s spare parts system wasn’t brilliant when the RS250 was new and it isn’t much better now for this particular bike. If buying one is priority then look towards stroker clubs for plenty of advice on owning and maintaining a RS250 – you could need it.

- points – it’s a two-stroke and fickle with it. Original and high mileage models won’t have a lot of time left