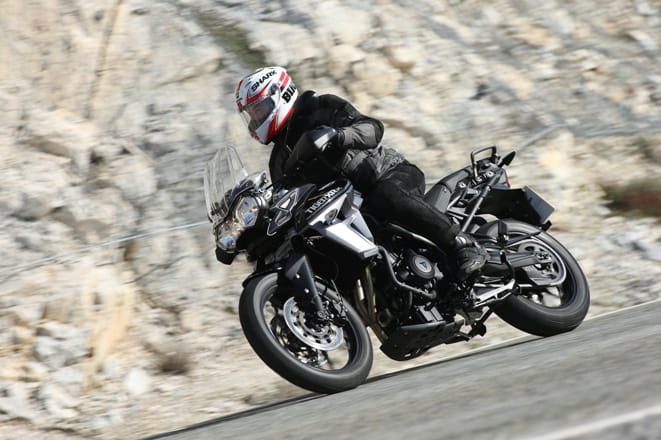 One of the four new Tiger 800 models to be released for 2015 by Triumph is the XRx and we were invited to the world riding launch near Marbella in Spain to be among the first to ride it.

The outgoing Tiger 800 and XC were launched in 2010 and have been a best-seller for Triumph ever since so the new four model range is going to have to impress to measure up to its predecessor. Effectively the original 800 is now called the XR while the XC, the more off-road focused bike, is still called the XC. Across the range it's the technological refinements which help bring it in line with its rivals with the addition of standard fit traction control and switchable ABS on all four models, while the XRx and XCx, which we rode yesterday, get cruise control and three riding modes to control throttle maps, ABS and traction control.

For an overview of the range and the difference between each model, click here. 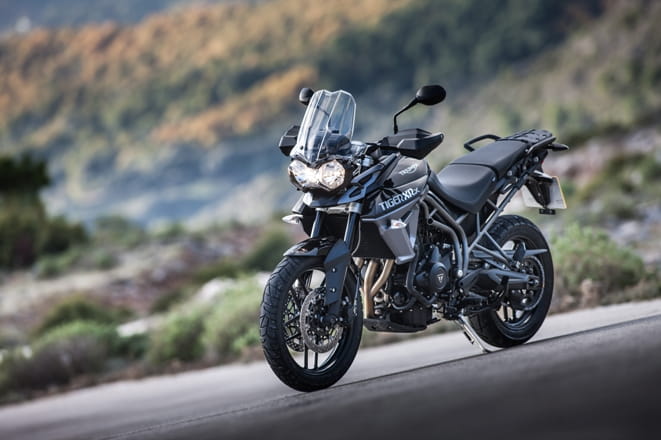 The differences between the XRx and XCx seem subtle at first but look a little closer and they become apparent depending on the bias of the bike. The XRx is the more road-focused and therefore was designed and built so. It has a shorter wheelbase (15mm), it's narrower (12mm), lower (40mm) and importantly its seat height is 30mm lower yet still adjustable with a range from 810 to 830mm. There's an lower seat option which reduces the height by a further 20mm lower should you select this option from the 70+ accessories available on all the models.

I say 'importantly' because during the 120 miles covered up and down the Ronda road in Southern Spain on the press launch, I spent time with the adjustable screen in various positions but at 6ft tall felt like an outsider to those either taller or shorter who didn't seem to suffer with the buffeting. This wasn't apparent on the XCx because it's a taller bike with a higher seat so the position of my head was more suited. 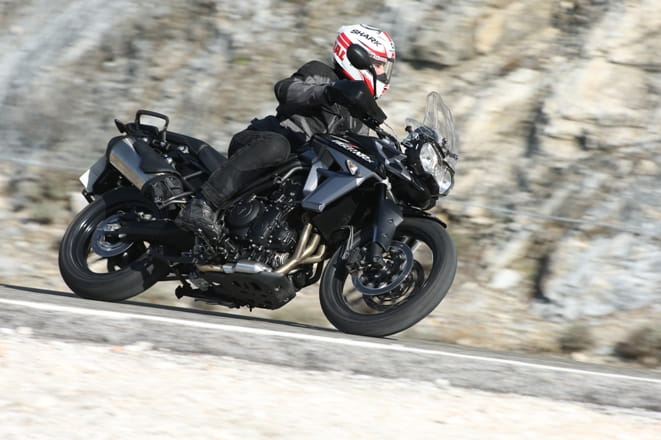 Back to the differences. The XRx is 5kg lighter than the XCx although it's barely noticable, the bulk of that weight is saved through the lack of engine protection bars. The suspension differs too; Showa forks and mono shock adorn the XR models which have 40mm less travel on the front and 45mm less on the rear and while these make the bike stiffer in the corners, they of course don't soak up as much of the imperfections in the road. That said, the XRx is a fine specimen of an adventure bike designed for road use, it's balance under acceleration, heavy braking or banked over in a corner is worthy of praise.

Cast aluminium wheels on the XRx, the front of which is 2" smaller than the XCx, also set the two bikes apart and increases the XR's ability and agility on the road. The XRx is shod with Pirelli Scorpion Trail tyres and they offer a confident feel on the brakes and if you're carrying enough corner speed to get the foot pegs scraping along the ground. Easily done by the way, perhaps too easy.

The beautiful roads on which we tested the bikes are a popular choice with manufacturers and give riders the option of pushing the bikes capabilities. 2nd and 3rd gears, high in the rev range allows you to take in the glorious howl of the three-cylinder 800cc motor, redefined since its first incarnation for greater efficiency. The engine and gearbox enhancements are also both noticeable and commended. Slick changes and smooth throttle response, even with the slightly more aggressive sport map, thanks to the ride-by-wire technology also introduced in this upgrade. 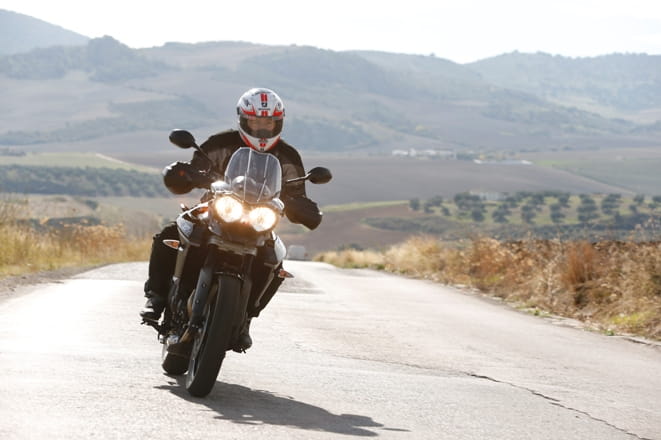 94 bhp and 58 ft.lbs of torque to propel 216kg of prime British bike is not necessarily a recipe that will make the hairs on the back of your neck stand on end but Triumph have worked wonders with the new generation of their power plant, it is a superb motor full of enthusiasm all the way through the rev range up to the red line just below 10,000rpm.

The seating position on the XRx is lower than the XCx and after 100 miles you're ready for a stretch. The riding position is supposedly more suitable for road riding but I felt the distance between hip to foot and also the width of the saddle more comfortable on the XCx. 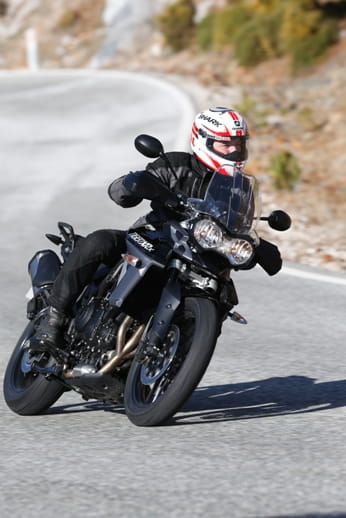 Cruise control is a real benefit and easy to use. Activated by using an on/off switch next to the throttle then controlled by a toggle button to set/re-set increase and decrease, all of which is displayed on the dash but be warned, it only works in 4th, 5th and 6th gears.

MPG is said to have increased by 10 up to 65mpg and with its 19 litre fuel tank then you could be looking at 250 miles between visits to the petrol station.

Overall, the XRx was designed for road use and it's an example of how the adventure bike market is not only continuing to grow in popularity but also diversifying. BMW launched the S1000XR because their all-conquering R1200GS was too 'adventure', so they built a bike for the road with a mighty great 160bhp yet the aesthetics of an off-roader. They call it a 'Sports Adventure'. Triumph meanwhile, have been playing in this sector for five years with the mid-capacity tourer that looks like an adventure bike and with the new models they've taken existing success and found ways to a) make them far superior, and b) to look at how the sector is dividing buyers by offering two further models with bias toward either road or off-road.

If you're 6ft tall and don't spend all of your motorcycling miles on road surfaces similar to Silverstone then buy the XCx. Sports tourer, adventure tourer, call it what you will, the XRx is a top quality bike with all the right attributes for all types of riding but the XCx is just that little bit more of an all-rounder. And they're both less than £10k. 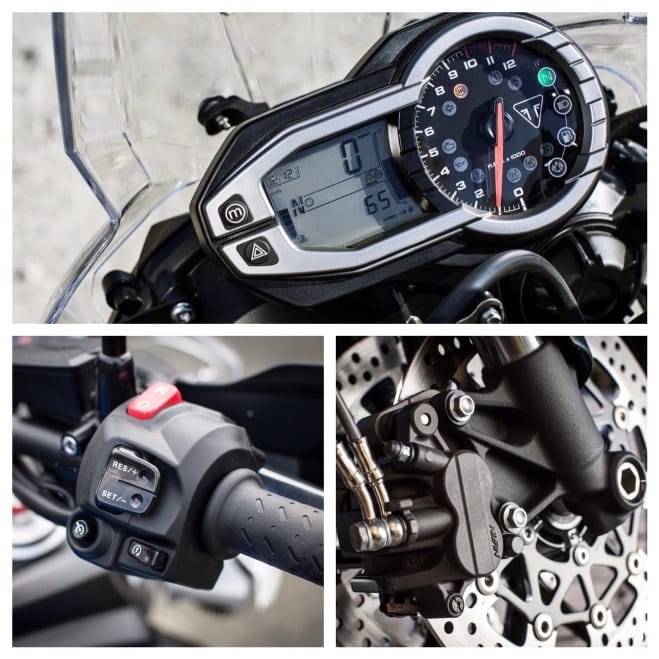 Triumph has confirmed the prices and availability on all four models: