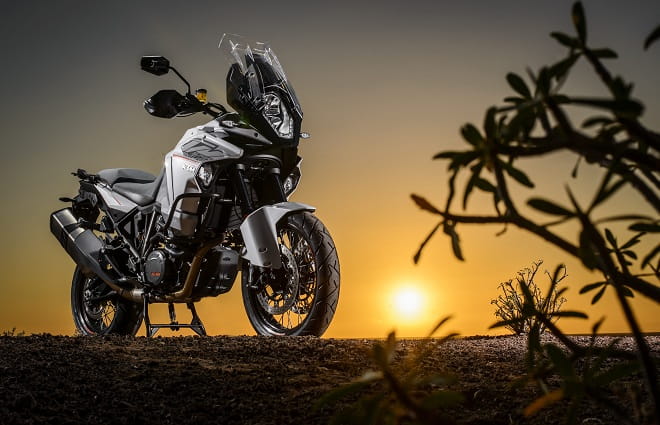 “Okay, now for the second lap,” grinned the guy in the KTM jacket as I pulled up outside the launch base hotel on Gran Canaria with the sun going down after a day spent mostly hacking round a few hundred hairpins on the 1290 Super Adventure.

What a shame he was joking, because if ever there was a bike that would make any rider want to go back for more it’s KTM’s new go-anywhere flagship. After all, we’d covered about 130 miles so there was still fuel left in the big tank, it wasn’t yet dark enough to test the innovative cornering headlights properly, and the seat wasn’t even beginning to feel uncomfortable.

More to the point, the Super Adventure is just so brilliantly fast, grunty, sweet-handling, well-braked, rider-friendly and generally fun to ride that it had made the generally twisty, occasionally cold and badly surfaced launch route not only hugely enjoyable but effortless, in a way that few bikes could have approached.

It’s not remotely surprising that the Super Adventure is special. After all, it’s essentially a marriage between the 1290 Super Duke and 1190 Adventure, both of which are outstanding bikes, with added wind protection, even more clever electronics and some luxury features thrown in. 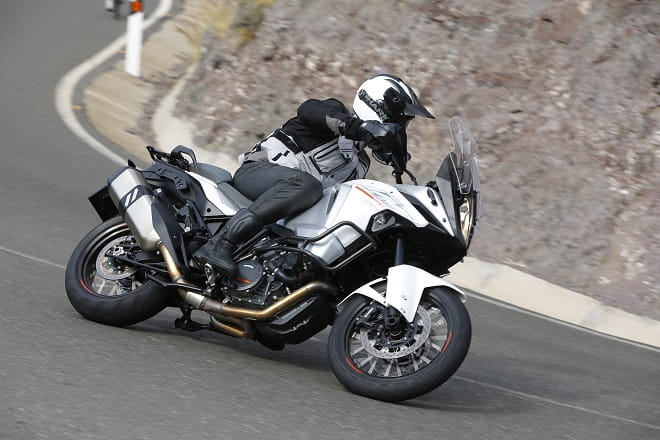 The Super Duke donates its engine, a 1301cc, 75-degree liquid-cooled V-twin that is remarkably grunty and refined in the super-naked bike and even more so in the Super Adventure. For this 1290 it’s detuned by 20bhp, via smaller intakes and reshaped combustion chambers, but that still leaves a hefty max of 160bhp at 8750rpm.

A 2kg heavier crankshaft helps make the Super Adventure smoother at low revs, and it also gets a taller top gear for lazier cruising, plus cruise control as standard fitment. Like KTM’s other V-twins it has four riding modes: Sport for full performance, Street for slightly softer deliver and earlier traction control activation, Rain for 100bhp max and early traction control intervention, and Off-Road, which also gives 100bhp and allows controlled sliding.

The chassis is based on the same tubular steel frame and aluminium swing-arm as the 1190’s, but the Super Adventure combines those with KTM’s first semi-active suspension system. The WP rear shock and 48mm forks have push-button adjustability through four settings (Sport, Street, Comfort and Off-road), which are independent of the riding modes.

Despite its white rather than orange paint the Super Adventure looks very much a KTM, but it’s bulkier than the 1190, mainly due to the big, 30-litre tank that is wide enough to act as fairing lowers. The slim fairing itself is topped by a large screen that is adjustable with one hand once you’ve unlocked it, which can be done on the move.

Extra width apart, the new bike feels much like the 1190 at a standstill. At 229kg without fuel it’s 12kg heavier (mainly due to the bigger tank, heavier crank, and additional cornering lights and crash-bars). Its seat is slightly wider but the same height, quickly adjustable between 860 and 875mm. Its one-piece bar is slightly raised; the engine comes to life with a similarly smooth, free-revving feel and a familiar muted sound from the big single silencer.

Straight-line performance is explosive: somewhere between the crazy Super Duke and the 1190 for outright power, even more bursting with low-rev grunt than either of them, and remarkably smooth and refined for such a big, powerful V-twin. Fuelling is sublime, without a cough or splutter, and there’s so much instant urge from as low as 2000rpm that it’s almost impossible to be caught in the wrong gear.

On the twisty roads of Gran Canaria the KTM grunted out of bend after bend, ripping forward at an arm-yanking rate yet feeling superbly controllable. Despite that I was glad to have the smooth-acting traction control system (part of the Motorcycle Stability Control package that also includes cornering ABS) there as a back-up, especially on some gritty roads on which I could crack the throttle open, safe in the knowledge that the electronics would sort it all out.

The KTM was excellent on faster roads, too, including a short stretch of motorway where it sat at an utterly effortless 100mph feeling very long-legged (helped by that taller top ratio). It doesn’t have quite the rev-happy snap of the Super Duke but it ripped to 130mph on a short open stretch, with plenty more to come towards a top speed of about 160mph.

Wind protection was excellent, although for lanky (6’4”) me the screen was a fractionally too low at its tallest point, so I had to crouch very slightly to get a near-silent ride. Normal height riders (and even one even taller guy) found it outstandingly quiet. Some shorter riders found the top of the screen impeding their vision, but the mounting bracket can be reversed to lower the whole screen assembly slightly.

If the Super Adventure’s straight-line performance was impressive, its cornering was even more so. The bike’s width had led me to expect it to feel quite heavy, but the opposite was true: I could hardly believe how light it felt; hardly different to the 1190 Adventure in the way it could be flicked into tight bends, carved round feeling superbly precise, and then fired out again.

The semi-active suspension was superb: supple, especially in the softest Comfort mode, yet firming up when required – mainly at the front end under braking and at the rear on acceleration. That kept the bike feeling incredibly stable and well-controlled, given that it has a generous, pothole-smoothing 200mm of travel at each end. Even the Sport mode wasn’t particularly firm, but gave a brilliantly taut ride with just the right amount of natural feeling dive under braking.

And what brakes they are: a powerful blend of four-pot radial Brembo calipers and 320mm discs up front, plumbed with the Bosch cornering ABS system that means you can brake hard right to the apex of a turn without danger of the front washing out. There’s plenty of grip from Conti Trail Attack 2 rubber, too, and ample ground clearance to make use of it.

So the KTM is fast, flexible, goes round corners… and it’s also very comfortable and practical, at least as far as a one-day launch ride can show. It should also work well off-road, though sadly there was no chance to test that out on the launch. Standard fitment hand-guards plus heated grips and seat meant that I stayed warm when we rode high enough for the air to get distinctly chilly.

That big tank means most riders will get a realistic range of well over 200 miles even if hard riding brings consumption down to about 35mpg, as it did on the launch. If you’re gentle you’ll get over 250. A luggage rack, pannier mounts and pillion hand-holds are built in, along with those cornering lights: three LEDs on each side, linked to the lean-angle sensor, which illuminate in turn as the bike banks through 10, 20 and 30 degrees.

Then there’s the even longer than normal list of options and accessories, which includes a hill-start facility (when you brake on a slope of over five degrees, the rear stopper automatically stays on for up to five seconds to prevent the bike rolling), and Motor Slip Regulation, which stops the rear wheel locking if you down-shift too soon while leant over into a turn. Plus the normal panniers, Akrapovic pipe and more.

Those would add a finishing touch to an utterly brilliant motorbike. At £15,999 when it arrives in late February the Super Adventure isn’t cheap, but it comes with a remarkable blend of performance and features, and with an all-round ability that is arguably second to none. 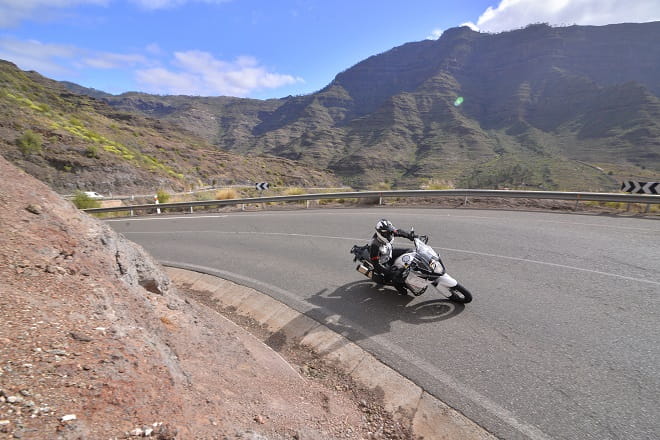