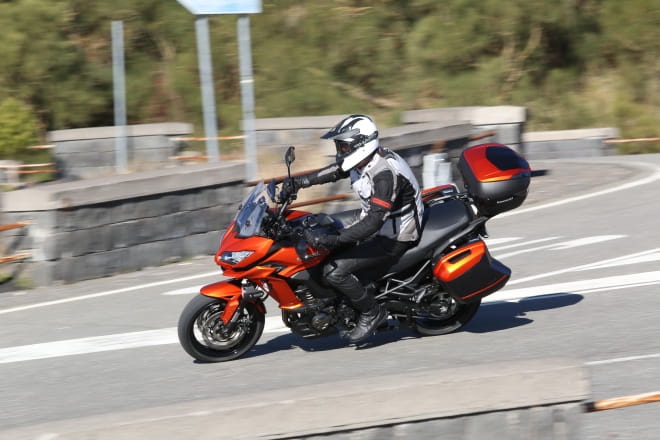 You’ve only got to take one glance at the revamped-for-2015 Versys 1000 to know that Kawasaki have taken a big step forward with their Z1000-based adventure touring bike. Lined up in the sunshine outside the launch base hotel in Sicily, the big orange Kawasakis looked good in a way that the old model, with its curiously shaped twin-headlamp face, couldn’t approach.

And there’s much more to the updated Versys than a reshaped fairing with its side-by-side twin lights. Thanks to a beefed-up rear subframe, the launch bikes were able to wear panniers and top-box together, which the old model couldn’t do. The new model also incorporates uprated suspension and brake system as well as tweaks to the 1043cc engine’s injection system, airbox and exhaust.

The mods add a couple of horsepower to bring maximum output to 118bhp but the motor is still all about low-rev torque. It is a superbly grunty powerplant, happy to pull from below 2000rpm even in top without complaint, and to rev all the way from there to the 10,000rpm redline and a 140mph-plus top speed if required. On mostly twisty Sicilian launch roads I spent much of the time with the motor between 2500 and 5000rpm, and the Kawasaki punching smoothly out of the turns with an effortlessly strong feel. 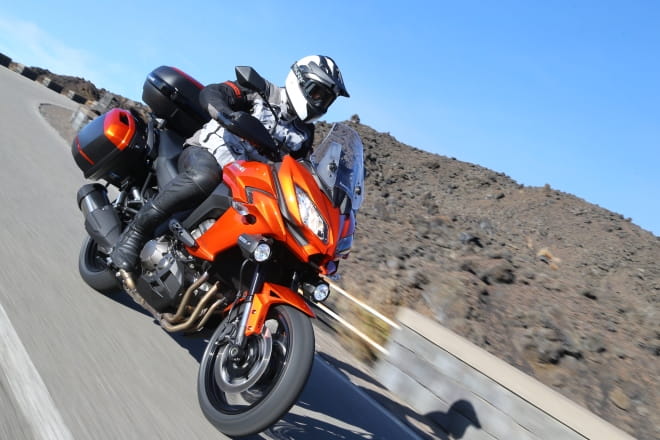 If you want to go really fast you need to work it harder and get the tacho needle up nearer the 10,000rpm redline, but the motor felt a little more strained at high revs and was so sweet low down that I rarely bothered. Fuelling was so smooth that I also didn’t have any need for the low power mode that cuts output by about 25 per cent. The new slipper assist clutch had a light action along with an adjustable lever span.

The instrument panel, which combines digital speedo and analogue tacho, includes a fuel gauge and consumption indicator. I averaged 47mpg on the launch, riding quite hard at times although rarely using a lot of revs. That would give a realistic range of 200 miles from the unchanged, 21-litre tank, and plenty of riders would manage more. 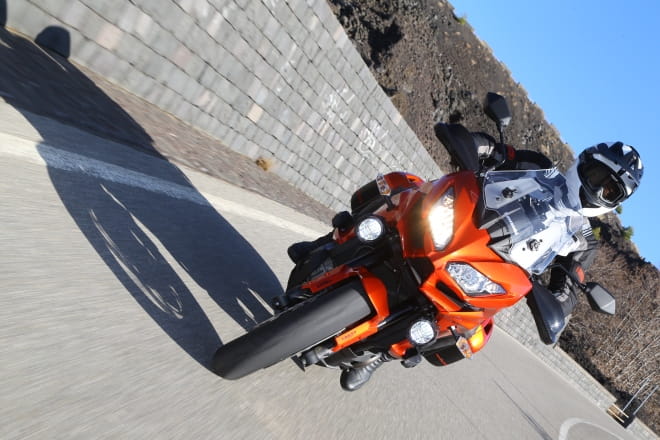 Long trips would be enhanced by the frame’s new front rubber mounts, intended to reduce vibration. I suffered no annoying tingling through bars, seat or footrests but on a short stretch of autostrada I occasionally found myself looking for an extra gear, because the big four-cylinder engine can feel slightly busy at higher revs.

Comfort is very good, the unchanged and roomy, upright riding position combining with usefully improved wind protection. Screen adjustment is increased from 30 to 75mm via two hand-turnable knobs on the front — enough for riders of most heights, though being very tall I still caught a bit of turbulence. The seat is wide, seemed well padded and gave no aches after a couple of hours. Pillions get a similarly large seat plus generous hand-holds.

The twin-tube aluminium main frame is unchanged but along with its stiffer rear subframe the Versys gains new 43mm Showa upside-down forks with longer, more rigid outer tubes. Rear suspension is slightly stiffer, partly to cope with additional load. At a standstill you inevitably notice the bike’s size and weight, which is slightly up on the old model’s at 250kg wet, though that figure does include the centre-stand, which is now standard fitment. The seat is 5mm lower at 840mm; every little helps.

Handling was impressive for such a big, heavy bike, with reasonably light steering thanks to the wide bars and 17-inch front wheel. Ride quality was good, as you’d expect with a generous 150mm of travel at each end. To start with the suspension was slightly soft for hard riding, but adding a few clicks of shock preload with the remote adjuster, plus a small amount of damping at each end, firmed it up nicely and helped make the Kawasaki improbably good fun on twisty roads up Mount Etna. 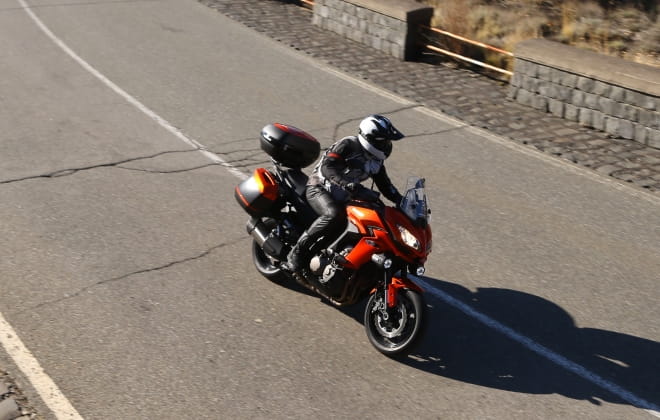 Braking was also impressive, with the larger, 310mm petal discs and new calipers combining to give plenty of power, backed up by an efficient ABS system. The road-biased Bridgestone T30 tyres did a good job too, even on some suspiciously slippery looking roads.

In the UK the Versys comes in three colours (black or white are the alternatives to orange) and three versions. Alongside the standard model, which costs £9749, is the Versys Tourer with panniers (including bags) and plastic hand-guards, at £10,399. Top of the range is the Grand Tourer, which costs £11,099 and also adds the top-box and driving lights, plus a 12V socket and digital gear position indicator.

It seems a bit mean to charge extra for the power socket and gear indicator on the other two models, but the big Kawasaki delivers a lot of very practical motorbike for the money. Those panniers each hold a full-face helmet; the top-box holds two. The ignition key fits all the luggage, which can be removed to leave no ugly mounts showing. Fully kitted out like that, in particular, this much more stylish looking Versys has all it needs to be a seriously good long-distance machine. 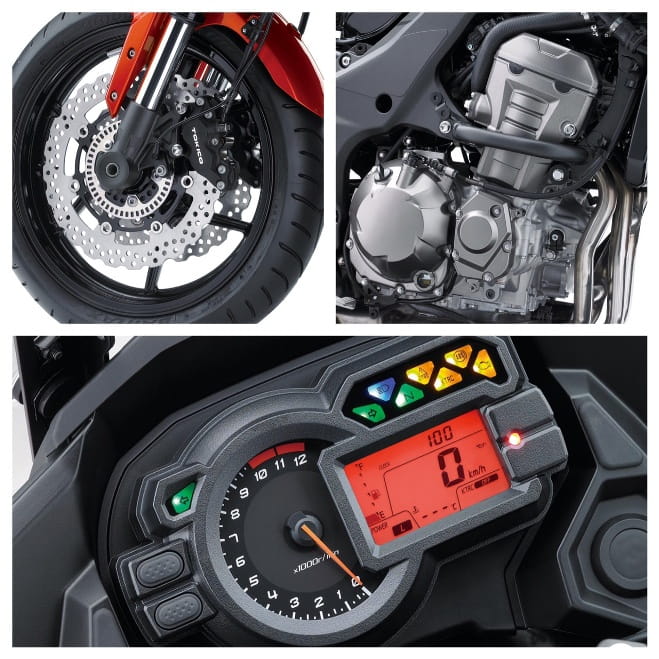 Does the 1000 version of the Versys appeal?