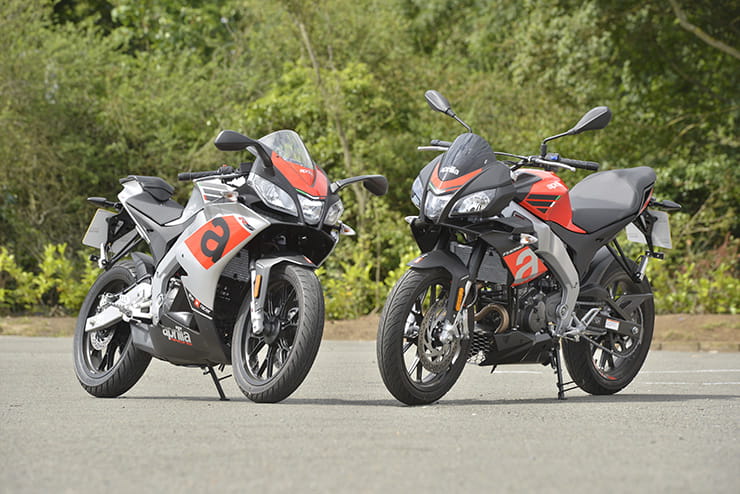 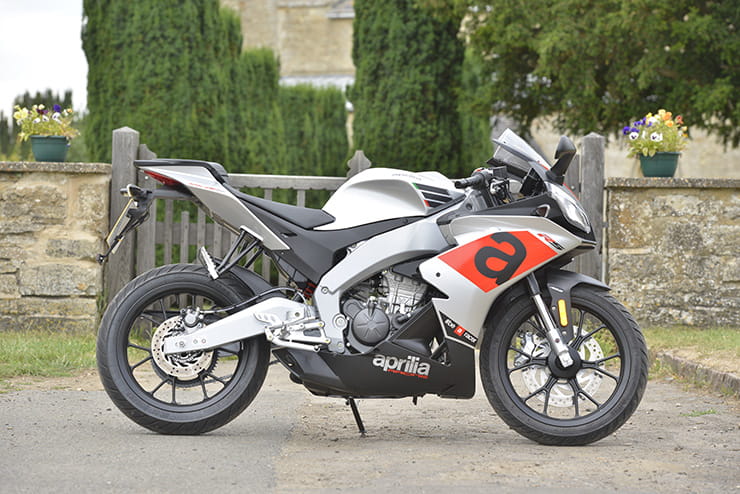 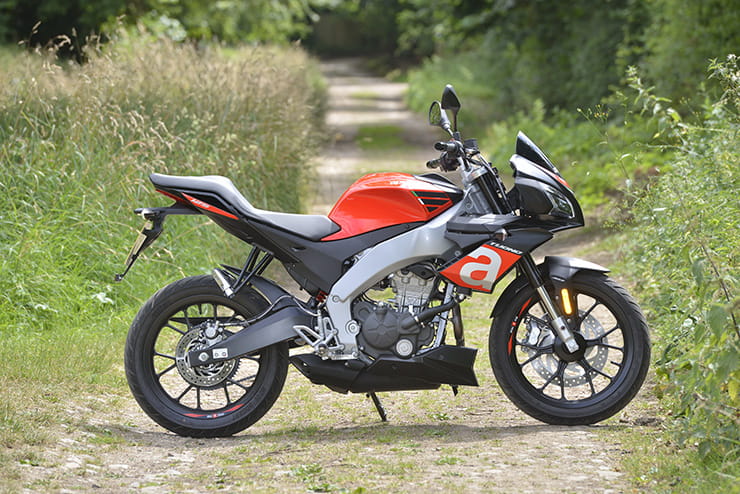 Head down, neck veins bulging, eyes on stalks under severe cranial blood pressure, torso wedged tightly into the space behind the screen – the Aprilia RS 125 isn’t exactly small, but the rider spills out of the sides like sausage meat wrapped in cling-film.

And yet the speedo’s black LCD numerals are still clicking slowly upwards as the revs in top gear begin to peter out past 9000 o’clock. The shape on the bike redoubles his efforts to make himself compact, and slides his weight back onto the sharply stepped pillion seat to complete what he hopes will be an aerodynamic teardrop shape, but probably looks more like a lumpy giant bean bag.

Nope, that’s it, it won’t go any faster. The rider starts to sit up, grumpy – but then the A-road drops downhill again and he has one last, desperate attempt. Pulling the throttle cable tight as a top E string, 80mph briefly appears on the speedo through willpower as much as anything – but hey, hooray! Euphoria! The race has been won!

It’s pathetic, really, but when you’re riding a 125 you never lose the “Wot’tle it do mister?” thing, no matter how many grey hairs you’ve got. 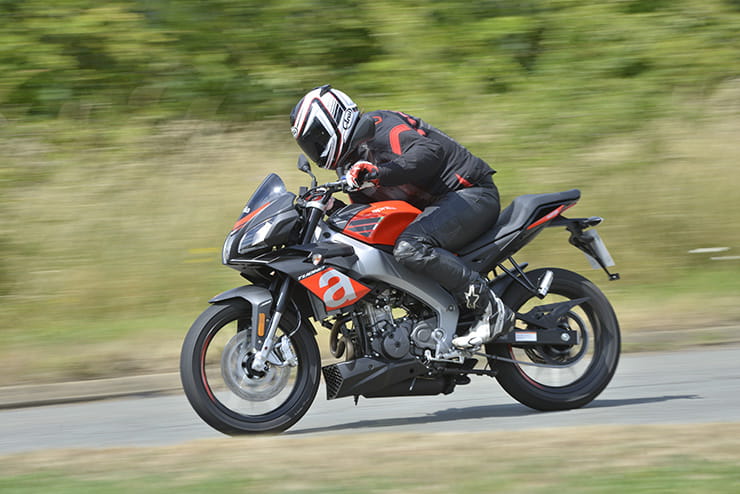 If motorcycling is struggling to gain new recruits from ranks of disaffected teenagers experiencing adolescence through the prism of YouTube, it ain’t because the only bikes they can ride are rubbish. Well, not all of them.

If you choose carefully (and borrow a chunk from the bank of mum and dad), your modern, flagship four-stroke 125 is almost as stunningly purposed, in its way, as your modern, flagship superbike. Ish – relative to its price, modern, premium 125cc suspension, brakes, tyres and electronics technology are a lifetime away from the bouncy, skinny-tyred, under-braked, strangled 125 stinkwheels old timers grew up riding.

And Aprilia’s updated RS 125 and new Tuono 125 are examples of how good the kids today have got it. The pair are meant to be the spitting images of their large capacity brethren, and from 100 yards they’re far enough away to pull it off to the untrained, almost completely closed, eye.

But being cynical – as I am – you could draw a much more direct parallel between the Piaggio Group-owned Aprilia 125s and the Piaggio Group-owned four-stroke Derbi GPR125, built seven years ago but now discontinued. They have the same frame, same engine, same exhaust, same swingarm... it’s an interesting definition of Aprilia claiming the RS 125 and Tuono are “Designed, developed and built in Italy”. Maybe they mean apart from the bits designed and developed in Spain nearly a decade ago? And apart from the engine, which is made by Zongshen in China. For Aprilia. And that used to be made for Gilera. 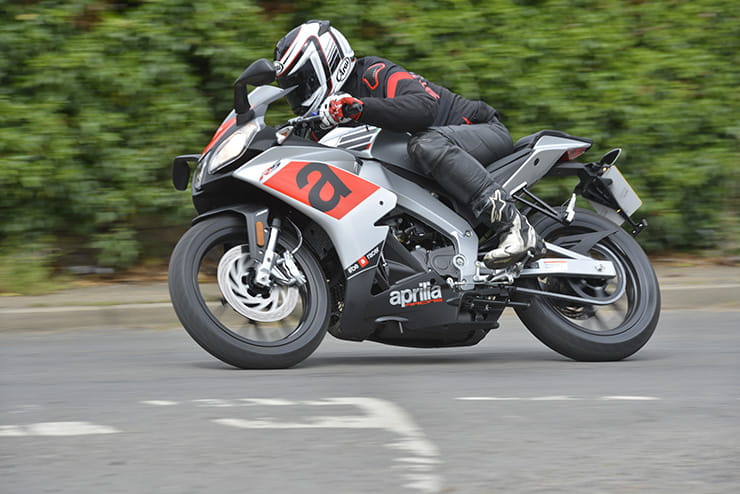 Anyway, the RS 125 and the Tuono get a long way down the production line before riding position and bodywork, or lack of, splits them into one or the other. They share the 124.2cc, dohc, fuel injected single making the statutory 14.7bhp at 10,750rpm and 8.9 lb.ft at 8000rpm. They share the same aluminium beam frame, same unadjustable 40mm usd forks and rear shock, same single 300mm disc and four-pot (quasi-)radial caliper, same Bosch ABS system, same headlights, switchgear, clocks and fuel tank, and same USB charging point under the seat. That’s a pretty healthy spec list for a learner bike.

In fact it’s quicker to list differences: half fairing (not a nose cone) for the Tuono, full bodywork for the RS. The sportsbike has clip-ons and the Tuono gets risers and flat bars; the RS has alloy rearsets while the Tuono’s lower, more forward pegs have rubber inserts. Finally, the Tuono has a lower, one-piece seat while the RS has a stepped two-piece. 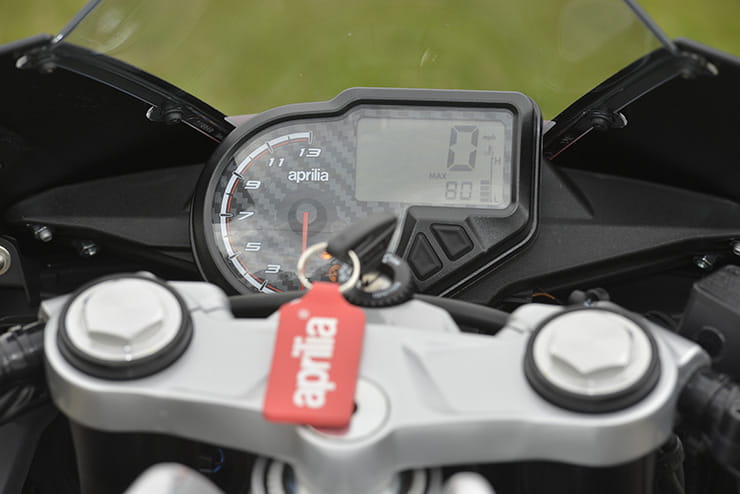 Out on the road, both bikes are beetle off into the distance with their serpentine bellypan exhausts pulsing with a flat drone. And they’re pretty nippy; 15bhp gets you a long way. Acceleration really starts around 7000rpm, 70mph comes up at 9250rpm, and keeping up with most traffic is easy once you’ve re-learned the knack of conserving momentum (don’t slow down!). Controls are light and easy, both transmissions (with the same ratios) are positive, and there’s little to interfere with the business of wringing either of the Aprilia’s necks. 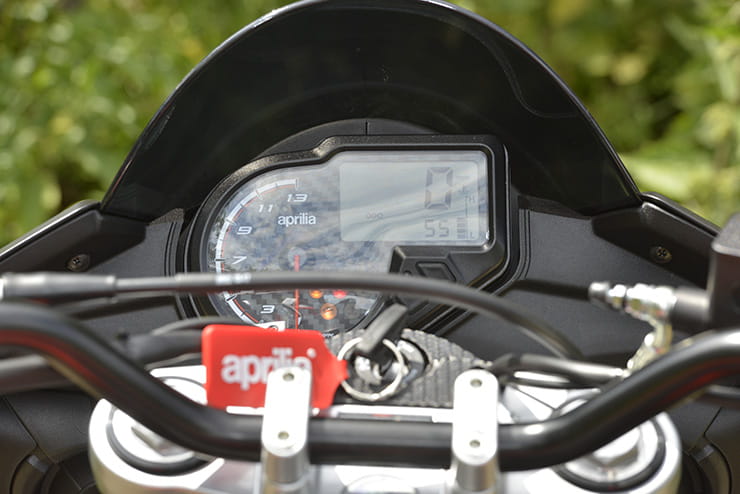 And ride quality from both is predictable; they’re skittish but not overly crude, pattering across bumps mid-corner but hanging on to the tarmac. Swapping the Czech-made Mitas rubber for something a bit more grippy would show up more of the suspension’s weakness – but better that way round than run out of grip. The radial brakes are well-matched to both bikes too – not too sharp, and with Bosch ABS chiming in discretely in the background when called upon (which is fairly often, given the tyres).

As it is, even my massive bulk doesn’t overly compress the springs of either the Tuono or the RS; of the two, the Tuono’s upright riding position is the more natural for a fully-grown silverback and it’s not inconceivable to ride the half faired bike a long way without complaint. The RS is a more focussed, demanding creature simply by virtue of its more compressed riding position – the sportiness is great but, without serious performance to back it up you’re left feeling a little foolish sometimes. The Tuono is always less self-conscious; full-grown lads won’t feel silly on it. 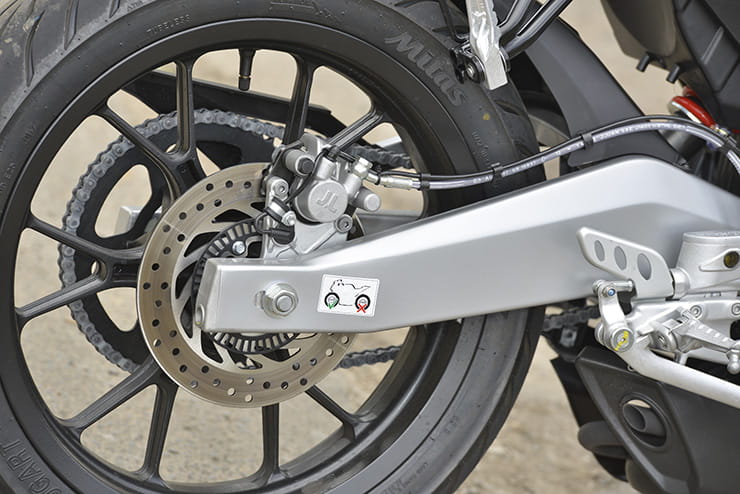 Overall, the two ‘new’ Aprilias bring the expected layer of class to the 125 class; they’re slightly rougher round the edges than the smoothy Yamaha YZF-R125, and less visually impressive as KTM’s 125 Duke. And they’re a direct rip of an old Gilera design, which is disappointing. But aside from those things, the RS and especially the Tuono are worth a closer look.

And 80mph is your target.