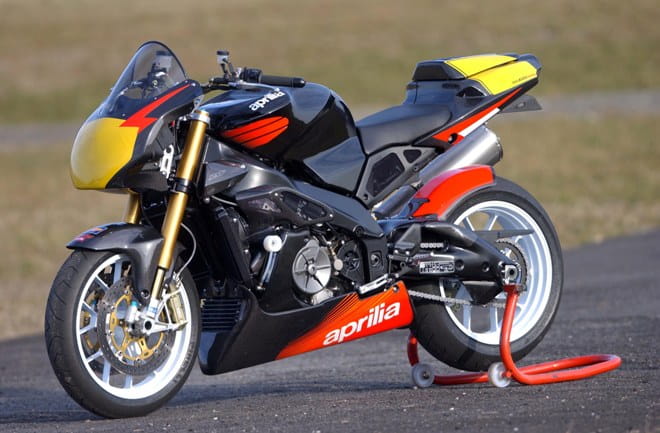 “It’s a bike for throttle fiends, at the limit leans, skids, wheelies and braking – always in safety…” When Aprilia unveiled the Tuono Fighter concept bike at the Bologna Motorcycle Show in 2001 they were unashamed about who they were targeting this new breed of bike at. The world’s first super naked had arrived and when the Tuono eventually hit our streets in 2003, sportsbike riders suddenly had a new view in their mirrors - an upright bike with wide bars and a rider who was probably frothing at the mouth.

Named after the Italian word for thunder, Aprilia did something that the Japanese didn’t have the balls to do. Rather than ‘de-tune’ a sportsbike motor and stick it in a budget chassis to make an uninspiring commuter, Aprilia simply removed the fairing and fitted a pair of flat bars on their sportsbike to make a no holds barred naked. And in late 2003 they took this concept one stage further.

Where their RSV sportsbikes always had a higher specification ‘R’ version, initially the Tuono only came as a base model. While this was certainly more than bonkers enough for road riders, Aprilia had their eye on an even bigger prize and one that would certainly irritate their neighbours in Bologna.

In the early 2000's there was a prestigious naked bike race series in Italy, something that Ducati were busy dominating with their water-cooled Monster S4R. Aprilia decided it was time to create a bit of a stir and in mid-2003 launched the limited edition Tuono Racing with the sole purpose of taking the honours in this series. 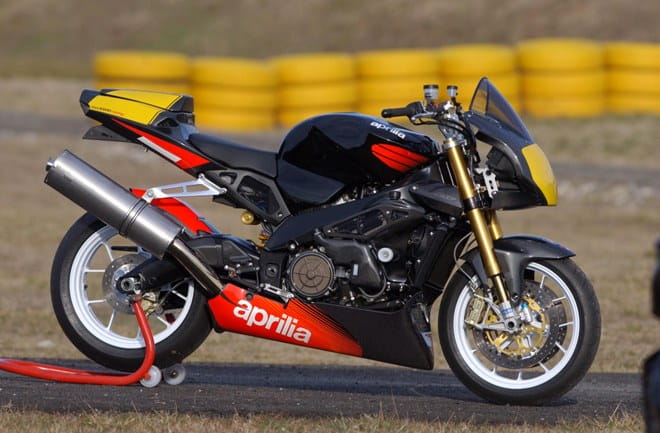 Effectively the very first Tuono Factory, the Racing copied exactly the same formula that Aprilia used to great effect on its sportsbikes. Using the standard bike’s chassis, swingarm and motor (although on the Racing the frame and swingarm are painted black), Aprilia upgraded where necessary to ensure race success. The standard suspension was replaced with Ohlins units and lightweight OZ wheels and Brembo radial calipers were borrowed from the RSV-R. Then, to give it a bit of exclusivity, all the bodywork was made from carbon fibre. And it didn’t stop there, as this was a race bike, Aprilia also included a long belly pan with an oil catch tank built in, racing nose cowl and a titanium race exhaust with an ECU upgrade chip in the package. Not only did the Tuono Racing look stunning, it also sounded like thunder thanks to the horrifically loud pipe. But it wasn’t all plain sailing.

The Racing may have succeeded in its goal of winning the Italian race series, but the £11,425 price tag meant sales to road riders were slow. In 2003 the whole super naked bubble hadn’t inflated and with a standard bike costing £7500, few wanted to pay nearly £4000 extra for a bit more bling. It may have been limited to just 200 units worldwide (this figure is debated), but that didn’t matter and as a result of slow sales, less than 20 made it to the UK.

Nowadays, Tuono Racings pop up for around the £5000 area, which is amazing value considering how rare the bike is. However there is a catch. A lot of Racings don’t come with the unique carbon race extras such as the belly pan and nose cowl and that seriously affects their price and complete bikes are generally in the £7000 area. If you want a proper bonkers super naked and don’t care too much about the fact it hasn’t got all the stuff it should, then snap one up and keep an eye on eBay for the bling bits. Although be prepared to face stiff competition, last time a belly pan appeared for sale it went for over £500! 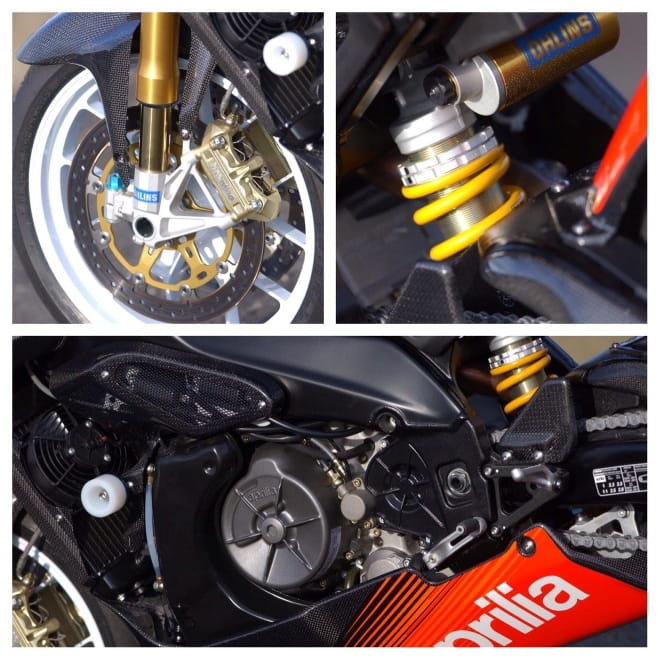 www.apriliaperformance.co.uk - Griff at Aprilia Performance is a total Aprilia nut and even owns a Racing himself. He is the go to man in the UK for anything with an RSV motor in it.

http://tuonozone.com/ - The name says it all. A forum dedicated to Tuonos of all shapes and sizes.

Have you owned or do you own an Aprilia Tuono Racing?