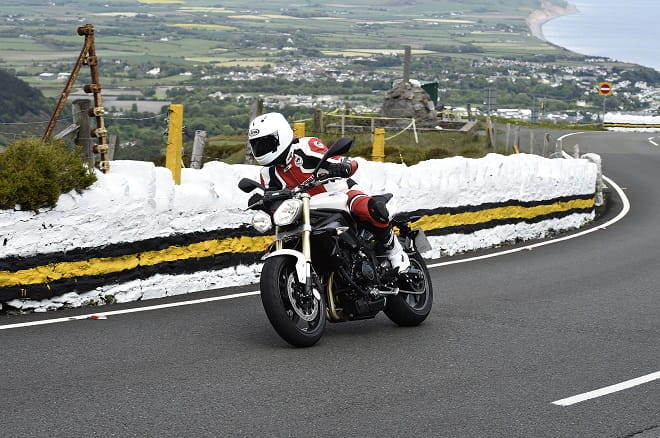 Back in the early 1950’s Japan’s first helmet was created by a hat maker and motorcyclist by the name of Hirotake Arai. Fast forward two generations and his grandson, Akihito Arai, unveiled the firm’s latest, roundest, strongest and smoothest product on the Isle of Man: the Arai RX-7V.

Just days before the racing begins at the TT, where over 100 riders will wear Arai helmets using around 4,000 tear offs between them, the new £599.99 premium lid was unveiled in public for the first time. However, it won’t be available in the UK until Motorcycle Live at the NEC in November and prices are £100 extra for those with graphics. We’ve already seen Dani Pedrosa, Nicky Hayden, Freddie Spencer and Maverick Vinales replicas. 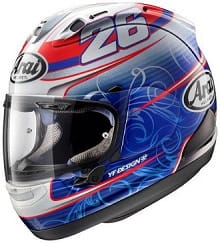 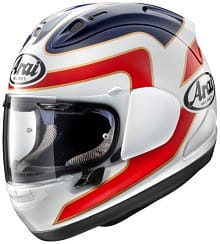 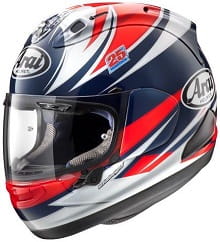 Bike Social was at the launch and we’ve already tested the replacement to the RX-7GP on the famous 37.73 mile Mountain course. The circuit was open to the public which offered a handy opportunity to test the helmet in a combination of conditions including 30mph towns plus the mountain section with its limitless speed restriction.

The product quality and protection on offer is best demonstrated by the volume of professional riders and drivers who use Arai across MotoGP, WSB, BSB. It’s also the most commonly worn helmet in Formula 1.

USEFUL LINK: How to measure for a helmet

For the last 18 months I’ve been wearing a Shark Race-R Pro in size medium, ideal for the 58cm circumference around my head. It’s a snug fit which some would prefer for shorter (perhaps track) use. I also spent many years in an Arai Astro-R which was also a snug fit but I could ride all day without issue; the only downside was how close the chin protection was.

The new Arai is also in size medium is a roomier fit, there’s an airy feel so much so that I sought advice from Arai’s fitting experts after a first run around the Jurby airfield circuit. The new ventilation system is certainly effective; thankfully the cool breeze comes without the wind noise which is ideal for warmer temperatures even with all vents closed. This of course means that riding in cooler conditions may require additional layers. The RX-7V is comfortably tight in the right places and the extra chin room is both noticeable and welcome, no longer can I kiss the inside of the helmet with too much ease. The single lever visor operation is simple to use even with a glove and clicks back into place with the required quality you’d expect from a £600 lid.

The replacement visor system improves the structural integrity of lid. On first appearance it’s as complicated as on previous versions but practice a couple of times and you’ll soon get the hang of it. We asked Arai expert fitter to demonstrate how to replacing a visor on the new RX-7V:

Of course wearing a helmet in the UK is a legal requirement and we’ll not skirt around the fact that in the event of a spill it’s there to keep your head intact. As you'd expect Arai have of course submitted the new helmet to stringent tests and analysis in order to earn the Snell and ECU standards. An ECU certificate requires a helmet to withstand one impact in one location at 28kph yet Arai’s research claims most impacts occur on the top quarter area away from the main legal test points. In fact they test their helmets with an impact speed of 100kph which in turn sees an increase of 12.85 times more energy needing to be absorbed and dissipated.

Meanwhile, all MotoGP helmets must test the American Snell standards thus further proving its credentials. And each time Pedrosa, Vinales, Cal Crutchlow or other Arai riders go down just think they are doing the world's Arai-wearing motorcyclists a service.

Ingmar Strovonen, Managing Director of Arai Europe told Bike Social: "We learn a lot from racing. We can analyse the crashes from MotoGP and World Superbike TV footage and of course when we get the helmet back to analyse."

So what is Glancing Off?

Arai refer to this phrase as having the ability to dissipate energy. Their new RX-7V is better at doing this for three reasons:

After two more runs around Jurby – with and without ear plugs – I began to concentrate more on the riding than the helmet, proving that all was well. The excellent field of vision is complimented by a sturdy visor fitted with an anti-fog lens. The helmet also has eight adjustable vents and double D-ring fastening which has a standard popper to stop the strap flapping around which was easy to fasten even with gloves on. The Arai RX-7V is extremely comfortable, high-spec lid which has a five-year warrenty and the reassurance of all that testing but do consider the airflow and complex visor fitting system. It’s there for a purpose but don’t expect to master it on your first attempt. 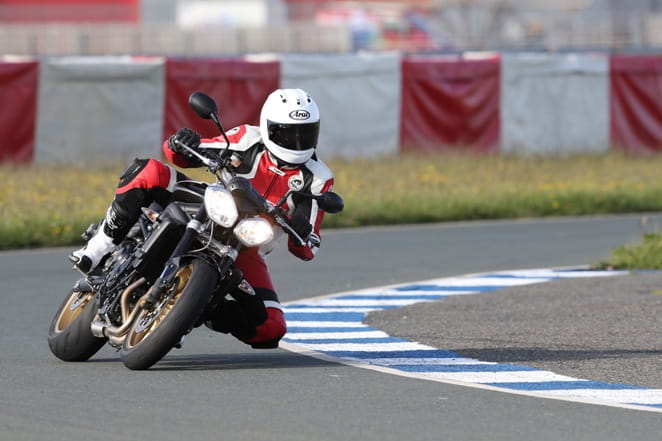