Two of the TT's biggest names, John McGuinness and Bruce Anstey, put their electric Mugen Shinden 3 electric bikes through their paces at a private test at Castle Combe yesterday in preparation for the Isle of Man TT Zero race in 2 weeks’ time. We were invited along for a behind-the-scenes look. 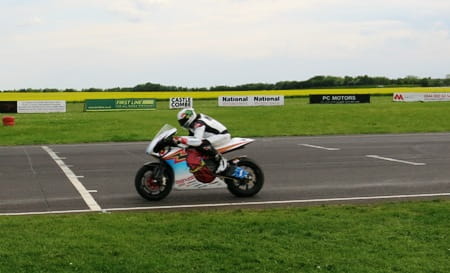 Both riders put in strong performances during a number of 6-lap sessions and the highly efficient Japanese team will return tomorrow (Wednesday) to complete the test although the forecast doesn't look to be in their favour and the Mugen machine has not been designed to run in the wet.

The prototype Shinden 3 bike features many upgrades including new Showa suspension, a new motor via Mission Motors, a new battery pack through Maxell, new bodywork to reduce drag and control the bike as well as weight-saving modifications to the full-carbon fibre frame and swing-arm. 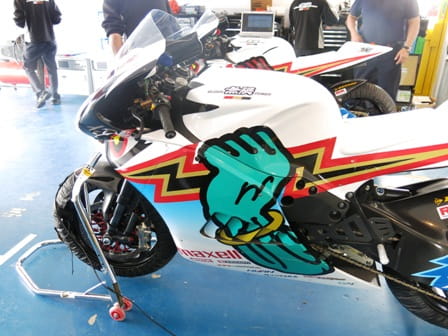 The riders have 29 TT wins between them will start as joint favourite with last year’s winner Motoczysz not putting in an entry this year. Anstey and McGuinness are expected to be battling each other for the TT Zero honours at the Isle of Man this year with a target average lap time of 115mph, an increase of more than 5 mph over the current record of 109.675mph set last year by Michael Rutter on board the Motoczysz machine. And remember that the TT Zero race is only one lap of the 37.733 mile circuit so that average speed is set from a standing start. Rutter’s record marks an incremental increase of 13 mph over the past 3 years which will be approaching 20 mph if Mugen’s calculations prove to be correct. The development of these electric racing bikes is happening now and it's happening quickly. The traditionalists will poo-poo the idea of having a powered racing machine which can't be heard and which weighs 100kg more than a superbike but what we are experiencing here is the future of motorcycle racing...and if the question is when will it be wholly embraced i.e. when will it supersede the superbike race as the blue riband and race at the TT, then the answer might not be until the next generation. Like it or not, this is the future in its infancy and we should be proud to be witnessing it. 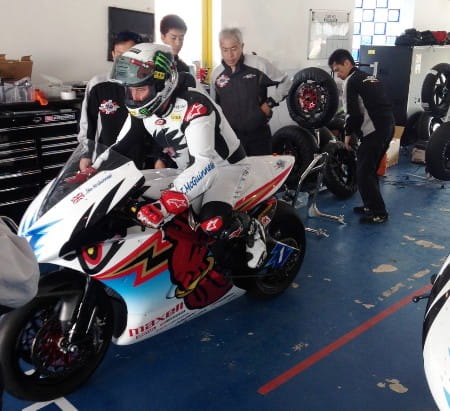 The Wiltshire circuit was chosen because of its fast and bumpy characteristics which are as close a match to the Isle of Man's Mountain Circuit as possible. It also hosted Honda's recent own TT test prior to the North West 200.

McGuinness has been involved with the Mugen project since their first involvement with electric bike racing in 2012 and after being so close to the win in 2013, the 'Morecambe Missile' is determined to make up for it this year.

“The new bike handles like a 250, it has a nicer riding position than the old version which felt like you sat on top of it so when you hit the brakes it always felt like it was going to ping you through the screen. This one is more balanced and more stable on the brakes, not that you brake a lot around the Isle of Man but there is a hell of lot of places where you can get deep into the bend on the brakes. It’s a nicer riding position, you can get tucked in better because of there’s a bit bigger fairing. They’re claiming more power but electrics is like white man’s magic to me…I don’t understand it! Seems strange how you press buttons and click things and all of sudden it goes faster and faster but I really enjoy riding it.

The main differences between it and a superbike? Well, you look around it and there’s no rear brake or gear shift lever in the normal places so it’s a bit like a scooter with the rear brake lever where it is but I’ve never once gone for the clutch or the gear lever. When you go round the track you just get into a rhythm.  It doesn’t do anything silly, it just feels like a motorbike.  Every increment of throttle you turn feeds on more power, it’s smooth. I love working for these guys – everything is so neat and pristine. It’s good fun!

Today we’ve learned a bit more about the bike, more mileage, more bike fitness. We can learn more about this years’ bike, there’s lots of positives. Every time we get on a bike I can feed myself back into it more, I can get more confident because I didn’t have a good time at the North West.

I hope we can get the win with this bike but Bruce is going to be there for sure. The man’s a freak of nature – he’s got more talent in his left b*ll bag than many other riders but he’ll decide whether he wants it or not on the day.

We’ll have to make up for last year, we had a 9 second lead at one point last year and ended up losing by 1.6s through no fault of our own. Fair play to Michael Rutter who played the strategy perfectly. We rode flat out, as fast as we can for the whole lap but I take my hat off to Michael and Motoczysz, they pulled my pants down and were better on the day.

If there’s anyone in the world who doesn’t want to ride that Mugen, they’ve got issues! Some people don’t like the concept but it’s a massive honour to ride it.  I dread to think how much it costs, I don’t ask but it won’t be a couple of hundred quid! Everyone laughed when the Japanese first came over in 1959 but they came back the following year and thrashed them all. It reminds me of this. It was a no brainer for me, when Mugen asked me. I’m loving every minute of it; I’ve been over to Japan to the factory and it’s fair to say they pay me a few bob but I’m really into it.” 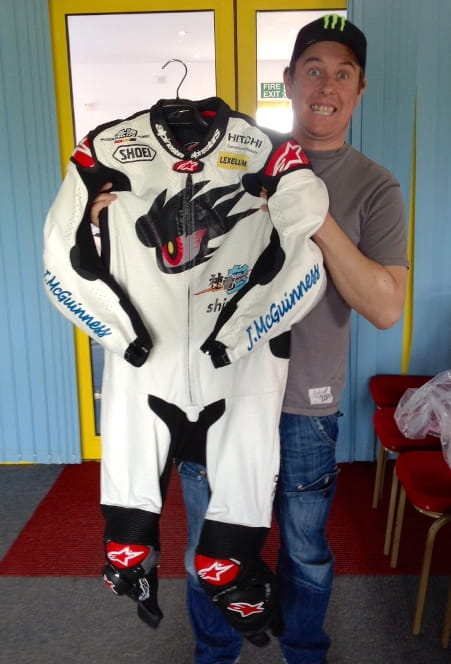 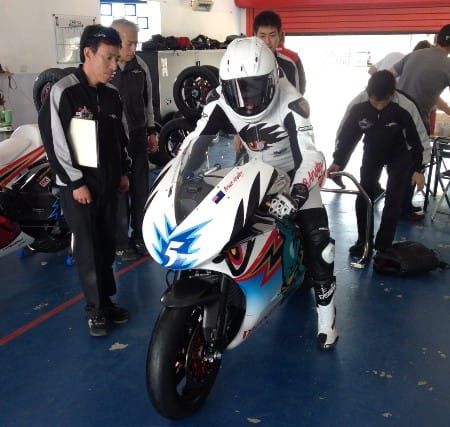 “It was good, the conditions were perfect for testing, spot on.  I was just taking it steady until the last couple of runs and then I had a decent go at it but I just don’t want to damage it before the Isle of Man! I was trying the different power levels, boost button and we made a few suspension changes too.

It’s easier than a superbike to ride, you don’t have to worry about changing gears there’s just the throttle and brake but the way the power comes in is just like a superbike anyway. I don’t tend to touch the back brake.

I was interest in the project from when thy first started the TT Zero. I’d watched it from the beginning (on grid with JM?)I fly helicopters so I’ve been watching the battery technology come on making great leaps.  Battery helicopters are more powerful than the fuel powered helicopters, it’s very impressive.” 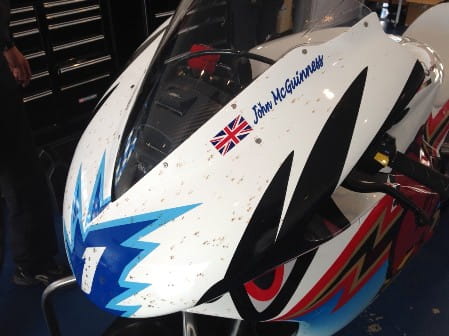 Coming soon: we look at how Mugen are shaping the future of motorcycle racing including a video of the bike being started and warmed up.

Will you be tuning into watch the TT Zero?