Motorcycle Island | Best Cafes on the Isle of Man

Welcome to the latest episode in our Motorcycle Island series and we’re taking a look at the Isle of Man’s 10 most motorcycle-friendly cafes, tea-rooms, light-bite restaurants and even chippy’s as voted for by BikeSocial members who live here on the Island. Who better to trust than the locals? 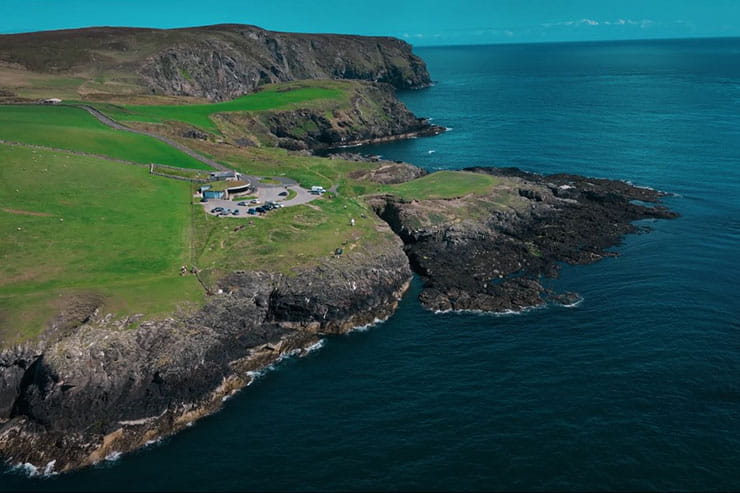 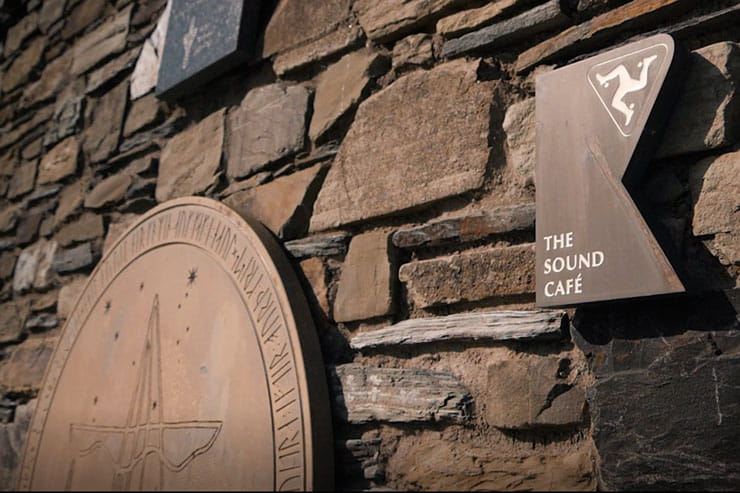 Where better to start than the most popular; The Sound Café is located at the very southern tip of the Isle of Man, which is a beautiful place to appreciate the Island’s coastal beauty, whether it is on a sunny summer afternoon or a dramatic winter morning. The cafe offers panoramic views of the Calf of Man and the surrounding countryside, paired with Manx food, indoor and outdoor seating. Seafood or locally sourced main courses, hot drink and a wide selection of freshly baked cakes and goodies, most of which are made by the owner’s wife - or maybe a Davidson’s Manx ice cream. Popular with walkers, cyclists, kayakers too and there’s plenty of footpaths running east and west.

The Calf of Man is a 600-acre nature reserve and home to 33 species of seabird. While in the sea there’s a chance you’ll see seals, dolphins or even basking sharks.

While there’s plenty of space available for bikes to park up, be aware of the undulations and surface changes. Even the road down to the Sound Café is ideal for motorcycles. 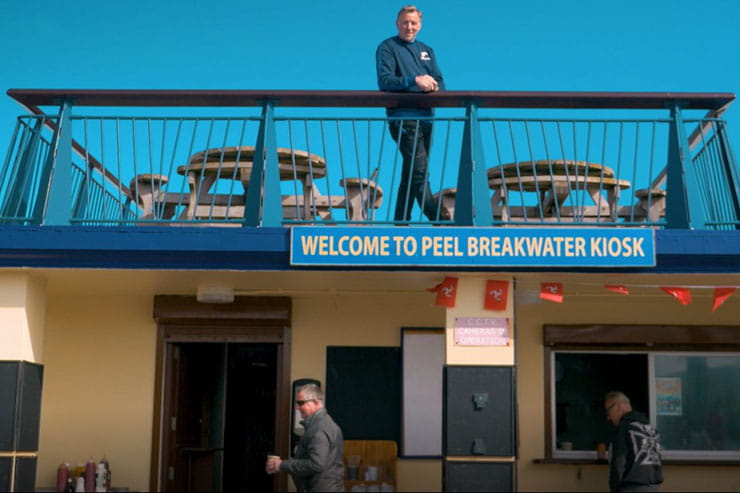 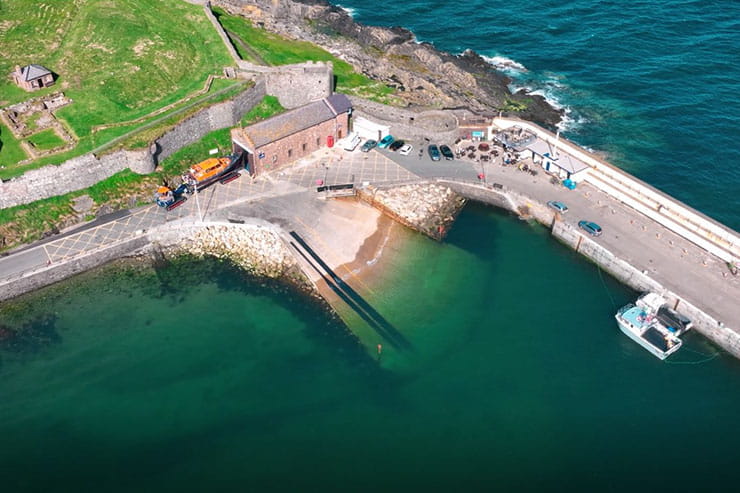 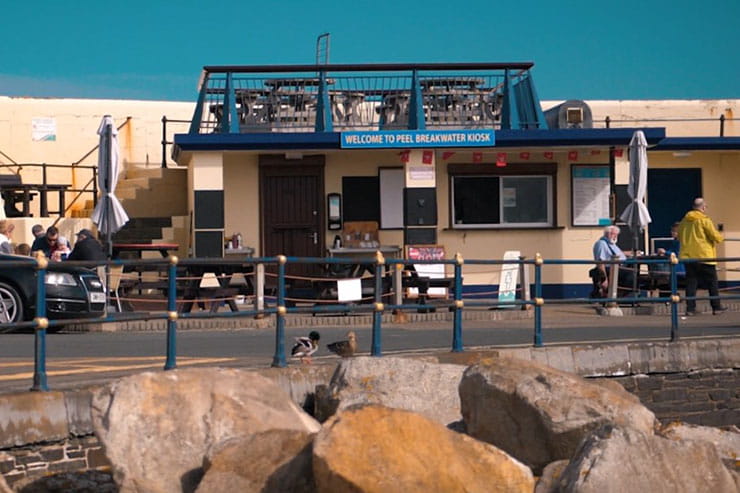 Peel is a seaside town and small fishing port on the west coast of the Isle of Man. It’s the third largest town after Douglas ad Ramsey, and home to The Breakwater Café/Kiosk situated on the promenade in the shadow of Peel Castle, a medieval castle on St Patrick’s Isle.

It’s been voted as the second most popular and has only a few spaces for bikes out front though a lot more further along the promenade. A limited amount of outdoor seating both in front and above the kiosk (though it’s not covered), but a packed menu featuring the speciality of a range of seafood baps – manx crab, kipper or mackerel among them. It’s a great spot for a quick stop and a bite but the idea here is to enjoy the views over the harbour back to Peel, the castle and the lifeboat station. It can get pretty busy when the sun’s out, you’ve got to be careful of the birds who’ll be keen on your chips, do also keep an eye out for dolphins. 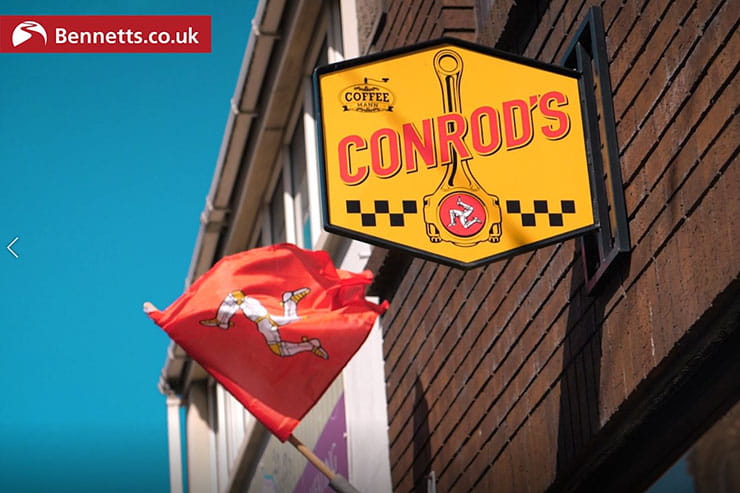 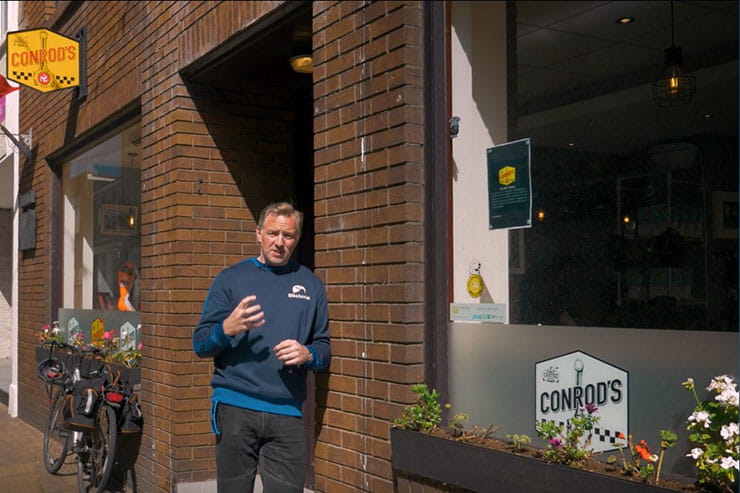 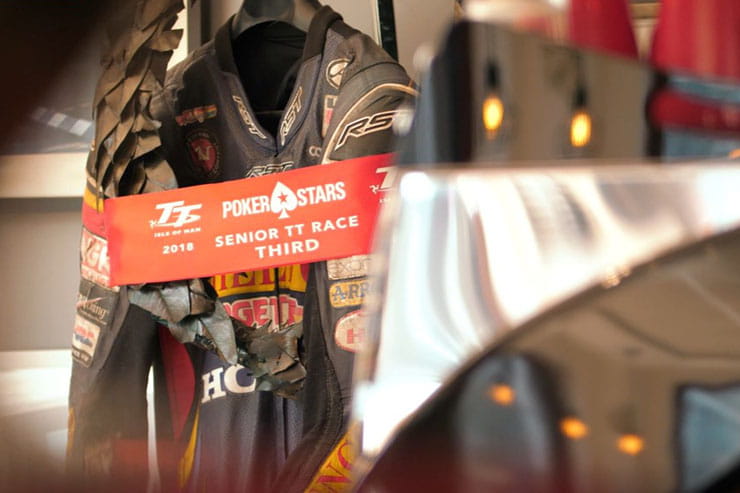 Third on our list is one of two eateries in Ramsey owned by local TT rider, and all-around good bloke, Conor Cummins. Simply known as Conrod’s, this café was his first and opened in 2018 after his mobile coffee cart idea became quite a success. The coffee shop can seat up to 40 people but because it’s in the heart of Ramsey, the Island’s second largest town, there’s no outdoor seating and limited parking immediately outside. The coffee shop is decorated with memorabilia and is the third most popular on our list.

The menu features locally sourced options for breakfast or lunch, as well as burgers, sandwiches, hot and cold drinks, and plenty of cake, though it’s famed for its more artisanal coffees. 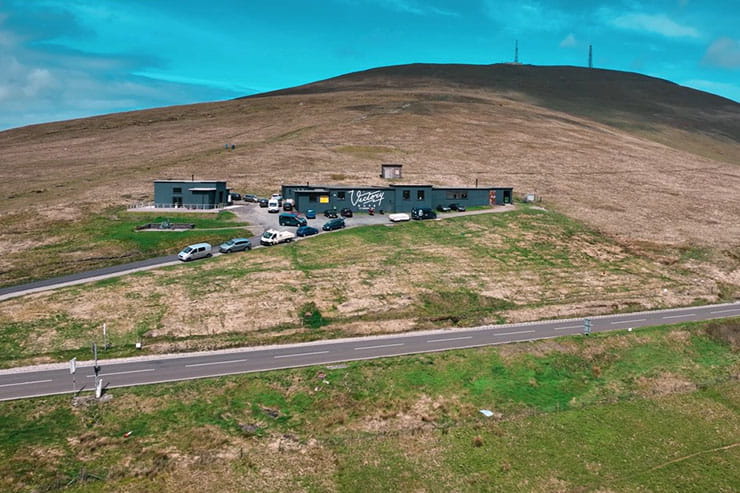 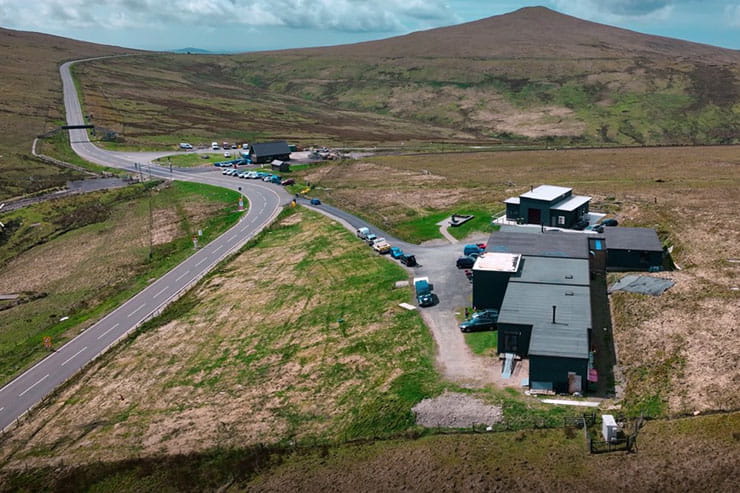 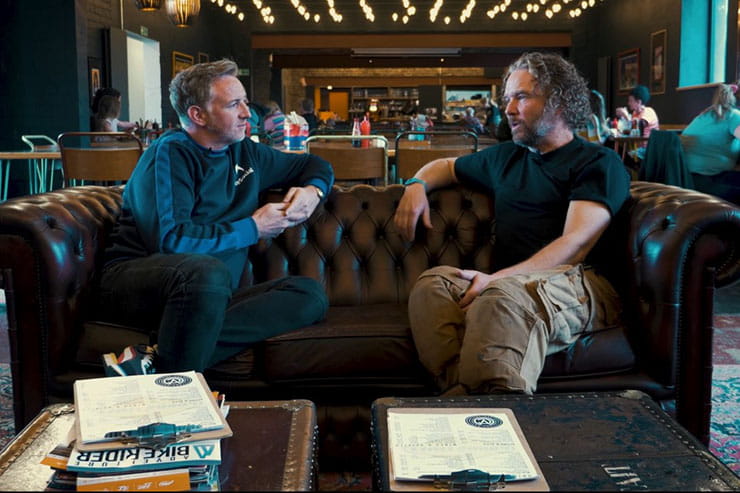 The fourth most popular on our list is also the newest and the highest; Victory Café is located on the TT course at the 31st milestone right next to The Bungalow and Joey Dunlop memorial, which makes it accessible by train (Snaefell Mountain Railway) as well as road, using the mountain road or one of the most awesome roads (Tholt-e-Will) on the Island through its heart from Sulby.

It only opened in 2021 after owners Vicky and Benn renovated an ex-Cold War Rotor Radar Station! There is loads of seating inside in this retro-styled restaurant, plenty of parking space too though it’s a gravel car park so be careful on your pride and joy when manoeuvring around outside.

Bike displays – from ex-TT racers to a pair of C90s, as well as a small TT cinema room, and a gold pen to sign the entrance hall, though when it’s time to eat then get involved with the home-made pie and mash leaving room for a slab of carrot and walnut cake after. 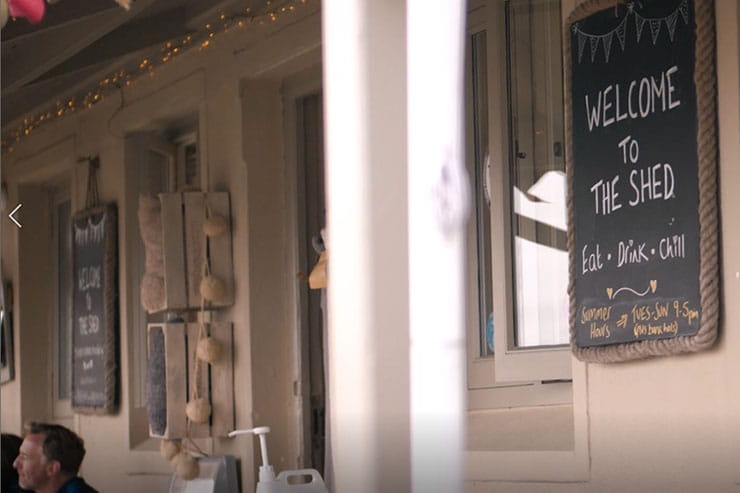 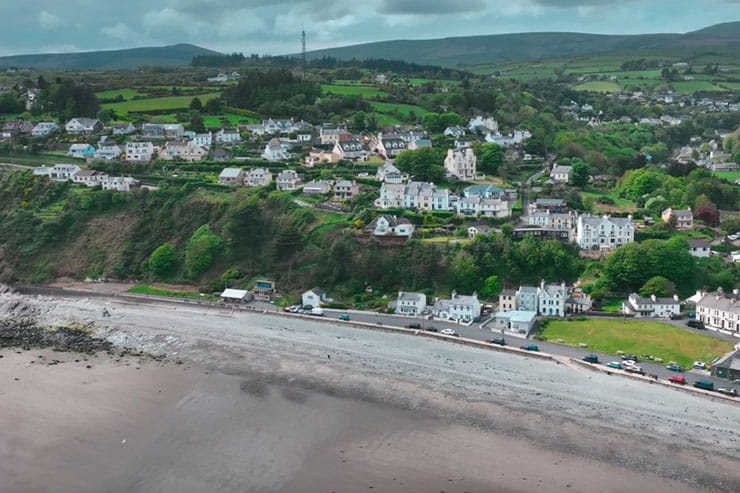 Meanwhile, on the East Coast of the Island you’ll find not one but two gems on the beach front in Laxey overlooking Laxey Bay and with some beautiful views (on a nice day) across the sea towards the Lake District. The furthest along the Laxey promenade is The Shed Café, which is small inside to only cope with three customers at a time, and with limited covered seating immediately in front, there’s plenty of room to park along the promenade, and to eat/drink sitting on the sea wall.

Established in 2017, you can see the attraction because of the smart décor, let alone the cakes, pies and fresh juices all on offer. Owner, Bev, even has a company that makes the frozen yoghurt ice lollies. Vegan and gluten-free options are available and there’s even more coming soon with an extension set to feature additional seating and a gelato bar in the process of being built. 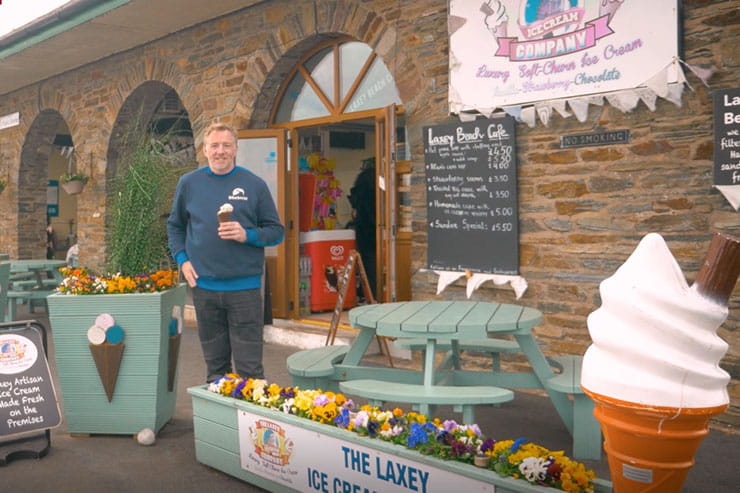 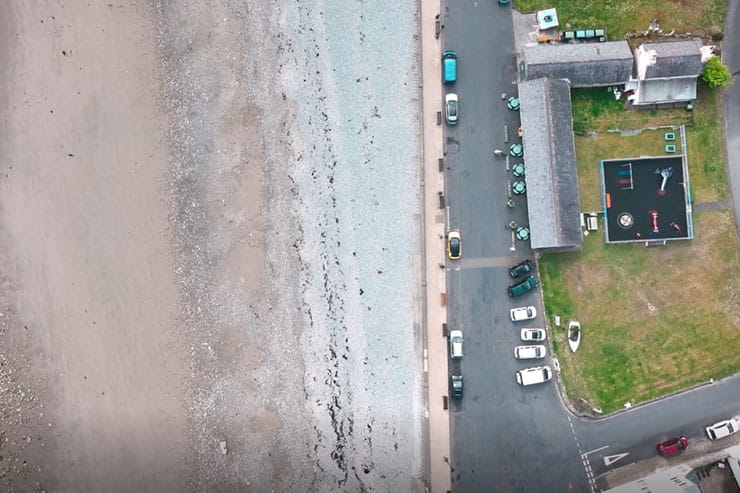 And just a short walk away from The Shed Cafe is the Laxey Beach Café, also open 7 days a week from. Inside seating and menu more focused on dining-in make are this café’s point of difference. Homemade ice creams and pork baps are the favourites here but the menu also features cakes, soups, sandwiches and of course, the local delicacy which is the Manx Crab Bap.

Parking is more widely available outside this café, and one date for your diary is Remembrance Sunday where a minute’s noise is held each year to raise money for the Poppy Appeal and the Joey Dunlop Foundation. 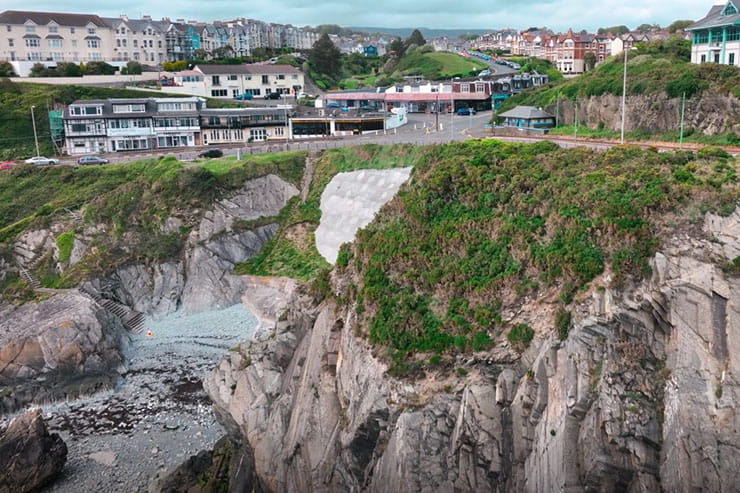 Perfectly located just outside Douglas and just a 20-minuite walk from the TT grandstand, the road immediately outside is A2 coast road linking Ramsey to Douglas along the coast which is very busy when the Mountain Road is closed during the qualifying or race sessions.

A typical chippy, complete with dining-in facilities, but also with spectacular views over Douglas Bay and enough seating along the cliff top to enjoy a bag of chips. However, the preferred order here just like it is at Fish & Chip restaurants and take-aways across the whole Isle of Man, is chips, cheese and gravy! 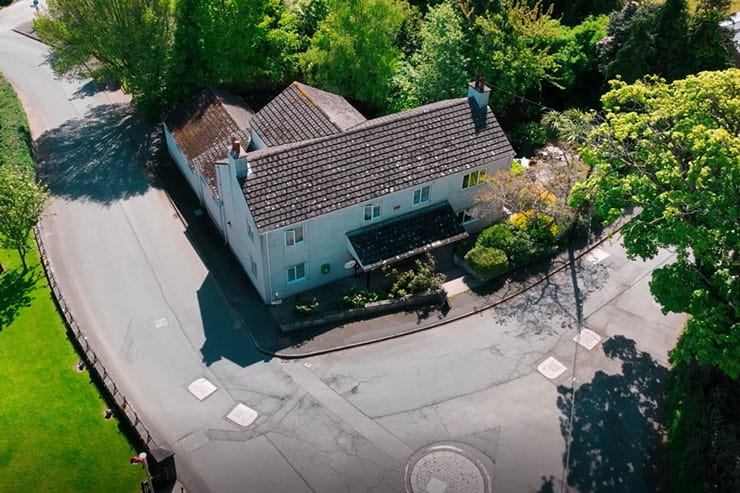 Our most northerly entry in the top 10 is the Bride Tea Rooms located in the small village of, yes you guessed it, Bride, which is just 4 miles north of Ramsey and set it some tranquil, quiet B-roads towards the airfield and motoring museum at Jurby. There’s easy access to the most northerly part of the Isle of Man, the Point of Arye.

This quaint tearoom is a superb stopover with ample parking around the rear, though I warn you about the gravel and potholes in the parking area. The afternoon tea is apparently very popular with motorcyclists while I can personally vouch for the lemon drizzle cake – all of course are homemade. The menu itself extends to offer full lunches and they don’t cut the menu down for the TT. Sitting is available both inside and out (in a courtyard). 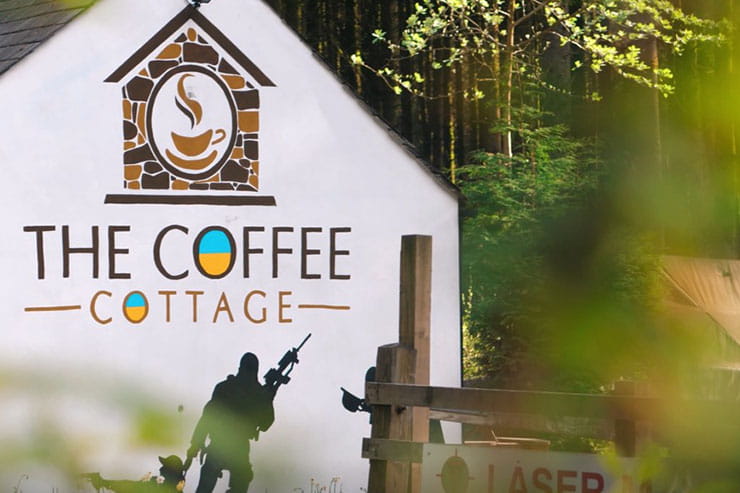 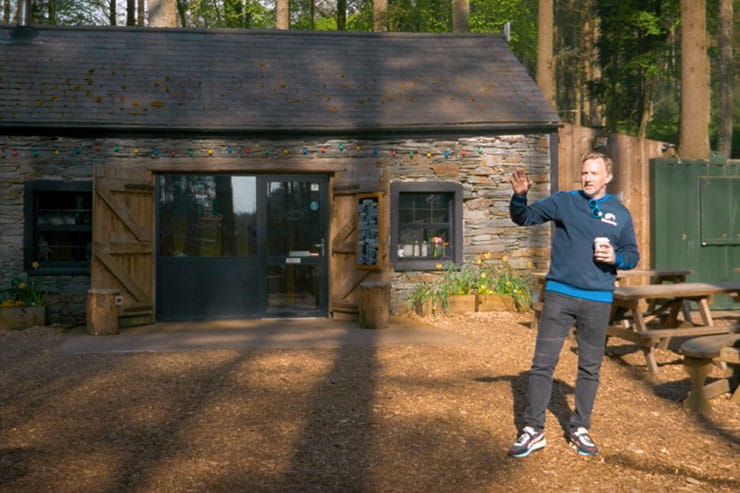 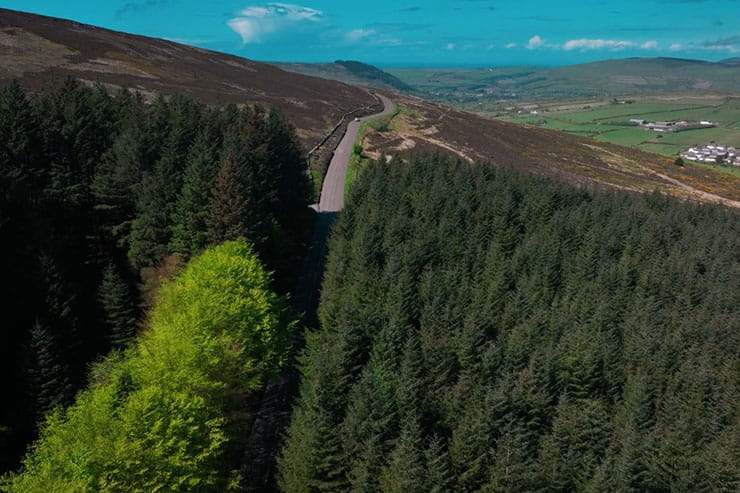 Not only is the beautiful little cottage, complete with wood burner, nestled in the gorgeous surroundings of the South Barrule plantation in the heart of the Islandand adjacent to the Ape Mann Adventure Park, it’s also on the edge of the A36, known by the locals as The Sloc Road. The road leads down into the south-west of the Isle of Man, and it’s a cracker (more about that in a future episode), so it’s worth diving into The Coffee Cottage for refreshments before, during or after a ride. There’s a handful of seats inside this dark, cosy building as well as park benches arranged outside, with a large parking area just 100 yards away.

This location is mainly used as a site to hire Segways, mountain bikes, quad biking, laser quest, and so on. 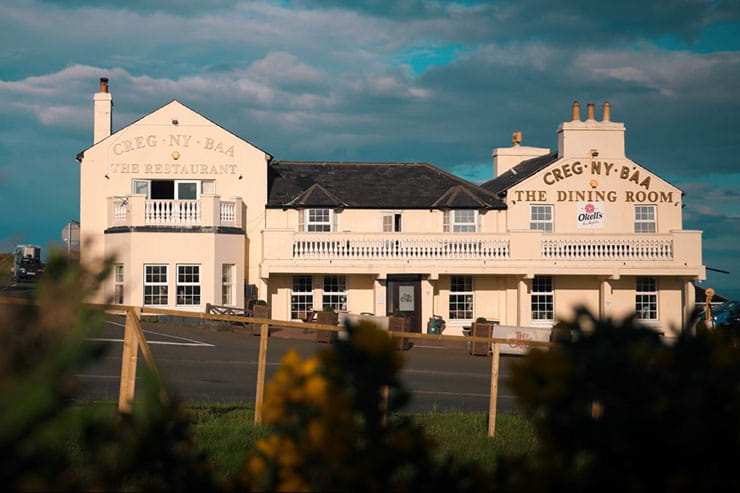 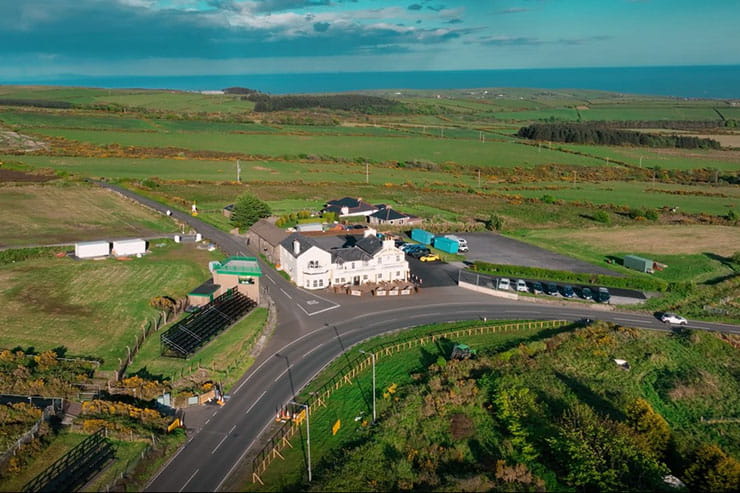 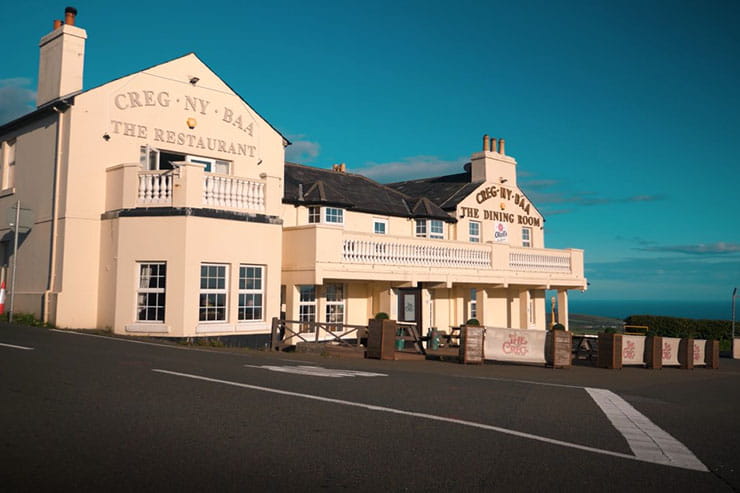 Probably the most famous place to eat and drink of them all here on the Isle of Man is The Creg-Ny-Baa, more commonly known as just ‘The Creg’. Based just after the 34th mile marker on this 37.73-mile-long TT course is this super popular place to watch the TT racing from as the bikes come from Keppel Gate and Kate’s Cottage towards the downhill right-hander, which is also very popular with the TT’s photographers.

Private dining rooms and separate balconies adorn the first floor, with TT photos and paintings on every wall, while downstairs is a much more traditional pub-dining set-up. An extensive menu includes all the usual pub favourites as well as a great chef’s special range. If a visit during the TT or Manx GP is on the cards, then get there early. There's stacks of parking available (though be careful of the slopes), and it's accessible not only from the Mountain Road but also via Laxey and the imaginatively named Creg-Ny-Baa Back Road.