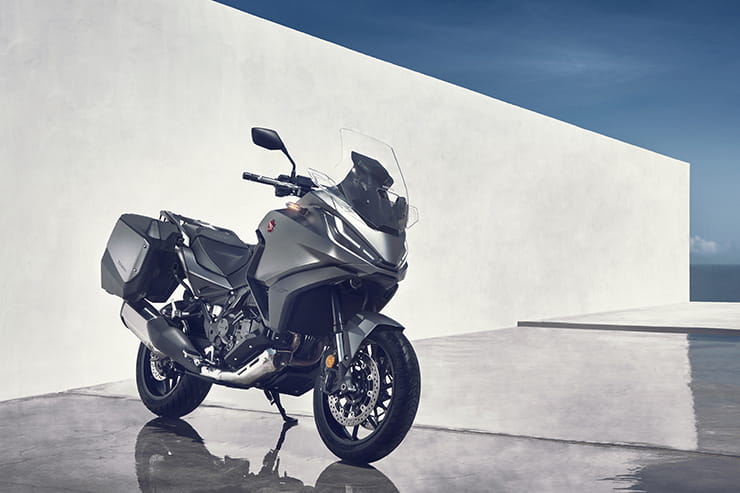 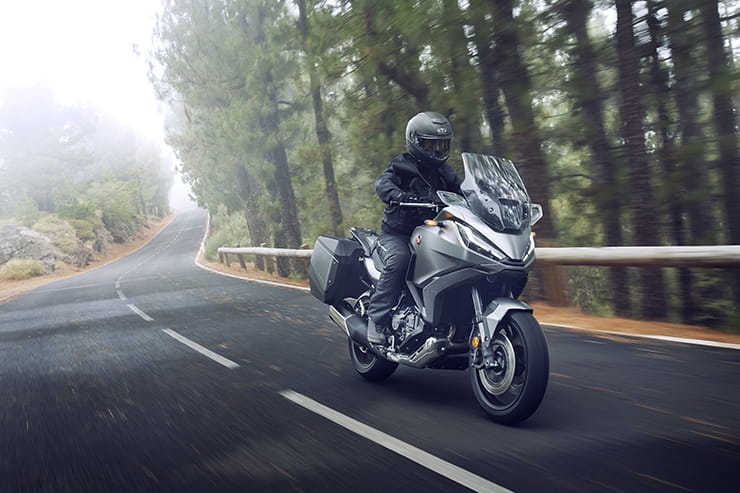 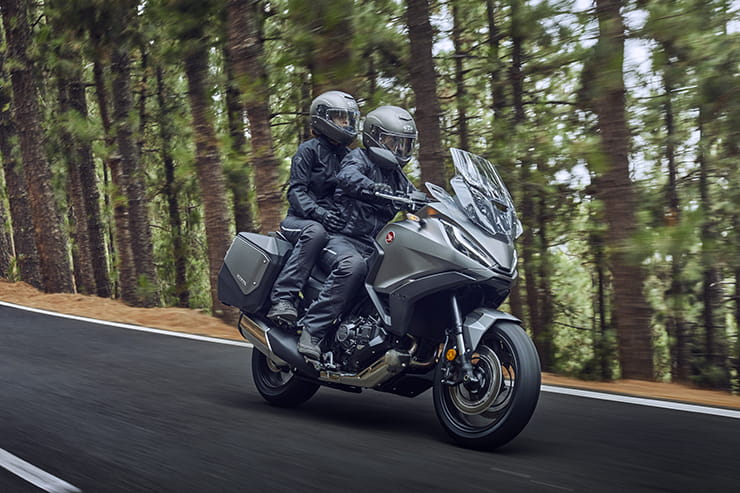 We revealed way back in February that Honda was planning to launch an Africa Twin-based tourer under the NT1100 name for 2022. Now it’s here and despite sharing its main parts with an on-trend adventure bike the NT is an out-and-out touring machine in the mould of several Honda favourites of the past.

Speaking about the bike’s inspiration, NT1100 Large Project Leader Koji Kiyono said: “At Honda we have a long tradition of catering for owners who desire a ‘traditional’ touring bike. Our previous Pan European and Deauville models have enjoyed a very loyal following for many years. So, when it came time to design a new touring model we wanted to produce something that would resonate – and appeal broadly – to these traditional touring bike customers.” 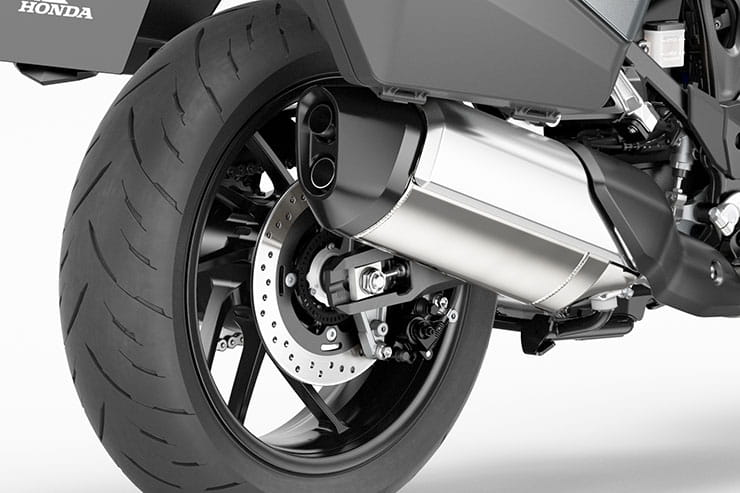 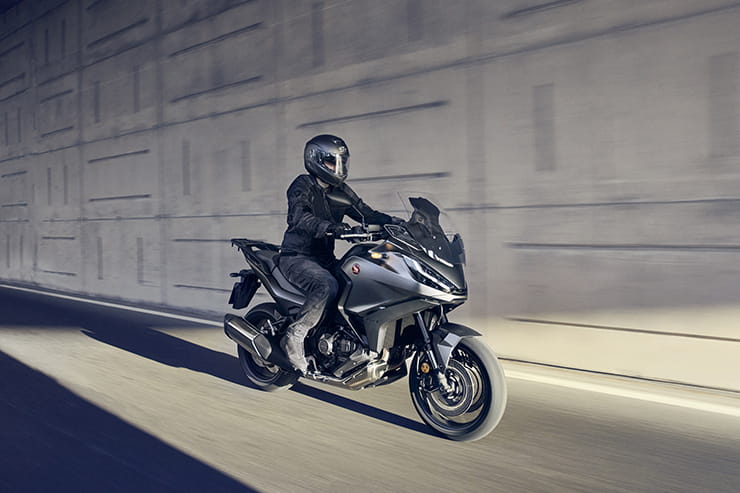 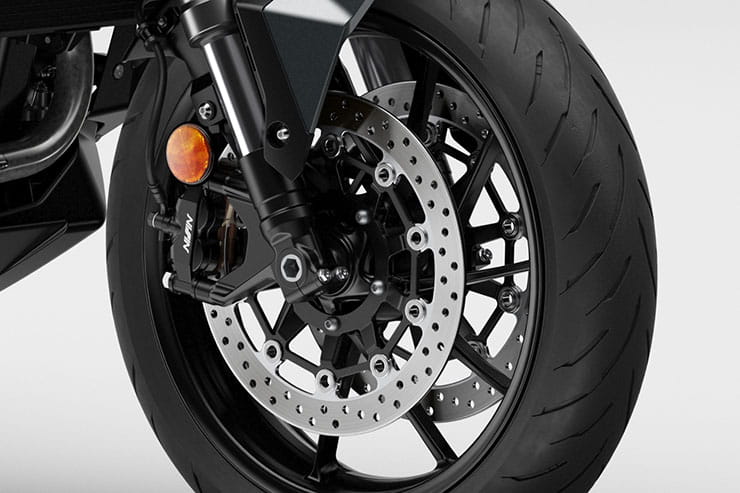 Although references to the Deauville and Pan European might conjure worries that the NT1100 will be a stodgy, staid machine, Koji Kiyono is keen to emphasise the NT1100’s handling prowess, saying: “We also wanted to stoke desire in riders of all ages and tastes who are looking for a genuinely new and versatile fun bike. That’s why we’ve created our new NT1100, offering thoroughly modern engine performance, a fun-to-handle chassis, a suite of modern technology and completely fresh, distinctive styling.”

Although we’ve long known the NT1100 will inherit the Africa Twin’s 1084cc, SOHC parallel twin engine – and it does, with power and torque figures of 101hp at 7500rpm and 77lbft of torque at 6250rpm – the motor gets fractionally tweaked with a revised intake duct and exhaust silencer. Less expected is the fact that the NT1100 also carries over the Africa Twin’s steel double cradle frame, allied to a bolt-on aluminium subframe, instead of getting a purpose-made chassis of its own.

Allied to Showa suspension at both ends – 43mm inverted SFF-BP forks with adjustable and a monoshock at the rear, both ends adjustable for preload and offering 150mm of travel – and a relatively short 1535mm wheelbase, Honda claims sharp handling. A 26.5-degree head angle doesn’t promise ultra-quick steering, but with a relatively light 238kg kerb weight for the base model the NT1100 should be a lot more fun than an ST1300 Pan European.

The use of radial brakes, with two four-pot calipers gripping 310mm discs at the front and ABS but – perhaps surprisingly – no linked braking system, emphasises the performance aspects of the bike. 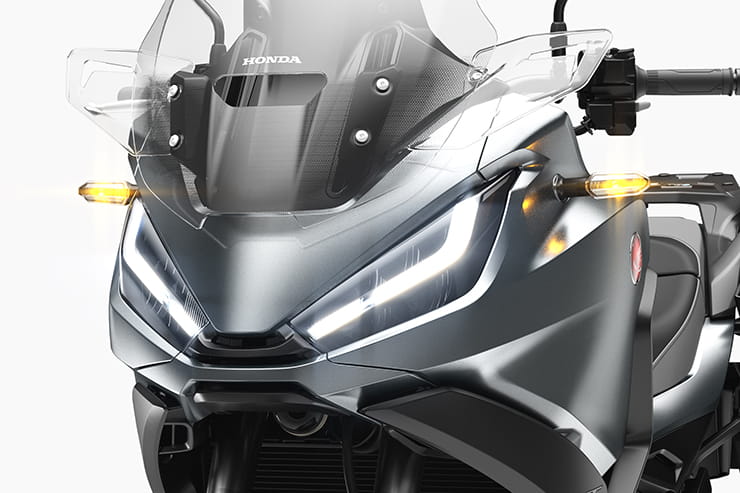 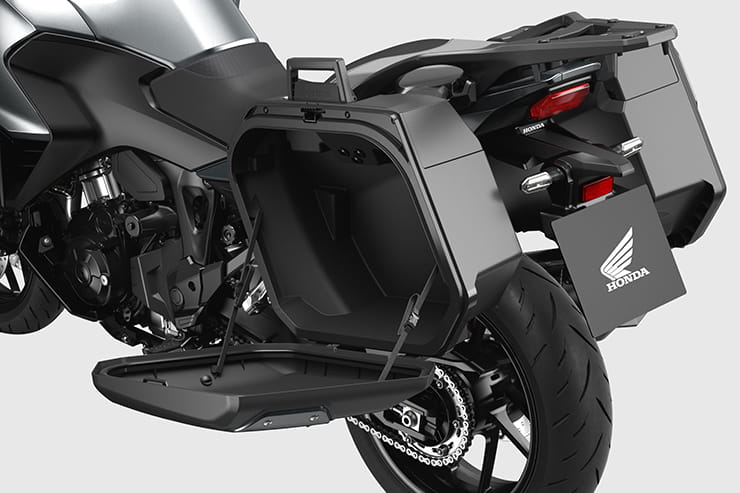 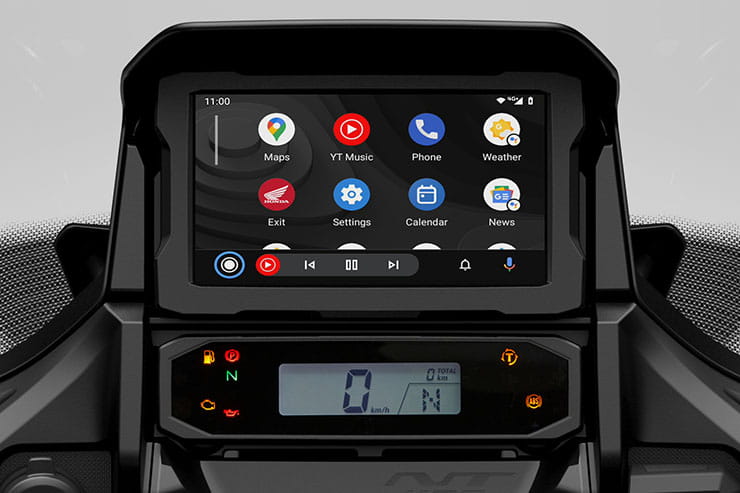 When it comes to styling, the main driver appears to have been aerodynamics and rider comfort, with Honda putting a lot of focus onto the five-height adjustable screen, with additional wind deflectors, and bodywork that manages to deflect air around the rider despite not being a complete full-fairing design.

Luggage is standard, with a pair of detachable panniers that offer a combined 65 litres of storage space (33 litres for the left, 32 litres for the right pannier, which sits above the low-slung exhaust silencer). A 50-litre top case with built in pillion backrest is an optional extra as part of either the ‘Urban’ or ‘Touring’ options packs. A large, 20.4 litre fuel tank gives a theoretical range of around 250 miles between fill-ups.

Even though it shares its chassis with the Africa Twin, the NT1100 manages a respectably low 820mm seat height.

Heated grips are standard, along with cruise control and Bluetooth connectivity via an instrument pack – shared with the Africa Twin and featuring a 6.5in colour TFT above a smaller LCD display – that includes Apple CarPlay and Android Auto as well as three display modes. 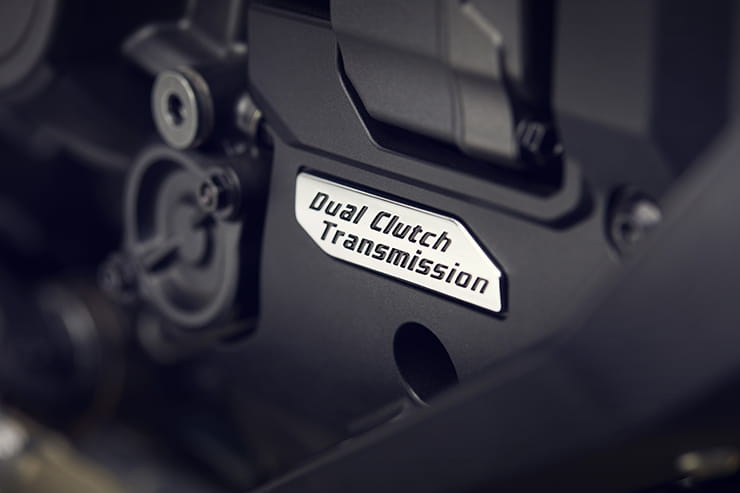 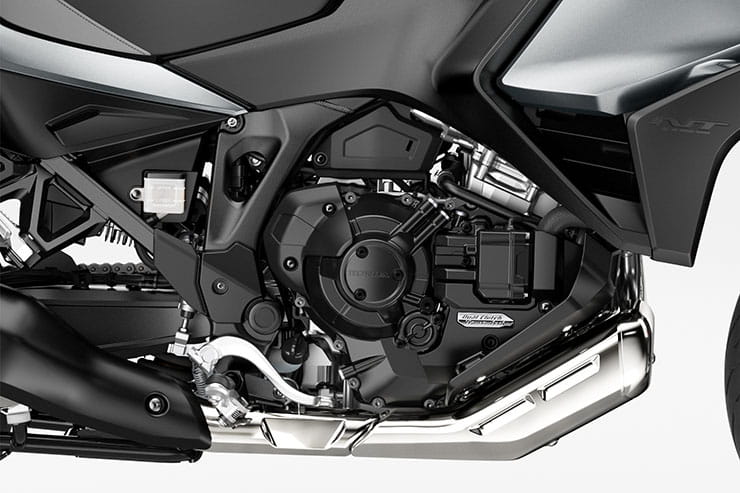 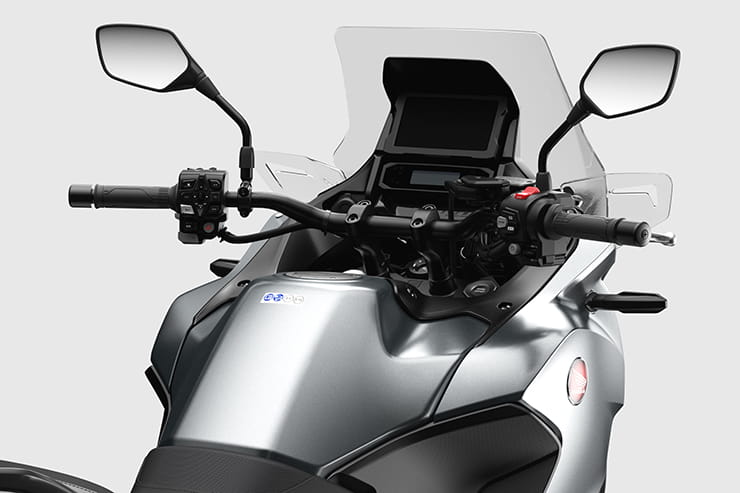 Like the Africa Twin it’s based on, the NT1100 can also be had with Honda’s DCT semi-automatic transmission. Based on the dual-clutch system that debuted on the 2009 VFR1200 and has appeared on a host of Hondas since then, the DCT box offers seamless changes thanks to the ability to select two gears simultaneously, shifting by simply disengaging one clutch and engaging the other. As on other models, the DCT box has both a fully-auto setting where it changes gear without any rider input – with four selectable settings to tailor the aggression of the changes and how long the engine holds each gear – and a manual mode allowing the rider to take control of shifts via paddles on the left bar.

As on other DCT models, the complex electro-hydraulic box adds 10kg to the bike’s weight, bringing the NT1100 to 248kg wet.

Opt for the lighter, cheaper manual version of the NT1100 and you can still experience clutchless shifts by adding a conventional quickshifter and autoblipper, available as an option. 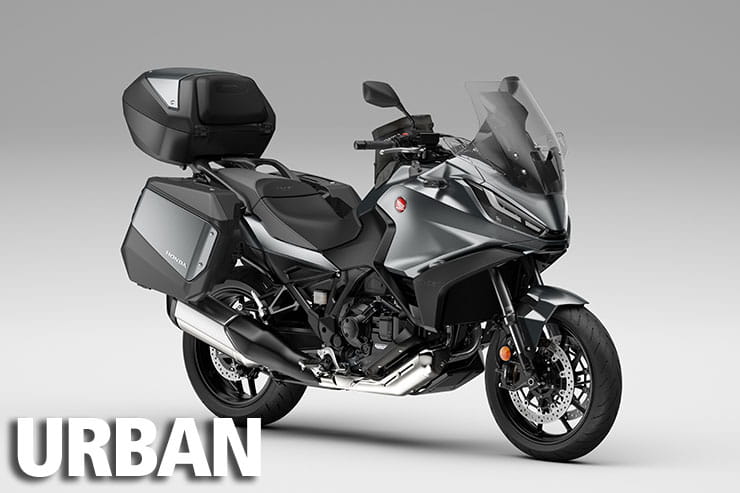 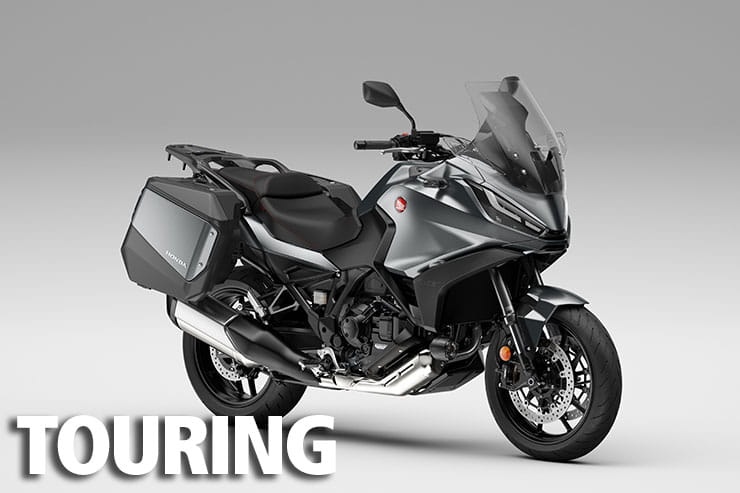 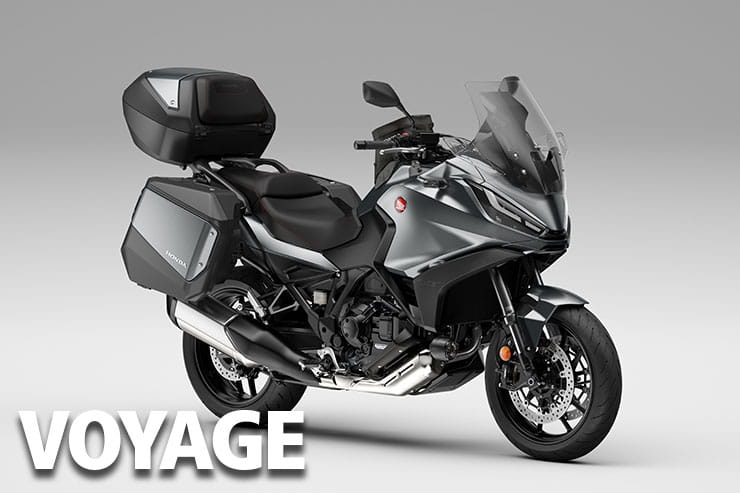 Other options include three packs (although the items in them can also be ordered separately). The first ‘Urban’ pack includes the 50 litre top box, comfort back rest and a 4.5 litre tank bag. The ‘Touring’ pack swaps the stock rider and pillion seats for ‘comfort’ versions, adds different pillion pegs and auxiliary fog lights, while the ‘Voyage’ pack combines the two – with the tank bag, top box, comfort seat and pegs, and fog lights all included.

In keeping with the NT1100’s subdued looks and its heritage in bikes like the Pan European and Deauville, the initial colour options are subdued, with the choice of ‘matte iridium grey metallic’, ‘pearl glare white’ or ‘graphite black’.

Dealers are expected to get demonstrate bikes in early January, with customer deliveries expected to follow in February or March 2021. 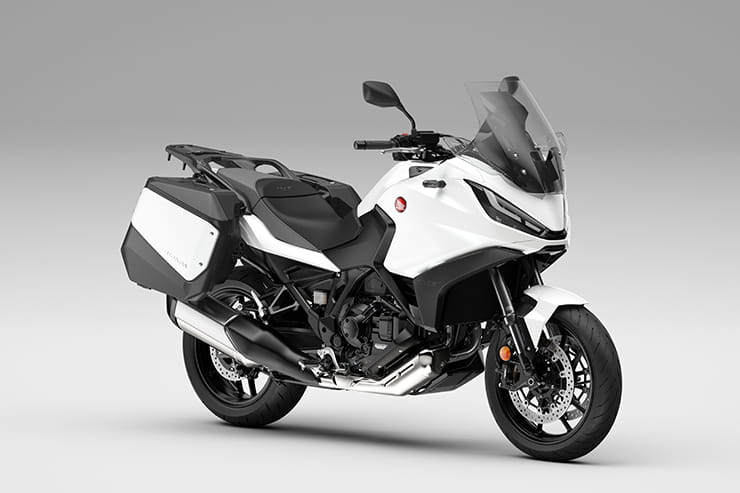 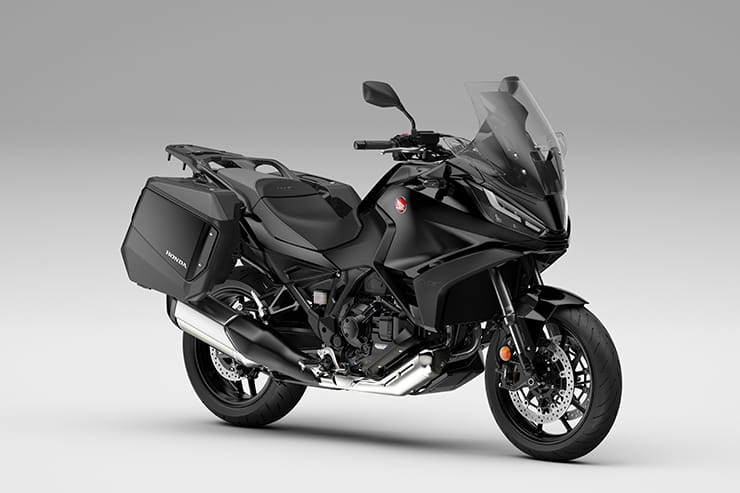 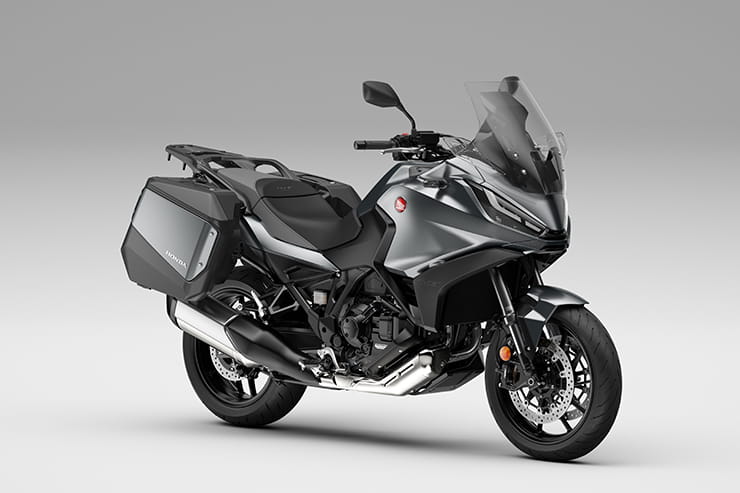