Between 1998 and 2013 Honda’s NT650 and NT700 Deauville was the go-to middleweight for riders who wanted the practicality of a tourer without the vast size that normally goes hand-in-hand with bikes in the class.

Now Honda is on the verge of bringing back the ‘NT’ with a completely new machine developed around the parallel twin engine from its CRF1100 Africa Twin and the new CMX1100 Rebel cruiser.

The firm’s plans are revealed by a new European trademark application that, once granted, will give Honda the right to use the name NT1100 on ‘motorcycles and parts and fittings for motorcycles.’

The rumour of an Africa Twin powered tourer has been circulating for a while, but the new trademark is firm evidence that the bike is happening. The trademark application suggests that Honda isn’t just thinking about making this bike; it’s something that’s already been given the go-ahead for production and now it’s just a case of getting the name right and ensuring nobody else will object to the use of the title. We previously reported that the Africa Twin based sports tourer might go under the ‘CB1100X’ name, but the NT1100 is likely to be the same project.

The launch of the Rebel 1100 as part of the 2021 range shows that Honda is keen to use the Africa Twin’s parallel twin engine and dual-clutch, semi-auto transmission on bikes that are a far cry from the original adventure model they were designed for. The CB500’s smaller twin appears in a wide range of models – the CB500X adventure bike, CMX500 Rebel cruiser, CB500 roadster and CBR500R sports bike – and the same applies to the NC700/NC750 engine that’s used in tourers, adventure bikes, roadsters and even the Integra and Forza 750 scooters, so why not do the same with the Africa Twin’s engine? 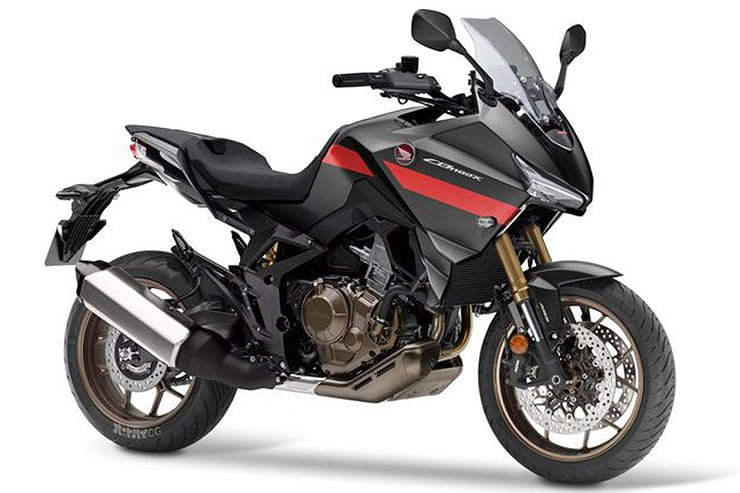 The NT1100 will fill a yawning gap in Honda’s tourer/sports tourer range. The old V4-powered ST1300 Pan European is long gone, as is the VFR1200F, and Euro 5 emissions rules mean the VFR800 is heading out of the door. That means the only touring bike Honda will have in its European line-up will be the Gold Wing, which is far too big and expensive for most riders to consider.

The 1084cc twin currently makes 101hp in Africa Twin form and 86hp in the Rebel 1100 cruiser, and we’d expect the NT1100 to use the more powerful version. That would give it roughly the same power as the old VFR800, with far more torque (the Africa Twin makes 77lbft at 6250rpm, where the VFR managed 55lbft and needed 8500rpm to hit it.) The numbers lag a little behind the old Pan European, which had an extra 200cc and two more cylinders to achieve 117hp and 86lbft, but the lightweight, compact design of the Africa Twin engine means the NT1100 will be a much wieldier machine than the old ST1300.

Both manual and DCT semi-auto transmissions are likely to be carried over, although the dual-clutch design with automated or push-button changes is likely to particularly well-suited to the NT1100’s expected touring role.

How soon can we expect to see the bike? At this stage, it’s not likely to appear before Honda reveals its 2022 model range but given the fact that traditional launch schedules have gone out of the window due to the coronavirus pandemic, it’s hard to accurately judge when that will be. ‘When it’s ready’ is probably the most accurate answer, and the trademark application means it isn’t too far from that stage.