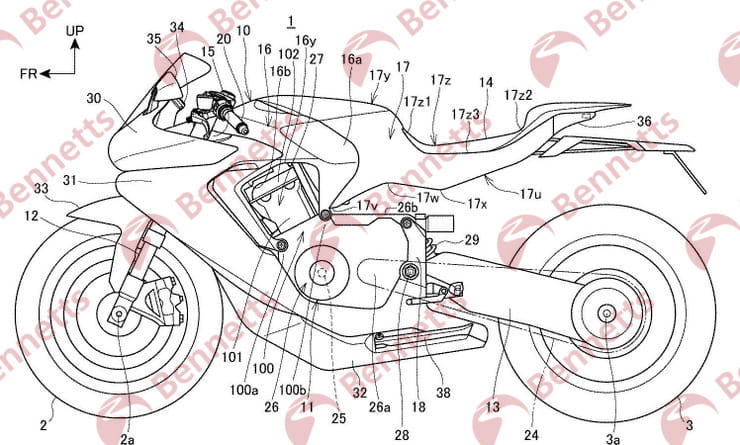 While the attention of motorcycle R&D departments all over the world is turning towards an electric future Honda’s massive research arm is working on a project that could turn out to be the ultimate evolution of the traditional petrol-powered superbike.

Newly revealed patent applications show an inline four-cylinder machine that combines a conventional four-cylinder engine – looking much like the CBR1000RR-R Fireblade’s unit – with a radical weight-saving chassis design. Unusually, the patent application includes details of many of the bike’s components rather than focussing on small specifics, giving a surprisingly clear view of the machine, including details like the instruments and bar controls as well as the unconventional frame that’s the document’s main focus. 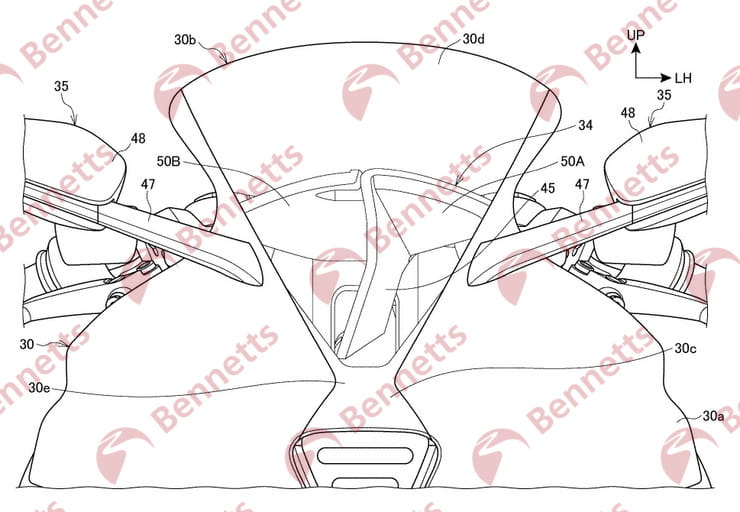 Visually, it would be easy to imagine the bike shown in the documents as a concept model, and there’s a chance that’s precisely what it was intended to be. Without the Coronavirus pandemic, the bi-annual Tokyo Motor Show would have been held around now, and it’s long been the traditional launchpad for concept bikes from Japanese brands, often hinting at future production models.

However, this design has a few details that could indicate it’s intended to be a genuine showroom model rather than simply a show stand head-turner. The patents include elements like the mirrors, licence plate bracket, lights and side stand – confirming it’s a road-going design rather than a racer – and there’s a notable lack of unrealistic, Tomorrow’s World-style futuristic tech on show, which is normally a staple for concept bikes. The design’s chassis layout might be unusual, but there’s nothing in there that couldn’t be manufactured using existing production tech. 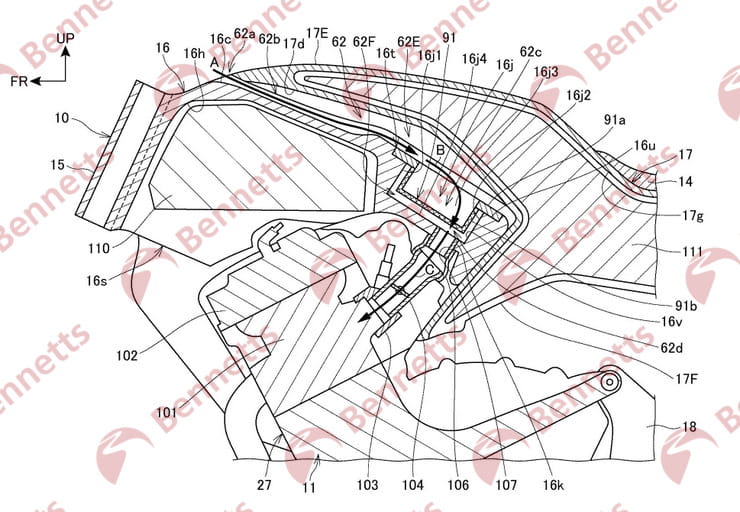 The main focus of the design is the frame, which is made of three main sections. At the front there’s an ‘n’ shaped, cast alloy section that bolts the steering head to the top of the engine, while also forming the bike’s airbox and, thanks to a monocoque-style, hollow design, features enough internal space to also hold the battery and electronics in a box behind the headstock.

At the back an aluminium reinforcement section bolts to the transmission, carrying the swingarm pivot and upper shock mount and providing brackets to hold the footpegs. Between those sections, the engine provides all the structural strength.

Frames like this aren’t unknown, of course. Ducati’s Panigale V4 also uses the engine as its structure, and the previous Panigale 1199/1299 V-twins had a monocoque upper section above the engine to hold the steering head. Honda itself also went through a stage of using half-frame designs, notably on the early-2000s 929cc and 954cc Fireblades as well as the VTR1000 and VFR800.

Where the new design really breaks with tradition is the third main structural element – a composite, self-supporting seat unit, moulded into a single piece and bolted directly to the upper/front aluminium frame section. This hollow composite section doubles as the fuel tank to keep the overall component count to a minimum. Honda’s patent specifically references elements of the bike intended to reduce production costs, suggesting that despite the large composite component, it’s not a money-no-object design exercise. 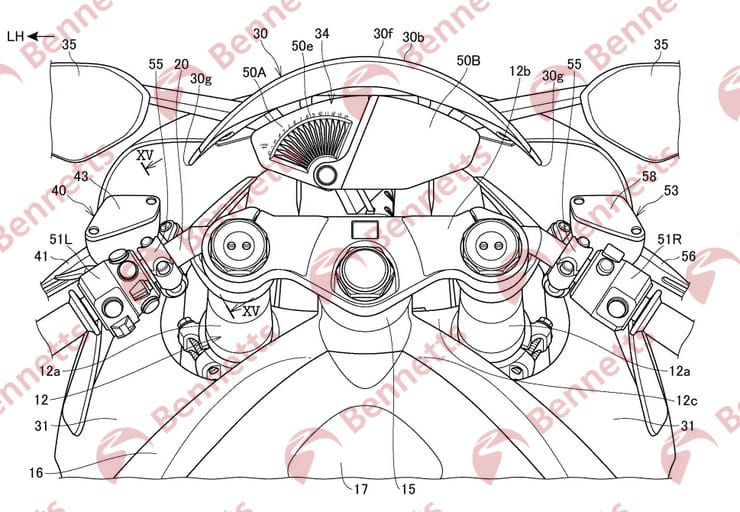 Away from the chassis, the patent gives a surprisingly clear view of details of the bike, including the instruments and bar controls. The dashboard combines an analogue rev counter on the left-hand side, reading to 14,000rpm, with a TFT touchscreen on the right to display other readouts. It’s modern, but not overly futuristic. It’s a similar story with the controls, which feature a few additional buttons on the left bar – presumably controlling the bike’s electronic functions – but otherwise look conventional. There’s no oddball, concept bike tech like semi-auto transmissions or active suspension on view, but the hydraulic master cylinders and reservoirs for the brakes and clutch are unusually neatly styled for a superbike.

The fork tops on view look like standard Showa parts, very much like those on the current CBR1000RR-R, with adjustment screws for compression and rebound, and at the bottom they hold similarly conventional, radial-mount four-pot brake calipers.

At the back, a single-sided swingarm acts on a normal monoshock that again looks like it probably comes straight from Honda’s existing parts bin. 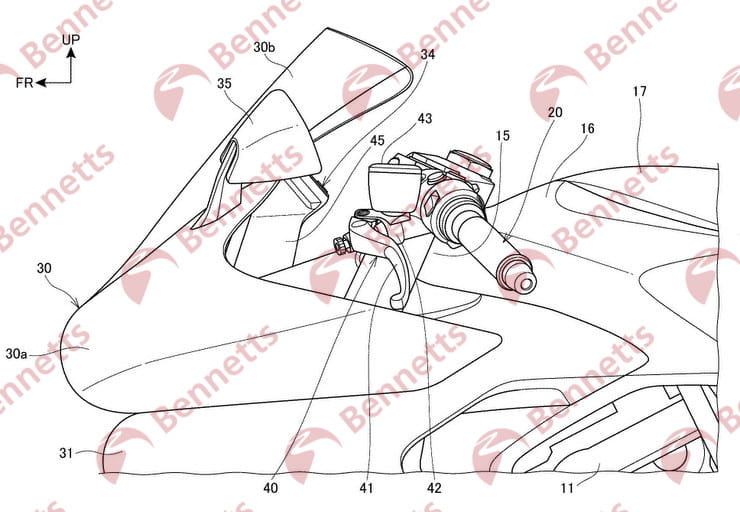 Although the existence of a patent is far from proof that a design will ever see the light of day, this one is unusual in both its detail and in how achievable it appears to be.

It’s been a long time since Honda has been able to claim supremacy in the superbike arena, with even the stunning current-generation CBR1000RR-R Fireblade struggling to make a mark in WSB, a field where Honda hasn’t taken a rider’s title since James Toseland’s Blade-mounted victory in 2007 and where the manufacturers championship has eluded the firm since 1997 and the era of the RC45. There are already rumours that the current Blade is to get an early set of revisions to improve its on-track performances, but perhaps in the longer term a radical superbike like the one seen here could be on the cards.