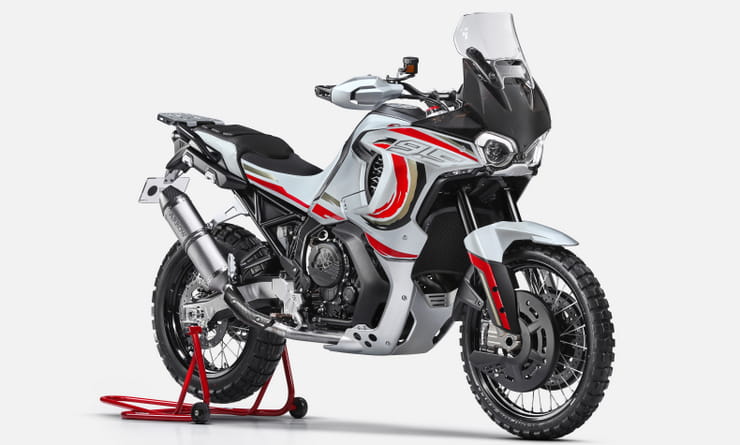 MV’s plan to enter the adventure bike arena with a Cagiva Elefant inspired model has been well known for a while but the company has sprung a surprise by revealing not one but two machines – both marking significant evolutions that will impact the entire MV model range.

Going under the name ‘Lucky Explorer’ in tribute to the old Cagiva Elefant Lucky Explorer rally-replica models and sporting an evolution of the original bike’s Lucky Strike based paint scheme, the two bikes are set aside by their designations – ‘9.5’ for the larger machine and ‘5.5’ for the smaller one. 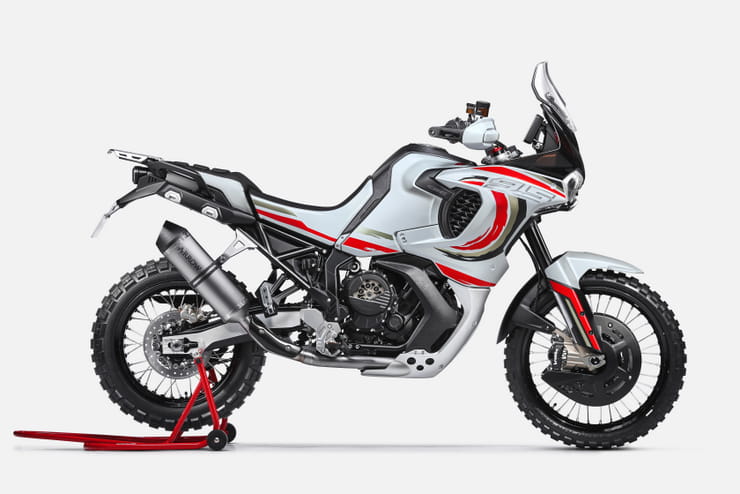 We’ll kick off with the Lucky Explorer 9.5, as it’s in more familiar MV Agusta territory. The engine is a significant development of the existing three-cylinder unit from the F3, Brutale 800, Dragster 800, Turismo Veloce and Superveloce models.

The 9.5 name reflects a capacity increase from 800cc to nearer 950cc – with an exact capacity of 930.63cc (we’ll call it 930cc, shall we?). Targeting torque, the size increase means a new cylinder head, bigger bore cylinders and pistons, a longer-stroke crankshaft and a host of other changes to the engine, effectively altering all the main components. Power is rated at 123hp and 10,000rpm, somewhat less than the higher-revving 800 version manages, but torque is vastly increased to 75lbft at 7000rpm.

That engine sits in a steel frame, as befits an adventure bike, with an aluminium swingarm and Sachs electronically-adjustable suspension at either end. Weight is 220kg dry, so it’s not a feather by any means, but MV has taken the bike’s adventure intentions seriously, with a 21in front and 18in rear wheel. 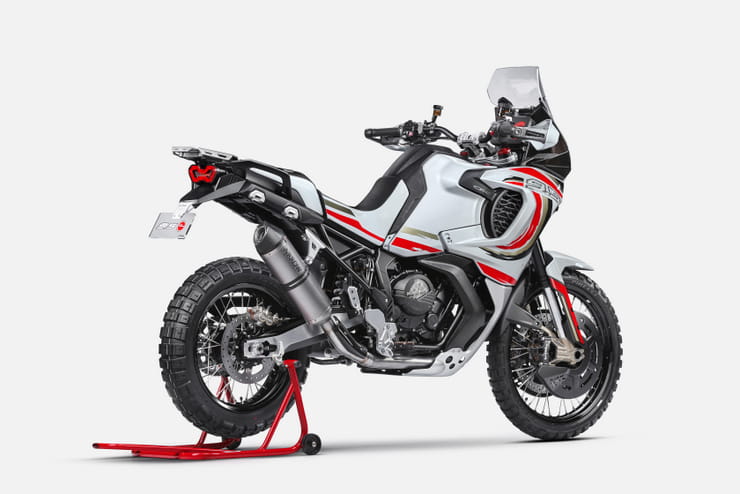 To compete with the Honda Africa Twin, MV will offer two versions of the bike. One has a normal, manual transmission (with a quickshifter, of course), the other uses a Rekluse automatic clutch with the option of electronically-actuated gearshifts – making it an alternative to the DCT version of the Africa Twin.

As you’d expect from a high-end machine, there’s plenty of other electronic goodies on offer, including a large, 7in TFT screen, Bluetooth, cruise control, launch control, 8-level traction control and GPS. The Continental ABS brakes also offer cornering functions and rear wheel lift mitigation, while the calipers are Brembos.

The bodywork features forged carbon fibre, emphasising the 9.5’s high-end status, while the LED headlights include a cornering function to illuminate the inside of turns. 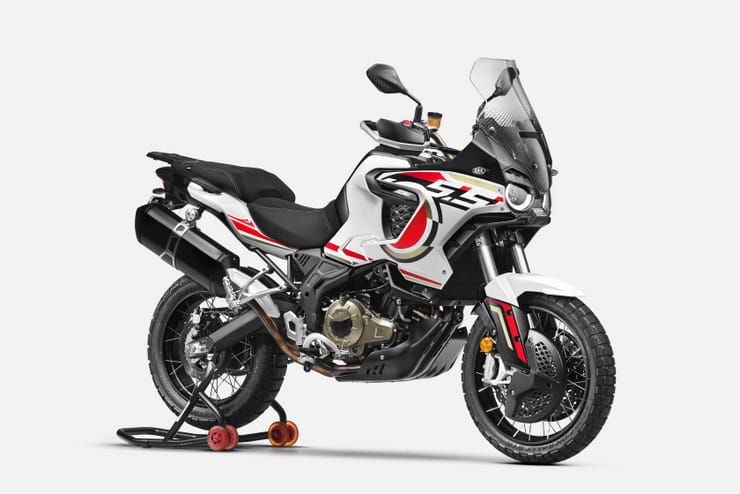 It’s the first fruit of MV Agusta’s tie in with Chinese giant Qianjiang – owner of QJMotor and MV’s former rival, Benelli. Back in September 2020 we revealed the Benelli’s deal to use MV Agusta’s 1000cc four-cylinder engine for future models, and the flip side of that arrangement is that MV gets to access Qianjiang and Benelli’s smaller-capacity engines and models.

The Lucky Explorer, therefore, is mechanically near identical to the QJMotor SRT500, itself a derivative of the existing Benelli TRK502 which, importantly for MV, has been one of Italy’s best-selling bikes this year. For the MV version, the engine is increased from 500cc to 550cc (something that’s also happening to the QJMotor models, as we revealed earlier this year). Power is pegged at 47hp, making the 5.5 an A2-licence-legal machine, while its dry weight is the same as the larger 9.5 at 220kg. The steel frame appears identical to the QJMotor and Benelli models, while the alloy swingarm is the same as the Chinese market QJMotor SRT500’s. Suspension comes from KYB, the same brand used by Benelli and QJMotor, while the MV gets Brembo brakes. Unlike the rest of MV’s range, the ABS comes from Bosch – again suggesting it’s ported directly from the Benelli/QJMotor offerings.

Where the MV Agusta really wins, though, is in its styling. With bodywork that mimics the old Cagiva Elefant Paris-Dakar racers, it’s a much more attractive machine than either Benelli or QJMotor’s versions. 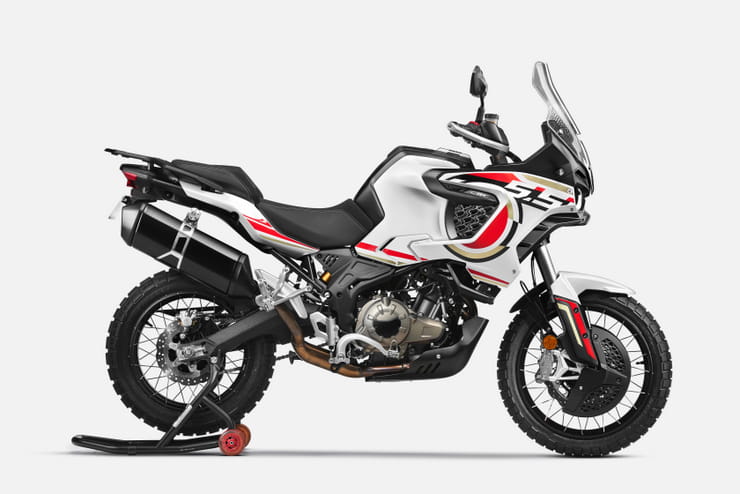 Of course, arguably the biggest rival to MV Agusta’s new adventure bikes, and particularly the larger 9.5, will be Ducati’s DesertX, due to be launched next month. With around 110hp from a 937cc Testastretta V-twin, the DesertX is particularly notable because it is also a direct descendant – and tribute to – the Cagiva Elefant. The prototype Scrambler DesertX shown in 2019 (albeit with a less powerful, air cooled engine) even featured similar colours to the new MV Agustas, harking back to the old cigarette-sponsored Lucky Strike race bikes.

How do two rival firms end up leaning on the same heritage? The answer, of course, is that during Cagiva’s Paris-Dakar racing years in the 1980s and early 90s, Cagiva, Ducati and MV Agusta were all part of the Castiglioni motorcycle empire. The Cagiva Elefant used a Ducati V-twin engine. However, when Ducati was sold to the Texas Pacific group in the 90s, Claudio Castiglioni kept hold of the Cagiva and MV brands, using the sale money to relaunch MV Agusta and develop the F4 superbike. Now, with the Cagiva brand name in limbo (although it's earmarked for a comeback, potentially as an electric bike company, in the future), both Ducati and MV Agusta can legitimately bask in the company’s former glories. 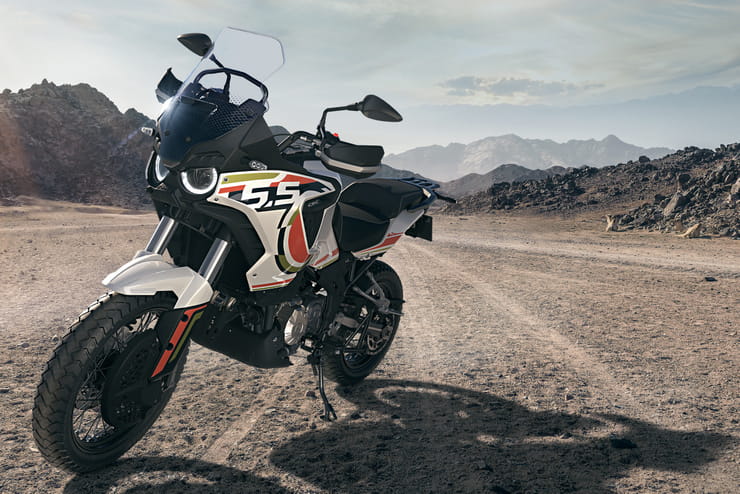