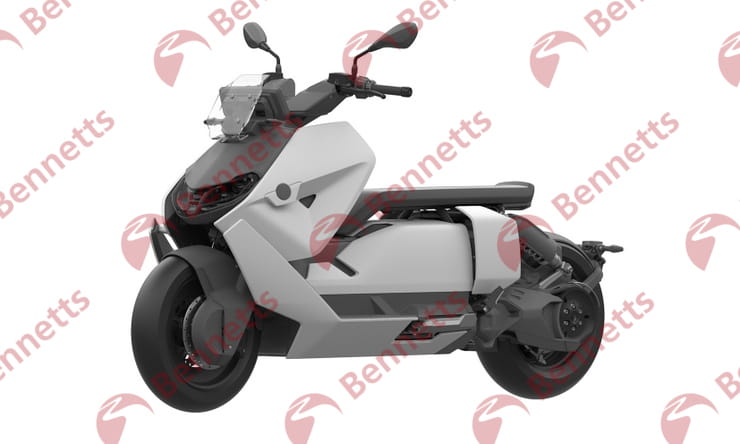 We know that BMW is preparing to make a huge onslaught into the electric bike market after it trademarked a host of names for ‘DC’ branded motorcycles and ‘CE’ titled scooters. Now the first of them – the CE 04 – is making its way to production and these BMW design images show the final showroom-ready version of the machine.

BMW has already teased this bike twice. It first emerged in stylised form as the ‘Concept Link’ back in 2017, and resurfaced last year nearer its production form as the ‘Definition CE 04’ concept. Now these design images, from an official BMW intellectual property filing, show what the mass-produced version of the bike will look like. 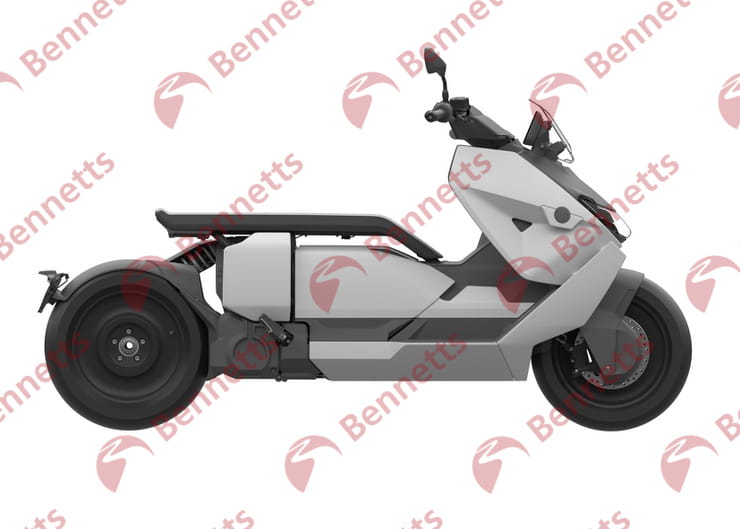 While concepts are usually watered-down before reaching production, sometimes with disastrous results (we’re looking at you, Suzuki B-King), the CE 04 is basically identical to the ‘Definition CE 04’ concept and pretty close to the original ‘Concept Link’ in both its shape and its technology.

Differences, compared to the Definition CE 04, are basically limited to the addition of road-legal necessities; mirrors, for instance, and a longer rear mudguard that holds the rear indicators and number plate bracket. Front indicators, also missing from the concept bike, have been attached either side of the unusual Perspex wind deflector that sits ahead of a wide TFT dashboard. 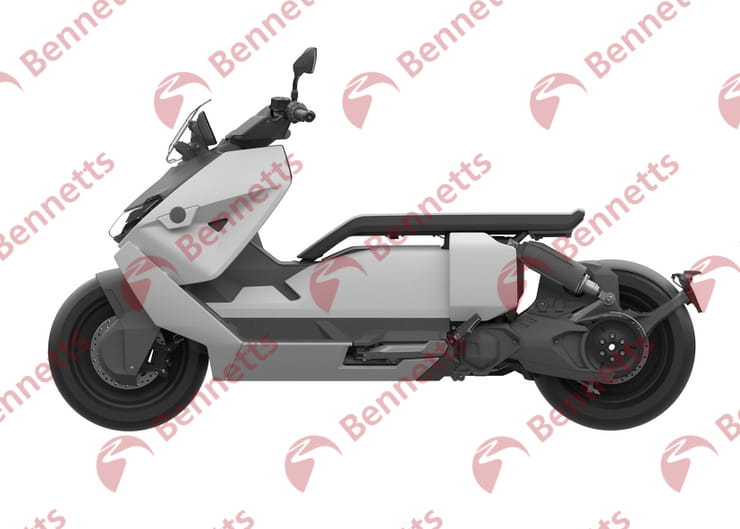 The patents also give us a glimpse of the bike’s technical aspects, thanks to images that show it from every angle including directly below.

Underneath, the battery pack stretches the full length of the foot board, and despite the bike’s scooter-style appearance, it’s far from being a step-through as that battery pack rises fairly high between the rider’s legs. The motor is mounted right behind the battery, driving the rear wheel via a reduction gear and a belt final drive. There’s no clutch or gearbox, of course, making the CE 04 a simple twist-and-go in terms of operation.

Unlike a typical scooter, the motor isn’t mounted on the swingarm, which is a single-sider that pivots just behind it. The layout is a development of the pattern seen on the BMW C-Evolution, but heavily refined to be more efficient and compact. Differences include a larger-looking motor and the reduction gear being mounted at its output shaft, where the C-Evolution has its reduction gears at the rear hub. 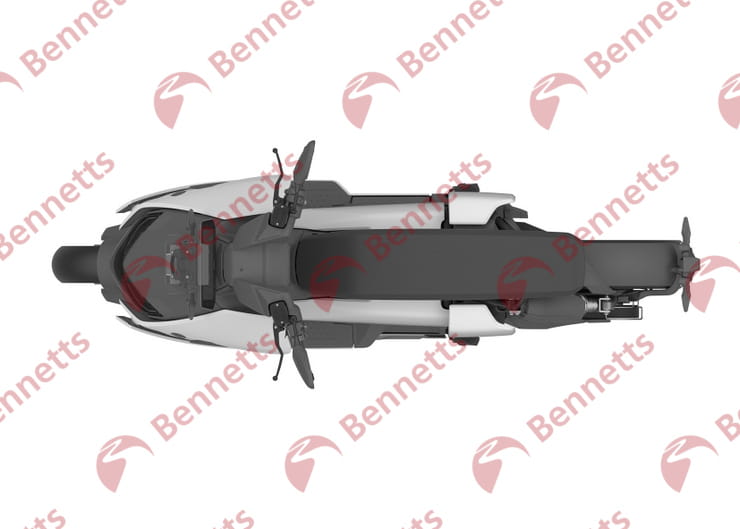 Twin front brakes with radial-mount calipers hint at performance levels far beyond those you’d expect from a typical scooter, but despite putting extensive cowls over the front wheel hub it doesn’t appear that BMW has done anything radical like adding a hub-mounted second motor for two-wheel-drive.

The forks, while hidden by bodywork, are conventional telescopics, and a tubular steel frame wraps around the battery to provide the bike’s structure.

The ‘floating’ seat design of the concept bike is kept for the production model, although the patents don’t show the central hump that separated the rider and pillion sections on the Definition CE 04 concept. That hump was a removable part, though, so it could be fitted to the production model or – perhaps more likely – offered as an extra-cost option.

Interestingly, the disc-style wheels of the concept bike have made it to the production version, even though prototypes were tested with more conventional spoked wheels. It’s not clear yet whether those discs are integrated into the wheels themselves or if they’re cosmetic and aerodynamic covers. 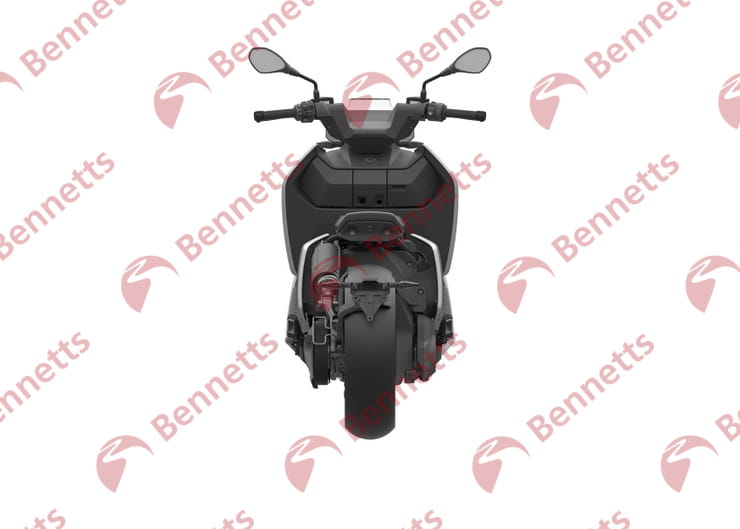 The CE 04 is just the first of a range of electric bikes expected from BMW. The company has also trademarked the name ‘CE 02’ – suggesting a smaller, lower-performance electric scooter model will join it – and a host of ‘DC’ names, from DC 01 to DC 09, for full-sized electric motorcycles.

The Vision DC Roadster concept shown in 2019 hints at how those motorcycles will look, and given how closely the CE 04 follows the 2017 Vision Link concept in its style, there’s an increasingly good chance that BMW’s electric street bike will be much closer to the Vision DC Roadster than we might have expected at its unveiling. With the CE 04 expected to be launched later this year, four years after the Vision Link was shown, it makes sense that the first ‘DC’ electric motorcycle will come in around 2023, with a close-to-production show model being presented in the meantime, perhaps later this year. 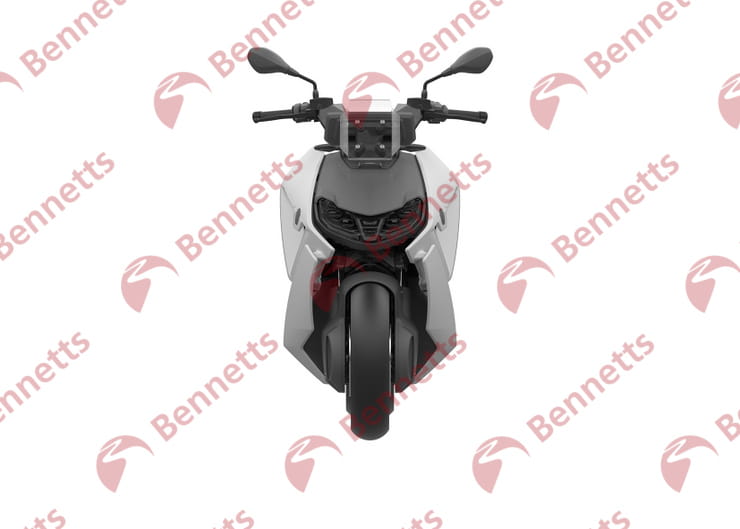