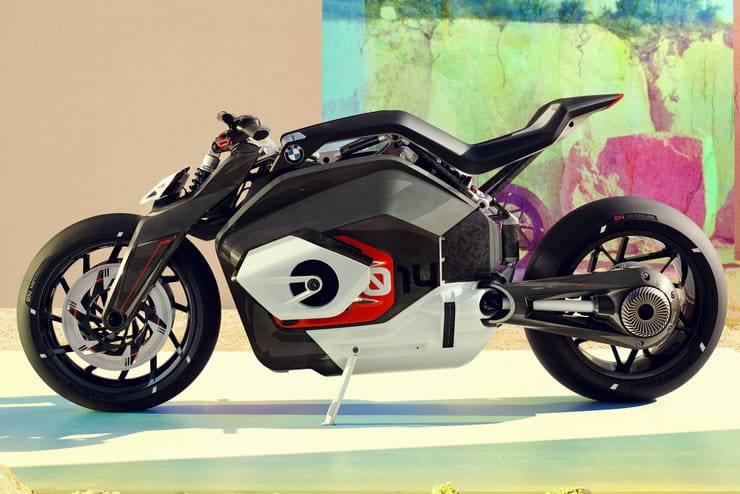 One of the huge challenges for bike firms as they transition into the seemingly-inevitable electric-powered future is how to maintain the visual identities that they’ve spent decades cultivating. We’ve already seen – with the LiveWire – how Harley-Davidson is going about it and now BMW has dropped a huge hint at its future electric direction with the new Vision DC Roadster.

As part of its ‘Vision’ range of show bikes, the DC Roadster shouldn’t be interpreted as a near-production model. BMW tends to reveal its production-preview machines under the ‘Concept’ name – the Concept 90, Concept 9Cento and most recently the Concept R18 are examples – while the term ‘Vision’ is retained for wilder, more speculative ideas. But even so it’s a clear indicator that BMW is taking an increasingly serious look at how to create a distinctive style without a petrol engine as its centrepiece. 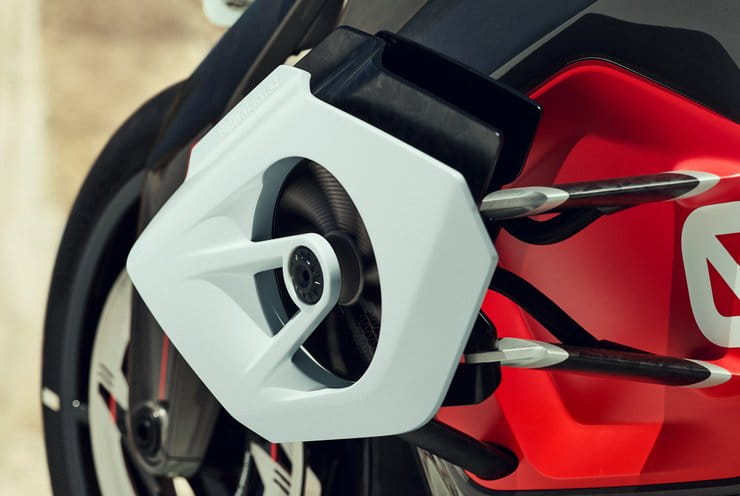 BMW Motorrad’s styling boss, Edgar Heinrich, said: “The boxer engine is the heart of BMW Motorrad – an absolute stalwart of its character. But BMW Motorrad stands for visionary zero-emissions vehicle concepts, too. In view of this, one question that arises is: what would happen if we were to replace the boxer engine with an electric motor and the required battery? The Vision Bike shows how we’re able to retain the identity and iconic appearance of BMW Motorrad in distinctive form while at the same time presenting an exciting new type of riding pleasure.

“After all: anyone who’s ever tried it out in practice knows very well that riding on two wheels is just as exciting when its electrically powered! The high level of torque right at set-off makes for breath-taking acceleration. This almost brutal power delivery creates a whole new experience of dynamic performance. And the BMW Motorrad Vision DC Roadster puts a face to this experience.” 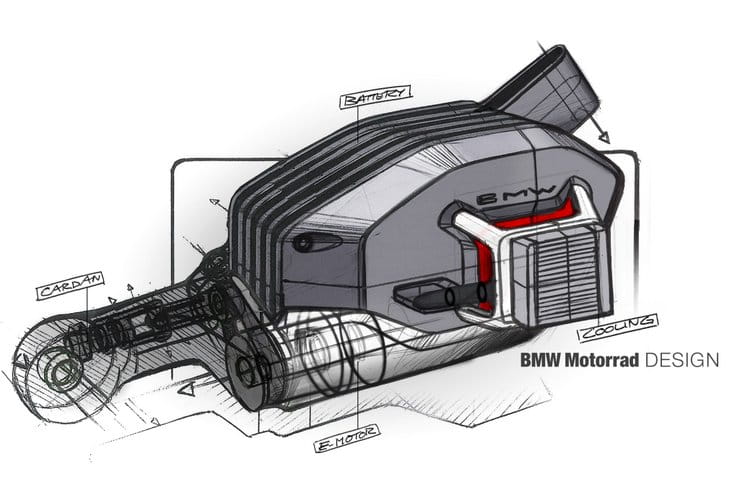 BMW explains that the challenge with electric bikes isn’t packaging the motor: compared petrol engines, electric motors are relatively small. Instead the issue is how to incorporate the battery into bike’s design.

So on the Vision DC Roadster, BMW has put the battery in the middle, mounted vertically where we’d normally expect to see the crankcase. And in a tribute to its boxer heritage, BMW has put extended side parts onto the battery with cooling fins – fed by fans – that sit where the cylinders of a boxer engine would normally be. These side elements actually move outwards when the bike is ‘started’ to protrude further into the airstream.

The electric motor itself isn’t visible on the finished Vision DC Roadster, but it’s mounted longitudinally underneath the battery pack, effectively filling the bike’s bellypan. The longitudinal mounting is unusual but fits with BMW’s heritage and allows the use of a shaft drive. 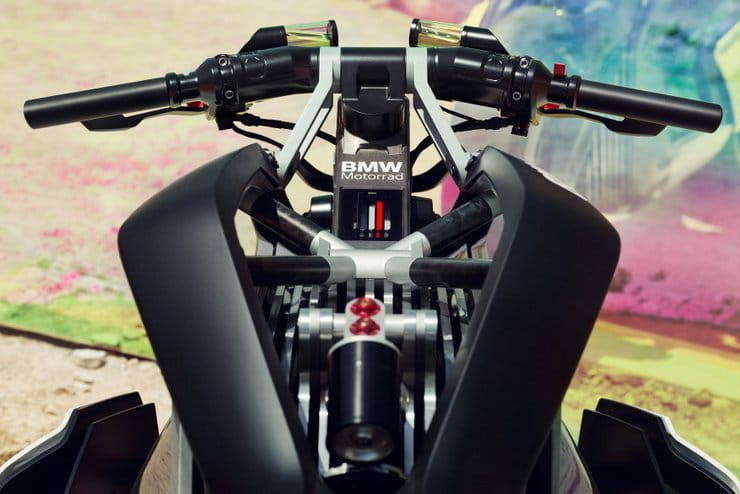 While the firm has put a lot of effort into recalling its petrol-powered heritage, electric bikes also offer a host of new possibilities. Notably, while there’s a massive battery to fit in there, there’s no need for a fuel tank anymore.

On many electric machines, its space is filled with a storage box or something else that’s visually familiar, but BMW has opted to simply leave a hole. There’s a composite seat subframe that runs all the way to the front of the bike, but it’s supported by carbon-fibre tubes so if you’re sitting on it, glancing downwards gives a view deep into the middle of the bike, with the top cooling fins of the battery on display. 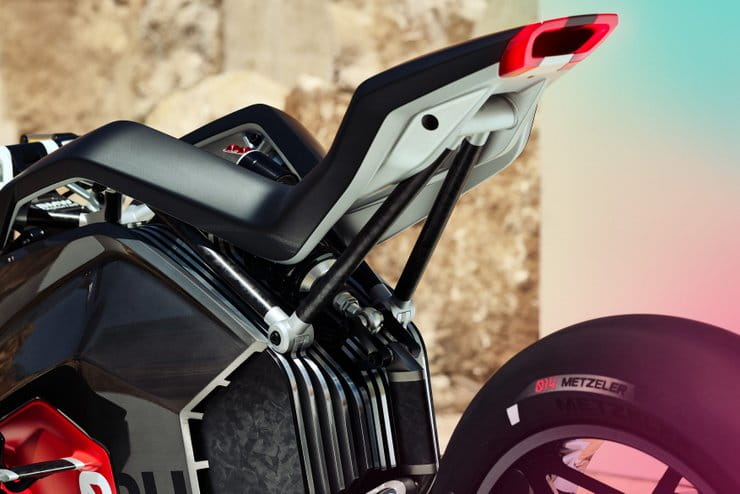 Those carbon tubes are largely glossed over in BMW’s press material, but in some ways they could be the most revealing part of the entire concept.

Several years ago, BMW patented two methods of making carbon-fibre motorcycle frames. One was a traditional beam frame, and that patent turned into reality in the form of the firm’s exotic S1000RR-based HP4 Race superbike. The second was a patent for a much cheaper, simpler way to use carbon in a frame design. It used carbon tubes and aluminium fixings exactly like the ones seen here. The original patent showed that the design could be used instead of the sort of steel trellis frame that BMW already uses on its R-series boxer bikes. So while the Vision DC Roadster’s electric powertrain could still be some way off, we might well see a conventionally-propelled machine using this sort of carbon-fibre frame design. 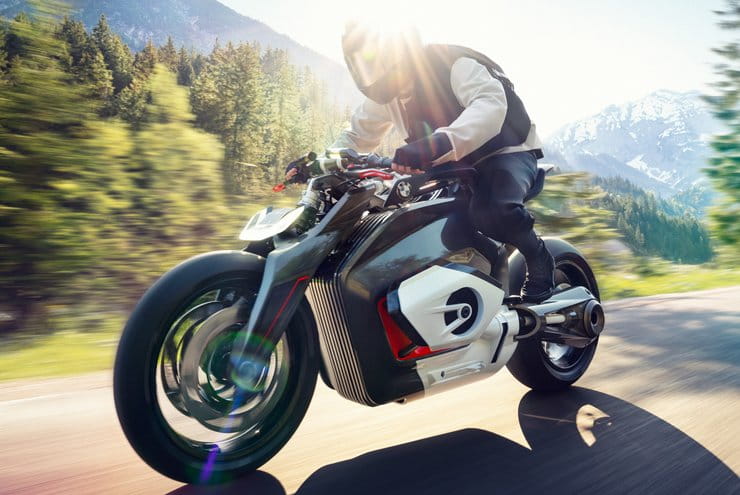 Diving back into the more conceptual elements of the DC Roadster, the design also hints at how the firm’s overall styling direction – regardless of power source – could evolve. The Duolevel forks are already a well-established part of the firm’s armoury, but haven’t been combined with the boxer-engined styling elements before, instead being used on the BMW’s four and six-cylinder K-series models.

The headlight shows how LED technology is set to open up new possibilities for the shape and size of lights, and there’s an interesting idea in the use of reflective dashes built into the sidewalls of the Metzeler-made tyres, intended to make the bike easier to see in the dark.

BMW has also created a two-piece riding suit to go with the Vision DC Roadster, with an unusual lopsided rucksack that uses magnets rather than traditional straps to attach to the suit’s jacket.