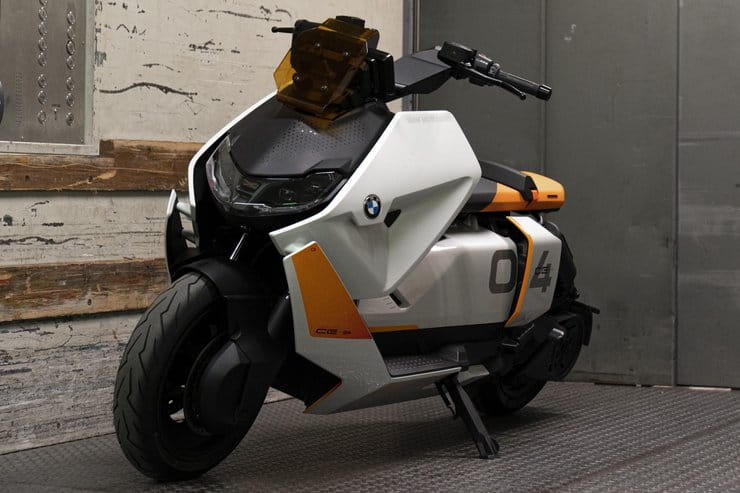 Although still officially a concept bike BMW’s new Definition CE 04 lays the template for the firm’s next generation of electric scooters – and we’re expecting it to reach production in virtually unchanged form.

If it’s vaguely familiar, that’s because BMW has already shown a concept with a very similar look. Way back in 2017 the firm revealed its ‘Concept Link’, which previewed many of the styling and engineering solutions adopted by the Definition CE 04.

Back in August we were the first to reveal BMW’s plans for two new ranges of electric bikes, with the firm filing trademarks for the names ‘CE 02’ and ‘CE 04’ for scooters as well as nine designations for future electric motorcycles – ‘DC 01’ to ‘DC 09’. So we know that this machine is just the first salvo in the firm’s efforts to bring electric two wheelers to the masses, and while in-depth information on the bike’s technical elements is still scant, the indications are that it represents an impressive rethink of some of the core elements of electric scooters and the way they’re used. 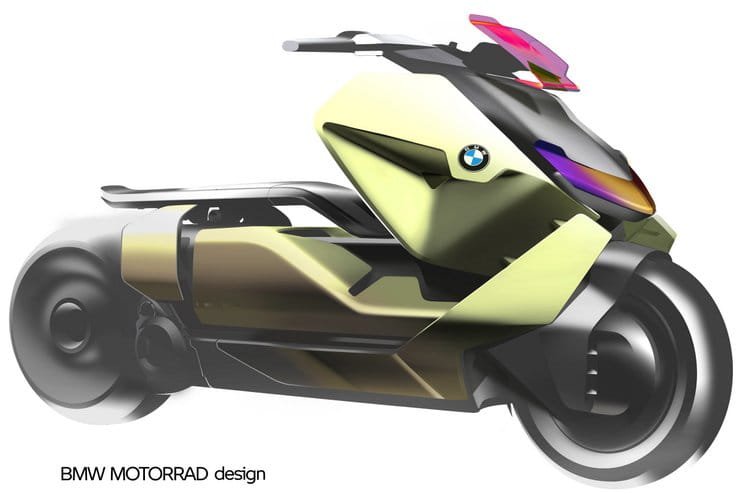 Of course, BMW has been plugging away at the electric bike market for longer than any other major manufacturer. Its C Evolution first appeared back in 2011 as the Concept e, and reached production in 2014. While sales have never been strong, it means the firm has a solid footing in both the technology and the market for electric bikes, learning lessons to be taken on for its next generation models.

Edgar Heinrich, Head of Design at BMW Motorrad, said: “The BMW Motorrad Definition CE 04 is the logical continuation of the electromobility strategy for urban conurbations and provides a concrete preview of what a contemporary production vehicle could look like, with which we will take two-wheel electric mobility in metropolitan areas to a new level, both technically and visually.”

Alexander Buchan, Head of Vehicle Design at BMW Motorrad, adds: “The technical realities of electric drive – such as the flat energy packs in the underfloor and the compact drive train – allow us to create a highly distinctive design which defines a new, urban aesthetic and which differentiates itself clearly from conventional styling. A design that follows the basic needs for simple functionality, clear aesthetics and the digital reality today’s users live in. The new architecture has led to a visual revolution and has produced many new design themes. Maybe it will polarise, but it will definitely stand out.” 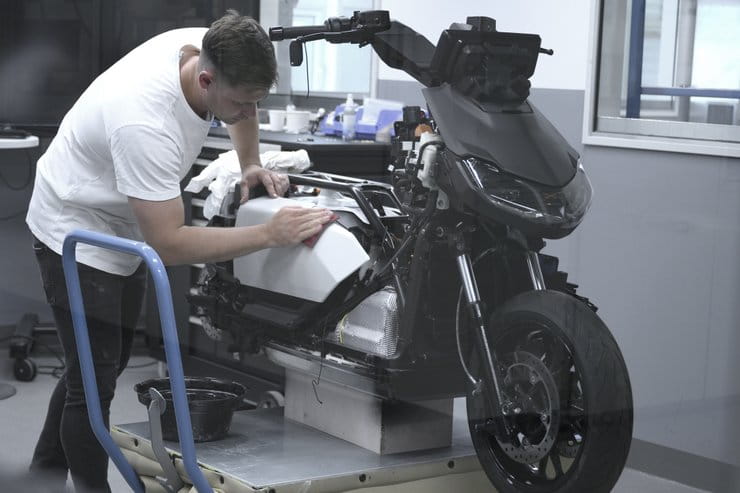 The CE 04 is built around a long, flat battery (flat as in slim, not depleted) that runs along the bike’s floor. It lends itself to new styling ideas like the seat, which appears to float above the main structure of the scooter, and to its side-opening, illuminated storage area – big enough to accept a helmet despite moving away from the usual under-seat arrangement.

While BMW hasn’t talked about the CE 04’s performance or range yet, it’s hinting that due to its city-oriented intentions it doesn’t need either to be exceptionally great.

“A scooter is not a “fun bike” which is taken for ride in the mountains in fine weather, but a practical everyday vehicle for driving from home to the office or meeting friends in the evening - simply a vehicle for every day in the city,” says Alexander Buckan, “That’s why we dealt intensively with the design of the drive and energy storage system in order to make it meet the needs of the actual user: The urban target group mainly rides short distances of approx. 12 km per day. Long-distance comfort is therefore less important than variable ergonomics and easy accessibility. In this way we were able to create a ‘floating’ seat bench seat, which allows you to glide comfortably onto the vehicle even from behind. It also offers improved ergonomics for single riders, regardless of leg length and height.” 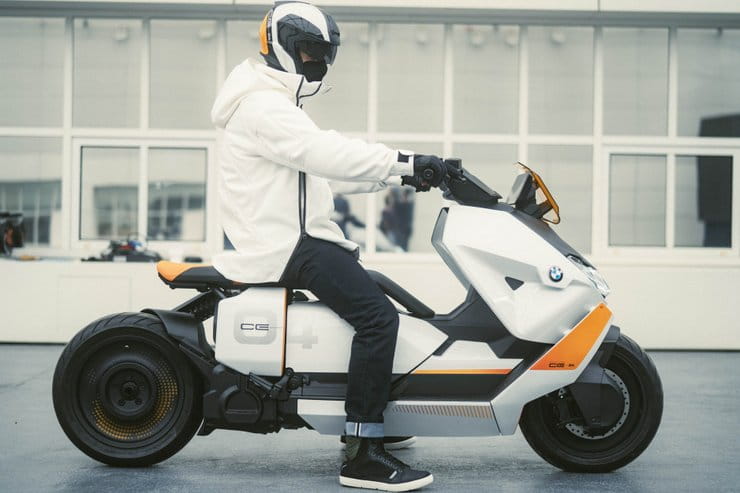 As you’d expect from a futuristic electric bike aimed at a young, city-dwelling user, there’s a strong focus on tech, with smartphone integration and a massive 10.25in TFT dashboard – similar to the one on the latest R1250 RT.

BMW has also developed riding kit to go with the Definition CE 04, further suggesting that this is aimed at newcomers to two wheels rather than existing motorcyclists.

“We deliberately wanted to create a fashionable look that is urban yet highly functional rather than classic motorcycle clothing. We want to develop products with which you can get off the vehicle and go about your everyday business hassle-free. At the same time, the rider equipment offers the protection you are used to from BMW Motorrad and even becomes part of the vehicle communication to the outside world,” says Julia Lein, Head of Rider Equipment Design at BMW Motorrad.

Ideas in the kit include a wireless phone charging pad built into the pocket of the parka, plus lights in its sleeves and hood to make the rider more visible in traffic.

Although BMW hasn’t yet announced a production schedule for the Definition CE 04, the firm’s documentation explains that it takes the ‘radical design of the Concept Link to production readiness’ and leaves little doubt that this machine will be in dealers in the near future. 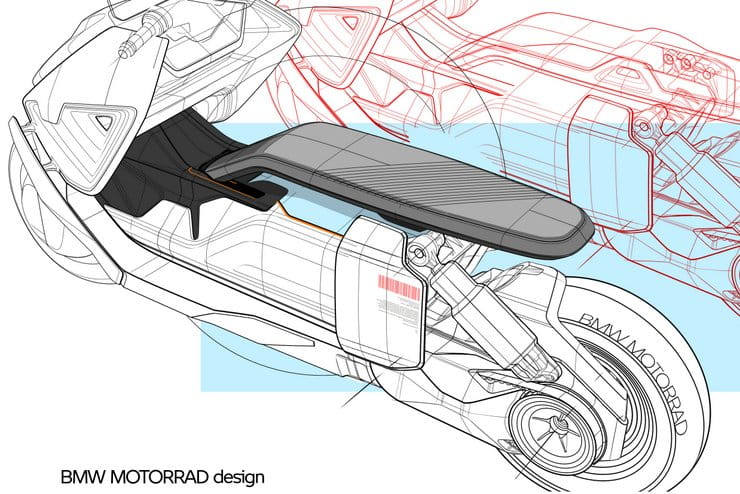